The Flowering of Henry Kissinger from the November 2, 1972 issue

I do not feel quite comfortable responding in your letters column to the recent criticism of my book (NYR, November 2), but I. F. Stone’s insulting review of Kissinger manages to distort my arguments in so total a fashion that I would like to address one or two aspects of his criticism.

What I resent is Stone’s assertion that my book “echoes American propaganda” about the Cold War and contains “apologetic tripe” about Kissinger’s own policy views. Particularly objectionable is Stone’s selective quoting to prove his point. To demonstrate my naïveté about US-Soviet relations, he cites a passage in which I depict the postwar years as “the frightful days of Stalin, the days of valiant Cold War confrontation, with the nations of the Free World locked in deadly combat with an ever-expanding Communist Bloc.” Stone also berates me for approving of the military research performed at the government-sponsored institutes which sprang up after the war. He quotes from a sentence in which I had said, “a whole generation of philosopher kings would be bred, mass-produced.”

Trouble is, both sentences come from an extended passage whose intent is obviously satirical (pp. 24-5). Mass-produce philosopher kings? How could Stone have taken that seriously? Even if he had missed the point of one passage, how could he have reconciled his view of it in the context of the entire book? For the reader’s information, the book is full of critical commentaries about Cold War ideologues and mystic anti-Communists, and it concludes that Kissinger’s present policy is “little more than unreconstructed Cold Warriorism. It is a tired repetition that the United States must bargain from ‘situations of strength’…little more than a formula for perpetuating confrontation all over the world.” (p. 125)

Next, there is Stone’s objection to my view that Kissinger’s brand of interventionism “cannot be described as nationalistic or self-centered.” This, Stone implies, is my view of other Cold Warriors as well. What Stone ignores is that a peculiar quality of detachment does distinguish Kissinger from almost every major foreign policy figure. It is one thing to see oneself, as do the Bundys and the McNamaras and Rostows, as agents of an American Manifest Destiny; it is quite another to see oneself as an arbiter of world history, as Kissinger does, responsible not to self or even to nation but to the entire international structure. The decisions resulting from Kissinger’s view are sometimes more prudent and judicious, but they are sometimes far more relentless and dangerous. The America-Firsters would not, did not, bring about the rapprochements with the Soviet Union and with China that Kissinger did; yet they would have given up the Vietnam war when they saw (as Kissinger also does) that from America’s standpoint it was unwinnable, no longer cost-effective. Kissinger prolongs the war because he sincerely—and wrongly—believes that America’s behavior in Vietnam serves the interest of world order.

On the whole, I believe the Kissinger view has resulted in a slightly better policy, though hardly a good policy, far from it; on the contrary, the present policy has the making of a backslide into classic Cold Warriorism strongly built into it. But there is a detachment, a conspicuous lack of jingoism about it. To quote myself again, “It is precisely this intellectual restraint which sets Kissinger apart from almost all other American policymakers of our time, men who persistently believe that the United States is a paragon of international virtue and that it has a perpetual civilizing mission in the rest of the world” (p. 32). A fair description of my view is that Kissinger is somewhat more restrained and subtle than most of his Cold War compatriots, though at bottom a Cold Warrior after all. That is not the impression of my view which emerges from Stone’s essay.

Then there is the passage which, in Stone’s words, “sounds more like a press release from Herbert Klein than a put-down from a campus radical” (since, in the midst of his tirade, Stone fingers me as “a young man who will go far…in American journalism,” I should make clear to him and to everyone else that Herb Klein’s is not a pinnacle to which I aspire). At one point, I have the consummate gall to point out that Kissinger is “not a man who blindly seeks power…. It is true that he has an unusual impulse toward power and authority, but it is an impulse that springs from a strong sense of personal mission….” Stone objects by saying that “Every imperialism in the last two centuries has broadcast mystical nonsense about its mission civilisatrice.” True. But it is highly rare for an individual, as distinct from an imperial system, to broadcast such nonsense in private conversations as well as in writings and other public pronouncements, and—what is more—to do so not only from the seat of power but also through years and years earlier when that individual was far from power and had only the slimmest hopes of ever achieving it.

Stone apparently sees Kissinger as little more than a master ingratiator who skillfully wound his way to the leadership of the American foreign policy establishment without much regard for what he might do when he got there, other than to implement, some version of a Sturm und Drang imperialism. My view is not so simplistic; nor does it apologize for Kissinger. As I tried to make clear in my book, the man who reaches power armed with a preconceived dogma and a passionate sense of mission is usually more dangerous than the man who seeks power for its own sake. The Kissinger who emerges from Stone’s portrait, the glad-handing Strangelove grinning through the apocalypse, a finger ever ready for the trigger, is far more transparent, far more dismissable, and far less worrisome than the real one. 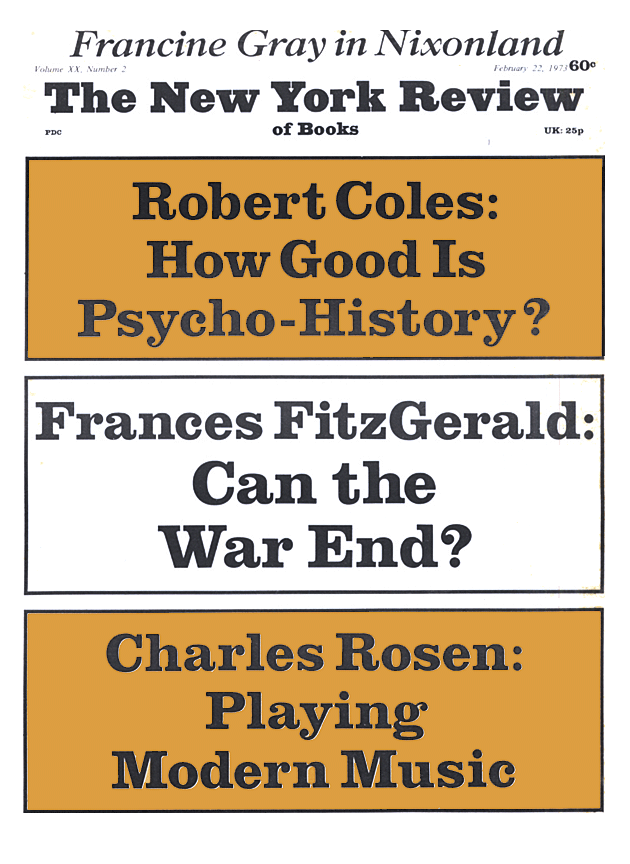 The Education of Henry Kissinger