Question: What do you think will or should be the next step? Will it be going to Geneva, or partial agreements with Jordan and Syria?

A.E.: I frankly think that the next step in our external policy should be internal. I think that we should put our country in a position in which it can negotiate, without inhibition, on a definite mandate for territorial compromise. The government should go to the people and say: “We cannot proceed beyond this Egyptian-Israeli disengagement agreement without having a clear understanding of what the principles are. We want a mandate for peace based on territorial concessions in all sectors, including Gaza and the West Bank.” We must get rid of this incubus which still hangs on us. Now the government does not regard itself as competent to evacuate any part of the West Bank without asking the people. That means we are left with the Syrian option.

Incidentally, they very nearly were not drawn in. There has been a publication of the 1948 discussion, which shows how narrow the verdict was. Syria came in also in solidarity with the Palestine Arabs, and although Egypt is a stronger element than the Palestine Arabs, it is the Palestine Arabs who are the determinative factor in the conflict. Even if you look at the history of the wars of 1948 and thereafter, you find that Egypt was spurred or jogged into the war by the Palestinians in 1948; in 1956 by the Fedayin; in 1967 it was the Fatah actions on the Syrian boundary which prevented what was otherwise a relative quiescence across the whole Middle Eastern scene.

We are not facing facts if we refuse to make this decision. The government can say we’ll do the best that we can to get such adjustments that are necessary for security, but the basic principle must be that we will give territory for peace in the West Bank, as in Sinai. Once the government is thus equipped, it can go to Geneva without any fear. It will still have to bargain but it will not have to have this complex.

Assuming this is done, then how do you envision a solution of the Palestinian problem? If the PLO agreed to recognize Israel and to accept a state in part of what they call Palestine is there a chance of coming to an agreement with them, or does it have to be through King Hussein?

Israel could only solve the Israeli part of the equation. We cannot liberate the Palestinians from solving some of their own predicaments and dilemmas, especially when they have caused some of them themselves. We can solve our part of the situation by doing two things: Adopting a clear policy of territorial concession in the West Bank and Gaza within a peace settlement, and, secondly, by clarifying that we will have dialogue with any Palestinian representation that accepts Israel’s status as axiomatic, that accepts [Security Council] resolutions 242 and 338, that talks about Palestine in addition to Israel and not about Palestine instead of Israel. Anybody who takes that policy we should be ready to talk with.

It was a major error, I think, of the cabinet last year not to accept the formulation put forward by some ministers, by Yariv and Shemtov, which would have stated positively what is now stated negatively. In other words, we shouldn’t simply state with whom we will not negotiate, but with whom we will negotiate.

Now, if you ask me will the PLO change its ideology and formulations in such a drastic way as to make itself eligible, that is their business. As with every movement of revolutionary violence, there are usually two schools of thought. There is one which says: let us stick to our texts, to our dogmas, to our fundamentalist rigidities, even if that means that we suffer on the diplomatic front. Others say: “If you want to enter the diplomatic arena, half a loaf is better than no loaf at all. We can go around indefinitely reaching no result if we stick to our text. So let us cut our losses and get what we can out of what remains.”

I think it’s in our interests to create that discussion. If we take these two steps then we still can’t ensure sanity on their side, but at least if there are moderates who would like to understand that Israel is a reality, and that that must be the point of reference, then the two things I have mentioned will encourage them—namely the Israeli government getting rid of its inhibitions of refusal, lack of competence to withdraw, and, on the question of dialogue or representation, laying down affirmative conditions, which in fact are not Israeli conditions, because they are part of the rules of the Geneva Conference.

I am saying to the Palestinians, if you want to talk to us, then pick up a telephone and dial Geneva 242-338. I’m afraid if they got the Israeli system, it would probably say, “All lines are busy,” but eventually they would get through.

Does your last statement mean that you are willing to give up what until now is a Jordanian orientation on the Israeli part, in which we see the solution to the Palestinian problem within the context of a solution with Jordan?

I still think it would be preferable for the state on our east not to be fragmented, but to constitute an entity on both sides of the Jordan, which after all is Palestine, too. I rather doubt whether Israel can have much ultimate control over the regime in the territory that it surrenders. It seems unrealistic to press upon Jordan a role that Jordan itself is no longer claiming. That is why we must see the post-Rabat situation as different from what it was before.

When Jordan said it wanted to represent the Palestinian cause alone, it was quite intelligent for other states to support that Jordanian claim. But when Jordan itself says, “We refuse,” it seems absurd for Israel to be the only country that insists on this as a restrictive condition. Therefore we should give up ultimative statements on the representation of the Palestinians. After all it is generally not for one country to tell another by whom to be represented.

—from an interview with the former Israeli minister of foreign affairs in New Outlook, published in Tel Aviv, September 1975. 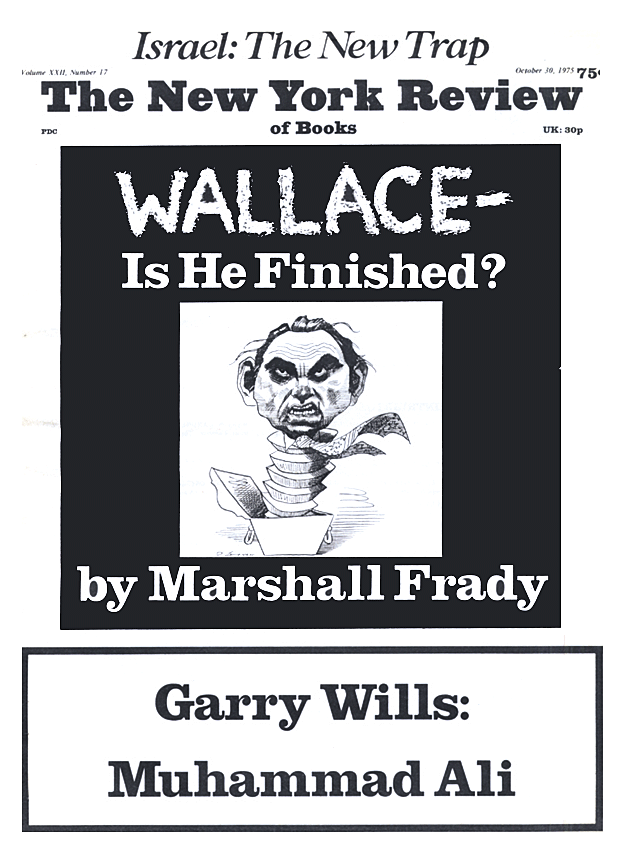