A printed listing of the works of George Balanchine may be set alongside the Köchel catalogue of Mozart: the works of choreographer and composer share many qualities.

Balanchine has been extremely prolific. For over fifty years his invention has been uninterrupted. There has been hardly a season since he was a boy of eighteen when he has not brought out something new in the nature of dancing.

A catalogue such as the one soon to be published* is not a visualization, yet even a list demonstrates the extraordinary variety and inclusiveness of Balanchine’s musical support and his unprecedented use of literature since the seventeenth century. A trained musician, he has been able to have always at his fingertips the quality of structure and sonority that fills his needs at a certain moment of development or necessity.

If he is to be compared with anyone in his time in the frame of his own talents, visual or plastic or musical, these must be Picasso and Stravinsky. Painting and musical composition, however, have had their universal acceptance for more than five hundred years, while classic academic dance, which issued from court shows in the seventeenth century and court theaters in the nineteenth, has only in our own century begun to compete on an equal level of popularity with the repertories of opera and orchestra.

He has specialized in pièces d’occasion, creating musical celebrations. Certain events summon or suggest appropriate answers. He has operated on the order of public official as well as very private experimenter. He has been profligate in stage production when patron-age was available, and parsimonious when decoration would have been superfluous or patronage was absent.

Balanchine issued from a school that inherited an imperial tradition. He left Russia at a time when the Soviet Union froze taste and attempted to stabilize artistic expression as a lowest common denominator. Entering the Diaghilev company in London at the age of twenty, he was plunged into an ambiance of extreme artistic license for which he had prepared himself by student experiments even before leaving Leningrad. When Diaghilev died, five years later, Balanchine attempted to continue the formula of elegant improvisation with whatever means were at hand. Russia was closed, the Soviet schools were no longer a source for recruitment, and the efforts of European impresarios proved haphazard and without institutional stability.

Balanchine decided to come to the United States as if the decision was almost a foregone conclusion, although there were other possibilities which might have been attractive had he not already had the experience of the Diaghilev years. When he came to America late in 1933 he founded a school which would commence teaching American dancers, toward forming an eventual American company. The School of American Ballet was conceived to be a national service school like the Imperial School in St. Petersburg, which held parity with the military and naval academies.

The first company Balanchine organized was called the American Ballet. Balanchine’s present company, founded in 1948, bears the name of the town that is its home, New York City, the cultural capital of the nation. The name of the school has remained the same. It is now a national service institution with students from forty states and more than a dozen nations. The city built Balanchine the theater he required. National foundations, recognizing their importance, gave his school and the New York City Ballet the support they needed.

His imperial ambitions as a servant of social democracy seem to have been fulfilled according to a logical schedule and a simple history. Reading the catalogue of his work, however, one may deduce some of the difficulties in the path, and along the way. The conditions of theatrical production, the size of companies, the presence or absence of patronage or money, the requirements of seasonal circumstance, all determine the state of repertory at a given moment. Just as certain ballets were abandoned and the effort plowed under, so certain expenditures in nerve and work have served to braid sinew toward further strength. Many ballets are no longer performed, yet parallels and portions can be recognized as resurrected in subsequent dances.

The present adoption of classic dance throughout the country continues to appear a mystery of those who have come to its performances relatively lately. In one form or another, however, formal stage dance has been available to be seen in America for more than six decades. But now, in large measure owing to Balanchine’s insistence on a rigorous profile and authoritarian practice, classic ballet is less confused with other forms of dance, and its training has advanced toward high professional criteria and performance. It is granted the status of peak virtuosity—as hard to attain and as quick to be recognized as the violin, the piano, or the Olympic categories.

One aspect of “modernism” has been its effort to annihilate history, to create an art without precedent, to renovate sensibility, to canonize the New. We have had more than a half century of newness, and suddenly it has aged. The classic ballet, born in the seventeenth century, combines historical legitimacy with contemporary manner. Its gestures are courtly, yet respond in accent, celerity, and syncopation to the colloquial cadence of the day. Balanchine has defined the “modern” direction of classic ballet.

Our century had licensed extremes of chaos and violence on the grandest scale known to man. The reflections in literature, music, and the plastic arts of two world wars scarred the whole structure of the imaginative process. The fragmentary, the nightmarish, the mad, exploited to their capacity of excess, have become mechanical, repetitive, dead-end.

The essence of ballet, on the other hand, is order. What one sees in Balanchine’s ballets are structures of naked order, executed by celebrants who have no other aim than to show an aspect of order in their own persons, testifying to an impersonal purity and a personal interest.

There has undoubtedly occurred what must be called an unfocused but active revival of religious interest in the West, seeking unfamiliar access to an absolute. It is not too much to consider a well-performed ballet a rite, executed and followed with intense devotion, that shares in some sort of moral figuration. The response of the audience to good dancing is a release of body and breath, a thanksgiving that is selfless, generous, complete, and leaves the spectator corroborated in the hope that, despite the world and its horrors, here somehow is a paradigm of perfection.

The consideration of last things, millennial factors, the approach of another century, wars and the rumor of war, surround us. We have a sense that the times we live in are extremely frail, that frailty is the single cohering net that connects. Nothing is more frail or transient than a ballet. Every action is evanescent, and after its enactment it is gone for good, or until a next time, when the same conditions obtain. Human bodies are frail. The design the dancers thread is also frail, and to a degree entirely imaginary. It can be learned, but never completely documented.

The whole operation of a ballet company is a microcosm of a civil condition. The frailty of its operation is that of any artistic or cultural institution in a civilization that prefers to spend its bounty on armament and consumer goods. However, a ballet company, existing in the interstices of the community, almost vaunts its hardy frailty. In an infinitesimal way, each good performance clears a small area of menace, and for the moment reminds us of the possible, which, if it is not perfection, approaches it.

In this process of asserting the importance of the classic dance, Balanchine acts as a public servant of order. He is a maker and teacher. The twentieth century has specialized in the metrics of time and space. Nobody before has ever danced as fast as a Balanchine dancer; no one has ever had such markedly separate structures of steps to dance. No dancers before have been obliged to analyze with their feet the kinds of musical composition that Balanchine has set for them. Only a dancer dancing can say for him, what he says to them. 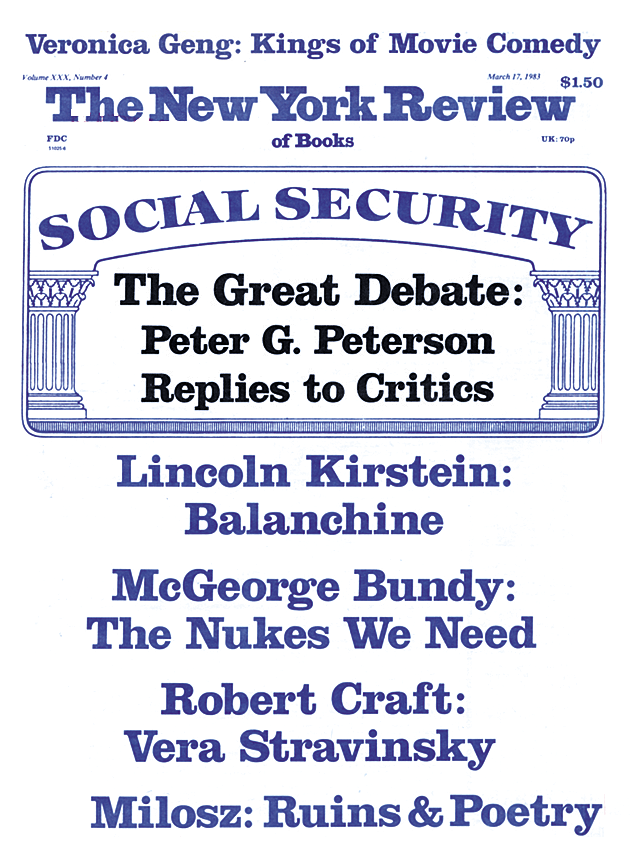 Lincoln Kirstein (1907–1996) was a writer and ballet critic. In 1946, together with George Balanchine, Kirstein founded the Ballet Society, which would soon be renamed The New York City Ballet. In 1984 he was awarded the Presidential Medal of Freedom.