Ringing the Button from the December 3, 1987 issue

I am dismayed that Elaine Feinstein quoted almost exclusively from a twenty-year-old book of mine in her review of An Arrow in the Wall: Selected Poetry and Prose by Andrei Voznesensky, edited by William Jay Smith and F.D. Reeve [NYR, December 3, 1987]. Feinstein comes upon Voznesensky’s early work (briefly excerpted in Selected Poetry from my 1967 collection Antiworlds) as if for the first time, calling it fresh, dazzling, conceptually fanciful, etc. Well, what about Voznesensky’s poetry of the last two decades, which is amply represented in the volume under review and which stands among his finest? Feinstein scarcely mentions it at all, save in connection with her “unease,” indeed, her “suspicion” regarding “Russian poets who are not seen to oppose the regime.” I challenge Feinstein to find a single poem in Selected Poetry that suggests some compromise of the author’s with the regime.

And what of Voznesensky’s present-day translators? Feinstein reserves her praise for the English versions done in the 1960s by W.H. Auden, Stanley Kunitz, and Richard Wilbur in collaboration with Max Hayward and myself. But she is silent about the splendid translations produced by the poets William Jay Smith and F.D. Reeve for the new Selected Poetry.

In her misguided zeal to present Voznesensky as an official figure, Feinstein commits two grave and damaging errors. He has never won a Lenin Prize, as she asserts. Nor can he be said to be “among the most centrally placed of Glavlit, or union, writers.” Glavlit is no union of writers. Glavlit (an abbreviation for Main Administration for the Safeguarding of Military and State Secrets in the Press) is the government censorship agency that has bedeviled Voznesensky throughout his life as a writer. These errors are consistent with the whole of Feinstein’s review which suffers from her manifest unfamiliarity with the Soviet literary scene and her gross underestimation of the place in Russian letters of this outstanding and brave poet.

It was not my intention to portray Voznesensky as a poet who compromises with the regime, but to question the usefulness of laying stress on his dissidence. Certainly he has had problems with censorship. The sentence quoted is misleadingly worded, so I am grateful to Patricia Blake for spelling out the functions of Glavlit. Voznesensky, like any writer published in the Soviet Union other than in samizdat, has always needed to be Glavlit approved. To say as much is not to insult him as an “official” writer. My point was that he and Bella Akhmadulina took a risk in publishing alongside writers in Metropol who were not so approved, and that in doing so they were gambling on the high place they hold in Russian letters. I am sorry to have been mistaken in the award of the Lenin Prize. 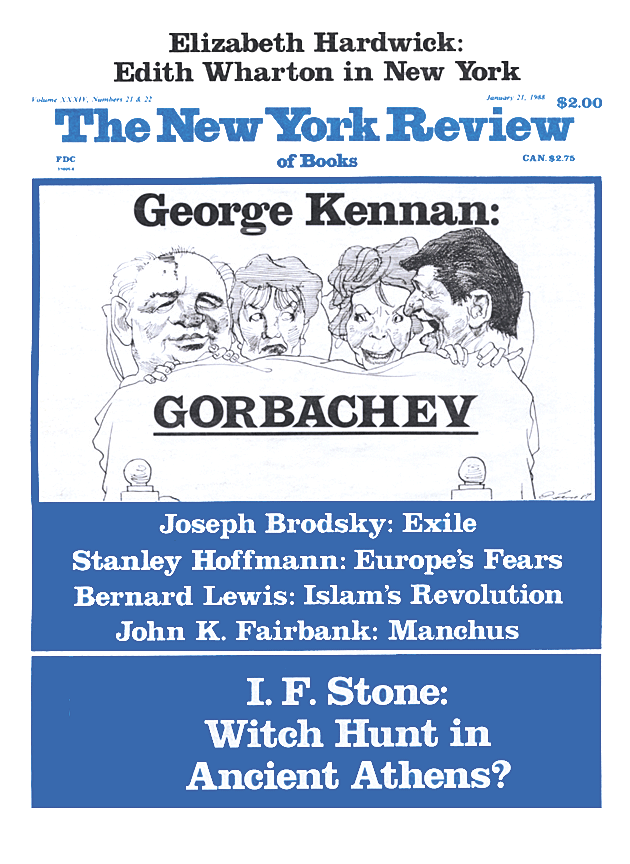