Havana—Thirty-five years and six weeks are gone since the day Fidel Castro came in glory to the great stage of history, and no one is left among the actors he met there except Jordan’s King Hussein and North Korea’s Kim II Sung, minor-league players then and now.

Castro burst from the wings surrounded by the guerrilla conquerors he called his barbudos, his men in beards. The beard was so sacred among the revolution’s symbols then that gossip had it that his brother and putative heir Raúl had to his ineffaceable shame failed in every effort to raise one and been forced to settle for a pigtail.

It seems odd and is perhaps portentous how rarely the visitor sees a beard in Cuba these days. Only Fidel Castro defiantly flourishes this boldest of his revolutionary banners and his beard has grown gray and long enough for the nesting of an owl. Castro must soon be, if he is not already, the last of the barbudos. He has outlasted most of his enemies with the unvarying exception of incumbent presidents of the United States. At sixty-seven, he has so far survived, however exiguously, the extinction of his friends, the Communists of Eastern Europe.

But he can go no more a-roving as he once did, with troops in Angola, engineers in Nicaragua, military engineers in Grenada. His world has shrunk down to his island, his votaries to his enduring and not quite unadoring people and his treasury down to a beggar’s. The central power is still his closely held own; but he is less and less able to exercise it as a force in advancing his country’s development or, what is more to the present point, arresting its protracted decay.

“When you cannot pay, you can no longer command,” one Cuban observed the other day in a voice at once aware of Castro’s faults and still persuaded that “if we lost this symbol,” all that followed would be chaos.

The truth about Cuba probably resides neither in the many who still recite the slogan-wearied faith nor in the fewer who are utterly disenchanted, but in those who have lost all their early illusions and yet cherish the revolution for making Cubans proud of themselves. “The revolution gave dignity to my country,” Reynaldo González, the novelist, can still remind the visitor.

“Dignity” is a word that recurs over and over in the voices of those Cubans for whom it has become the last romantic vision after all the follies of romance have withered. González knows the price of dignity. “I had a bad life in the Sixties and Seventies,” he remembers. “I went ten years without being allowed to publish a paragraph and now all my enemies who silenced me have chosen exile and now they are no longer known in Cuba.”

He soldiered away in those bad years as a publishing-house editor chafing for time to write for himself. At last a friend in the ministry of culture offered him a chance to escape to Barcelona as a cultural attaché. “I answered that I cannot write outside my own country. I wanted to change my job but I didn’t want to change my country. I am not in Cuba because I am a political man. I am in Cuba because I am a Cuban—a little animal of the tropics.”

“Whenever a Cuban intellectual leaves,” González reflects, “he puts before us the temptation of being a traitor. We paid a big price for ideology. We are now the son who threw away his fortune. We are back to the reality of being a very poor country.”

As custodian of Cuba’s film archive, González is occasionally invited to visit other Latin American nations. “These are the only countries we can compare ourselves to. Your America is too rich to measure us with. The Latin American countries are poor without dignity. The only thing we have to show the world is that dignity, the rest is wind.” And if there is any feeling that can be taken as near universal in Cuba, it is an exhaustion with politics and propaganda so total that visitors to the recent book fair scarcely glanced at the stalls of official publications and then lined up in a row fifty yards long for a chance to buy three privately issued books on Santería, the Afro-Cuban religion more and more venerated for its quasi-Catholic doctrines and its comparatively benign magical properties.

Otherwise, as González puts it, “we are choked with the crisis and when a human being is choking it is very difficult to ask him to stand up.” From Castro down through the Young Communist Leaguers who tend the ashes of his flame, there seems to be no answer to the crisis except to exhort ordinary Cubans to work harder than ever and, to take an example, mold fifteen cigars an hour instead of the ten that is their present quota. There is small chance that further escalations of rhetoric can rouse a people repetitively summoned to heroic struggle and now monotonously, although not quite unhealthily, fed off ration cards entitling them to beans and rice and to two pounds of fish every fifteen days, and with luck a bar of soap every six months. Even Fidel Castro seems tired of his larynx and untrusting of its residuary powers. He’s seldom sighted in the countryside; and there are days when officials who ought to know appear honestly baffled as to where he might be.

Cubans remain incorrigibly pleasant but subdued to degrees unthinkable thirty years ago. On a recent Saturday citizens of Pinar del Río gathered to watch their baseball team play Havana’s Metropolitans. The ballpark’s fences were lined with slogans exalting the massive participation in sports as the fundamental cause of success and proclaiming this as “the hour to shout revolution.” And yet there were fewer shouts for anything than we are used to hearing in stadiums if only from the vendors whose cries ring no more in Cuba, there being all but nothing available to vend. The joys in Cuba seldom rise above the somber ones of the melancholy heart.

All the same even the openly disillusioned here would not think to suggest the Miami exiles as a plausible alternative. Castro may be harder and harder to see; but Jorge Mas Canosa’s Cuban-American National Foundation can hardly be said to exist. Castro’s face is visible on just the single one of the multitude of billboards otherwise dominated by the martyred Che Guevara’s. The Catholic tradition reserves the worship of saints for the dead. To sense that Castroism is in peril of dying is not to surmise that Fidel Castro does not remain a symbol vividly alive. His aura shines above all his errors. He remains, as Clarendon said of Oliver Cromwell, the man who cannot be blamed without also being praised or praised without also being blamed. What is Fidel if not at once the cross that, bone-tired, the Cubans carry and the savior in whose name they carry it? 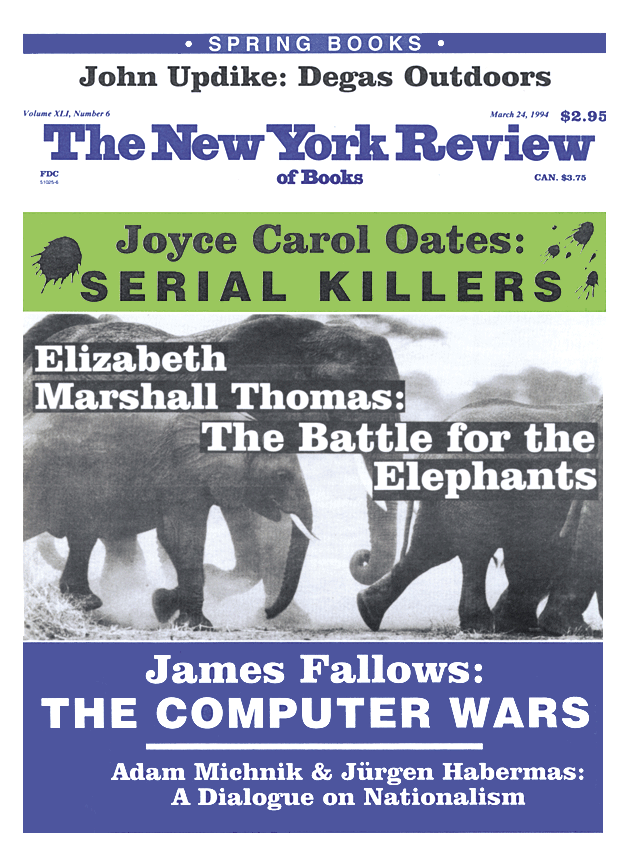