Last winter Serbian opposition leaders called on Slobodan Milosevic to respect their parties’ victories in the local elections held in November. Milosevic ignored them, and announced that the politicians loyal to him would remain in office. Night after night protesting crowds assembled in Belgrade chanting “Democracy.” While the government stations paid little attention to the demonstrations, Radio B-92, a small independent FM station, broadcast them live; no one doubts that B-92 had much to do with keeping the demonstrations going. Intent on stopping the antigovernment protests, Milosevic banned B-92. The government charged that the station was operating without a license and disconnected B-92’s transmitter.*

The station, whose signal hardly reaches beyond Belgrade, was organized in 1989 by Veran Matic, one of the present writers, as a politically independent alternative to Belgrade’s radio and TV stations, which are largely controlled by Milosevic and his allies. B-92 regularly broadcasts reports on the corrupt and dictatorial practices of the Milosevic regime, and Milosevic was waiting for a chance to close it down. By using the Internet, however, the station was able to fight back. Not only in Belgrade but throughout the world listeners could find B-92’s website and hear its broadcast in Serbian or English through the software program Real Audio, which makes it possible to hear reports on the Internet. “Virtual” protesters kept the non-violent demonstrations alive, even pelting cyber-eggs at state-run web pages.

International radio broadcasters augmented the domestic protest. The Voice of America, the BBC, and Radio Free Europe, all of which already had Serbian or local language services of their own, rebroadcast the reports carried on B-92 from transmitters abroad. The local Belgrade radio suddenly could be heard across Serbia.

Immediately after the station was banned, Ivor Roberts, the British ambassador, showed his support by visiting its offices on the fifth floor of a run-down socialist-style building in downtown Belgrade. Carl Bildt, then the international High Representative in charge of the civilian side of the Dayton peace agreement in Bosnia, the US State Department, and Kati Marton of the Committee to Protect Journalists also made protests on behalf of the station.

Internet technology and international pressure proved to be effective weapons against Milosevic. After two days he withdrew his edict forbidding B-92 to broadcast. It seems likely that he was convinced that lifting the ban would win Western praise and deflect international attention from his electoral fraud. Immediately afterward, B-92 was able—through funds provided equally by the BBC, the British Foreign Office, USAID, the European Union, and George Soros’s Open Society Foundation—to gain access to a satellite that linked twenty-eight independent local radio stations, covering 70 percent of the Federal Republic of Yugoslavia, which is now made up of Serbia and Montenegro. Its broadcasts by satellite continue.

B-92 is now also starting a television network linking the small private TV stations that have been broadcasting throughout the former Yugoslavia. It will again make use of a satellite, the easiest way to hook up remote TV stations in mountainous terrain, for example parts of Kosovo or Bosnia. (There is currently no independent station in Serbia’s southern province of Kosovo, mostly inhabited by ethnic Albanians.) Since it was founded in 1989, B-92 has tried to encourage peaceful democratic change by linking independent media, local nongovernment organizations, and international institutions in support of the antiwar movement, and by calling attention to the plight of refugees. The station has also provided air time for minority and women’s organizations, and for many arts and literature programs.

In the former Yugoslavia, television is today more powerful than military weapons. And it is the one weapon the Balkan warlords who now preside over the temporary peace have refused to surrender. The NATO commanders showed they realized this when on October 1 they seized the Bosnian Serb television transmitters controlled by Radovan Karadzic. This bold act will amount to little, however—and will seem a foolhardy risk of soldiers’ lives—unless the Western nations pursue a coordinated and sustained policy to support independent radio and television not only in Bosnia but, just as important, in neighboring Serbia and Croatia.

Almost two years since the signing of the Dayton peace agreement, a consistent US or NATO policy supporting independent television has yet to emerge. Independent newspapers and magazines are sold in the former Yugoslavia but they are expensive and hard to distribute, and even where they are available, there is no strong tradition of an independent press. Newspapers and other publications have had only a marginal part in forming public opinion. Most people depend on television for information. A Western policy supporting independent radio and television would give the former Yugoslavia a much better chance of establishing democracy; if the people there do not have access to accurate information, efforts by Washington and its European allies to build a peace will probably be futile.

Even more than the police, the state-run station Television Serbia has been central to Milosevic’s career. It was by taking control of state television from a rival faction in the Communist Party that he came to power in 1987. By skillfully using television, this colorless party apparatchik was able to transform himself into a fiery nationalist leader. Shrewd and inflammatory use of television was crucial for preparing for the wars in Croatia and Bosnia. Program after program stirred up hatred against non-Serbs, while denouncing those Serbs who refused to follow the Milosevic line and were calling for peaceful change.

At Belgrade’s first mass opposition rally, on the eve of the war in 1991, protesters demanded without success that Milosevic relinquish his control of state television. Two of the demonstrators were killed by the police. In 1995 Milosevic took over Studio B, Serbia’s biggest independent television station, after its journalists had either resigned under pressure or been bought off by the regime’s own television station.

Last winter, after three months of demonstrations against Milosevic, Studio B broke away from control of the bureaucrats he had installed to run it and became independent. That situation has since changed, partly as a result of Milosevic’s success in destroying the coalition that had organized the demonstrations against him. The coalition, known as Zajedno—Together—was led by Zoran Djindjic, the Democratic Party leader who became mayor of Belgrade after Milosevic yielded and honored the local election results, Vuk Draskovic, the nationalist leader of the Serbian Renewal Movement, and Ms. Vesna Pesic, a liberal legislator and former human rights activist. Milosevic recently succeeded in breaking up their alliance by making a deal with Draskovic, and then forcing Djindjic out of office as mayor. Studio B has meanwhile reverted to control by the tactical (but unofficial) coalition between Milosevic and Draskovic.

In Croatia, the Tudjman government used television constantly to create support for its war against the Serbs. Croatian state television is slicker and more refined than Serbia’s, but it serves the same function: the nightly news broadcasts extol the regime and its leader, and openly advocate his policies, including an ethnically pure Croatian state, which two years ago meant the expulsion of Serbs living in Croatia. In the Croat-controlled part of Bosnia-Herzegovina, Croats in charge of television circulate lies and slander to defame their Muslim countrymen. It does not matter that such practices violate the Dayton principles, and have been specifically banned by subsequent agreements.

So far the biggest display of civic mass protest in Croatia, which took place this winter at the same time as the demonstrations in Belgrade, was against Tudjman’s attempt to assert control over Radio 101, Zagreb’s most popular independent radio station. Tens of thousands of people rallied in support of the station as it was about to be taken over by Tudjman’s party. The station has kept its independence, but it may not be able to do so for long.

In Communist Yugoslavia, state television was not just a means of propaganda. For most people it simply was a basic fact of life. After the wars in Serbia, Croatia, and Bosnia, the respective state channels have enormous influence over public opinion. As Milos Vasic of the independent Belgrade weekly Vreme remarked about the ways that Television Serbia had helped to raise tensions before the war, if the Ku Klux Klan had seized control of the US media, Americans, too, would become racists and nationalists.

The Western nations, including the US, still lack a long-term strategy for encouraging democracy in Serbia, Croatia, and Bosnia. They should be helping independent radio and television by making it possible to set up transmitters and other equipment and to obtain programs made abroad. (International attempts to create an independent Bosnia-wide television network so far have failed to have much effect. A project to do so, proposed by American and European officials and partly supported by foreign aid funds, has had trouble carrying out ideas that were too loosely and grandly conceived and that turned out to be impractical.) Only a sizable independent station—one that does not appear imposed from the outside—could rival state television for the attention of the public.

The Clinton Administration should adopt a new policy of promoting support of independent television stations by Western governments, as well as by private companies committed to the free circulation of information. TV news executives such as Ted Turner could, with little investment, contribute to technical support for such stations. Since the Internet is central to the operation of B-92, computer executives such as Bill Gates could appropriately support the use of the new technology to foster democracy. (George Soros is already the biggest private contributor both to supporting independent media in former Yugoslavia and to building a civil society there.)

American policy in Bosnia has often seemed a somewhat frantic attempt to catch up with events just when the situation is about to get out of hand. NATO commanders seized the TVtransmitters controlled by Karadzic and turned them over to Biljana Plavsic, the President of Republika Srpska, whom they are trying to support, privately arguing that it was legitimate for them to take equipment from an indicted war criminal and allow her to use it to reach the Bosnian (Serb) public. But such measures should be accompanied by aid to the independent television and radio stations that will allow different opinions to circulate throughout Bosnia’s two halves.

If steps are not taken to spread information and to increase democratic participation in the politics of Bosnia and elsewhere in former Yugoslavia, the Dayton accords will fail; the entire region, which now must be seen as including not only most of the successor states of former Yugoslavia but Bulgaria and Albania as well, will become even more unstable. Western investment in the training, technology, and other assistance needed by independent radio and television stations will not by itself resolve the tragic conflict in former Yugoslavia. But it could greatly help in doing so and it would be far less costly than a renewed war, or than maintaining NATO soldiers in Bosnia indefinitely. 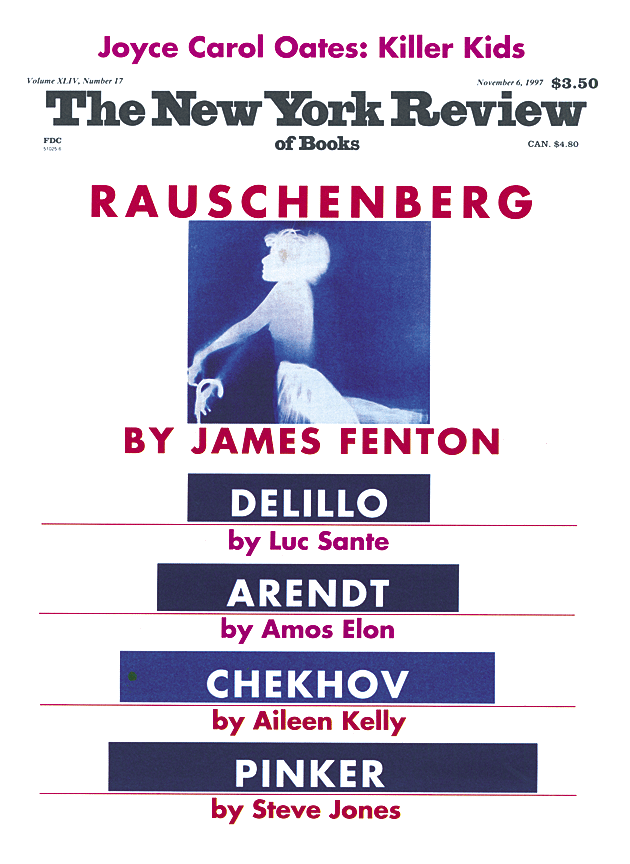 Laura Silber is a reporter for the Financial Times and the coauthor of Yugoslavia: Death of a Nation. (November 1997)

Veran Matic is editor-in-chief of Belgrade Radio B-92. Before co-founding the Radio in 1989, he worked as an independent journalist and he has also started a publishing house. (November 1997)