Following is the text of a letter from fifty-two former senior British diplomats to Tony Blair, published under the above headline in The Guardian of London, Tuesday, April 27, 2004

We the undersigned former British ambassadors, high commissioners, governors and senior international officials, including some who have long experience of the Middle East and others whose experience is elsewhere, have watched with deepening concern the policies which you have followed on the Arab–Israel problem and Iraq, in close cooperation with the United States. Following the press conference in Washington at which you and President Bush restated these policies, we feel the time has come to make our anxieties public, in the hope that they will be addressed in parliament and will lead to a fundamental reassessment.

The decision by the US, the EU, Russia and the UN to launch a “road map” for the settlement of the Israel/Palestine conflict raised hopes that the major powers would at last make a determined and collective effort to resolve a problem which, more than any other, has for decades poisoned relations between the west and the Islamic and Arab worlds. The legal and political principles on which such a settlement would be based were well established: President Clinton had grappled with the problem during his presidency; the ingredients needed for a settlement were well understood and informal agreements on several of them had already been achieved. But the hopes were ill-founded. Nothing effective has been done either to move the negotiations forward or to curb the violence. Britain and the other sponsors of the road map merely waited on American leadership, but waited in vain.

Worse was to come. After all those wasted months, the international community has now been confronted with the announcement by Ariel Sharon and President Bush of new policies which are one-sided and illegal and which will cost yet more Israeli and Palestinian blood. Our dismay at this backward step is heightened by the fact that you yourself seem to have endorsed it, abandoning the principles which for nearly four decades have guided international efforts to restore peace in the Holy Land and which have been the basis for such successes as those efforts have produced.

This abandonment of principle comes at a time when rightly or wrongly we are portrayed throughout the Arab and Muslim world as partners in an illegal and brutal occupation in Iraq.

The conduct of the war in Iraq has made it clear that there was no effective plan for the post-Saddam settlement. All those with experience of the area predicted that the occupation of Iraq by the coalition forces would meet serious and stubborn resistance, as has proved to be the case. To describe the resistance as led by terrorists, fanatics and foreigners is neither convincing nor helpful. Policy must take account of the nature and history of Iraq, the most complex country in the region. However much Iraqis may yearn for a democratic society, the belief that one could now be created by the coalition is naive. This is the view of virtually all independent specialists on the region, both in Britain and in America. We are glad to note that you and the president have welcomed the proposals outlined by Lakhdar Brahimi. We must be ready to provide what support he requests, and to give authority to the UN to work with the Iraqis themselves, including those who are now actively resisting the occupation, to clear up the mess.

The military actions of the coalition forces must be guided by political objectives and by the requirements of the Iraq theatre itself, not by criteria remote from them. It is not good enough to say that the use of force is a matter for local commanders. Heavy weapons unsuited to the task in hand, inflammatory language, the current confrontations in Najaf and Falluja, all these have built up rather than isolated the opposition. The Iraqis killed by coalition forces probably total 10–15,000 (it is a disgrace that the coalition forces themselves appear to have no estimate), and the number killed in the last month in Falluja alone is apparently several hundred including many civilian men, women and children. Phrases such as “We mourn each loss of life. We salute them, and their families for their bravery and their sacrifice,” apparently referring only to those who have died on the coalition side, are not well judged to moderate the passions these killings arouse.

We share your view that the British government has an interest in working as closely as possible with the US on both these related issues, and in exerting real influence as a loyal ally. We believe that the need for such influence is now a matter of the highest urgency. If that is unacceptable or unwelcome there is no case for supporting policies which are doomed to failure. 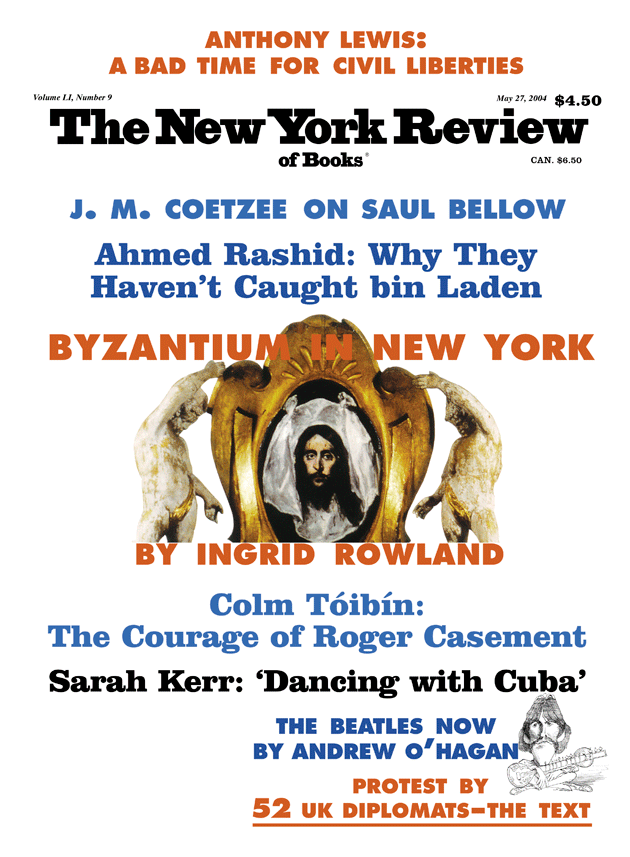 The Middle East: What Next?

The Middle East: What to Do?

Blundering in the Mideast with Prince Bandar

The Middle of the Night: the Hands