Even those who think they know all there is to know about the Brontë family will likely be surprised by many of the documents and artifacts included in “Charlotte Brontë: An Independent Will,” currently on view at New York’s Morgan Library. Many of these revelations have to do with size and scale, with the contrast between the breadth and depth of Charlotte Brontë’s imagination and her physical delicacy, between the forcefulness of her and her siblings’ prose and the neat, astonishingly minuscule handwriting (not unlike Robert Walser’s microscript) in which she, Emily, and their brother Branwell penned their early work.

The first thing we see, on entering the gallery, is a glass case containing one of Charlotte Brontë’s dresses and a pair of her shoes, objects that make us acutely aware—more effectively than any description or photograph of these items could—of how diminutive (by modern standards) this strong and resilient woman was. Tiny books and magazines, including a copy of a satirical play about the art of writing, The Poetaster, that Charlotte wrote when she was fourteen, offer a view of the way in which the Brontë children saw writing as an imaginative game; to them, these miniature, handmade volumes—meticulously printed, and in some cases illustrated with watercolors—were, essentially, toys. Included also is the manuscript of a poem that Emily Brontë wrote when she was nineteen, a work of three hundred words, divided in forty-six lines, on a page that is only ten centimeters tall. 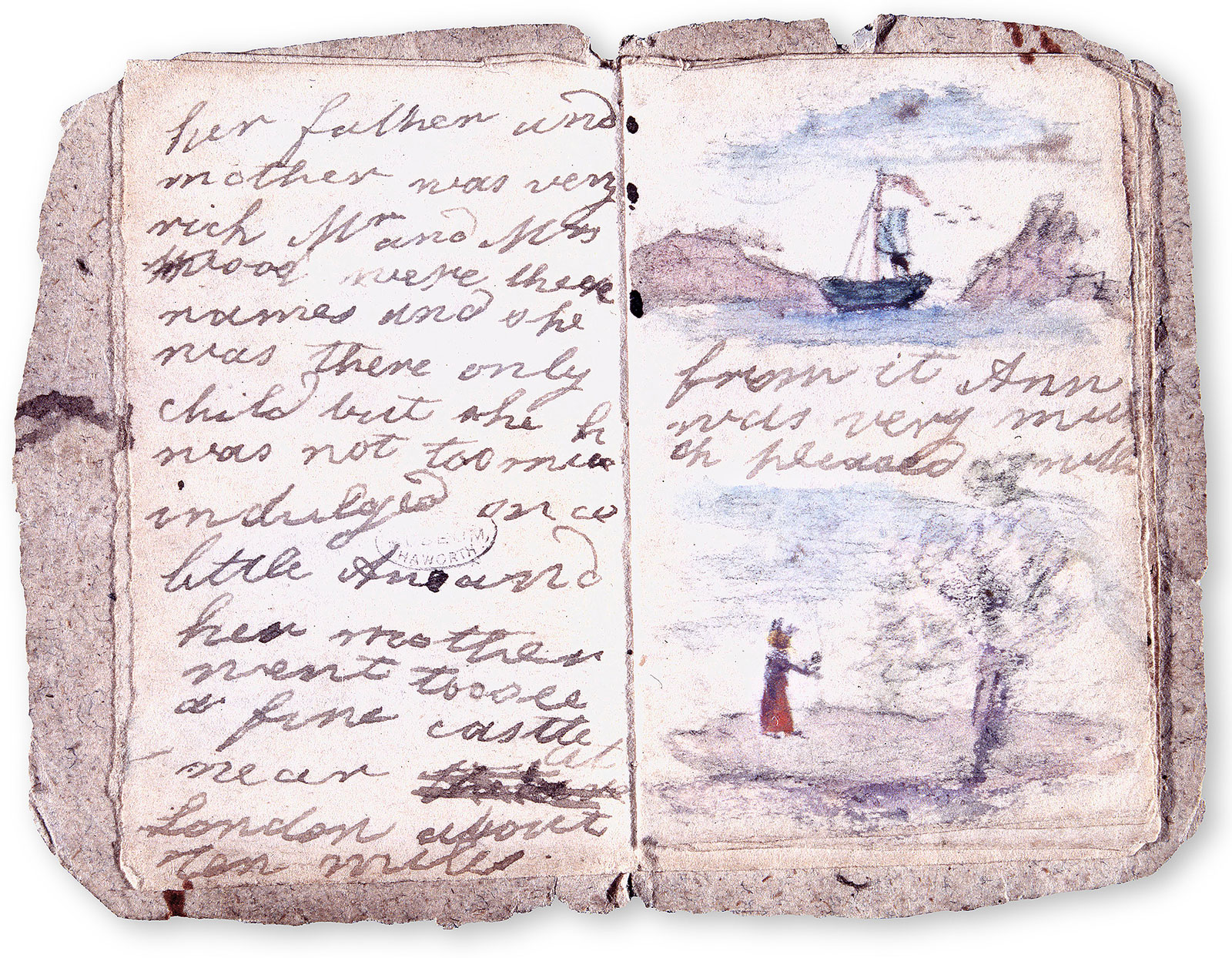 Charlotte Brontë's earliest surviving miniature manuscript book with watercolor drawings; “There once was a little girl and her name was Ane [sic],” circa 1828 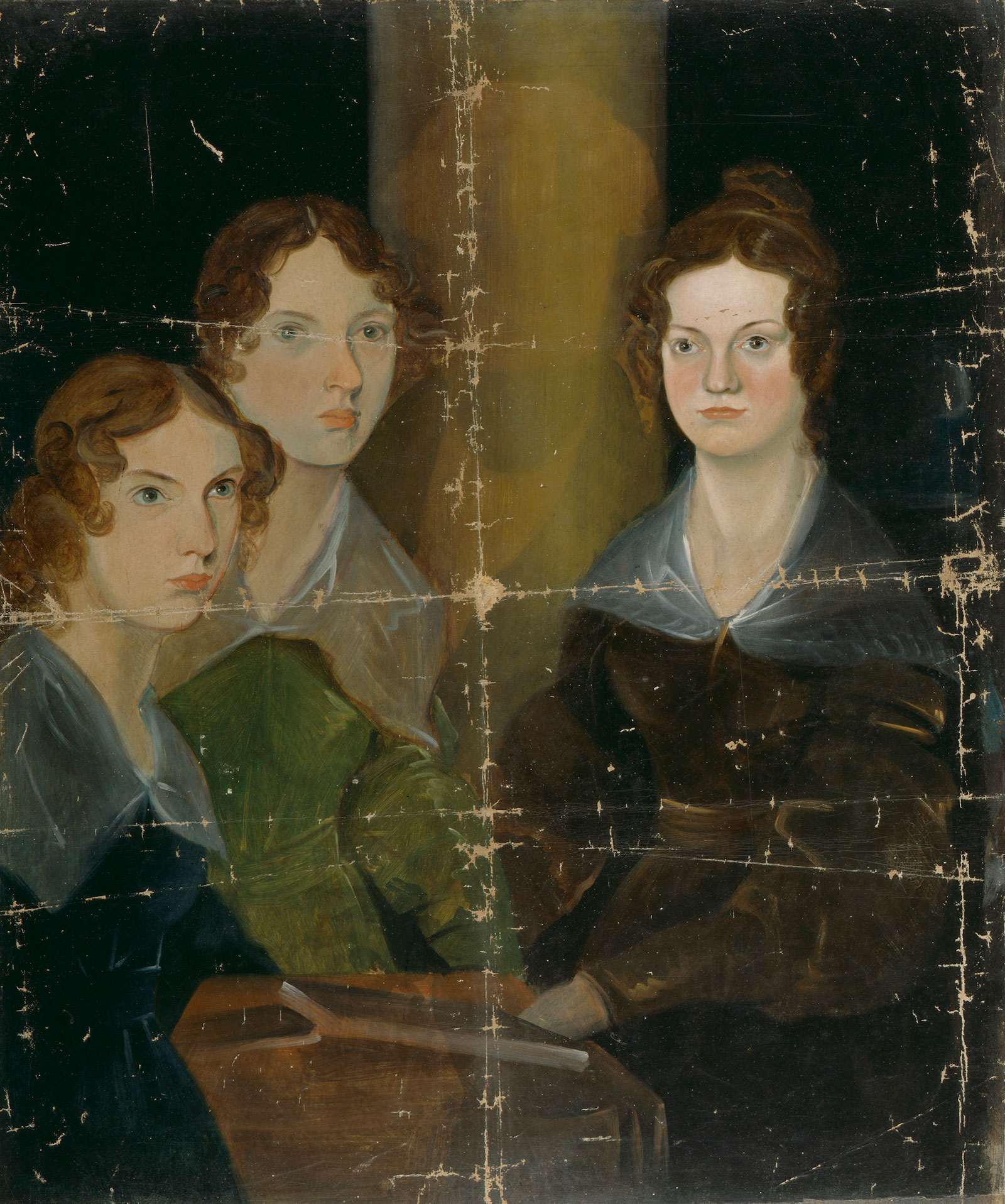 Branwell Brontë: Portrait of Anne, Emily, and Charlotte Brontë, circa 1834 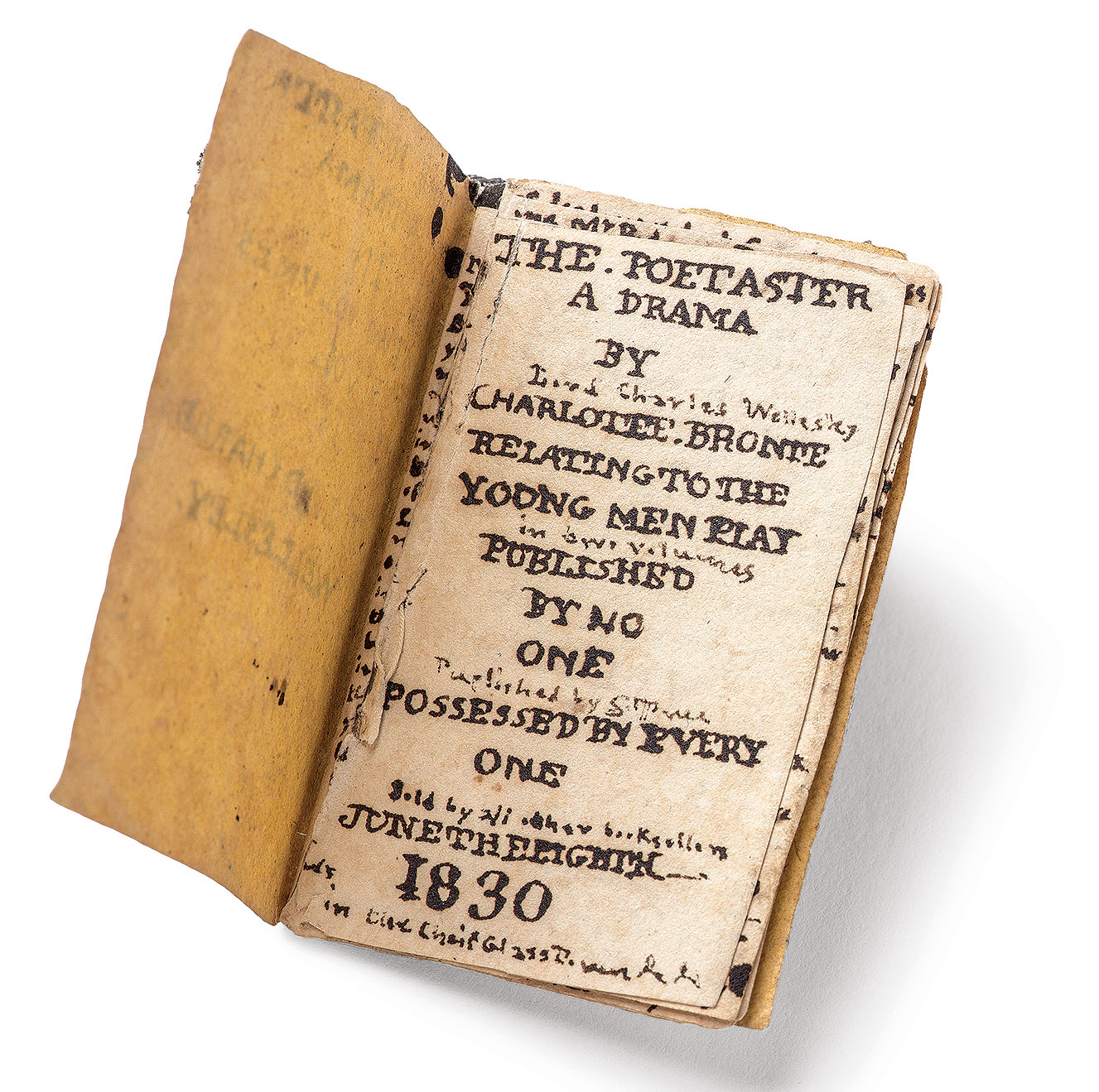 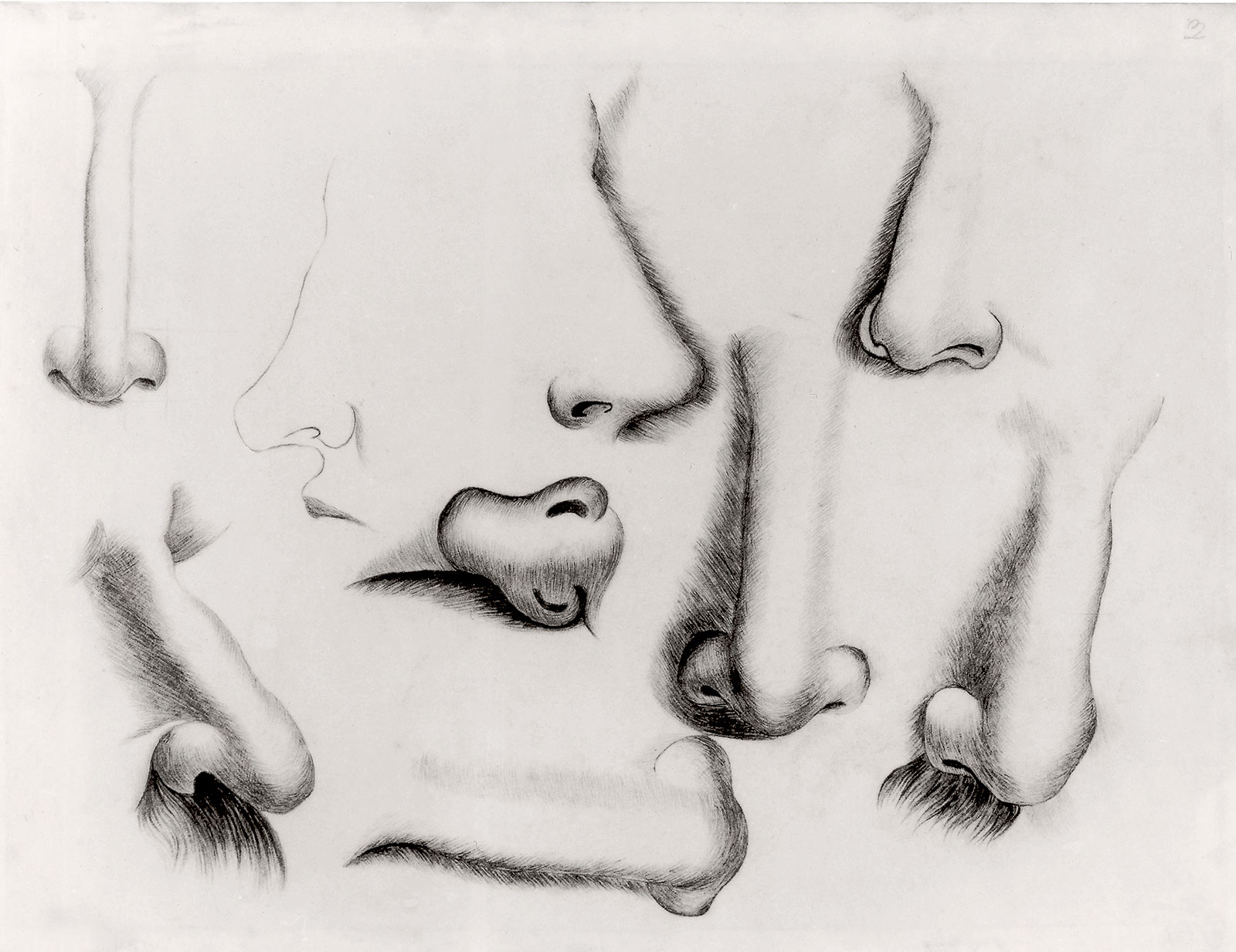 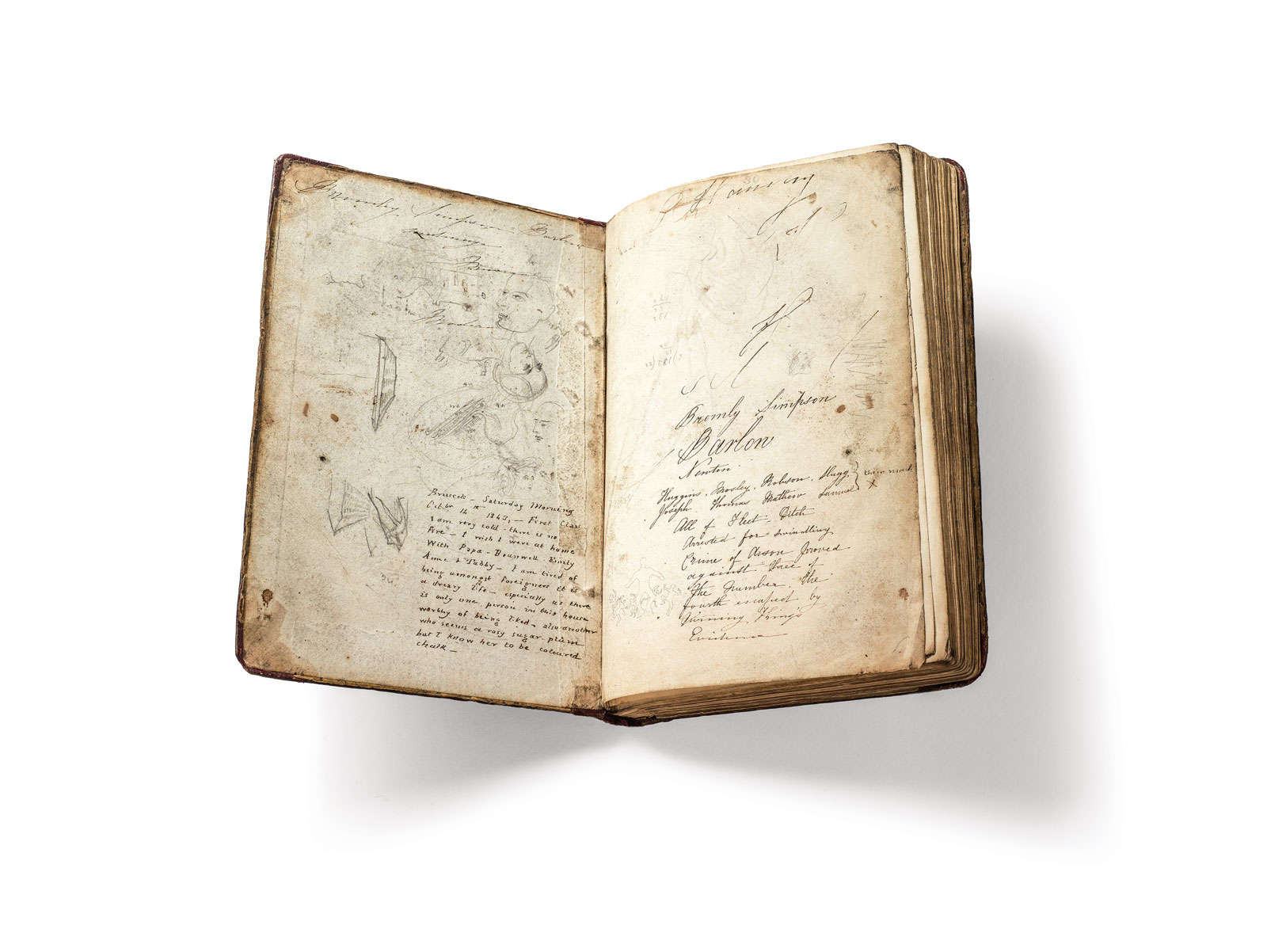 Charlotte Brontë's doodles in her copy of the General Atlas of Modern Geography, circa 1830 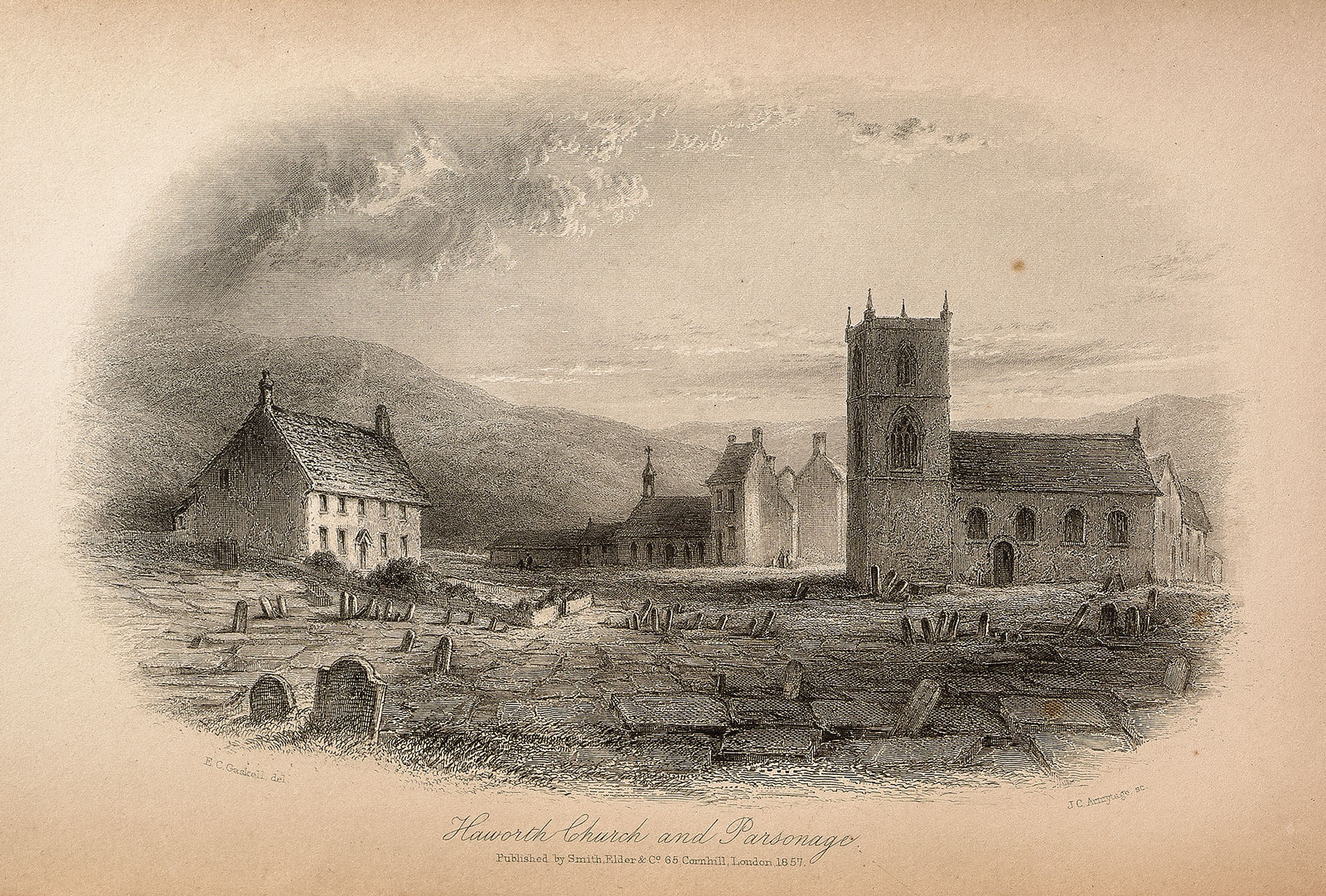 Elizabeth Gaskell's engraving of Haworth parsonage and churchyard, frontispiece to The Life of Charlotte Brontë, vol. 2, 1857 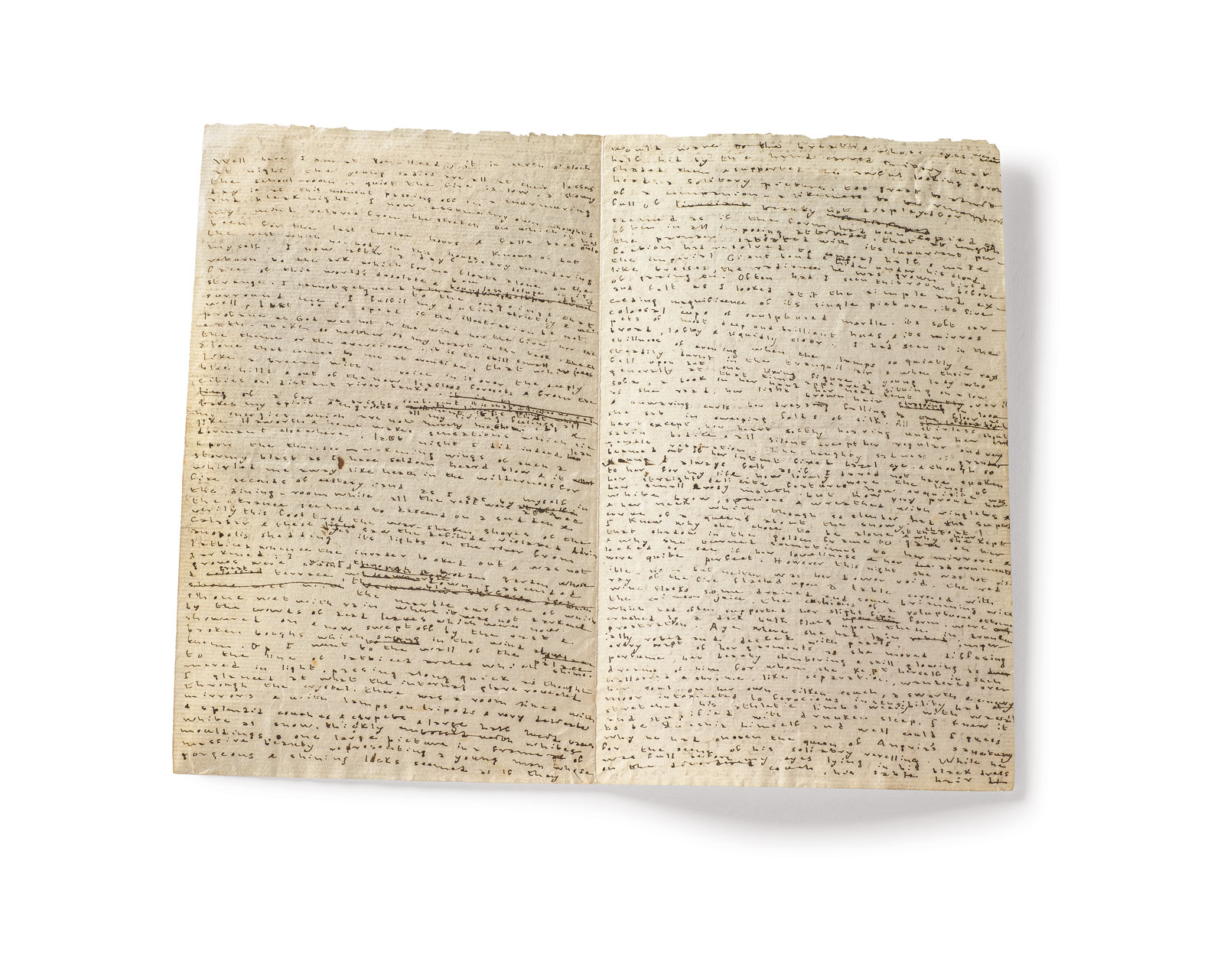 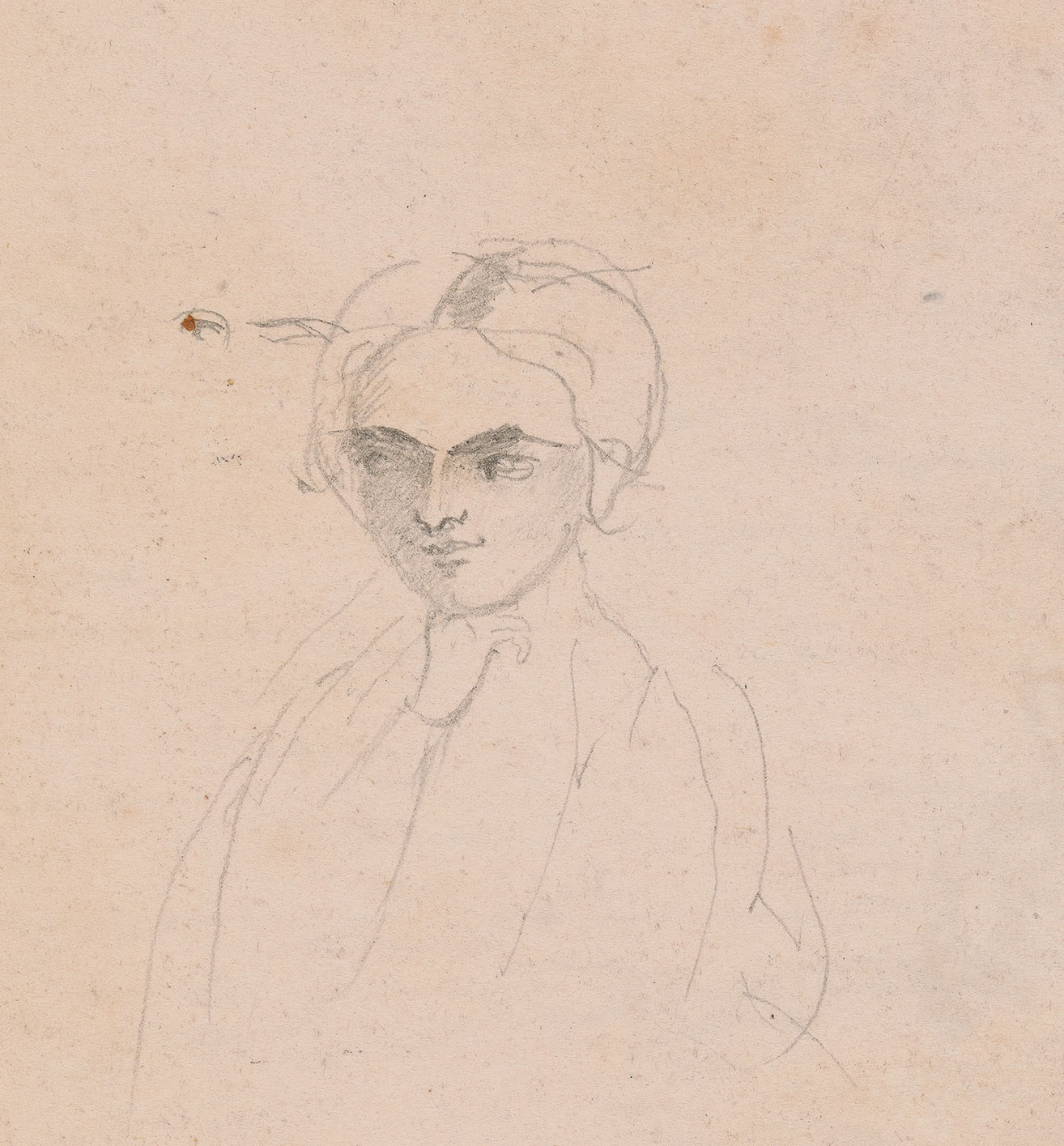 A pencil sketch by Charlotte Brontë, possibly a self-portrait, on a blank page in her school atlas, circa 1830

Anne Brontë’s Bible and a group of family prayer books provide a sense of the intensely religious atmosphere in which the siblings were raised by their clergyman father. Other volumes—a world atlas that Charlotte decorated with doodled portraits of women, Thomas Bewick’s History of British Birds—increase our understanding of what the family read, and of the ways in which they supplemented the sparse and punitive education that Charlotte and Emily received at the nightmarish boarding school that appears, thinly disguised as Lowood, in Jane Eyre. Among the most affecting documents are letters and journal entries in which Charlotte expresses the unhappiness and loneliness she experienced as a teacher (“neither is my heart in the task, the theme or the exercise”), as a governess (“I am miserable when I allow myself to dwell on the necessity of spending my life as Governess”), and as a student in Brussels (“I am tired of being amongst foreigners it is a dreary life”).

Curated by Christine Nelson, the exhibition reinforces our notions of Charlotte Brontë’s daring, ambition, and courage, and of the tragic circumstances over which she prevailed. In one letter, Charlotte describes the 1848 visit to London during which she and her sisters Emily and Anne revealed to her publishers that the novels they had submitted under male pseudonyms (Currer, Acton and Ellis Bell) had in fact been written by women (“Mystery is irksome, and I was glad to shake it off”). The publisher was initially surprised, but nevertheless decided to show the sisters around London, introducing them not as authors but as his “country cousins” the Misses Brown. In another, bordered in black, Charlotte mourns her brother’s death.

Taken from the frontispiece Elizabeth Gaskell’s The Life of Charlotte Brontë, a brooding, romantic engraving of Haworth Parsonage, where the Brontës grew up, positions the family home between a cemetery in the foreground and the dark moors in the distance. A famous group portrait by Branwell Brontë, done when he was fourteen, portrays his three rather pretty sisters looking fully as serious—and as haunted—as we imagine them to be. The painting is all the more haunted when one realizes that Branwell painted himself out of it. Early editions of the novels that the three sisters wrote, Charlotte’s marriage certificate (at the age of thirty-seven, she wed Arthur Bell Nicholls, her father’s curate) and her last will and testament provide an illuminating overview and a moving visual mini-biography of this extraordinary artist.

“Charlotte Brontë: An Independent Will” is on view at New York’s Morgan Library through January 2, 2017.

Francine Prose is Distinguished Writer in Residence at Bard. Her latest novel, The Vixen, was published last June. (March 2022)

When Librarians Are Silenced

A librarian in Kansas City, Missouri, was arrested simply for standing up for a library patron’s free speech rights at a public event featuring a former US diplomat.