In the main gallery of Oxford’s Ashmolean Museum, a big Jeff Koons exhibition is causing a stir. But among the many delights of this museum are the small, free exhibitions, tucked away from the crowds, that display their more unusual collections. “Plum Blossom and Green Willow: Surimono Poetry Prints” is one of these, which, with its array of nineteenth-century Japanese woodblock poetry prints, transports us to another world.

A quiet revelation to visitors who are primarily attuned to the arts of the West, this is a strange and lovely show, accompanied by clear labels that usefully explain the context of the genre and teach us how to “read” these rare woodblock prints—to understand the relation of the work to the poems inscribed on the prints and the meaning of the figures shown, with their references to ancient traditions. Thus an elderly man with his umbrella stopping to watch a frog trying to leap up a tree, is, we learn, Ono no Tōfū, a prominent tenth-century statesman and poet, the founder of Japanese calligraphy and the anecdote concerns a low moment when he decided to give up calligraphy, but watching the frog’s perseverance and eventual success, he vowed to carry on. In another print, a tightrope walker teetering precariously on her rope belongs to a series called “The Six Immortal Poets,” where great writers of the past were illustrated by people of the present. The tightrope walker represents the ninth-century Buddhist poet Henjō, referring to a famous poem in which he recorded his “fall,” his breaking of the vow of chastity. 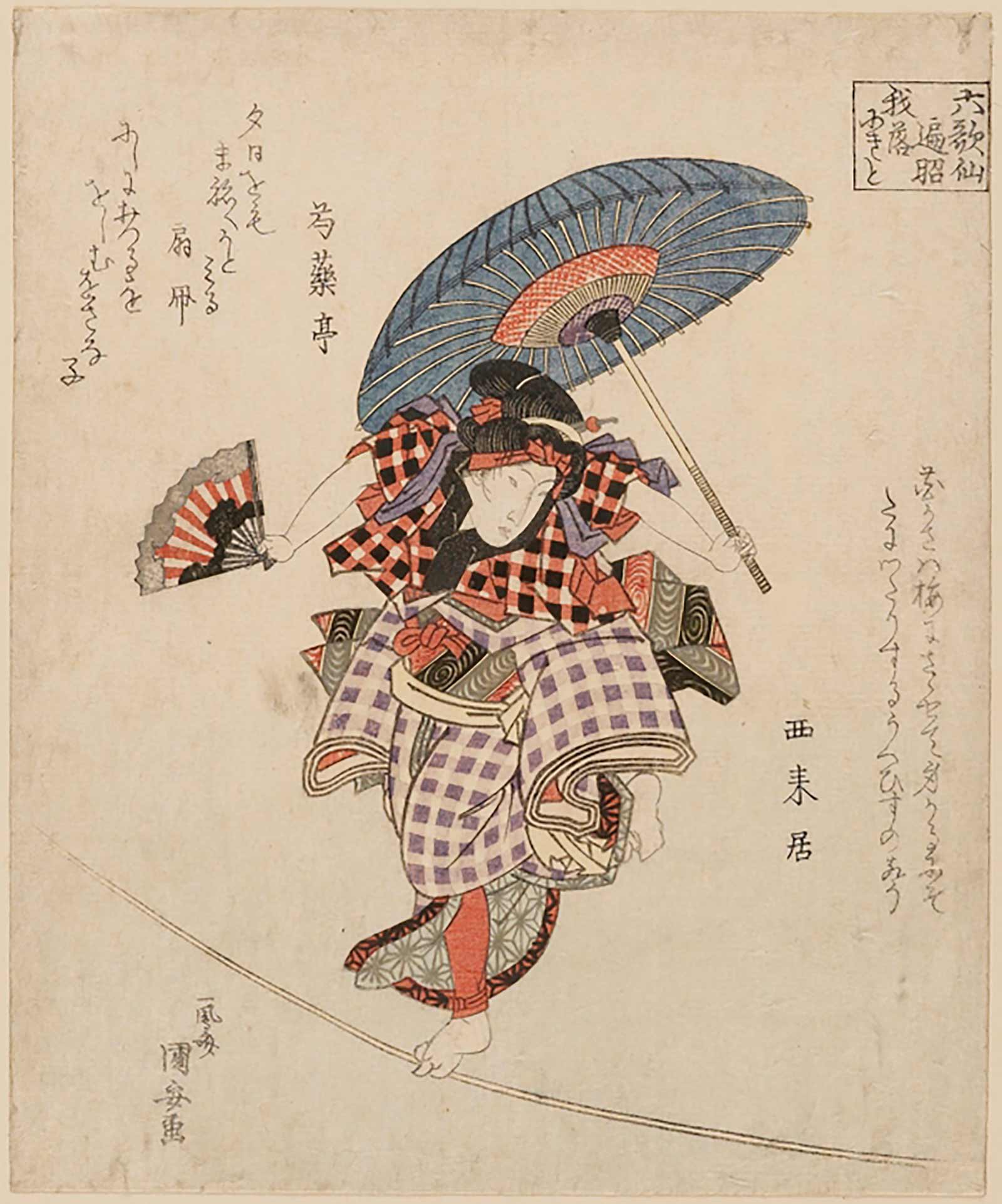 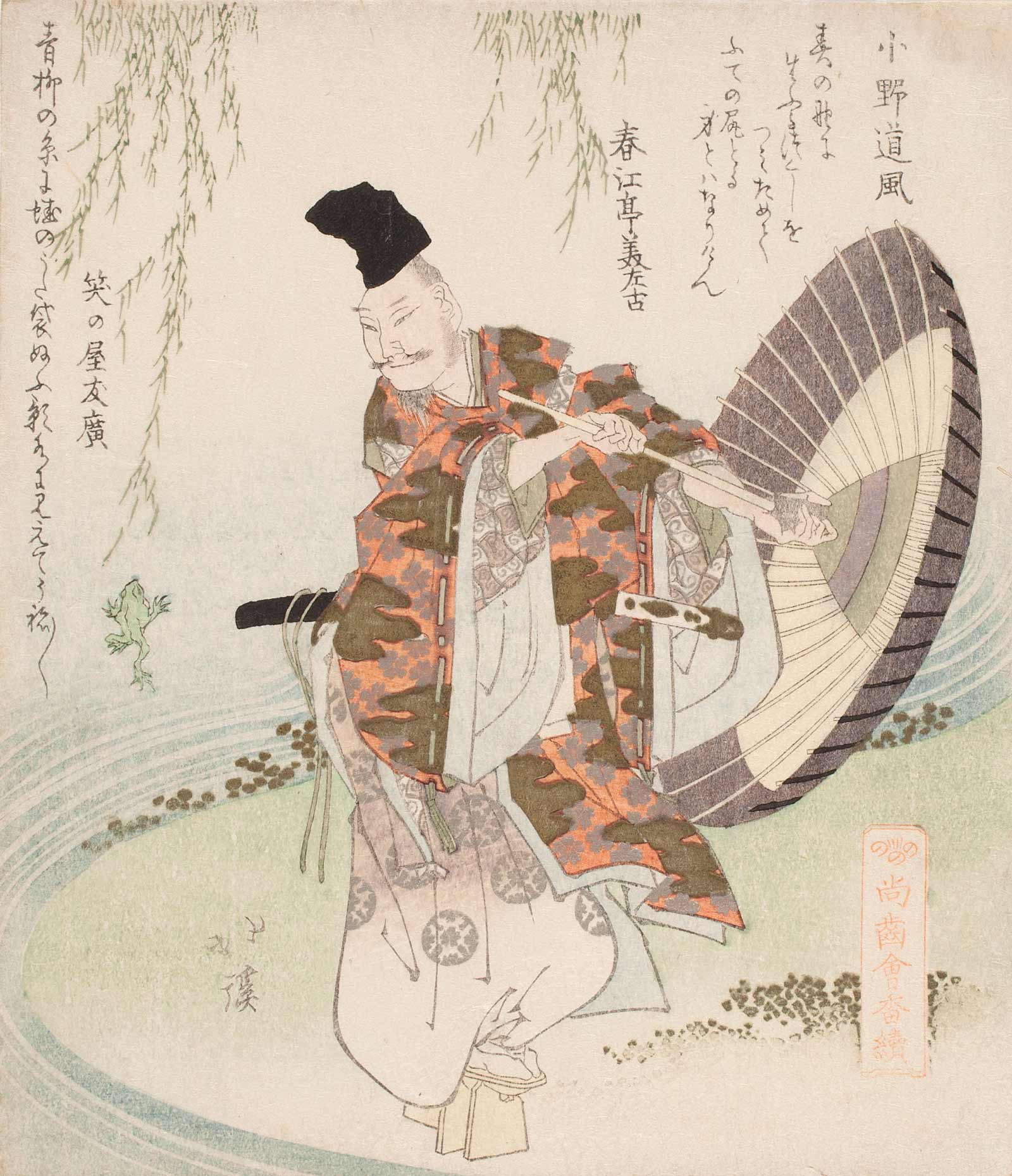 Totoya Hokkei: Ono no Tōfū standing on the bank of a stream and watching a frog leap to catch a willow branch, circa 1822

Smaller and more intimate than the more familiar ukiyo-e prints of actors, courtesans, and landscape scenes that were commercially printed in the thousands and captivated European artists, these surimono were privately printed in small numbers. Most were made in the capital, Edo (today’s Tokyo), in the early nineteenth century. Cut on hard cherry wood and printed with infinite delicacy and precision, they were luxuriously produced on thick paper, often embossed, using un-inked blocks to create texture, and dusted with mica or mother-of-pearl to give luster.

The effect is ravishing. In A mother with her two children feeding chickens, three poems celebrating the coming of spring, hang like strings to the left of the print; beneath them, a cock and hen peck at grain. On the right, a mother watches, one child on her knee, another at her side. Everything is in harmony: the delighted expressions on the children’s faces, the folds of the mother’s yellow shawl and her patterned kimono, the design on the sloping plate from which the boy has thrown the grain, the blossoming plum tree behind them. This happy, tender print was probably a New Year’s gift for the 1825 Year of the Rooster—all three poems are full of wordplay and onomatopoeic “cluck, cluck, cluck.”

Such playfulness is typical of the genre, with the pictures adding to the references and allusions of the verse. As the curators Clare Pollard and Kiyoko Hanaoka explain in the catalogue (the source of all my information), the interweaving of art and poetry has a long history in Japan, dating back to tenth-century painted scrolls and to the twelfth-century Tale of Genji. Kyōka poetry, “playful” or “crazy” verse, adopting and improvising within the classical poetic form of thirty-one syllables, was first mentioned as early as 1191. Slowly, over the centuries, these learned, witty verses became a recognized art-form, practiced by aristocrats, samurai, priests, and wealthy merchants. In the late eighteenth century, large groups of poets, cutting across all social classes, met in tea-houses and restaurants for monthly contests: on special occasions like the New Year, they chose the best poems and commissioned artists to illustrate them, creating precious celebratory gifts.

Poetry was based on feeling, and words themselves were believed to have magical force, so the surimono prints carried an active beneficent power—like passing on a blessing. Their subjects range from zodiac animals to favorite legends and details of everyday life, and they are packed with punning references and auspicious images: a full tobacco pouch to show happiness, a box of coins to promise wealth.

The prints at the Ashmolean date from the 1790s to the 1830s. The earlier ones favor pale colors—reds, purple, orange, yellow, green, and blue—subtle shades employed, for example, by Katsushika Hokusai in A courtesan with a koto and a dog. Today, Hokusai is known chiefly for his series of prints of Mount Fuji, including the soaring Great Wave off Kanagawa (1829–1832). The intimate interior we see couldn’t be more different. An elegant courtesan, her flowing hair held back by long hair-pins, has a plectrum on her finger and is about to put another on her thumb. She’s preparing to play the koto, the stringed instrument on her lap, but she pauses to look down tenderly at her little dog, whose sedate, anticipatory expression almost mirrors her own.

The airy beauty of this print comes not only from the detail, but from the composition as a whole. A line on the right indicates the edge of a sliding door: we are being given a glimpse of a private space, a cherished moment of leisure. The woman’s long robe sweeps round in a curve, almost underlining the poetry, while its fishing net design, typical of the geometric motifs that Hokusai often favored, adds to the curving, musical movement. Winter is over, say the poems. A warbler sings in a tree, unafraid: “As the morning mist lifts a jewel-like koto is splendidly played—spring has come.”

By the 1830s, the pale colors had given way to stronger pigments and bolder outlines. In Two women on the beach at Enoshima, a double print, produced for the Year of the Snake in 1833, the background is almost abstract. The island of Enoshima, a place of pilgrimage, held a shrine to the goddess Benzaiten, or Benten, patron of music and entertainment, whose messenger was a white snake. Behind the women gathering shells, a snake-like path winds across to the island: beyond, a simplified Mount Fuji rises amid swirling clouds, with trails of deep Prussian blue (an imported European color). The poems, written in silver, almost dissolve into the air.

The mood is not always so tranquil. Several prints depict subjects from martial legends or memorable scenes in the powerful Kabuki dramas, while others, like An arhat with a tiger, are weirdly disconcerting. The arhat is an enlightened, ascetic Buddhist disciple, and with his drooping cheeks, bald head, and bushy brows, he could be a comic figure, either not quite human, or exaggeratedly so. Yet his serenity shines through. In his brown monk’s robes, he seems calmly oblivious of the fact that he is almost enveloped by the tiger (a traditional companion, in Buddhist lore, to two early arhats). And the tiger itself, like the monks, seems itself to be morphing into another creature altogether, perhaps a python, smiling sleepily.

These intriguing prints come from a collection made in the early twentieth century by Herbert Jennings, about whom little is known, apart from the meticulous records written in his notebooks when he hunted down each prize. I am beginning to understand his passion. A knowledgeable collector would cherish these prints for their complexity and wit, as well as their technical skill and beauty. But to someone like myself, who speaks no Japanese and is deaf to the complicated clues and references, their appeal is enhanced by the way they remain remote and mysterious, signposts to an entirely different culture.

One of my favorites is the bookish Butterfly (Kochō). The whole print, created around 1830 by the artist Yashima Gakutei, famous for his elaborate patterning, is a fantasia on the title. Against a butterfly-printed background, in front of a fan-like panel of poems, all of which mention butterflies, a girl sits at a lacquered desk. Wearing a butterfly-patterned kimono, she sports a butterfly pin in her piled-up hair and holds a butterfly-decorated book. She turns her head as if someone has just called her name. But what is she reading? Who is interrupting her? Why does she have that pile of books? Are those blank pages for the years ahead, or are they records of the years that have flown by—our butterfly existence? We will never know: the puzzle is the essence of her charm.

“Plum Blossom and Green Willow: Surimono Poetry Prints” is at the Ashmolean Museum, Oxford, through March 17.

‘Oceania,’ Art of the Islands

“Oceania” makes it clear that exchange is a two-way process; its focus is not on Western expeditions but on the indigenous art of the diverse island cultures themselves.