Yevgeniya Baras’s small, knotty paintings look like talismans from an alien culture. Pushing aside painting norms, she works on both sides of the canvas to slowly conceal and reveal cryptic and voluptuous iconography—a meticulous process of building layer upon layer of paint, while simultaneously scraping away the surface, unearthing earlier manifestations of the image.

These paintings never strive for a quick read, each detail further complicates the next. What emerges is a highly personal lexicon of forms that conjure the forest landscape of her youth in Russia.

Two years after the Soviet Union collapsed, Baras and her family joined the exodus of Soviet Jews, leaving their hometown of Samara, where the Volga and Samara Rivers converge in southwestern Russia, and settling in Philadelphia. She has now lived in the United States longer than she did in her native Russia, but she’s always holding hands with her own history.

Before the pandemic took hold, Baras would shuttle from her home in New York to teach at both Sarah Lawrence College and the Rhode Island School of Design. As Covid-19 has indefinitely delayed a residency and teaching plans, there is a temporary stasis on Baras’s normally peripatetic lifestyle. She is a 2019 Guggenheim Fellow and has been a resident at the MacDowell Colony and with the Chinati Foundation. And, as soon as life resumes in Los Angeles, she’ll be showing a new set of paintings at The Landing gallery there.

Baras spoke to me by Skype from her home in Sunnyside, Queens, about making her own childhood toys, the resilience of immigrants, and her skepticism about social media narcissism as self-improvement. (Our conversation has been edited and condensed.)

Yevgeniya Baras: I moved to Queens after spending a decade in Bushwick and Williamsburg. This area is very Eastern European—Romanians and Bulgarians, primarily. They have an Eastern European attitude, like, “Shit happens.” People here have worked in the US for thirty years, bought an apartment, but their thinking is still Eastern European. People have stood in lines in their countries. The panic is less palpable here. Supermarkets are not sold out.

Just a fifteen-minute drive away, though, it’s completely different. That’s where Elmhurst Hospital is, and there is more tragedy.

Did anything make you panic when the pandemic took hold?

Mainly, I felt concerned about older and vulnerable people, including members of my own family. As for myself, I have a giant appetite for life. I want to pack everything in. I didn’t want to participate in some Instagrammable version of self-improvement. And I definitely do not appreciate any comparisons to Anne Frank. I don’t feel we will never see museums again. I don’t think that culture ends in times like these. That said, generally speaking, in my life, I panic over not knowing. I am always aware that time is running out and I think about all the things I want to learn.

Your paintings feel very experiential, almost like walking through a landscape. And so much of your imagery seems to have been derived from the traveling you do. Is there a sense that if that stops, so will the inspiration for your art?

I have so much mining to do because of the many chapters I’ve already lived that I’m not worried about running out of material to build meaning from. And being an immigrant ends up being a blessing in this case because I speak two languages fluently. So I’m reading in two, I’m watching in two. I’m talking on Skype with friends in two. I have this larger world.

Yes, I’d love to sit in Bologna and have a coffee in a piazza with a friend. But on an everyday basis, walking between this apartment and the studio, and all that I have inherited—like the Yiddish writers I’ve wanted to read who were writing in the town my grandfather is from; studying Hebrew and maybe reading it one day; watching films in Russian; being so interested in Middle Eastern cinema, like Iranian and Lebanese films—it is fine.

So you have ventured out of your home to make work?

The first month and a half, I just drew and painted in acrylic in the house. But recently, I started carrying these drawings to the studio because I felt that the materiality I want is not really possible in drawing. And I started feeling as though everything I’m doing is like a skeleton of, or the anchor for, what will happen in the studio, but it’s not the thing.

In the past, you’ve made double-sided paintings. Is that something you still do?

I only show them one way, but I do work on them from two sides. I think that probably relates to the fact that I studied crafts, not professionally. But that was the beauty of growing up in the Soviet Union: you could go put your child into a papier mâché class every Saturday at 10 AM; ice skating at 12 PM—and all of it was free. Everybody was interested in anything that was available—a book being passed around that’s photocopied, a secret concert. So I labor over both sides of paintings as if they are objects of craft in the round—these are not sculptures, they are objects that are loved from both sides.

I still make papier mâché, I can knit, and it’s all related to my childhood. I actually made my own toys. My mom made toys out of her dresses for me. When I was growing up, it was really hard to buy things, so much of what we had in our house was handmade and I really responded to it.

What do you think the art world will look like once this is over?

Right now, for artists, it’s time to say what you really mean—time to sharpen your craft, get closer to your subject matter, hear yourself. But it is also being aware of the crisis, the grief, and all the changes that are taking place around us. I tell my students: “This is really the time to ask: Are you an artist? Are you going to make art with whatever materials and under any conditions?” Maybe that’s also the reason I go to the studio now—because of the materiality, the need for contact with surface. Because, for me, drawing ends up being the carcass of the thing that gets sculpted later.

You left Russia in 1993, at the age of twelve, a time of mass exodus for many Jewish families there. How much has the country molded who you are and the way you see the world?

I moved from a place that is very rich in history and has a relationship to landscape and language. It’s a deeply soulful and cultured place, where Jews spent a certain period of time. I think we were passing through there. Still, I feel spending time somewhere for hundreds of years, you take that in, somehow preserve it in your blood and genes.

The Russian language is truly beautiful, and I feel lucky to be able to read and understand it. That’s actually how I’m spending quarantine, by listening to writers and thinkers speak. I feel both that I am of that place and that we were temporary residents. I am really glad to have other chapters in this life in which I can look forward, as a citizen of the world, rather than only looking back. 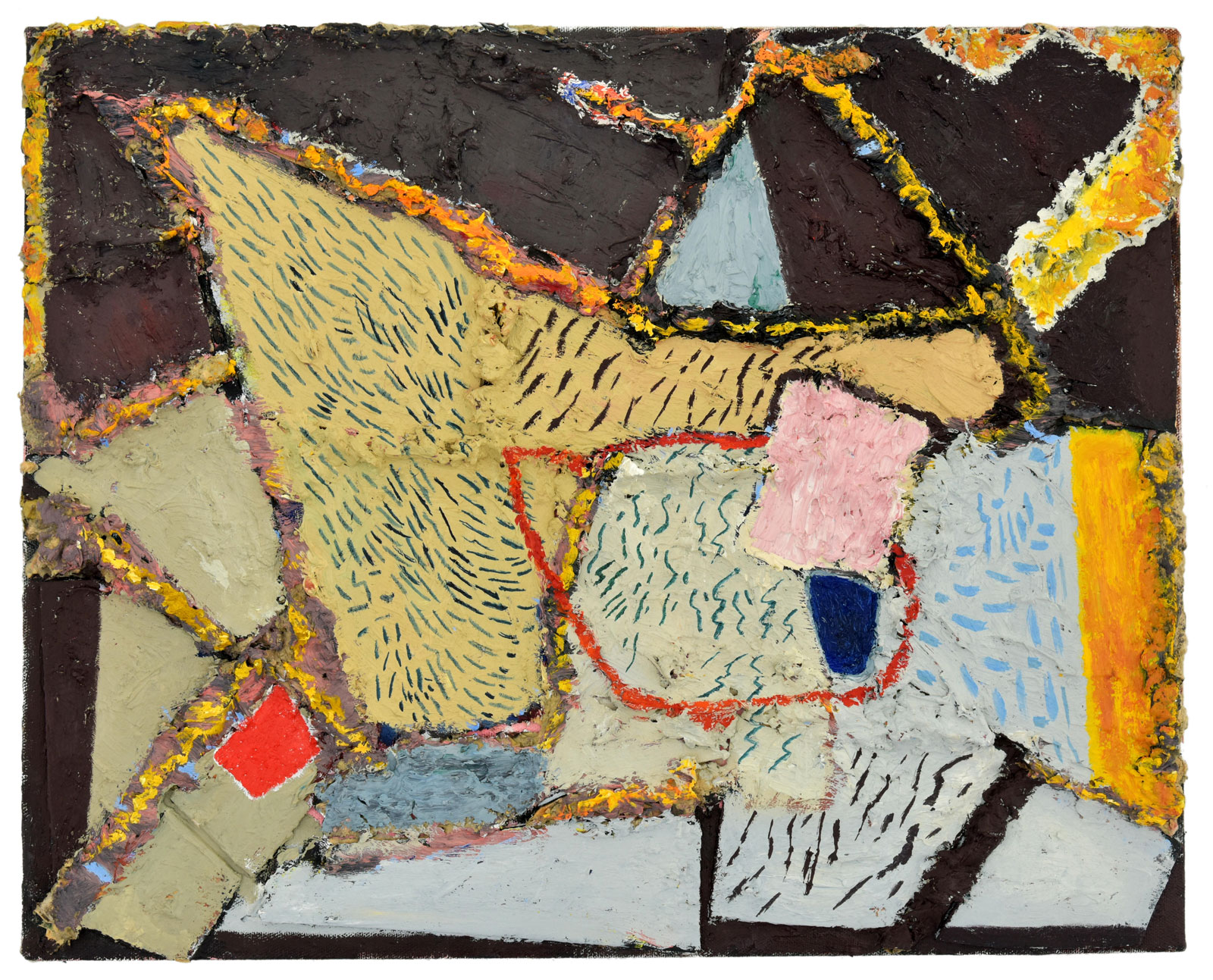 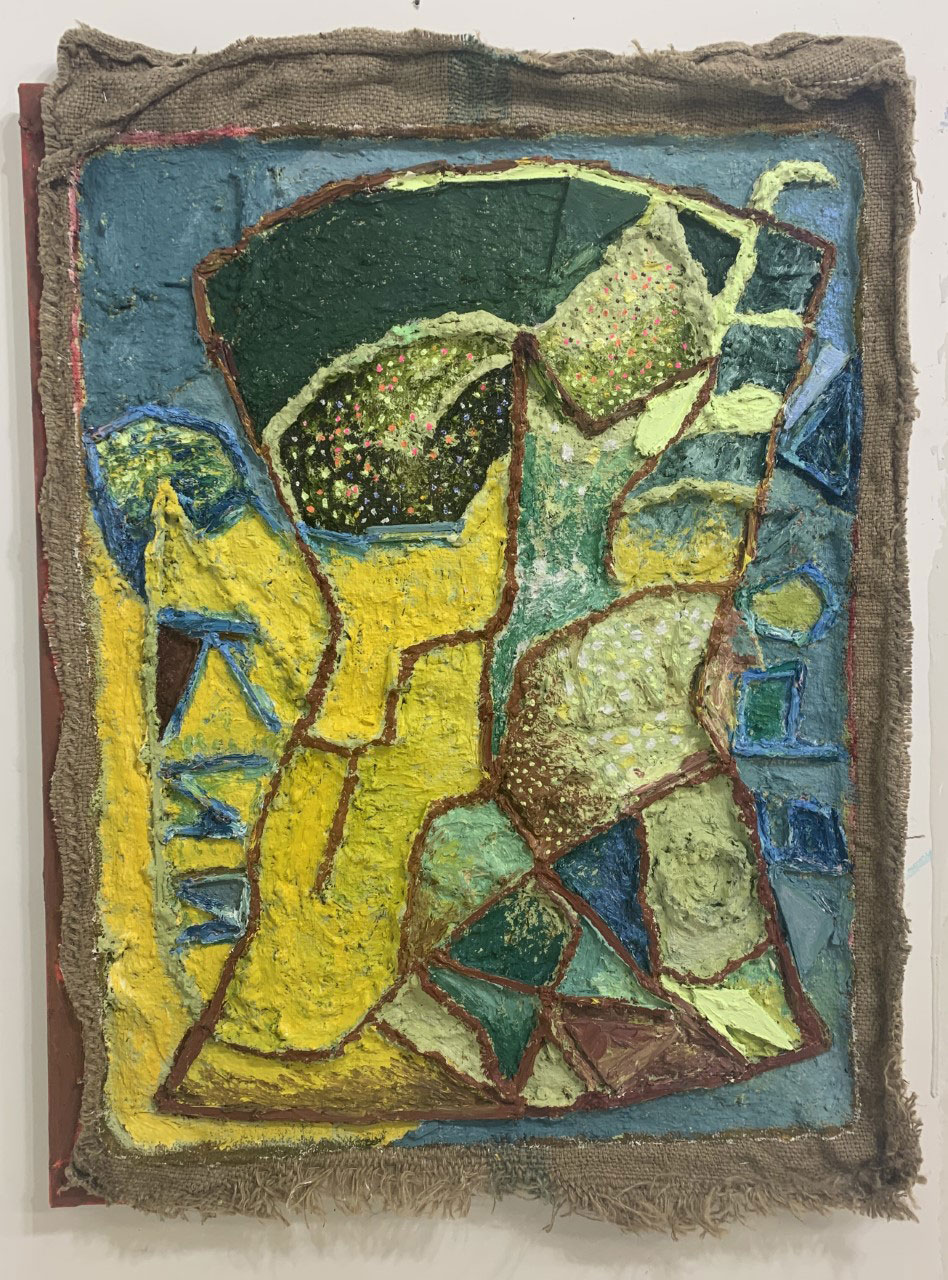 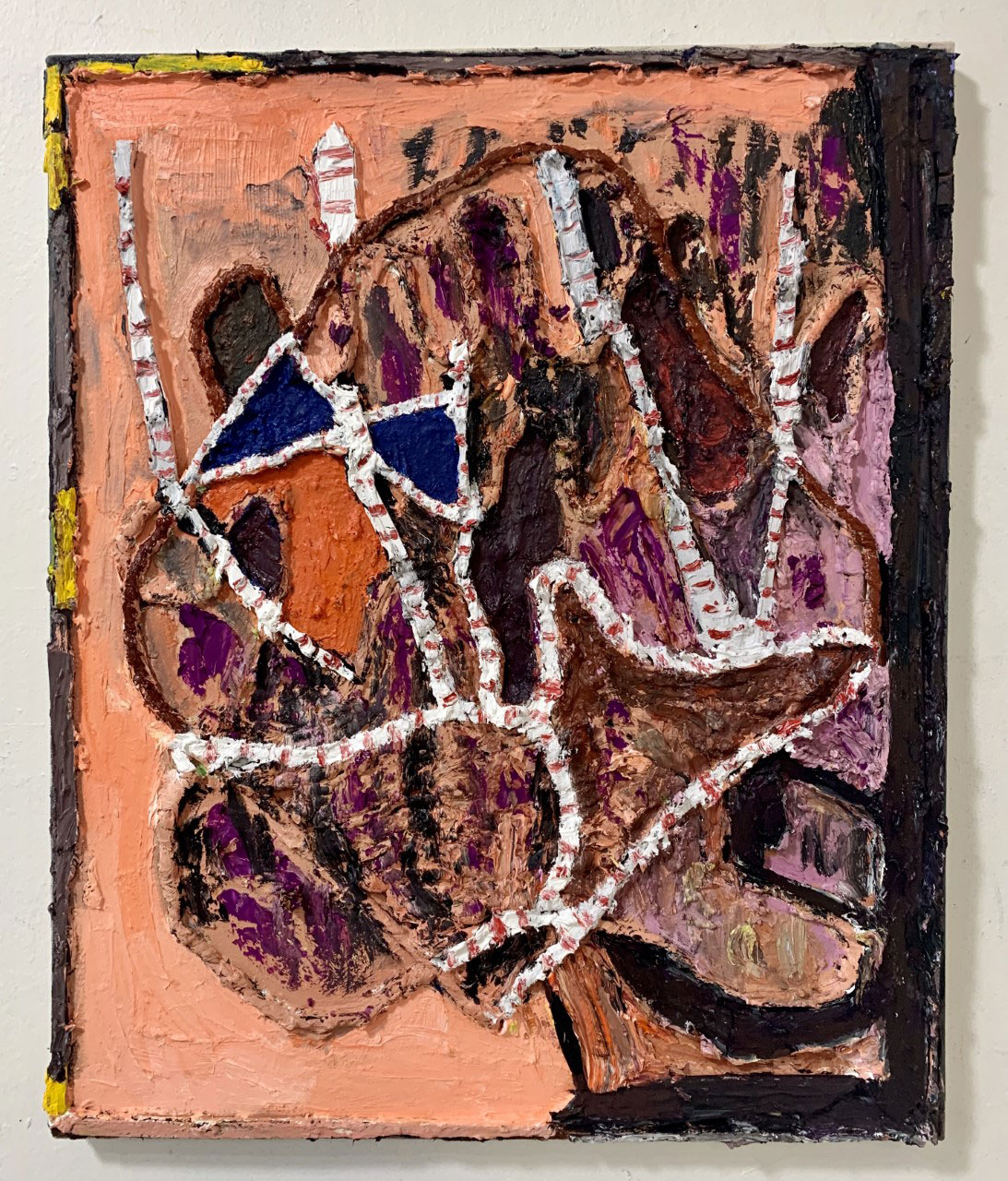 Your pieces have so much physicality, sometimes it feels as if soil is mixed into the paint or you’re using the paint itself as a kind of mortar to hold together incongruous fragments. How much do you think the landscape of your Russian childhood affected the aesthetic of your work?

I think it’s really formative. We had a country house. I spent three months a year in nature. And while I don’t have anywhere to garden here, I still recognize certain types of plants because I spent a lot of time with them when I was little.

We had a garden, and a very dense forest behind it. I was very close to the landscape, and the kind of deep dark woods where you’re able to walk alone, be in sunflower fields that were way taller than you, and find wild cherries. I think that a lot of what I saw and felt at that time is connected to the mood of my work.

Do you still pine for that time or feel drawn to the country now?

I have reached a point where I feel really blessed to have been touched by the place and era in which I was born and yet free of the need to go there regularly. It exists in me in a really liberating way. So, when I go to a place like Morocco, and there’s an old man watching over a cemetery in Fez, I’m open to connecting with him. I’m not bound by where I’m from. And this allows me to be the kind of traveler who is able to reach out to different cultures and people.

Have you considered getting out of New York City and leaving, amid all this?

I can’t actually pack it up that quickly. I feel it’s important to be able to stay long enough to understand and to contribute to this place that I call home. And what is a red flag to some is not quite enough of a red flag to me because of the things I have lived through. I want to stay in New York and be in this time of crisis with these people and with the community I have made.

This is part of a series of conversations during the pandemic between New York Review contributors and artists.

An Interview with David Adjmi

An Interview with David Adjmi

Marisa Mazria Katz is a New York-based writer and reporter who has covered culture and politics in cities that include Casablanca, Kabul, Port-au-Prince, and Istanbul. Her work has appeared in The Wall Street Journal, Financial Times, Time, Vogue, The New York Times, and on NPR. She founded the Eyebeam Center for the Future of Journalism in 2018.

‘Between Hospitality and Hostility’: An Interview with Michael Rakowitz

Michael Rakowitz: Even though I am not what I would call a religious Jew, there are rituals, practices, and repetitions that are part of this religious background that are a great way of constantly reminding oneself of ethics and actually hoping for something better than what we have right now.

Passover 2020: Why Is This Year Different From All Other Years?

As Covid-19 took hold in New York City, I started receiving emails from the rabbi at my local shul. The barrage of newsletters cracked open my claustrophobic anxieties.