The Gospel of Luke says that the pregnant mother of Jesus could not find shelter in an inn, so she had no place to put down her newborn but in an animals’ food trough—phatne in Luke’s Greek, the word rightly translated as praesepium (Latin), krippe (German), crèche (French), presepe (Italian), manger or crib (English). They all mean food trough. Yet this humble picture of a homeless mother having this as her last resort is turned into grand theatrical displays in our annual crèche unveilings. In this celebratory setting, the vagrant woman has become queenly, she is receiving royalty, she is lit by angelic hoverings. The dirty trough has become a tidy little bed of straw.

Franciscans are supposed to have been the original patrons of crèches, since St. Francis, according to legend, created the first presepe to celebrate an outdoor Christmas Mass in 1223, giving it a populist air. Initially, the figures were life-size and the scene centered on the Holy Family, but during the Baroque period, the scale was vastly reduced while gaining complexity with the addition of peasants, horsemen, merchants, dogs, cows, goats, and even water buffalo. Actually, Jesuits in the seventeenth century used modeling figures and increasingly intricate architecture and illusionistic landscapes to stage the Nativity story as a teaching device, and some of their aristocratic patrons began to commission artists and architects to make grand examples of this playful new form for their palaces. The artistry involved reached a peak in eighteenth-century Naples, under the Bourbon kings, when the largest crèches would often fill several rooms and be continually added-to and rearranged to enhance the effect. The authentic presepi of that period still have the windblown drapery of the Jesuit-favored baroque period, and it is a great curatorial guessing game to identify which famous Neapolitan painter might be responsible for this or that figurine in the crèche.

Examples of elaborately multi-figured Neapolitan presepi are highly prized assets of museums throughout Europe. But there are only three of them in America—at New York’s Metropolitan Museum of Art, the Carnegie Museum in Pittsburgh, and the Chicago Art Institute. All these were purchased from collectors in Naples, the first two from the vast family museum of Eugenio Catello.

In New York, Loretta Hines Howard began buying presepe figures in 1925, supplementing the figures she acquired from Catello with statuettes of flying angels (her special love) that she found during her visits to Italy. When she donated her collection to the Met in 1964, the angelic population (fifty-five angels and twenty-two cherubs) outnumbered and were slightly larger than the human figures (sixty-nine of them, made of satin, terra-cotta, and wood, many of them around ten or twelve inches tall). How can you fill the sky above the crib with so many angels and cherubs flying in for the event without a traffic jam?

The museum solved that problem by raising a tall (twenty-foot) and tapering Christmas tree above the crib—it gives lots of room for angels to swirl energetically at every level around this vertical axis.  When Mrs. Howard gave the ensemble to the Met, she made it a condition that she would play, every Christmas season, the head of air-traffic control, rearranging the altitude and attitude of each angel, a task she performed until her death in 1982.

The second presepe that drew on the Catello collection was bought by the George Magee Wyckoff family in 1957 for the Carnegie Museum. It has fewer than a hundred figures (angelic and human combined), but its pastori (the name for all the humans who show up for this mystical event) are particularly colorful. There is one figure that may seem out of place but was actually a pride of the Neapolitans: a woman is shown riding an elephant. The animal would have been an oddity at Bethlehem, but not in eighteenth-century Naples. King Charles IV loved to collect exotic animals, and when Sultan Mahmud I sent him an elephant, the beast became a celebrity, often depicted—it was even drafted to appear in an opera at the San Carlo theater. Appropriately, the opera was Metastasio’s Alexander in India, performed in the Christmas season of 1742.

The presepe most recently acquired by an American museum, the one in Chicago, was a favorite project for Sylvain Bellenger from the moment he came to the Art Institute in 2012 as Curator for Medieval Through Modern Art. He meant to acquire a true Neapolitan presepe, and he would not go to the often-used Catello collection. He had instead a single collector in mind, Vincenzo Porcini, who opened his Naples art gallery in 1969. Porcini dealt with all kinds of Neapolitan art, but he had from childhood been fascinated with the town’s eighteenth-century legacy of presepi figures. In 2011, Porcini went to the artist Alfredo Laini with a request that he create a Neapolitan setting for a great presepe ensemble to be contained in a huge vitrine. That is the complete and authentic set that Bellenger hoped to buy, and the curator drew on the Art Institute’s generous patrons to pay for the whole thing to be purchased and shipped to America.

The entire ensemble reached Chicago in 2013. Unlike the other two presepi in America, which are taken apart and reassembled every year, the Chicago Nativity is an enclosed scene of (relatively) static arrangement. There are advantages and disadvantages to this distinction. One does not get the feeling of being part of the crowd of figures as in the open Pittsburgh presepe. All three presepi have examples of the most common structural type of the figurines—a tow and wire body with added heads and hands of terra cotta or wood—but there are more of them in Chicago (probably because it comes from less aristocratic houses than the Caletto pieces). The Art Institute’s crèche also has fewer of the aesthetically refined porcelain figures that one finds in the Met’s (Naples was as famous for porcelain as Venice was for glass). But the humbler type allows one to have movable arms and legs; and the need to cover the core in finery leads to concentration on exquisitely designed and sewn costumes.  The fabrics of such finery are better preserved under glass than in the in the disassembled and reassembled presepi in New York and Pittsburgh. 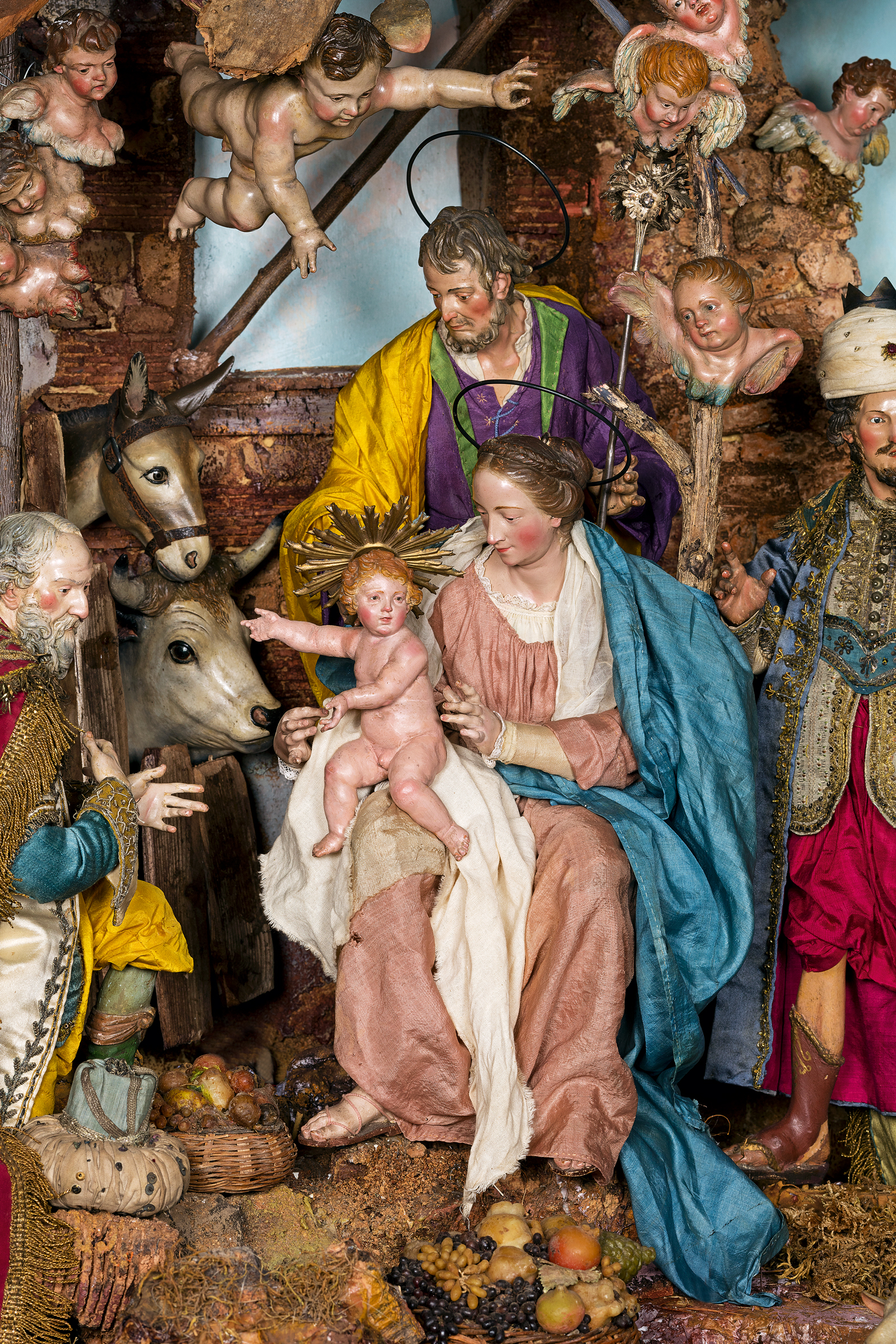 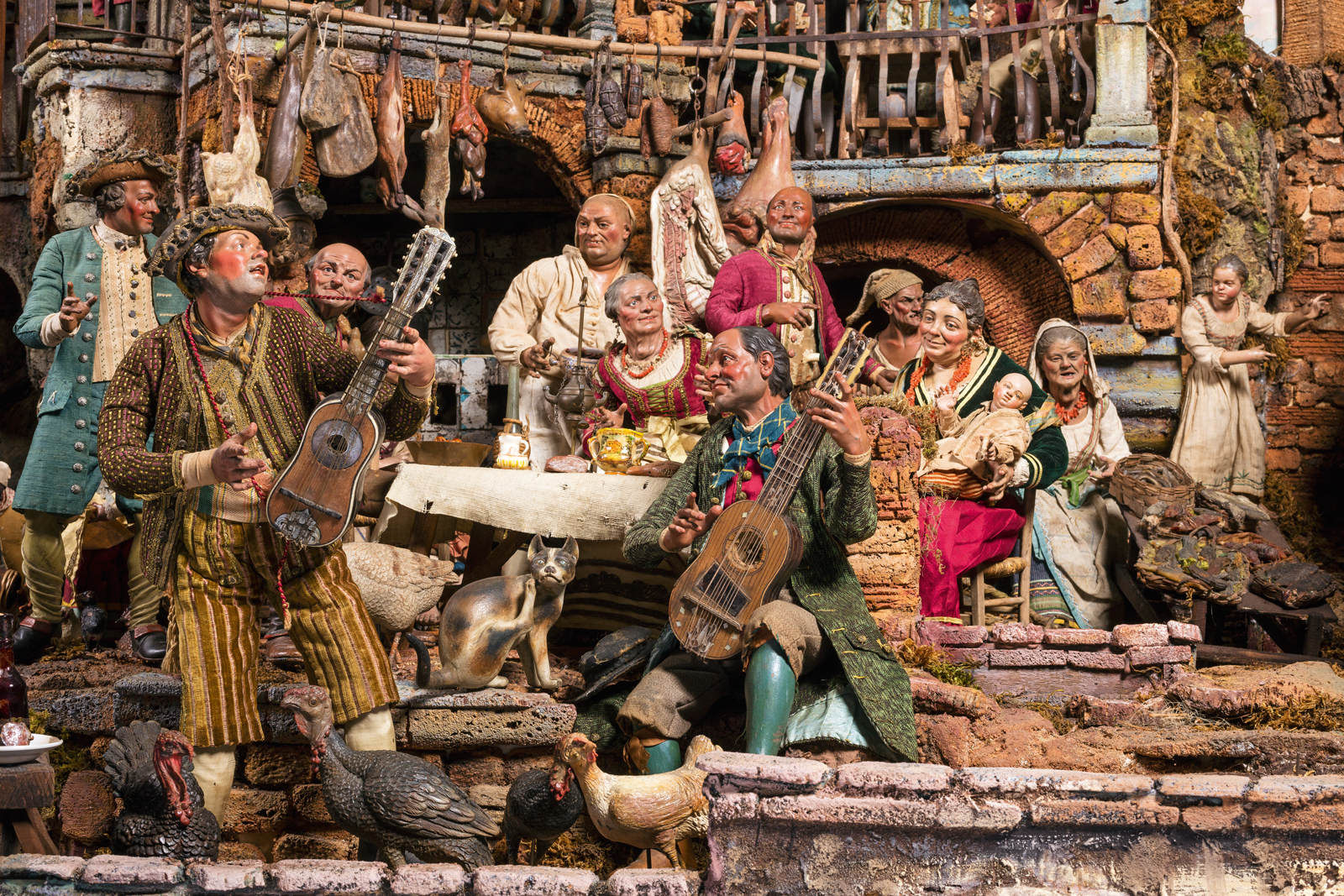 The Chicago crèche (detail of the tavern) 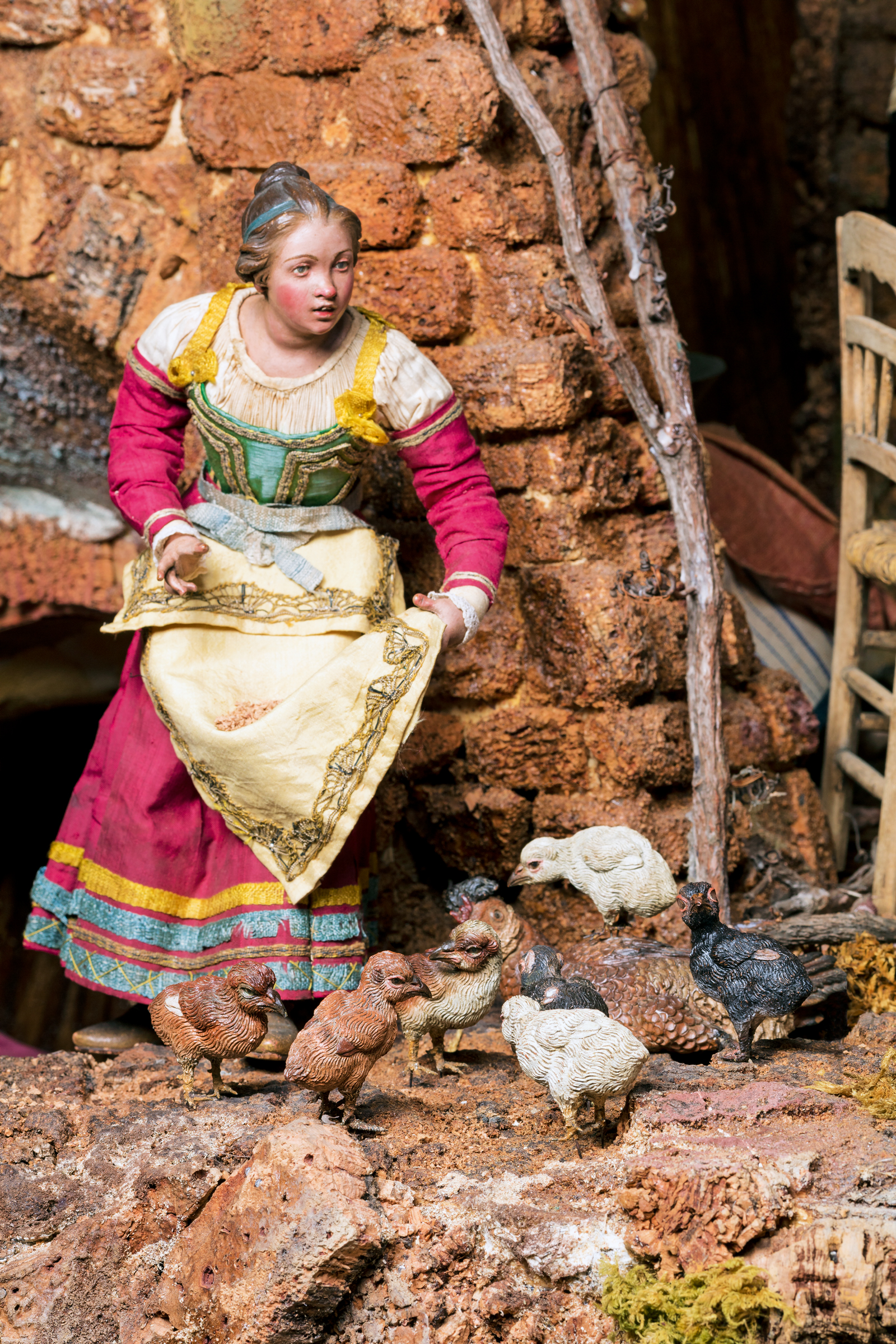 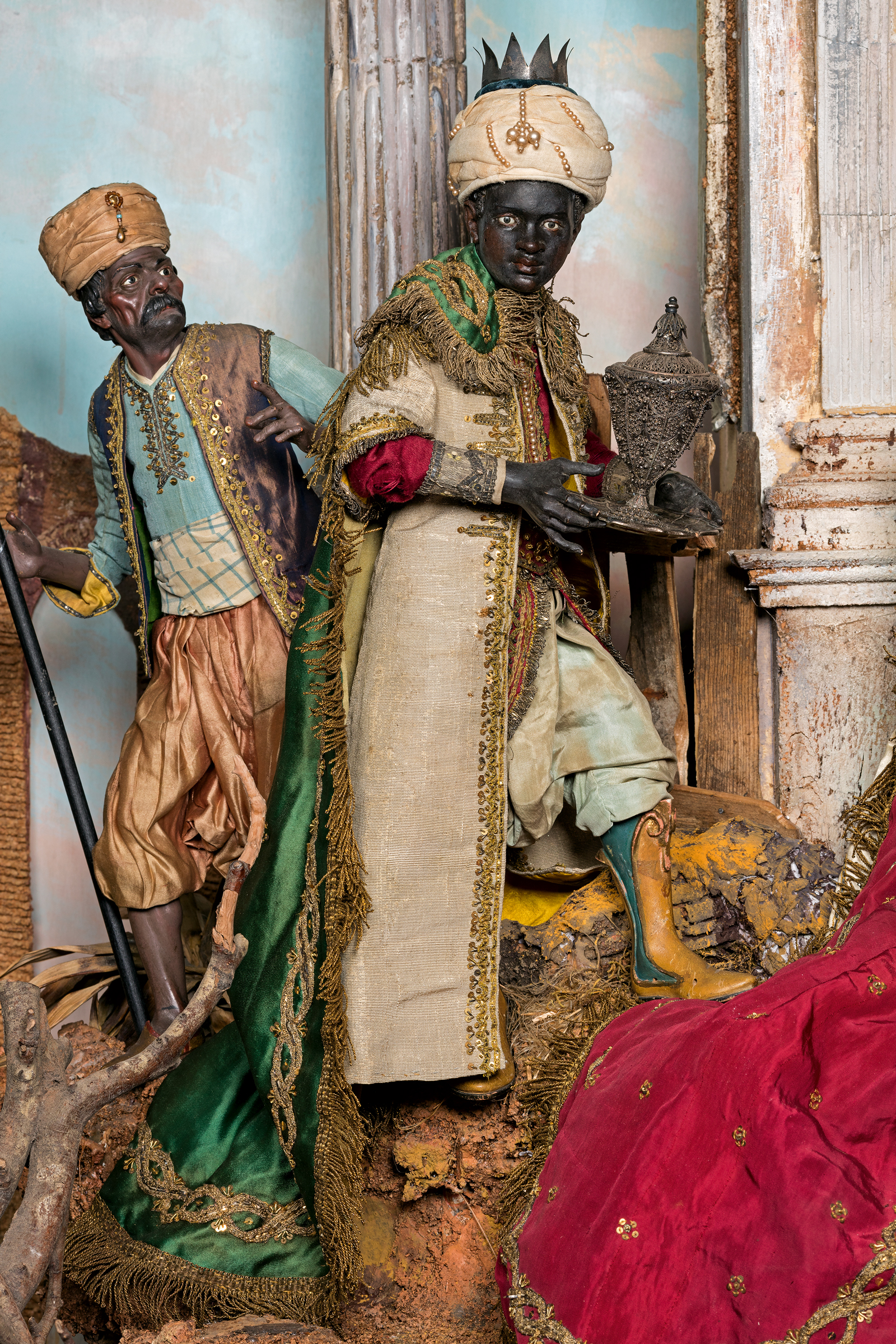 The Chicago crèche (detail of two of the Wise Men) 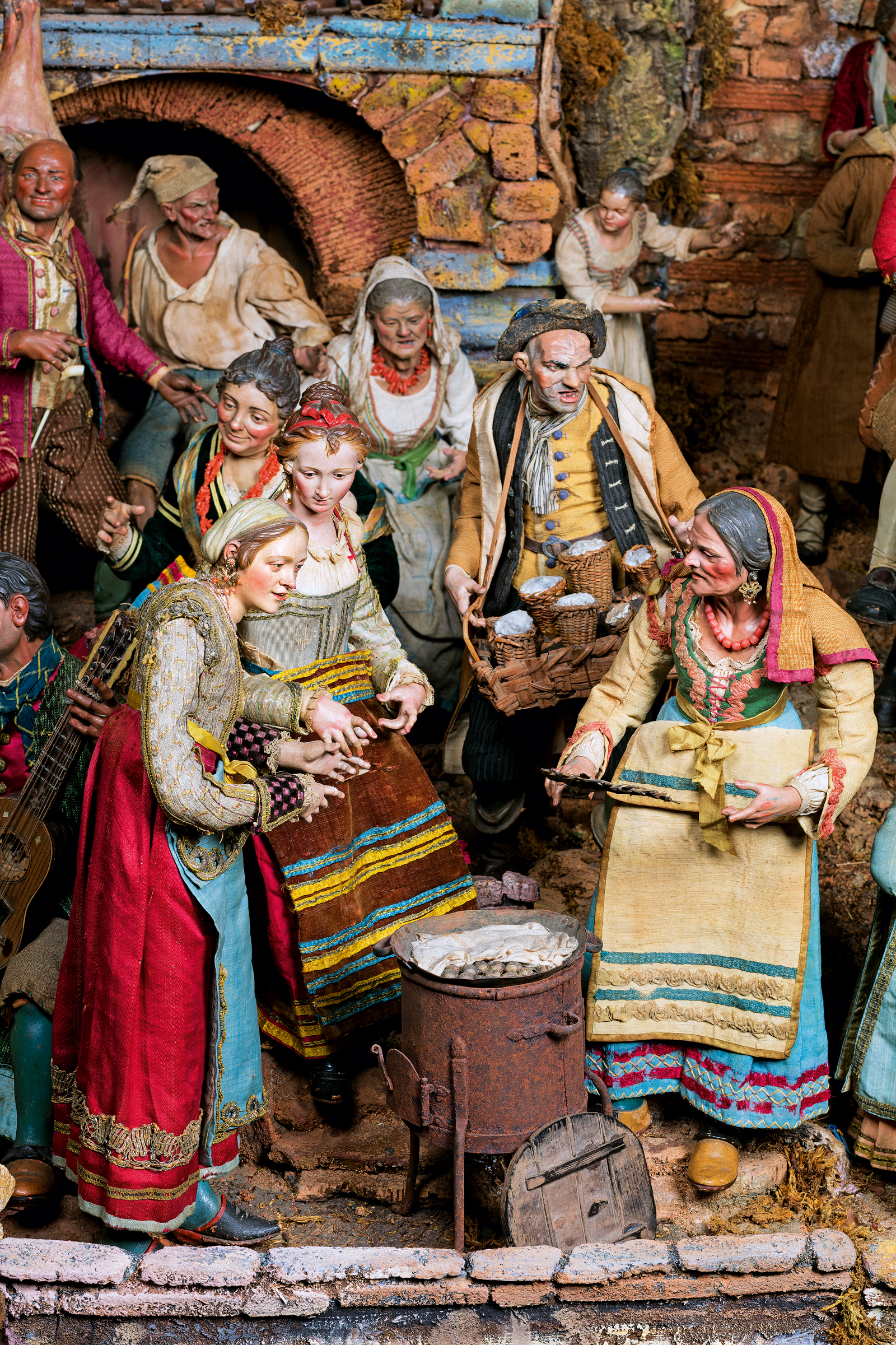 The Chicago crèche (detail of the ricotta seller) 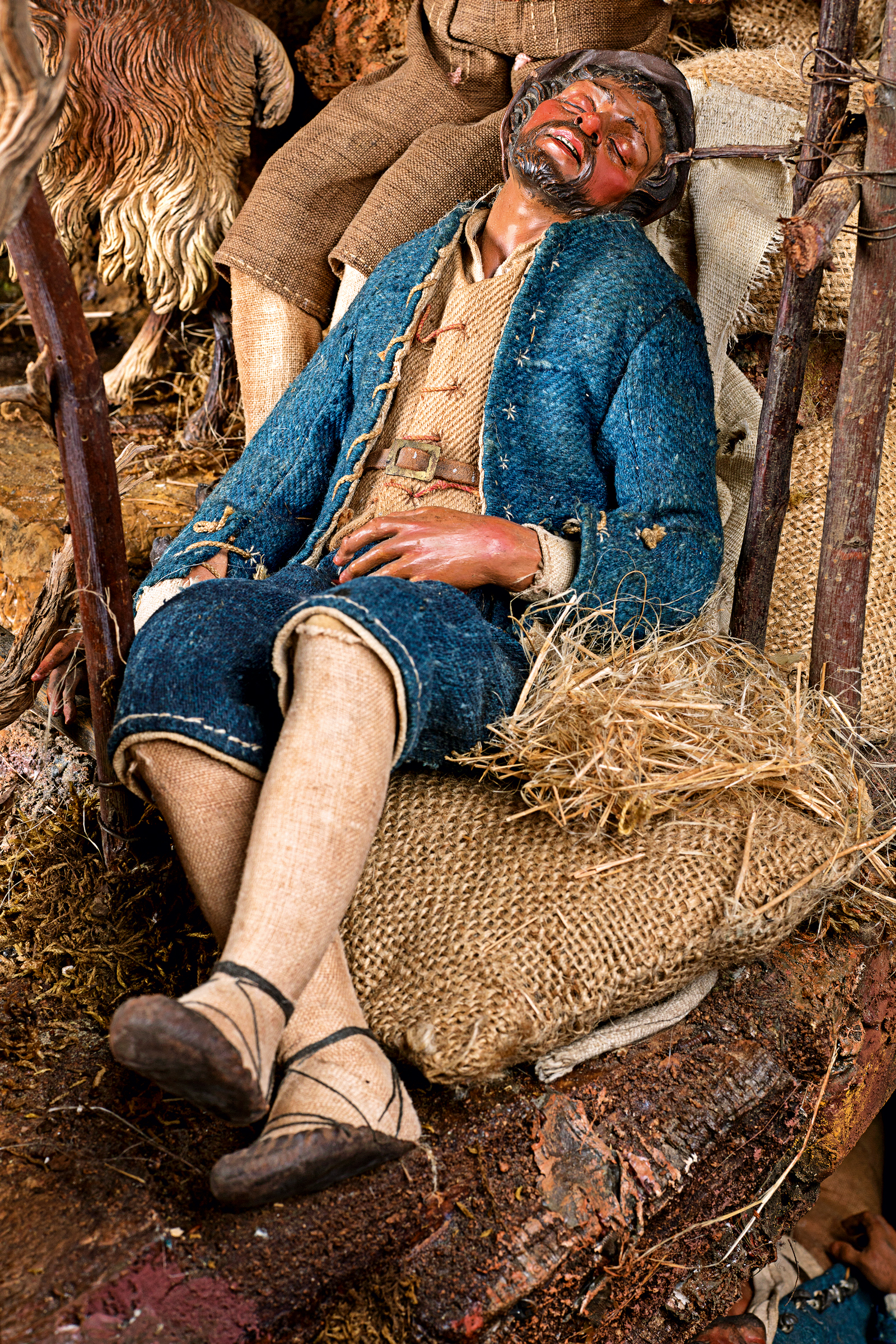 The Chicago crèche (detail of Benino, the shepherd who sleeps through the Annunciation) 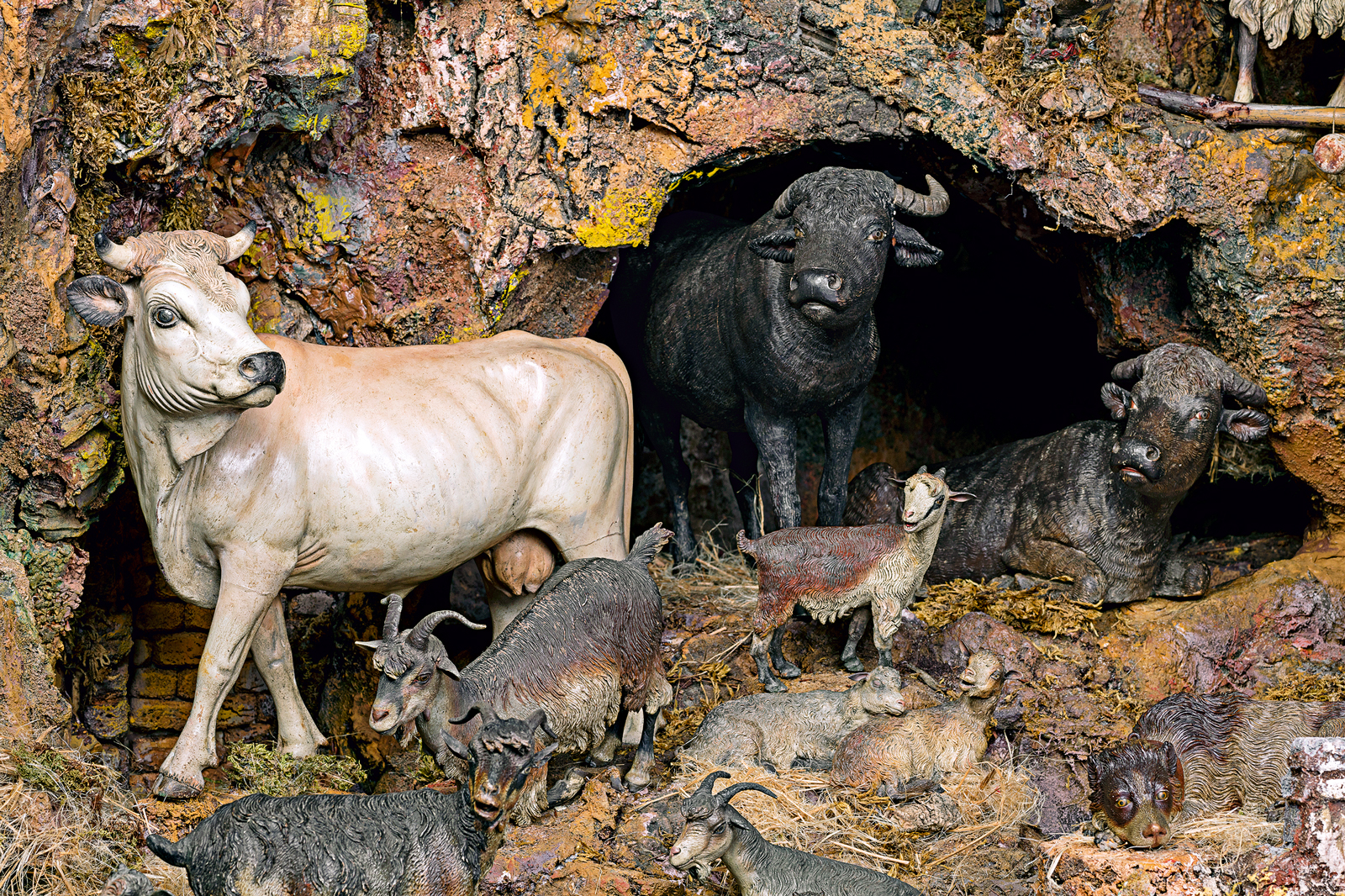 The Chicago crèche (detail of water buffalo and cattle)

All Neapolitan presepi include contemporary figures and their pets, but only Chicago’s has its own villain—the innkeeper who turned the Holy Family away from his place.  But while he scowls, musicians play and dance the tarantella for his merry customers, sounding their castanets and tambourine, while on a lower level men play cards, women nurse babies, dogs and cats prowl. On the right side of the scene, it may surprise people to see the classical statue of Hercules dug up in the baths of Caracalla in 1546, here enshrined as an alabaster miniature. But, like the elephant of Charles IV in Pittsburgh, the Hercules was a famous sight in eighteenth-century Naples, where king Ferdinand IV brought it from Rome in 1787. This was just another way of saying the Savior is born to us in every place and every time. But especially in Naples.

This and other lore can be found in the book Sylvain Bellenger has written with Carmine Romano about his proud acquisition, The Neapolitan Crèche at the Art Institute of Chicago. Bellenger performs this last work for the museum he served so well. He left in 2015 for an appropriate advancement, to be the director of the great Capodimonte Museum in—where else?—Naples.

Editor’s note: Following the publication of this article, readers have informed us of several other Neapolitan creches in the United States, in addition to the three discussed here. These include a second creche ensemble acquired by Loretta Hines Howard, which was donated to the Benedictine Abbey of Regina Laudis in Bethlehem, Connecticut; nearly two dozen eighteenth-century Neapolitan figures donated to the White House Christmas Collection by Mrs. Charles W. Engelhard, Jr.; and a creche owned by the Cathedral of St. John the Evangelist in Lafayette, Louisiana.

Sylvain Bellenger and Carmine Romano’s The Neapolitan Crèche at the Art Institute of Chicago, with an essay by Jesse Rosenberg and a preface by Riccardo Muti, is published by Yale University Press.

The Art & Politics of the Nativity

This nasty doodle, the earliest known anti-Jewish caricature, has much to teach us—about how contingent jokes morph into timeless “truths,” about how people come to hate their neighbors, and about the power and danger of even the apparently trivial image.