The sixteenth century boxwood miniatures currently exhibited at the Cloisters—thought to be in large part the work of a single individual in the Netherlands—are so breathtakingly intricate, the minuscule scenes in prayer beads and altarpieces rendered so exquisitely, that any viewer should be prepared to gasp, “How did they do it? The tiny little sheep! The tiny little angels! The tiny little spears no thicker than horse hairs! Elaborate gothic reliefs shrunk to the size of walnuts!” The exhibition plays to this sense of wonder but also reveals, after centuries, the secrets of their seemingly miraculous creation. Nonetheless, these diminutive objects have an impact for which the viewer who expects merely to marvel at technical virtuosity will be unprepared.

The fine gothic tracery of the prayer beads’ shells would give them enough traction to sit comfortably in the palm of your hand, were you allowed to hold them (and how you will long to!) as their original owners did. The densely crowded scenes, sometimes no wider then 25 millimeters, have to be inspected very closely in order to parse the narratives they depict: alternately the Adoration of the Magi, the Passion and Resurrection, the Last Judgment. Cradling that light, delicate object must have given one a sense of great intimacy, of cherishing the story contained in it. But at the same time it’s as if you are viewing the scene from a tremendous distance, the entire tiny tableau seen from an impossibly remote perspective, perhaps a God’s-eye one.

The small round prayer beads that open to reveal these scenes naturally create the impression that you have miraculously found this sacred miniature world in a nutshell. As the show explains, they were, in reality, carved in parts—the tiny scenes made separately and then inlaid into the round shell. New tools such as magnifying glasses—which were used starting in the late thirteenth century—were likely needed to make incisions as small as .3 millimeters. But the organicism of the forms, etched into this supple wood, give a sense of a natural entity. They bring to mind the mathematical concept of self-similarity, that is, of a structure whose parts resemble the shape of the whole. It is as though the Christian story is part of the ever-burgeoning fabric of nature. If you can find the Passion and Resurrection in an object this small, why not in a raindrop? There’s a sense in which this is not a fiction to the believer: everything in the universe really is imbued with this story, all of it meaningful as part of God’s creation. 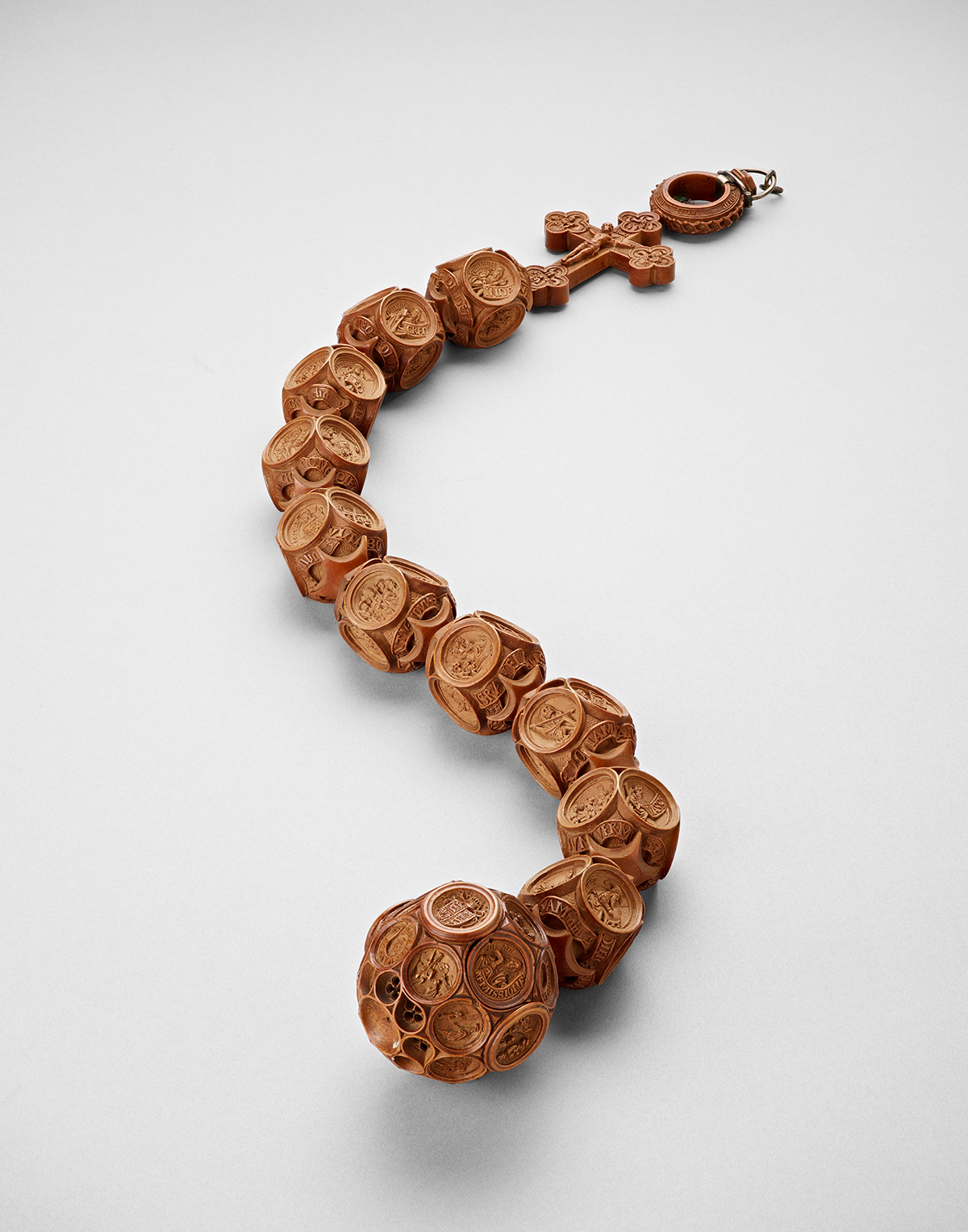 Boxwood rosary of Henry VIII and Katherine of Aragon, Netherlands, 1509–1526 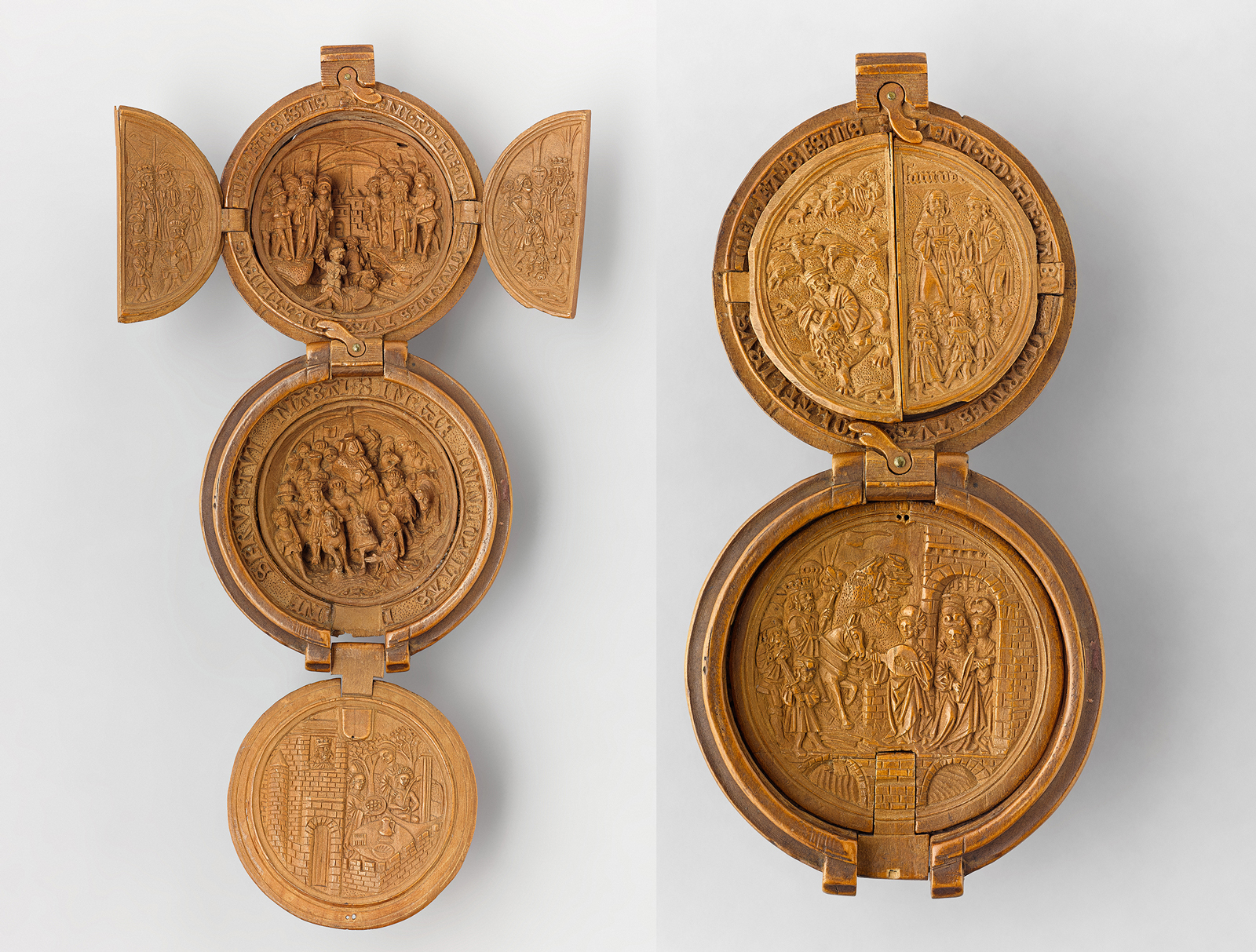 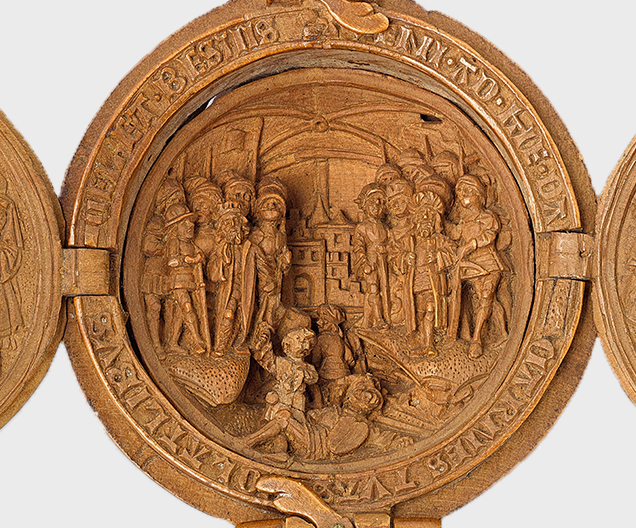 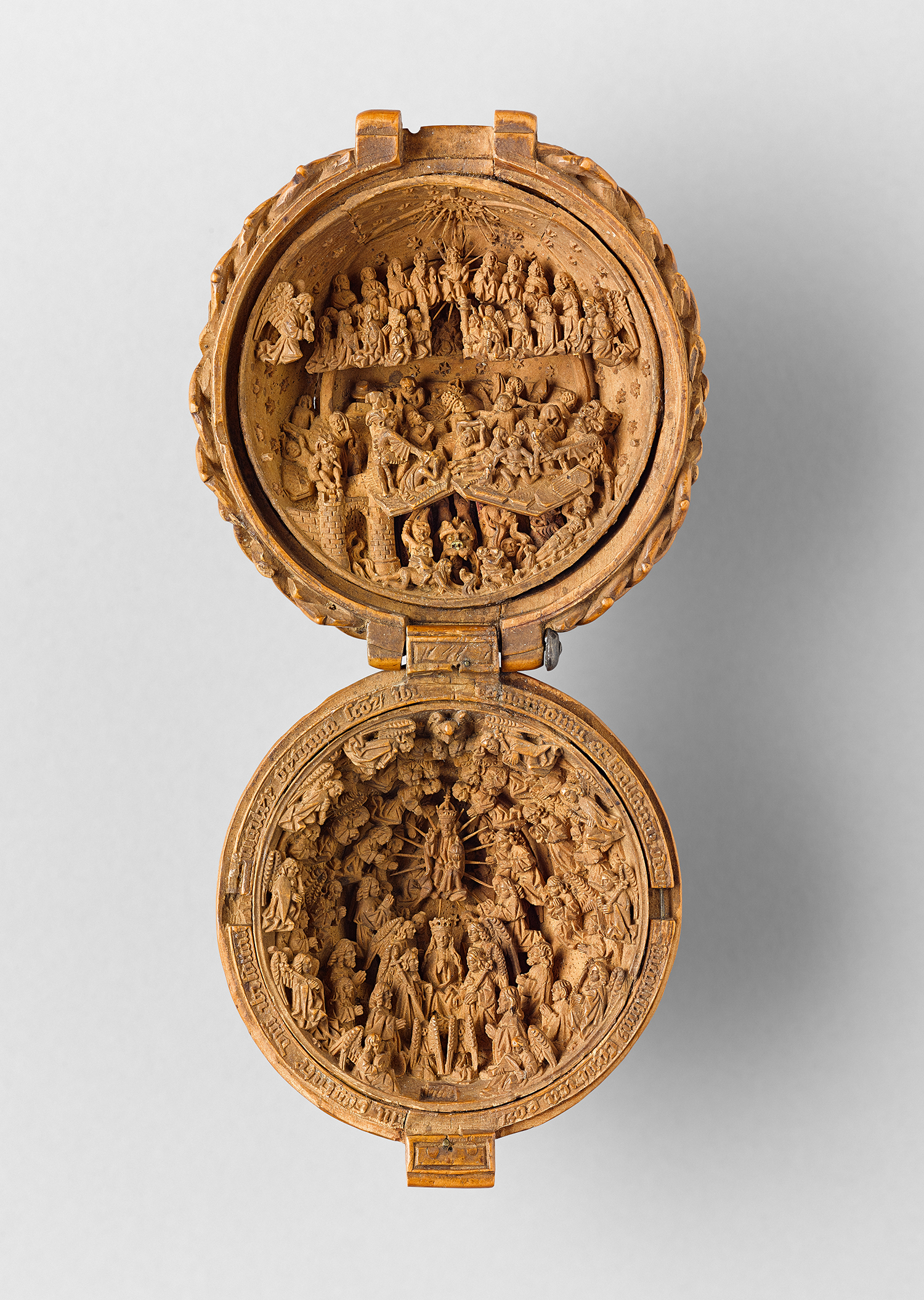 Boxwood prayer bead with traces of later gilding showing the Last Judgment and the Coronation of the Virgin, Netherlands, early sixteenth century 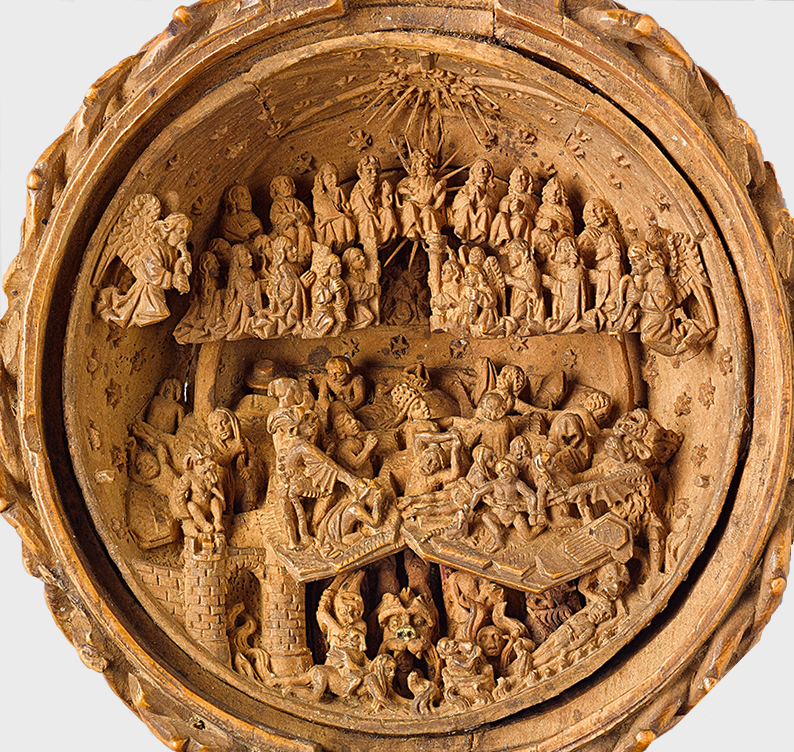 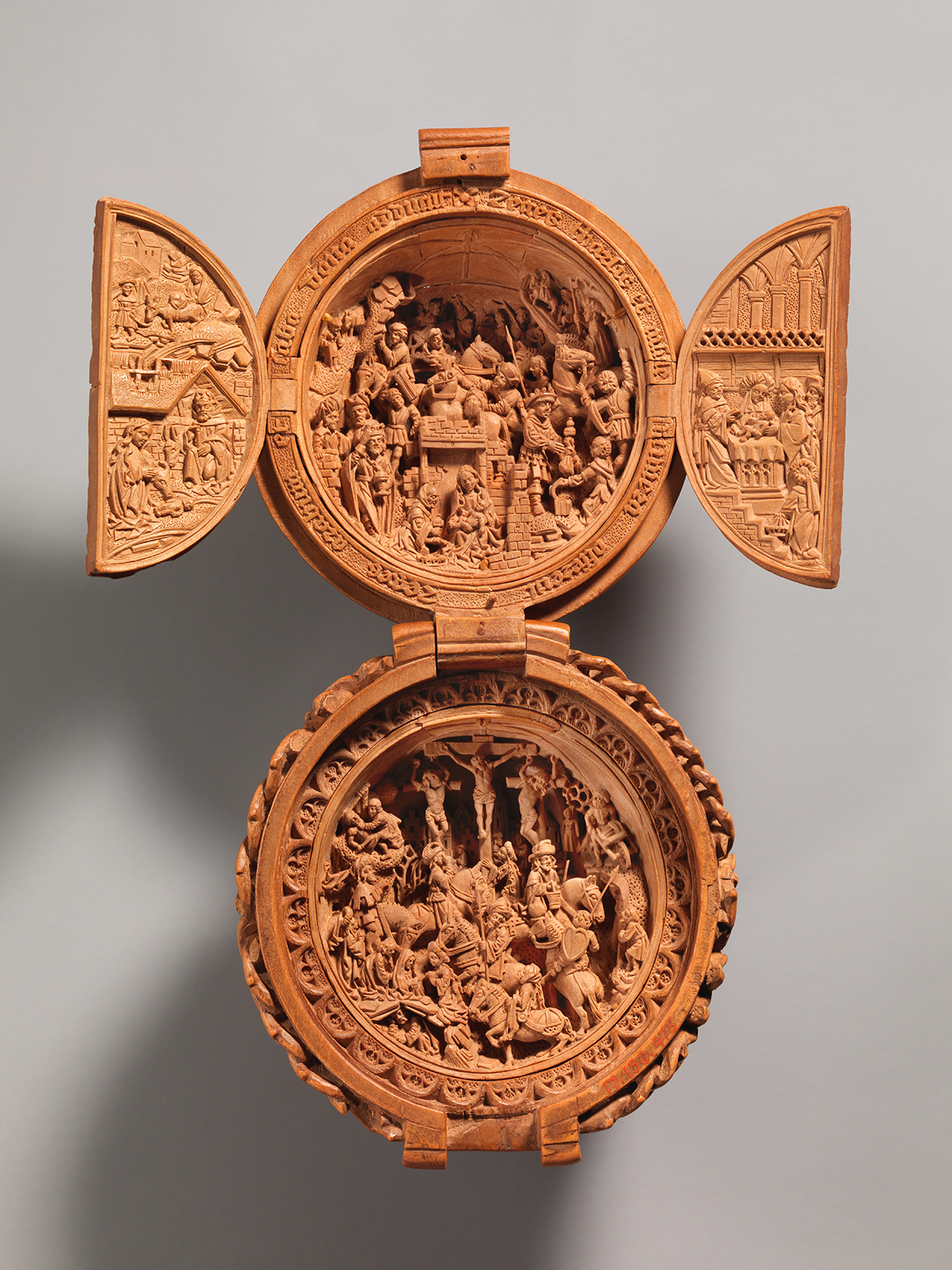 Boxwood prayer bead showing the Adoration of the Magi and the Crucifixion, Netherlands, early sixteenth century 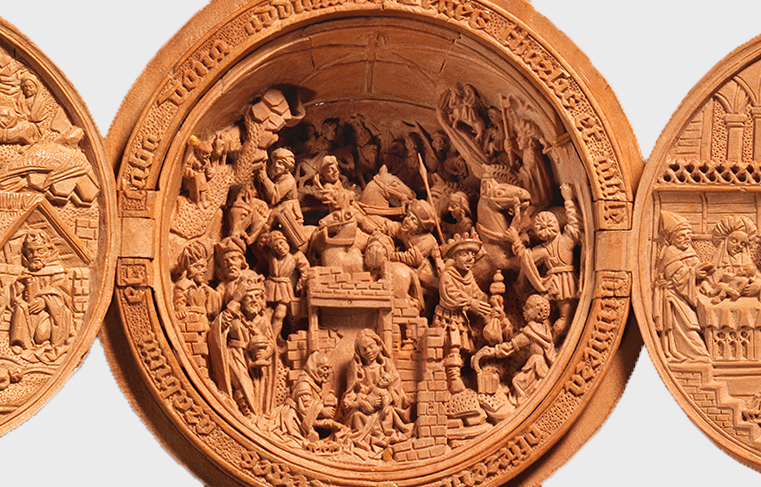 Detail from a boxwood prayer bead showing the Adoration of the Magi, Netherlands, early sixteenth century 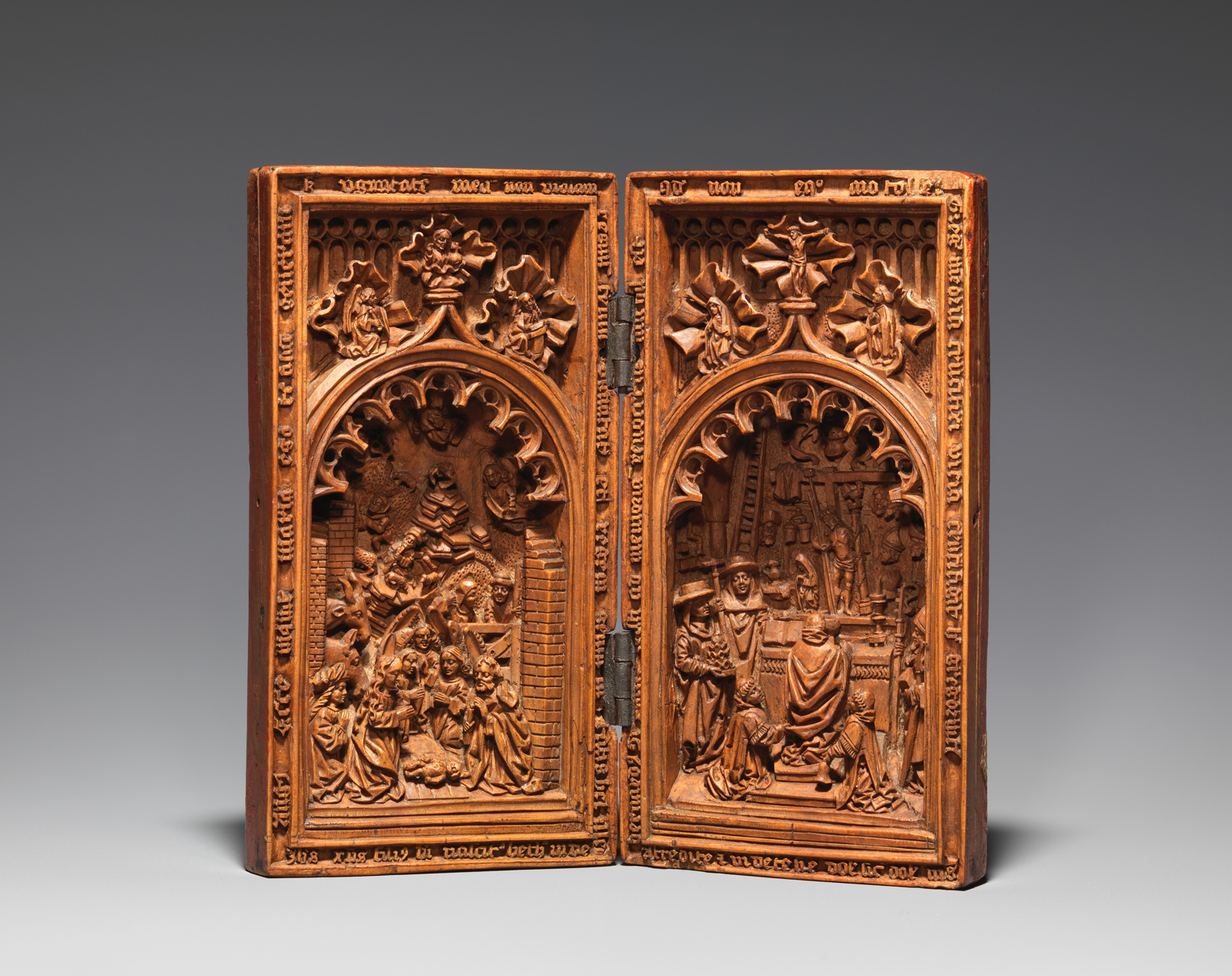 In one extraordinary miniature altarpiece the gothic tracery adorning the central arch curves naturally into the shape of the thorns in Christ’s crown. It frames the scene of Christ’s crucifixion. Every aspect of the minute cosmos that is revealed when the wings of the triptych are parted is invested with emotional meaning, as though the artist wants to remind us that if we look closely, with the right kind of attention, we will see that deep love and deep pain are built into the structure of the universe.

The day I visited the exhibition, the sculptor and author David Esterly, in conversation with the conservator Pete Dandridge, described as “uncanny” the effect of noticing two minuscule horse-riders at the edge of this particular scene looking out at the viewer. I thought of my favorite example of this technique: the sole angel in a heavenly chorus painted by Fra Angelico facing out and summoning me in with a placid gaze. When I inspected the triptych, the effect was even more powerful: being invited into that tiny, remote world was more like looking through a telescope at a star and seeing someone looking back at you. To the Christian owner, it may have seemed like a way of saying, “You can contemplate this ancient story as if it were a distant object. But at the same time you are in this and of this and it is beholding you too.”

To me, the uncanny sensation was that of an alarmingly direct communication from the artist. According to the visitor guide, which is how the accompanying catalog is referred to, it is conjectured that if a single individual made the objects it would have taken thirty years, that is (in those days), an entire adult lifetime of extraordinary patience and meticulous effort. His intentions, written into something so small and so fragile, haven’t yet been drowned out. Even in the relentlessly hectic, electric megacity of New York you can still find them.

“Small Wonders: Gothic Boxwood Miniatures” is on view at the Met Cloisters through May 21.

Tamsin Shaw is Associate Professor of European and Mediterranean Studies and Philosophy at NYU and the author of Nietzsche’s Political Skepticism. (April 2018)

On the freedom and exhilaration of moral insensibility.

The work of magician, musician and tiny-writing master, Matthias Buchinger—who was born without hands or feet in Nuremberg in 1674 and never grew beyond the height of twenty-nine inches—is now on view at the Metropolitan Museum of Art.

Virtuoso of the Tiny

Richard McGuire’s Sequential Drawings: The New Yorker Series is a tribute to the spot illustration, the unsung toiler of the magazine page.

Specters of a Civilization

Martin Gusinde’s haunting photographs of the Selk’nam, Yamana and Kawésqar peoples—now collected and published in The Lost Tribes of Tierra del Fuego—present a way of life that has since ceased to exist.

China’s Sufis: The Shrines Behind the Dunes

Lisa Ross’s photographs are not our usual images of Xinjiang, the turbulent autonomous region in western China. Instead of representing political conflict, they show a little-known religious tradition—its desert shrines to Sufi saints.