David “Chim” Seymour was born in Warsaw, Poland in 1911 as Dawid Szymin, the son of publishers of Hebrew and Yiddish books. A few years after he fled to Mexico, then relocated to New York , his parents and friends were killed in the Holocaust. It is impossible to separate this history from Chim’s development as a deeply empathetic photographer, attuned to the plight of displaced people, refugees, children, and all those at risk during armed conflicts. In a retrospective now at the Jewish Historical Museum in Amsterdam, which includes 150 photographs from before and after World War II, one can see how sincerely Chim believed that photography, by influencing public opinion, could help change the world.

The show opens with a large portrait of Chim by his Magnum colleague Elliott Erwitt, complete with his humorous glance, tilted eyebrows above round glasses, dapper suit, silk tie, and cigarette dangling from his fingers. In 1947, Chim cofounded Magnum Photos with Capa, Henri Cartier-Bresson, and George Rodger. For French magazines, he abbreviated his family name “Szymin” to “Chim”—shorter and easier to pronounce and, perhaps, in order to distance himself from his Jewish past.

Thematic, broadly chronological sections at the Jewish Historical Museum group the various stages in Chim’s development. His career took off when he was sent as a special correspondent to the Spanish Civil War by the left-wing magazine Regards, and he spent the next three years traveling all over Spain.

Although he did cover the front lines, Chim was not a typical war correspondent: he was mostly interested in reporting on the life and fate of ordinary citizens during the first war in modern history in which civilians were systematically targeted by aerial bombing, culminating in the annihilation of Guernica. In one expressive chiaroscuro photograph, the only light in the frame seems to emanate from a group of huddled children, crowded in an underground shelter as Nazi planes were bombing the island of Menorca. The deep shadows make us squint as if we were there with them.

This sensation of immediacy also characterizes an unusual series of three images, taken at close range, of Republican Basque fighters and a priest celebrating an outdoor mass before combat. Looking at these images, we understand that Chim’s photographs draw their power from his ability to tell a story in a sequence. He moves in, first from a bird’s eye view, with the soldiers and priest standing, then to close-ups of the soldiers kneeling and the priest offering communion.

But Chim also excels at the single image: an especially powerful, cinematic photograph, taken from above, shows a woman breastfeeding as she listens, rapt, to a speaker in a land-reform meeting in Estramadura. Land reform legislation was one of the significant issues dividing Republicans from Francoists. The image, which could be read as a “Madonna with Child,” a metaphor for Republican Spain, embodies hope for the future. Published in Regards in France, AIZ in Germany and Nova Ibera in Spain, the image immediately became famous.

As a biographer, I have spent a decade studying Chim’s life and work, but while I was immersed in the minutiae of his life, his images had receded into the background. Seeing his photographs at the Jewish Museum made me reevaluate them. It struck me that this museum, whose modern galleries have been built on the remains of a seventeenth-century Ashkenazi synagogue, is a perfect home for the photographer: the multilayered architecture mirrors Chim’s complex itineraries across time and space.

In 1942, Chim enlisted in the US Army. Based with the APID (Aerial Photographic Interpretation Detachment) in Medmenham, near London, he spent World War II as an interpreter of aerial reconnaissance photography. He analyzed photographs taken by Spitfire aircrafts that flew over Europe photographing any piece of land with potential information about what the Germans were planning.

In 1947, he was able to return to reportage with “We Went Back,” a story commissioned by the American magazine This Week that traced the routes of the Allied troops across Europe. And this is where Chim’s career took a surprising turn: his images burst into color. One shot especially struck me: children building sand castles on Omaha beach in Normandy under the gigantic, whale-like shadow of an overturned landing craft. The machine bisects the blue sky and the yellow sands and towers over the children, casting a shadow of war. In a black-and-white shot taken in Essen, Germany, Chim captured a pram with a baby swaddled in white covers before the looming dark ruins of the city in the background (the caption indicates that he is the illegitimate child of a British soldier). The eloquent but jarring juxtaposition appears almost like a photomontage. A series of twelve photos Chim took in Nijmegen, The Netherlands, had never been printed before. Neijmegen was hit hard during World War II: more than 2,000 inhabitants lost their lives, and almost a quarter of the city’s housing was destroyed. The photographs document the still-visible wartime destruction, as well as everyday scenes of a city in slow recovery. 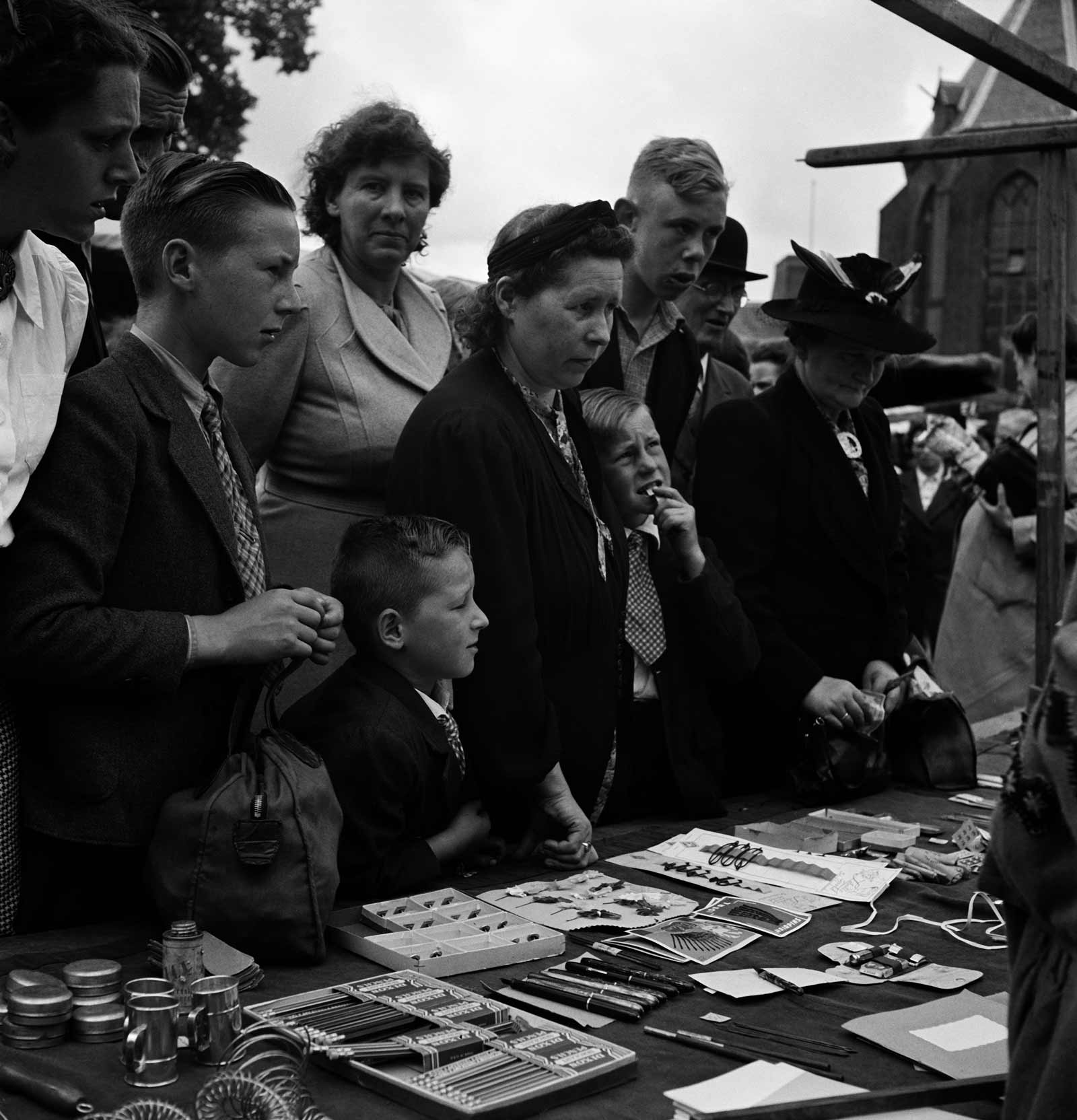 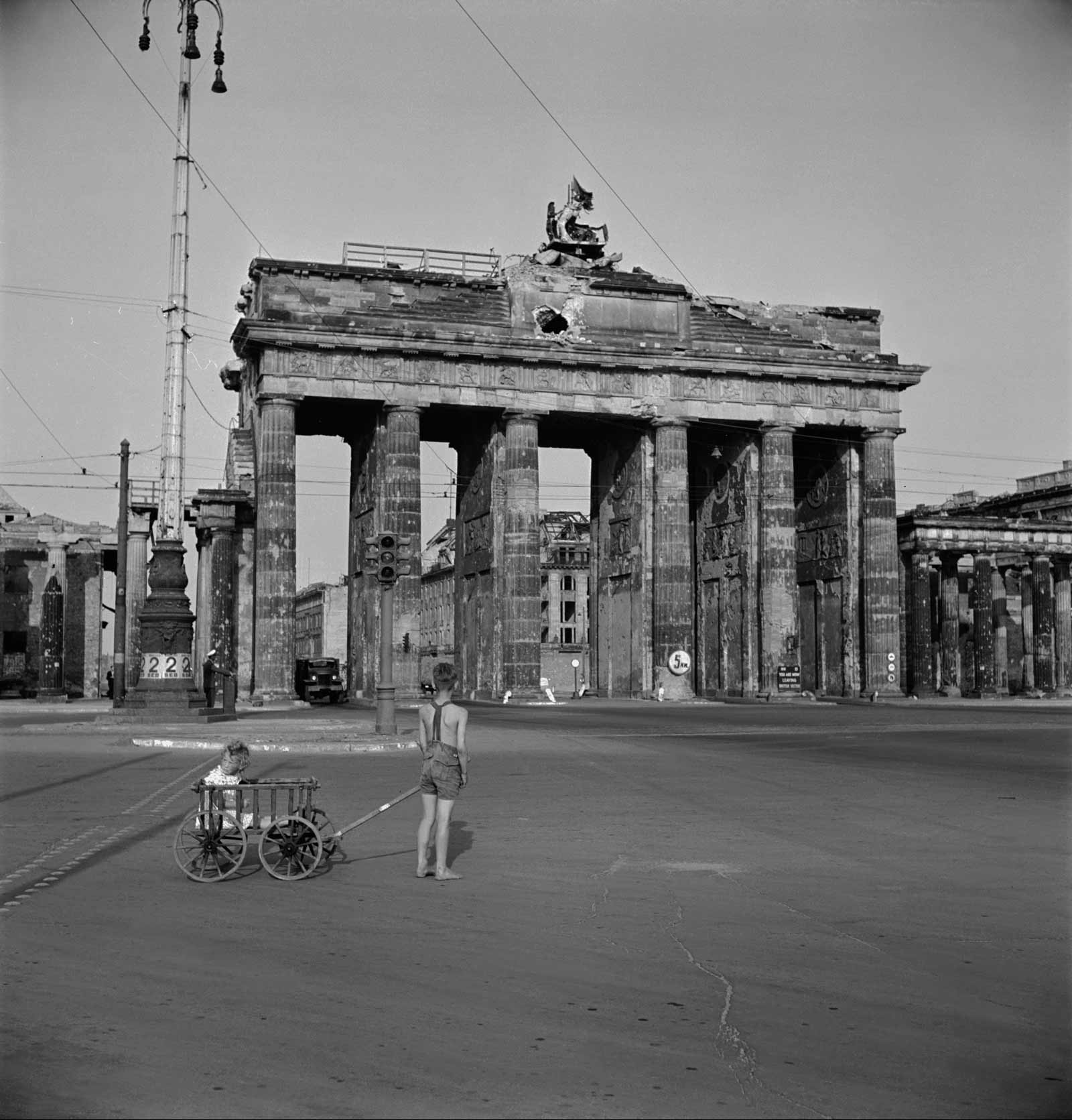 A boy pulling a wagon in front of the Brandenburg Gate, Berlin, 1947 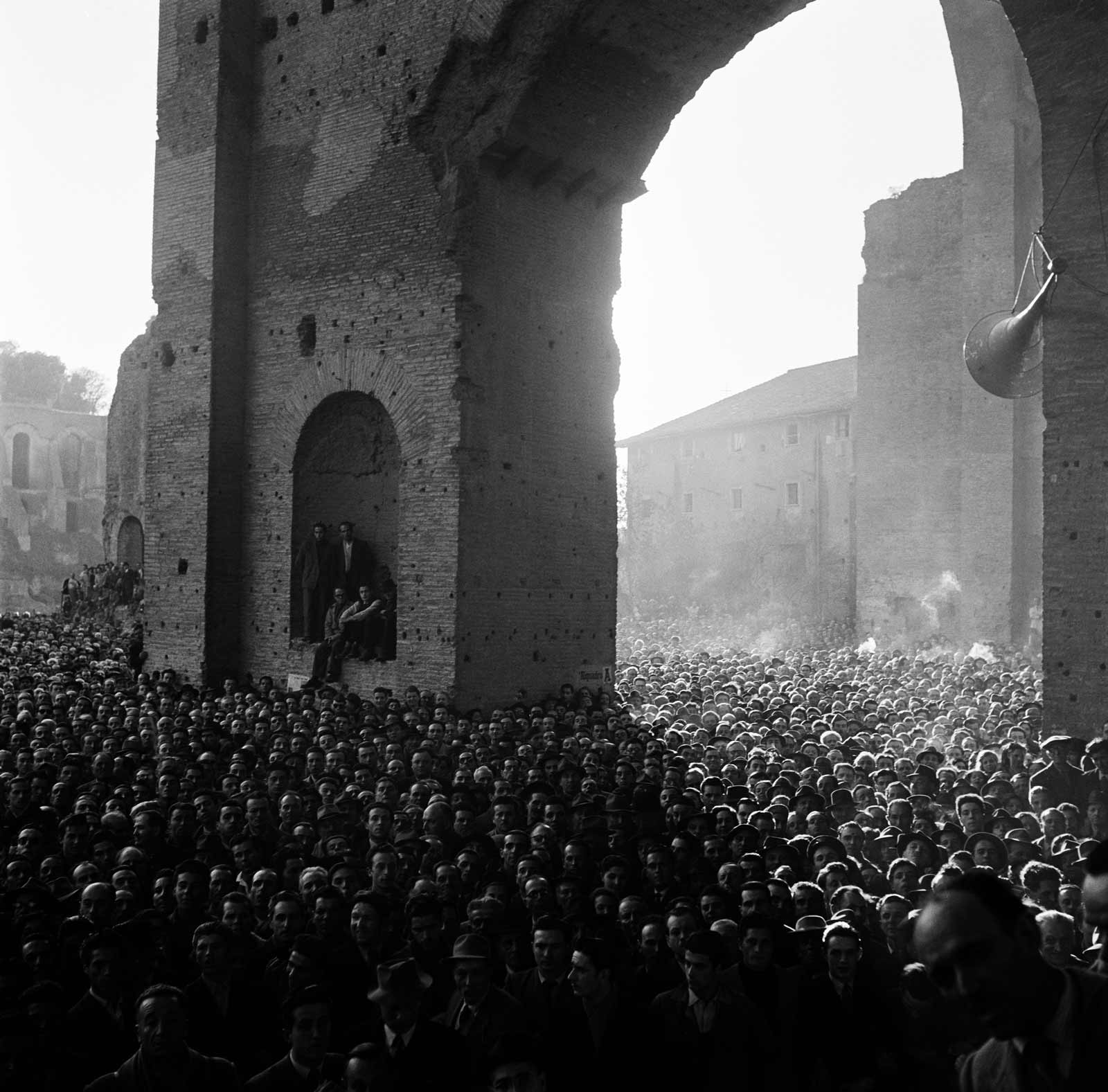 In the spring of 1948, UNESCO sent Chim as a special consultant to five European countries—Austria, Greece, Hungary, Italy, and his native Poland—to report on the fate of the 13 million children who had been orphaned, displaced, wounded, or disabled by war. He traced a sweeping and in-depth portrait of these children who had been stripped of their childhoods. One of these images is instantly recognizable, though it’s likely that few could name its author: Tereska, a Polish girl in a Warsaw school for traumatized children, had been asked by her teacher to draw a home on the blackboard. But all she could produce is a tangled web of chalk lines. As I walk past the photograph, her terrified eyes seem to follow me, posing an unanswerable question. Along with Capa’s 1936 Falling Soldier, this is probably the most emblematic image of mid-twentieth century war. But while Capa’s soldier embodies “Death in the Making,” the title of Capa and Gerda Taro’s 1938 book, Tereska’s face is a powerful reminder that, for many, war would never end.

The UNESCO trip was the last that Chim took in Eastern Europe. Later in life, he couldn’t bring himself to work in the fraught territory of his birthplace. In the early 1950s, he settled in Rome and made witty and warm portraits of the Cinecittà stars, starlets, and producers, both in black and white and in color: Sofia Loren, Irene Papas, Ingrid Bergman and her twins, Roberto Rossellini at work. Though some of his portraits, such as that of Renaissance specialist Bernard Berenson examining a marble nude by Canova, are very strong, this section was my least favorite of the exhibition. It seems to me that during this period, Chim, traumatized by the Holocaust, turned his lens to the more superficial glamour desired by burgeoning illustrated magazines.

In 1950, another assignment from UNICEF brought him to the remote villages of Southern Italy, and, traveling with his friend, the writer Carlo Levi, Chim documented the improvised schools without electricity or heat where the elderly and children alike were taught to read and write by local volunteers. One image shows an old peasant’s hand hesitantly tracing his first letters on a page—that Chim did not show his face, thereby avoiding the risk of stigmatizing his subject, is striking and memorable.

From there, Chim pursued a broader visual investigation of the Italian South, with several stories on religious rituals and festivals. During the early 1950s, he documented the beginnings of Israel. The sense of hope and optimism that he felt the country represented is visible, for instance, in his joyful black-and-white image of an Italian immigrant proudly holding up his newborn girl, the first child born in the barren Alma settlement.

It was in Egypt, where he rushed in November 1956 to cover the Suez Crisis, that Chim met his fate. Four days after the cease-fire, he was killed, along with his French colleague Jean Roy, by an Egyptian sniper. For my biographical research I had interviewed Ben Bradlee, the journalist who was to become editor in chief of The Washington Post, who was with Chim in Suez. As I walked out of Chim’s exhibition and into Amsterdam’s Jewish Quarter, I recalled a scene Bradlee had described of Chim photographing hungry Egyptians stealing from a flour depot:

Men, women, and children were walking around powdered with flour like so many ghosts, up to their ankles in spilled white. I did not see Chim jump very fast out of the Jeep. Then I saw him—he was very small, walking slowly with his camera, chaos all around him… a lone figure, completely calm, clicking away. It was almost in slow motion. He looked at the scene and raised his camera and took these pictures very slowly.

“Chim, Legendary Photojournalist” is at the Jewish Museum, Amsterdam, through March 10, 2019.

Sally Mann’s photographs demonstrate that beauty can exist in the ruins of a destroyed building, a landscape overgrown with weeds, a familiar body made foreign by illness.

J.M. Coetzee gave up photography, he says, because of a lack of empathy and curiosity. But one must take these protestations with a pinch of salt, for he came to understand the way storytelling was driven by not being allowed across a threshold, by imagining what might lurk beyond it.

The Mind of the Photo

Part of the pleasure of a new book of the family photos of Siegfried Kracauer, the Frankfurt School’s freelance intellectual par excellence, is finding in these generally artless snapshots the very sorts of unforeseen correspondences and inadvertent revelations about which Kracauer wrote.

This is the second of two excerpts from *MetaMaus*, Art Spiegelman’s new book of conversations with Hillary Chute about the making of his *Maus* books.