We all wish we could change the past, at least some of the time. Relationships, elections, conversations: there are countless moments in our lives we’d love the chance to rework, or simply reimagine. Living in an era when we can easily tweak the small (delete a sentence, crop an image) but feel helpless when facing the large (political turmoil, climate change), it’s hard not to fantasize about reworking our histories.

But this inclination is not new. Attempting to rework the past, at least on paper, has been the outlet of artists and authors for as long as people have been wishing for different endings. “As If: Alternative Histories From Then to Now,” an exhibition at the Drawing Center, presents eighty-four works from 1888 to the present that “offer examples of how we might reimagine historical narratives in order to contend with the traumas of contemporary life.”

To get to the show, you leave the Drawing Center’s main gallery (featuring the excellent work of German painter Neo Rauch) and descend into the basement, where the historical narratives you’ve known your entire life suddenly recede. A range of media confronts you: books, album covers, magazines, homemade zines, video, and works on paper, all announcing various alarming realities: the triumph of communism in America, a world where mosquitoes compete with humans for dominance, a 1960s London where magic has replaced science, and an alternate universe where Hitler is a West Village beatnik. 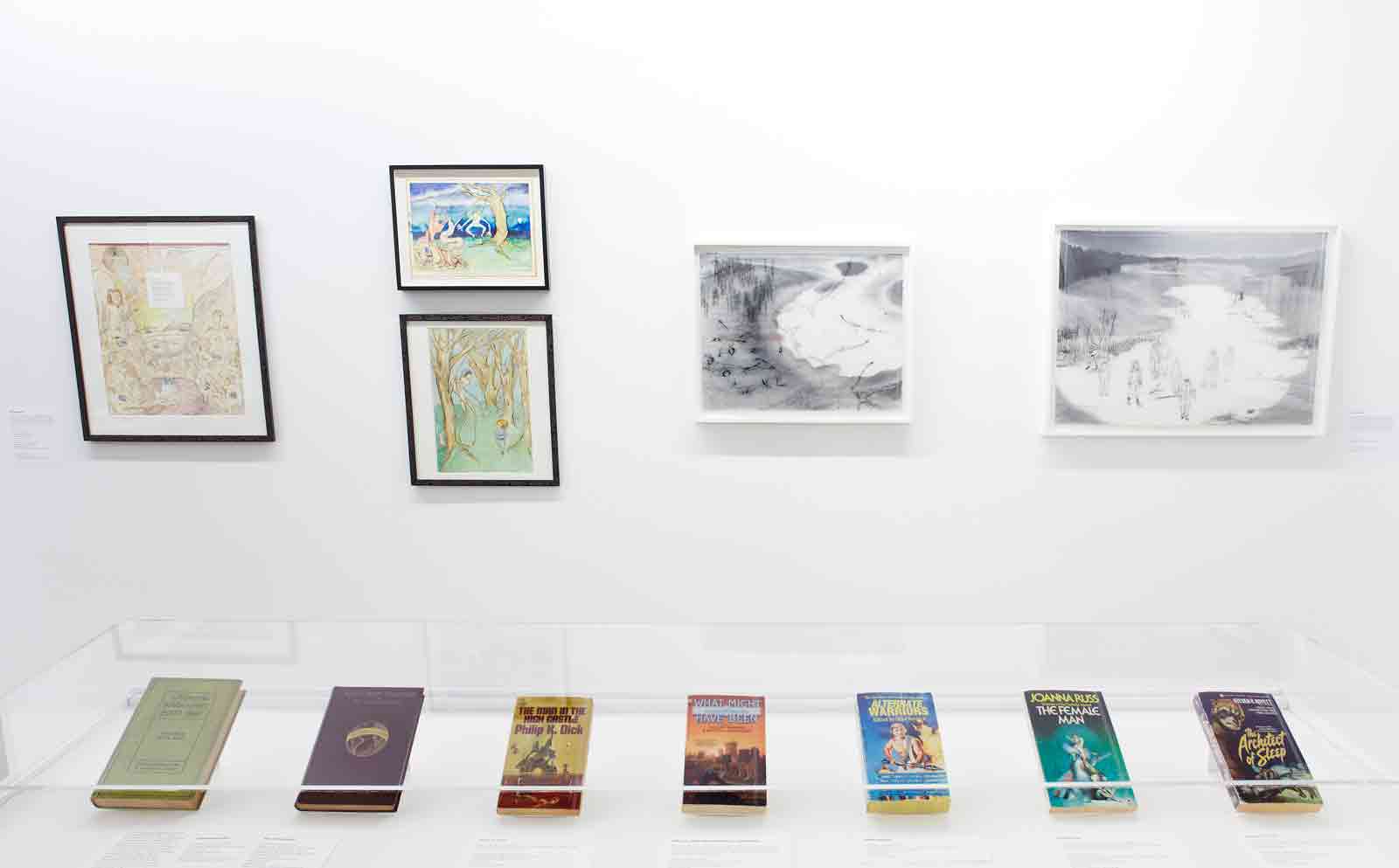 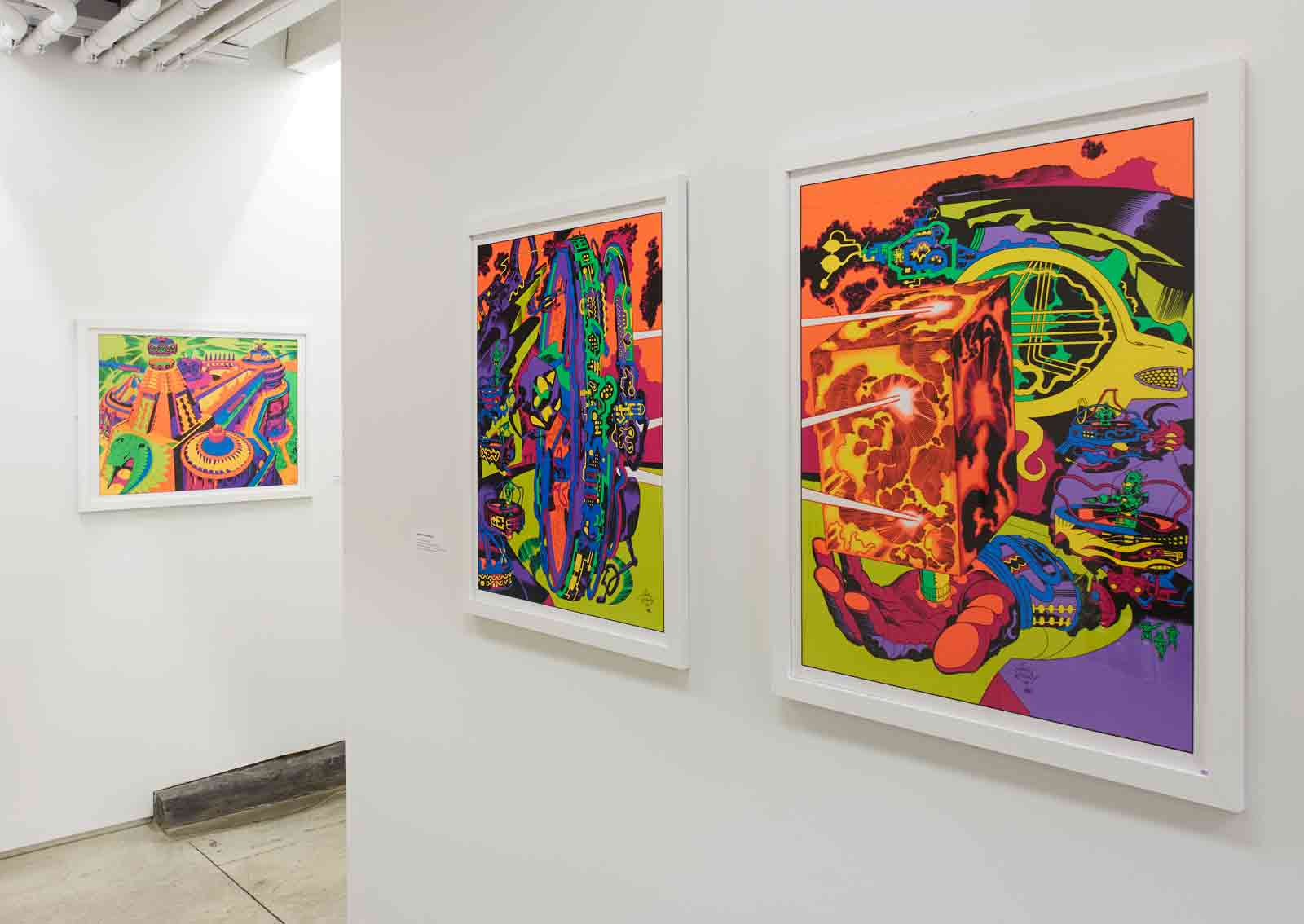 Displays of vintage alternate history (a subgenre of science fiction) paperbacks feature cover designs that range from the absurd, like Gandhi toting a bazooka on the cover of Alternate Warriors (tagline: “This time they’re not turning the other cheek…!”) to the classic, with several notable variations of Joanna Russ’s multi-dimensional feminist sci-fi masterpiece The Female Man, to the pulpy-but-potent, with a cover image of Terry Bisson’s Fire on the Mountain of a futuristic spaceship bursting through the clouds, coming straight at a bewildered Confederate artilleryman.

The piece that for me most strikingly evoked a feeling of history being rewritten was a trailer for the 1964 British alternative history film It Happened Here, which was cobbled together over eight years by British teens Kevin Brownlow and Andrew Mollo (both of whom went on to become historians). The film’s trailer plays on loop in the background of the exhibition like documentary footage. Nazis march past British landmarks, paired with a haunting voiceover:

Along with the clear historical rewrites like It Happened Here, much of the work shown is less interested in specific historical scenarios, and more in the ways broader speculative fiction and science fiction can be a tool for coping with political unrest and persecution. Alternate history purists who come in to the exhibit solely expecting rewritten histories may be disappointed, but some of the exhibition’s strongest pieces are those that use more general science fiction tropes to grapple with what it means to live inside a nightmare that you can’t wake up from.

Among them is Futurian War Digest by J. Michael Rosenblum, a British science fiction zine the conscientious objector made during World War II, featuring spacefaring adventurers, robot love affairs, and more. The police kept an eye on Rosenblum during the war, out of concern that he was “publishing seditious materials and of collecting contraband ink and paper,” the museum wall text explains, but one look at its simple but fanciful black-and-white illustrations, and it’s clear this was simply a creative outlet in the midst of a war.

Also on view is work by Herman Poole Blount, better known as the Jazz musician Sun Ra, one of the pioneers of Afro-futurism. In the late 1930s, Sun Ra experienced a life-altering vision in which he went to Saturn and met aliens, and discovered he was not an Earthling, but actually a citizen of outer-space. Ra’s creation of a new identity allowed him to free himself from societal constraints, or as the exhibition’s free zine puts it: “As an interstellar visitor, Sun Ra wasn’t subject to racial violence–he was someone, from somewhere, else.”

Even images that have no obvious visual ties to science fiction or alternate history provoke questions of other realities or possibilities: Huma Bhabha’s Untitled (2010), a photograph showing a smudge and shadow on a desert landscape, evokes loss, erasure, cover-ups.

The exhibition also showcases artists taking on projects different from the norm—most notably, the Marvel and DC cartoonist Jack Kirby as a galactic Le Corbusier. Lining a hallway is a series of prints Kirby created for an unproduced film version of Roger Zelazny’s Lord of Light. Featuring eye-popping color, Kirby’s gigantic structures feel both futuristic and ancient, with spaceship landing pads supported by colossal statues. Though the film was never made, Kirby’s images had a powerful afterlife: they were used by the CIA as storyboards for part of a fake film production that served as the cover story for the mission to extricate US embassy members during the 1979 Iran hostage crisis. The escape served as the basis for the 2012 film Argo, a rare moment when an alternate history became part of actual history.

Beyond the accompanying zine, the exhibit doesn’t have a catalog, but outside the Drawing Center it’s easier than ever to find authors plumbing the depths of imagined paths, with new thoughts on the ways we’ve lived and continue to: Lavie Tidhar’s Unholy Land, which envisions a Zionist homeland in Uganda, and K. Chess’s Famous Men Who Never Lived, about a community of refugees forced to flee from their dimension to ours after a cataclysm, both capture the uncertainty and sorrow of our moment. We see it on the screen too: besides the likely-shelved and much-derided Confederate, the new film Yesterday imagines a universe where the Beatles never existed.

The work in “As If” is a reminder that our stories, for better or worse, are always open to radical transformation. It’s a relief to see that alternative history and other kinds of science fiction can still offer us ways to imagine new futures and new pasts, even in the grimmest of moments.

“As If: Alternative Histories from Then to Now” is at the Drawing Center through July 28.

Out of modest ingredients the Congolese sculptor Bodys Isek Kingelez creates a whole world, entirely his own.

A Universe of One’s Own