The Greek word chrôma, which often means “color” and gives us various English words in that semantic field, primarily means “skin”—perhaps because the skin, with its changing tones, was the foremost experience ancient peoples had of color at the time that language was forming. One Greek author, Xenophon, uses the word to refer to facial cosmetics, some kind of rouge applied by the Medes to enhance beauty and conceal age. That sense of the word comes close to the one foregrounded at the Metropolitan Museum of Art’s arresting exhibition “Chroma: Ancient Sculpture in Color,” a show that reminds us that ancient Greek and Roman sculptures were not meant to be seen in sober tones of marble and bronze, but rather were adorned with naturalistic skin tones and richly hued clothing. Some, like a crouching sphinx with patterns of red, blue, and gold on its feathered wings and scaled chest—its replica displayed at the Met beside the washed-out original—were even kaleidoscopic.

Traces of color on marble surfaces were noted by the very first antiquarians who uncovered Greek sculptures. In the 1750s the first non-Greeks to explore the Parthenon ruins, the Englishmen James Stuart and Nicholas Revett, observed that the architectural elements of the building had been painted. But friezes and metopes once protected by cornices had already been exposed to sun and rain for decades, after offshore shelling by the Venetians had blown off the roof. By the time the segments of frieze today known as the Elgin Marbles reached England in 1805, even the celebrated physicist Michael Faraday, called in to address the problem of preserving the marble surface, was convinced that the original condition of the stones was “a state of purity and whiteness.” But sculptures with hues that had been protected by earth and rubble kept coming to light. A pedimental figure of a serpent with three human heads, unearthed from the Acropolis toward the end of the nineteenth century, bore at the time of excavation bright tones of blue and red that are still visible today, though very much faded from what a 1904 sketch records.

Yet by then an image of classical sculpture had already taken hold in Western minds, one that did not include color. Renaissance sculptors who imitated the Greeks, and later artists like Bernini and Canova, created works in gleaming white marble with blank eyes. Faraday’s conjunction of whiteness and purity, reflective of biases of the day that connected lightness of skin to moral virtue and (in the case of women) to chastity, was reinforced by these neoclassical works and by paintings and lithographs depicting Greco-Roman artworks as stark white. Just upstairs from “Chroma” in the Met’s hall of European paintings hangs Jean-Léon Gérôme’s Pygmalion and Galatea (ca. 1890), a striking example of these associations. The Greek sculptor Pygmalion is shown laboring over a statue with such ardor that he brings the stone to life. Galatea is shown becoming flesh, but retaining the luminous whiteness of the marble from which she was carved. Loveliness, in both the statue and the woman, seems inextricably linked to that whiteness.

A commitment to the marmoreal style that was believed to be the hallmark of Greece and Rome made evidence of ancient painted sculpture hard to accept and even created roadblocks to research, according to the German archaeologist Vinzenz Brinkmann, the foremost modern proponent of polychromy. “It was above-all ideological-aesthetical motives that obstructed an intensive study,” Brinkmann wrote in Gods in Color: Painted Sculpture of Classical Antiquity, an edited volume that arose out of a landmark 2003–2004 exhibition at the Glyptothek in Munich. In that show, which later traveled to other European museums and to the Harvard Art Museums, Brinkmann brought the fruits of his career-long investigations before the public. The exhibition at the Met consists largely of selections from the material presented in that earlier show, with some new work added to it.

In Gods in Color Brinkmann lays out the advances in technology that have bolstered the case for polychromy in ancient sculpture, research that is in part laid out in the Met exhibition’s wall texts and in its concluding film loop. Even when not visible to the naked eye, the colors of Greek and Roman marbles have been detected using stereomicroscopes and microscopic copying lamps that can reach into deep folds and crevices in the stone, as well as by chemical tests. Bombardment by UV light or raking light, in a high-intensity beam devised by Brinkmann such that it passes through a slit and hits the subject obliquely to minimize reflection, can reveal “color shadows” produced by the different rates at which painted and unpainted stones are eroded by wind and weather. In recent years the digital microscope has been added to the toolkit of color hunters. But the most crucial advance in the field of ancient polychromy, according to Brinkmann, “is not the lighting technique…that guarantees success in systematic examination, but the approach of the examiner without preconceived ideas: the traces of painting reveal themselves only to someone prepared for the unexpected.” 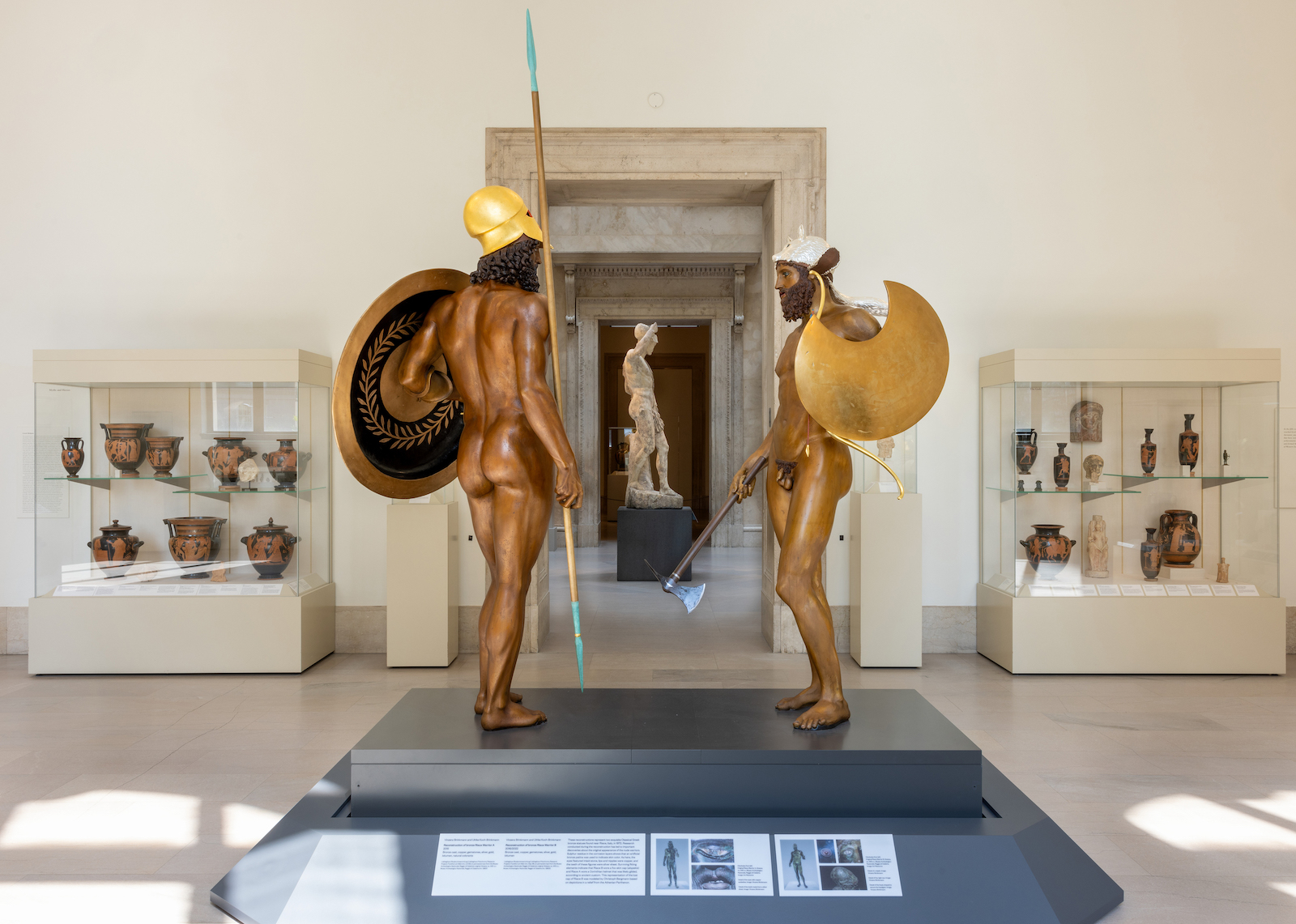 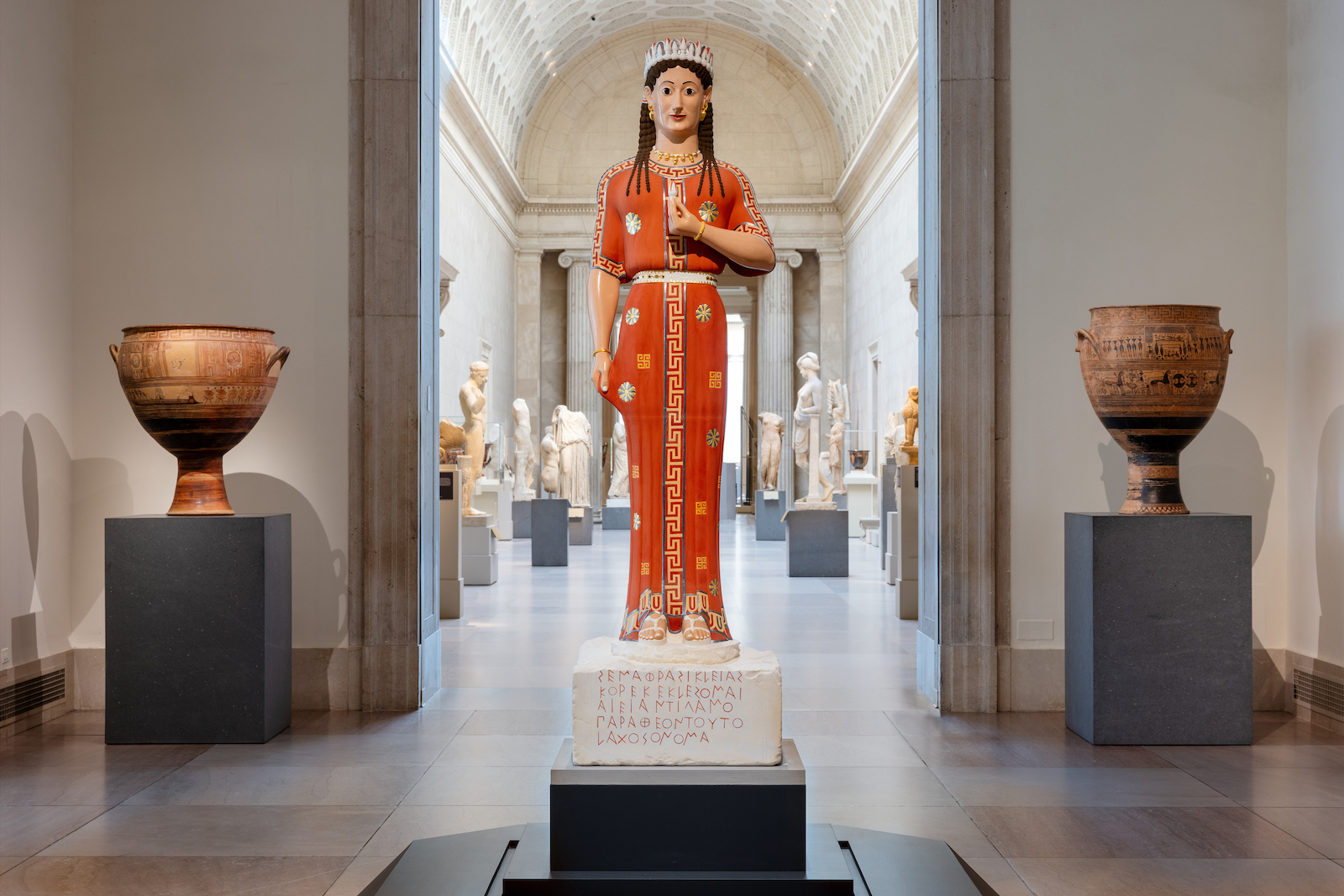 Reconstruction of the marble funerary statue of Phrasikleia, 2010/2019 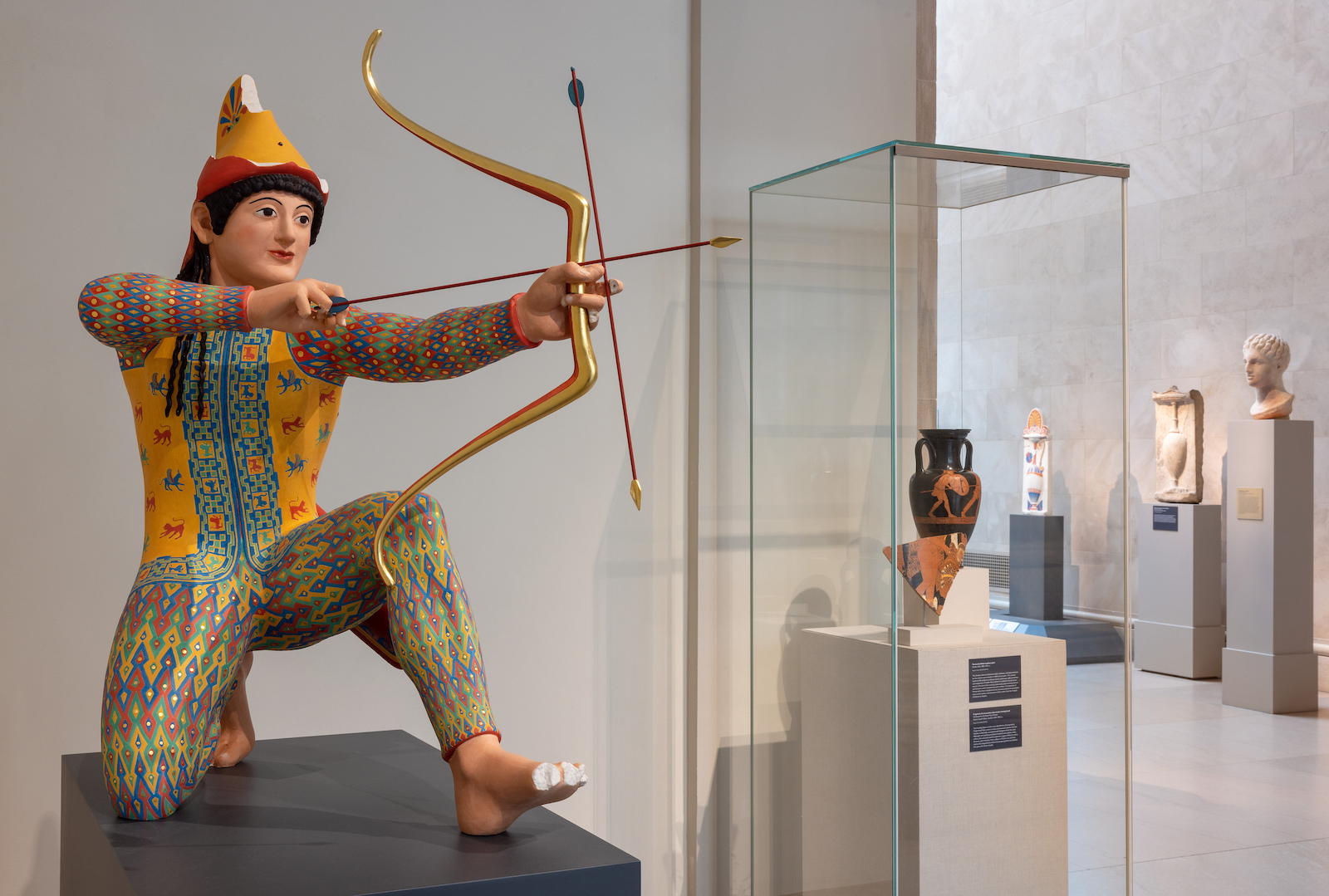 Reconstruction of a marble archer from the west pediment of Temple of Aphaeia, 2019

Brinkmann began in the 1990s to dramatize his findings by producing painted replicas of ancient sculptures in collaboration with his wife, the archaeologist and art historian Ulrike Koch-Brinkmann. The fruits of their reconstruction efforts have been set up in various rooms of the Met’s Greco-Roman collection, ingeniously juxtaposed with the monochrome off-white stones and green-tinted bronzes that otherwise dominate those galleries. Two korai, Greek statues of young women standing and smiling serenely, take on a new vitality with colorfully patterned clothes and headdresses, pinkish skin, and expressive eyes. A bas-relief battle scene, from one side of the exquisitely sculpted Alexander sarcophagus, shows newly emphatic contrast between Persian soldiers, clad in motley tunics and leggings, and their monochrome Macedonian foes, naked except for their helmets. At the spot where a fallen Persian is being stabbed with a dagger, we see the red of his blood—a detail that brings home to the viewer the violence of combat.

The brightness and saturation seen on the Brinkmanns’ models create a frisson of surprise as one wanders from room to room, an effect that some will find pleasing and others disturbing. Many visitors to the original Glyptothek show found the images “tasteless,” according to a 2018 article in The New Yorker; a Stanford art historian Fabio Barry implied that the Brinkmanns had deliberately overdone their colorizations in order to make a point. (Even the most advanced color detection techniques, after all, cannot measure original brightness or saturation.)

Brinkmann anticipated such adverse reactions to his work but attributed them to a residual attachment to the stark aesthetic of neoclassicism. “This project will be reproached with having ventured into the realm of fantasy,” he wrote. “One usually invokes these realms of fantasy so as not to have to enter into them.” Visitors to “Chroma” who are accustomed to sand-colored stones may indeed feel they have entered a bizarrely unfamiliar world, like Dorothy stepping out of black-and-white Kansas into Oz. The Brinkmanns meant to startle the world of art history out of centuries-old preconceptions, and the arrangement of their models amid a familiar landscape of bleached marble allows them their full impact. “Chroma” makes clear that ancient sculpture can never be fully appreciated without an understanding of its original polychromy.

“Chroma: Ancient Sculpture in Color” is at the Metropolitan Museum of Art through March 26, 2023.

James Romm is the James H. Ottaway Jr. Professor of Classics at Bard. His next book, Demetrius: Sacker of Cities, will be published in November. (October 2022)