The Crisis of the Seventeenth Century: Religion, the Reformation and Social Change

Trevor-Roper’s work is always a challenge to the reviewer; it is brilliant, bitty, and bitchy, and what it all adds up to is difficult to say. His brilliance is never seriously questioned, except by his personal enemies, but is he a brilliant historian? Our sons and grandsons may think not, and though as Regius Professor of History at the University of Oxford he is now at the top of the academic tree he has never produced that solid, distinguished corpus of work expected of a man in his position.

In 1940, at the age of twenty-six, he published a life of Archbishop William Laud which displayed the gifts of his late maturity to the full; it is not distinguishable in style, manner, or approach from the essays in this book, written more than twenty years later—which means it is very good indeed. It is an entirely up-to-date book, which could have been written in the last few years. So he served no apprenticeship, and apparently needed none, nor was his work recognizably modeled on any of the great Oxford seventeenth-century historians of the previous generation, like Firth, Clark, Feiling, or Ogg. But his career was interrupted by war service, and he has never settled down again in the seventeenth century. The Last Days of Hitler, a by-product of his work for British Intelligence, was a deserved best-seller, and his editions of Hitler’s Table Talk, Hitler’s War Directives, Hitler’s Political Testament, and Martin Bormann’s Letters show his continuing interest in Nazism and the Second World War. In the 1950s he made occasional excursions into seventeenth-century history, and some of these excursions are reprinted here, but the great Trevor-Roper opus on Cromwell (or the Independents, or the Interregnum as a whole), which was to be the book to end all books on the English Revolution, has not yet reached the printers, though rumors of its progress—even its completion—are constant, and many of us even know people who know other people who have read parts of it in typescript.

Will this remain one of the great unwritten books, like Lord Acton’s History of Liberty? Apart from the difficulty he apparently has in writing anything longer than an essay—even his recent research on George Buchanan was published in novella form—Trevor-Roper has been showing other Actonic symptoms. His recent enthusiasm for historiography is alarming, and so is his collection of Gibbonian lectures on The Rise of Christian Europe. Nothing doomed Acton to sterility so much as the notion that no one could write any history unless he knew all of it. Trevor-Roper is now in the equivocal position for a professional historian of having edited more books than he has written, even counting collections of essays.

OF COURSE, Trevor-Roper is not a professional historian in the sense that Geoffrey Elton (or for that matter Wallace Notestein or Lawrence Stone) would use the term. Though much of his work is in the form of arguments with fellow historians, it is not really directed at them at all; he is debating before a wider audience, and many of his opponents are just props. In his inaugural lecture at Oxford he declared that the essential function of history was to be “useful and controversial,” and the fact that so much of his work is controversial does not mean that it is not intended to be “useful” in the wider sense. The function of much of his work is therefore interpretive. He is adept at bringing together the results of the latest research and setting them against accepted ideas, and the result is not so much a synthesis as a re-orientation: any subject he touches is at once hung in an entirely new frame, or placed in a new light.

A case in point is the long essay on “Scotland and the Puritan Revolution,” reprinted here. Really there is nothing organically novel in it; in fact, to judge by the sparse footnote references, it is based on a handful of printed sources (mainly Baillie’s Journals) and a few basic work like Terry’s Cromwellian Union. Yet no one could deny that this is a brilliant piece of reinterpretation which challenges further research and has done more to open out the history of seventeenth-century Scotland than any other work that has appeared in this century. The same, mutatis mutandis, can be said of his essay, “Oliver Cromwell and his Parliaments.” In “The Fast Sermons of the Long Parliament” he demonstrates another aspect of his virtuosity, for this valuable paper is based almost entirely on the fast sermons themselves, which no one else had thought to study, cemented firmly together by his unrivaled knowledge of men and events in the 1640s.

HIS ESSAY technique is well-established, by now almost formalized. First, the theories of the “others,” the outsiders—his predecessors, his rivals, or just seventeenth-century contemporaries—are displayed in long, swaying sentences which disguise the Procrustean work of summarization. Suddenly, they are dropped, and the inquisitor enters. Fallacies are exposed, scorn cast; the sentences are choppy and urgent, rhetorical questions stab and sneer. Then another abrupt switch to the Trevor-Roper interpretation, which is not only plausible and fashionable, but also intelligent—the healing pill offered by an all-wise physician, his fingernails academically scrubbed, his profile clean-cut, clean-shaven and after-shaved. With biting logic the new interpretation unfolds: everything is explained, no loose ends are left hanging; the clarity is blinding, the wit omnipresent but not ostentatious, the self-confidence overwhelming. The reader is not only convinced, he is left wondering how any other interpretation could ever have been remotely considered.

He is one of the most brilliant writers of English prose alive, in any sphere. His touch in minor details is unerring, and his metaphors never swallow their referred subject; the image of Cromwellian backbenchers as “clumsy old bluebottles caught in the delicate web spun by nimble radical spiders” is witty and accurate, yet it does not enmesh us in consideration of arachnidae and insectae. His sketch of Oliver Cromwell’s last speech to the first Protectorate Parliament is a lesson on how to dispose of intractably dull material in phrases that are not only amusing but accurate:

The surprised and indignant Members, scattered before their time, went out from his presence overwhelmed with turbid oratory, protestations of his own virtue and their waywardness, romantic reminiscences, proprietary appeals to the Lord, and great broken gobbets from the Pentateuch and the Psalms.

Like his acknowledged master, Edward Gibbon, he relishes nothing so much as ecclesiastical idiocy, and a ripe subject like the Schoolmen’s opinions on the sexual capacity of the Devil brings forth a long, rollicking paragraph which is quicker in style, lighter, and more nervous than the Master, but still recognizably Gibbonian. It ends in triumphant glee:

Some important theologians conjectured that the Devil equipped himself by squeezing the organs of the dead. This view was adopted (among others) by our own King James. Other experts advanced other theories, more profound than decent. But on the whole, Holy Mother Church followed the magisterial ruling of the Angelic Doctor, St Thomas Aquinas. According to him, the Devil could discharge as incubus only what he had previously absorbed as succubus. He therefore nimbly alternated between these postures. There are times when the intellectual fantasies of the clergy seem more bizarre than the psychopathic delusions of the madhouse out of which they have, too often, been excogitated.

“The European Witch Craze,” from which this extract is taken, is the longest, the most recent, and in some ways the most valuable essay in the book. Again, it is a work of popularization in the sense that he is synthesizing for the benefit of those less well-read than he the literature of witch-lore, ancient and modern. He rubs in the fact that the witch-craze rose to its terrible climax, not in the superstitious and backward looking Middle Ages, but in the seventeenth century; it spanned the age of Descartes, Hobbes, and Milton, and overlapped the Age of Enlightenment. It is a case study in the acquiescence of a civilized, cultured, and intellectual society in the lowest and cruellest manifestations of superstitious ignorance.

THIS IS ONE of four essays reprinted here on the Crisis of the Seventeenth Century. This is a broad subject upon which, in most countries, no deep research has been done; in the meanwhile, within the limits of the scanty evidence available, much of it literary, any man’s opinions are as good as any others, and much depends on the skill with which they are presented. This is the kind of field in which Trevor-Roper shines, and he in unconcerned by the polemics some of his contributions have aroused—after all, history should be “controversial” as well as “useful.” The debate continues, and though some reject Trevor-Roper’s theories of the General Crisis they have not been refuted (though in an area so devoid of fact refutation is difficult; one can reject the Virgin Birth, but one cannot refute it). His ideas are not disliked as much as their author is, and he shares the unpopularity of Macaulay and Gibbon in their day, and for the same reasons: he is over-confident, roundly dismissive of his colleagues, and usually right. Infuriated opponents could well apply to him his own description of the European princes of the Renaissance:

They are more exotic, more highly coloured than their predecessors. They are versatile, cultivated men, sometimes bizarre, even outrageous; they bewilder us by their lavish tastes, their incredibly energy, their ruthlessness and panache.

He is a Whig historian in a world which, when it is not Marxist, is Tory. The very terms “Whig” and “Tory” may seem outdated and laughable, but Trevor-Roper stands in the direct line from Gibbon and Macaulay, rightly by-passing Trevelyan, the great mollifier. He reveres Gibbon and Macaulay not only because of their technique but because of their ideas, and it is his contempt for spiritual concepts, his devotion to what he calls in Gibbon “the sociological approach to religion,” his ruthless insistence on practical politics, which anger a generation of historians who are more old-fashioned than they think and who have grown accustomed to treating religion with awed respect because they cannot believe in it themselves.

Like Erasmus—and Erasmus, much more than Aquinas, was surely the First Whig—he rejects the Reformation as a solution to contemporary problems at the same time as he dismisses the authoritarian concepts of the Medieval Church. It is owing to no accidental perversity that Erasmus is his hero, introducing himself into every discussion. Moreover, his work is pervaded by an insistent anticlericalism; like Gibbon, he has an exquisite sense of the ridiculousness, the unseemliness, of revealed religion. This is healthy up to a point. There is a tendency still, and especially in America, to equate Puritanism with Protestantism, Protestantism with Progress; but it is only a short step to the muscular non-Christianity so often criticized in Macaulay, or the petulant anti-Christianity which is the mark of modern sentimentalists like Rowse.

So, while it is a sign of Trevor-Roper’s stature than he can be associated with men like Macaulay and Gibbon, it is still difficult to compare him with them. His implicit claim to be accepted as a philosophic historian breaks down on the nature of his oeuvre; his Decline and Fall, or his History of England, is yet to come. 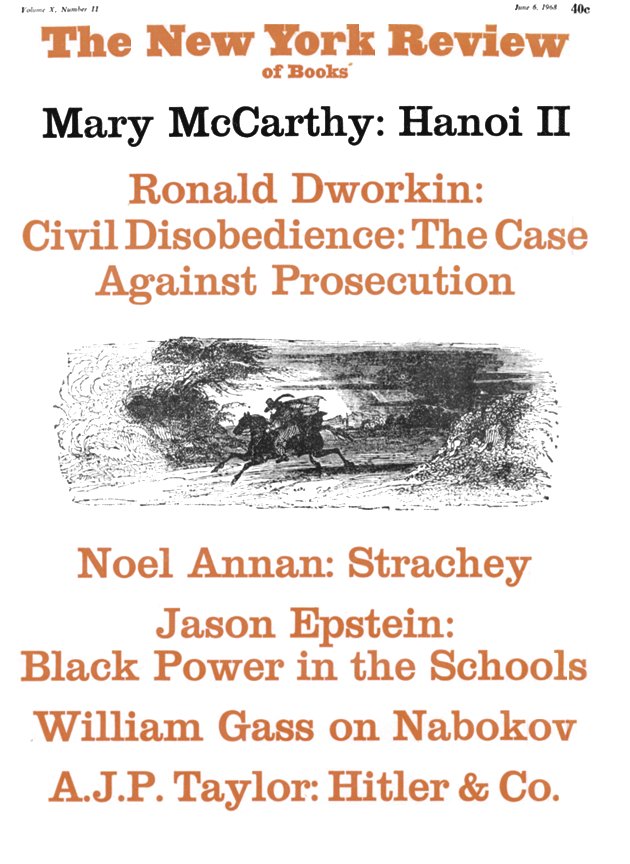 All the Way with Henry the K

All the Way with Henry the K