While in full agreement with much of what Christopher Lasch has said in his debate with Staughton Lynd on the needs of the radical movement I was somewhat dismayed by his presentation of American foreign policy dynamics as well as his intemperate SDS-baiting….

I would submit that both major parties are imperialistic. Within each there are ideological imperialists (Goldwater and Maddox) and economic imperialists (Rockefeller and Kennedy). The Democrats incline somewhat towards the economic side since they are now the party of multinational corporations seeking liberal trade policies to penetrate more foreign markets. The Republicans by 1964 attracted national corporations, fearing foreign competition and foreigners in general. In any case, neither party is likely to enter the imperial road with reluctance. That is why a socialist party is necessary. The anti-war Democrats feel Vietnam was a mistake because it is hopeless. They are not about to dismantle the rest of our empire.

As for Lasch’s remarks on SDS, I think they are both exaggerated and counterproductive. Having attended the 1968 East Lansing Convention as an observer (now a dues-paying member) I was happily surprised to find a great deal of rational debate particularly in workshops at which local organizers could discuss their experiences. SDS is still a decentralized organization and floor demonstrations by one or two local chapters do not reflect upon the style of the organization as a whole (I might add that the Motherfuckers, despite their bizarre methods, did raise some valuable perspectives on the movement). The endless arguments on the role of the “old” and “new” working classes were examples of fruitful intellectual exchange. Marcusians and direct action contingents were paid respect but not treated with awe by the body. Progressive Labor held its own, though they are indeed a humorless lot who subscribe to its dogma.

I might add that the writer who commented that SDS members “automatically feel excluded when rational debate threatens to break out” was Tom Milstein, a YPSL leader who penned the remarks for Dissent, that militant socialist organ which automatically feels threatened when radicalism breaks out. Of YPSL it is only necessary to explain that Michael Harrington and Bayard Rustin are among the intellectual guides when they are not playing footsie with Center liberals.

I would like to suggest that while there are anti-intellectuals in SDS there is a respect for genuine radical intellectuals, such as Carl Oglesby, who attended the meetings. Many delegates stayed away from Chicago because they saw no point to “confrontation politics.” I am inclined to agree with that view, though not dogmatically. SDS is in need of a radical program, and it would be wonderful if men like Christopher Lasch and Eugene Genovese (whom I suspect shares similar views on SDS) decided to present their ideas on this matter at the next convention instead of going to the Socialist Scholars Conference where there is much discussion of theory but little concern with its implementation. Socialist scholars must enter a dialogue with SDS, not engage in fraternal squabbles at a time like this. Radical academicians will truly be welcome at local SDS meetings as well. Only there can they influence strategies and tactics they find unwise.

My remarks about SDS were too sweeping. No single statement, whether in praise or condemnation, can describe a movement as diverse and decentralized as SDS remains. I was speaking of a single tendency in the New Left, one that can be identified not only in SDS but in other radical organizations.

That this tendency exists, my critics do not deny; they themselves speak of “anti-intellectualism,” “infantile leftism,” and “elitism” in SDS. The question, then, is whether these things represent a growing tendency in SDS and beyond that, whether SDS by its very nature does not unavoidably encourage their growth.

The fear that prompted my exaggerated criticism of SDS is that a radical movement based largely on the search for pure and “authentic” expressions of personal alienation, and therefore incapable of understanding the needs of the rest of the community or of developing a social vision that would gain widespread support, tends to generate within itself, particularly in times of discouragement and defeat, an irrepressible demand for sectarian purity. Because they themselves tend to define the movement as a body of believers which grows not so much by widening its base of support as by winning new converts to the faith, many SDS intellectuals may find themselves unable to resist those who clamor for a radicalism pure and unsullied. Unless they consider their own conception of what it means to be a radical, they may find it more and more difficult to conduct discussions in SDS of how, for instance, revolutionaries can work for specific reforms without losing sight of their long-range objectives. There are people in SDS who are eager to press this question, because they know that radicalism cannot build a mass basis without addressing itself to the immediate needs of its prospective constituents. But there are many others for whom every such debate raises the specter of “co-optation.” What disturbs me is the possibility that SDS, by the very nature of its guiding conceptions about itself, may tend increasingly to reflect the latter point of view.

“Pride and communion,” Oglesby writes. “That’s what the Movement is about.” Addressing himself to the McCarthy supporters whom he hopes to win over to radicalism, he tells them that in order to become radicals “you will have to go inside yourself first to rediscover the feeling of your own possible freedom, and from there to the feeling of the possible freedom of others.” Elsewhere he accuses them of being “afraid of your own politics” and of “employing the McCarthy campaign as a means of making your dissent look respectable and ‘legitimate”‘ (New Left Notes, Aug. 19). This essentially subjective and pietistic conception of radicalism as self-discovery and companionship, so pervasive in SDS from the beginning, betrays the movement’s origins in the civil rights movement (only the more generous impulses of which it has outgrown, while retaining the sentimentality) and, more distantly, in the tradition of middle-class evangelical radicalism. This legacy is a serious handicap. The modern socialist movement originated precisely in a critique of evangelical and “vulgar” socialism, the radicalism of “hollow phrases” and labels (as Marx put it in the Critique of the Gotha Program) “by which the true believers recognise one another.” Until the New Left absorbs the Marxian passion for exactness and clarity and for theory not as a means of “radicalizing” people by exposing their moral complicity in a corrupt system but as a means of creating a higher consciousness—until then the New Left will not only fail to win to itself a wider following but may increasingly fall victim to the influence of those in whom radical piety has degenerated into a destructive frenzy—self-proclaimed nihilists who are “proud of it, proud of it!” and who “want to fuck this goddam country,…break what we can. Make as many answer as we can. Tear them apart.”

At the SDS meeting at which these words were reportedly spoken (New Republic, Dec. 9, 1967), the advocates of violence and destruction were vigorously challenged by those who argued that “demonstrations simply alienate us from other people” and that radicals should “educate people first so that they can understand what we are demonstrating against and why.” For every nihilist in the New Left, there are serious people committed to long-term radical politics. My fear is that the “infantile leftists” will command an influence increasingly disproportionate to their numbers as long as their opponents are unable to offer not merely exposure of the “system” or appeals aimed at middle-class guilt but an alternative program and an alternative culture, a new way of looking at the world that will make the old ways appear unconvincing by comparison. 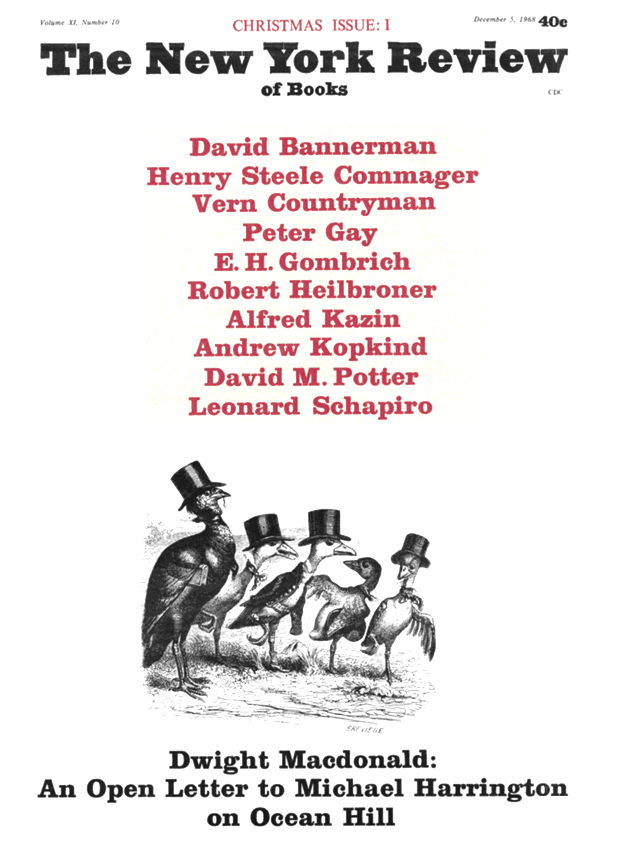 Dreams of the Sixties

An Exchange on Resistance