Rationale of the Dirty Joke: An Analysis of Sexual Humor. First Series

Some years ago the present reviewer acted as an experimental subject in a research project on the physiological effects of alcohol. He was put into a room alone and made to drink the equivalent of ten sherries in as many minutes and then spend the hours in which he returned to sobriety performing a number of totally uninteresting mechanical tasks. He now feels much as he did then, after having read studiously and seriously more than 2,000 dirty jokes at the rate of some 150 an hour under conditions totally unlike those in which they are ever spontaneously told.

It is, however, not Mr. Legman’s intention to entertain his readers, or even to provide them with a collection of dirty jokes available for use on appropriate occasions, even though the format he has adopted, with the jokes printed in italics so that they can be picked out easily, will enable readers who so wish to use his book pornographically. On the contrary his intentions are serious and honorable, and this book is offered to the public as a psychoanalytical and sociological study.

Mr. Legman starts from the assumption that all humor is aggressive and that the function of jokes, whether clean or dirty, is to enable the teller to get away with an attack on the joke’s victim by getting the listener to connive with him, and to express his connivance by laughing. Since, for reasons which Mr. Legman does not satisfactorily explain, most dirty jokes are told by men and are about women, his central thesis is that dirty jokes are essentially a vehicle for men to express their hostility to women. In support of this theory he quotes Freud’s statement that “The smutty joke is like a denudation of a person of the opposite sex toward whom the joke is directed.”

Although Mr. Legman reports hundreds of dirty jokes to which this formula is applicable, the material presented by him, and indeed the interpretations offered by him, show clearly that hostility to women is far from being the only motive underlying sexual humor. Indeed, immediately after propounding the hostility-to-women theory, Legman himself advances an entirely different, and to my mind more convincing, theory of sexual humor: viz., that it constitutes “the attempt to make understandable, or at least believable, even endurable, if only as a ‘joke,’ ” a “highly-charged neurotic situation” in which the originator of the joke has been forced to live; and furthermore, that the function of humor in general is to reconcile man to painful, unacceptable, and tragic aspects of the human condition. “Sexual humor is a sort of whistling in the dark, like Beaumarchais’ Figaro ‘who laughs so much he may not cry.’ ” Later in his Introduction Legman tells us that his “book has been written almost as often in tears as in laughter.

One type of humor exemplifying this principle is the masochistic joke, in which the butt or victim is the joker himself. According to Legman, many Jewish jokes are of this kind, and he makes the interesting point that the material on which Freud based his Wit and Its Relation to the Unconscious is overloaded with jokes of this kind. Another type of humor which can only be forced into Legman’s sexual aggression theory by intellectual sleight of hand is the joke in which the listener is himself made the victim, either by leading him to anticipate a point or denouement when in fact there isn’t one or by tantalizing him with the expectation of learning about some unfamiliar erotic technique when in fact no such revelation occurs. Shaggy dog and sleeve job jokes are examples of this genre.

Yet another exception to Legman’s central theory is the joke which resembles a proverb in expressing some important truth: “Any man that can’t find what he’s looking for in a thousand women is really looking for a boy” contains in it an insight which it takes several pages of theorizing about the Don Juan complex to spell out in detail. The relationship between dirty jokes and folklore is emphasized throughout this book and constitutes one of its most interesting features. Really new dirty jokes are, apparently, a rarity; most dirty jokes can be traced back to the sixteenth century and often earlier. It seems too that no clear line can be drawn between them and folk stories and legends. And both seem to be, if Legman is to be believed, expressions of a pro-erotic concrete-thinking folk-culture which has continued to survive despite the repressive forces of puritanical and academic middle-class education. Mr. Legman is clearly in favor of folk-culture and antagonistic toward middle-class culture and morality. “Monogamic marriage, as practiced in the West” is, he says, “the principal focus of male sexual anxiety.”

There remains one last class of jokes which cannot be explained by reference to hostility and to explain which Legman adopts an uncharacteristic mode of interpretation. These are jokes about sexual organs which are either too large or too small in relation to their opposite number and which render coupling impossible. Legman interprets these symbolically and states that they express fears about temperamental incompatibility.

The fact that dirty jokes are of differing kinds and that they fulfill various functions is an insight which the reader has to work hard to extract. This is partly because Legman is a discursive writer and a muddled thinker who contradicts himself frequently, and partly because he classifies his jokes according to subject matter, grouping together all jokes on a similar theme. This would be in order if jokes really always were about what they seem to be about and if they always had only one theme; but since many seem to have several meanings and since others have a proverbial or dreamlike quality, this arrangement is as confusing as a book on proverbs would be if it insisted on discussing sayings about too many cooks spoiling the broth and people having their cake and eating it as though they were about cooking. Nor does it deal with an important aspect of jokes, which is the fact that they do not exist autonomously, but are stories told by particular people in particular situations and derive their meaning as much from their context as from their content. In fairness to Mr. Legman, it must be said that he is in fact aware of this point; he not only mentions that an individual’s favorite jokes are revealing of his character but also considers the possibility that a person may tell a dirty joke in the hope that his audience will realize that he has some problem for which he needs help.

So far I have taken Mr. Legman and his book seriously, but in fact it is extremely difficult to do so. This is not because it is funny, which it only rarely is, or because it, as opposed to its subject matter, is itself obscene or pornographic, but because it suffers from two other defects which to my mind put it out of court as a serious study.

First, Mr. Legman’s hates and prejudices are so multifarious and are expressed in such intemperate language that they make the reader lose all faith in his judgment. Time and time again Legman turns aside from his stated theme to take swipes at somebody or something he dislikes or to ride off on some totally irrelevant hobby horse. He also takes a delight in impugning the sexual normality of literary figures who are so recently dead that the allegations, even if true, can only cause offense. Among his hates are D. H. Lawrence (“a physical weakling dreaming of rape”), Ernest Hemingway, Graham Greene, Marshall McLuhan, Arthur Machen (“a half-baked exotic”), digit-dialing, zip codes, hippies, science fiction, women who swear, smoke, drink, or shave their armpits, doctors, psychiatrists, and most (but not all) writers of sex manuals. Even Freud is not spared a snide crack or two, notwithstanding Legman’s total but non-comprehending intellectual dependence on him.

Among his hobby horses are Shakespeare’s homosexuality, Rouget de Lisle’s plagiarism of a theme from Mozart’s 25th Piano Concerto, and the unconscious motives of surgeons; in his view hysterectomies and mastectomies are performed by men who enjoy castrating women and “never have and never will save any women from dying of cancer,” while “psychosurgery and sterilization of the insane are available for physicians more interested in men.” Although it is clear that Legman sees himself as a gallant defender of womanhood in a world increasingly rejecting it in favor of perversion and narcissism, and although, too, one can sometimes sympathize with his hostility toward artifice and humbug, his indiscriminate and incontinent aggressiveness is ultimately repellent.

Nor are his broadsides of invective always accurately sighted. He asserts that the British Act of Parliament of 1967, which legalized homosexual acts between consenting male adults, was passed “to protect aristocratic privilege even in perversion” and goes on, “Note also that the relaxation of British law is not extended to consenting female adults. Lesbian aristocrats, unite!” In fact such an extension was not necessary, since British law takes no cognizance of female homosexuality, largely, it is said, because a nineteenth-century Home Secretary chose to omit it from the Offences against the Person Act rather than have to explain it to Queen Victoria.

Secondly, Mr. Legman’s knowledge of psychoanalysis is inadequate to the task he has set himself. He is a primitive Freudian, familiar with analytical concepts of pre- 1920 vintage but totally ignorant of the developments of the last fifty years. He knows about castration-anxiety and infantile sexuality but not about signal-anxiety and ego defenses, and as a result his interpretations are old-fashioned and unsophisticated. He can demonstrate convincingly that jokes about virginity and defloration express men’s fear of being castrated by women but he does not realize that it might be possible to analyze how different types of jokes on this theme succeed in mastering or denying this anxiety. He has also, to my mind, missed an opportunity by failing to liken dirty jokes to dreams. Although dirty jokes differ from dreams in being verbal creations, they use words not to communicate ideas but to conjure up vivid visual imagery, and it would have been possible, I suspect, to conceive of them as condensed, over-determined phenomena with a manifest content—the joke as told—and a latent content consisting of a cluster of concealed, additional meanings, some of which might well not be sexual at all. On this view, the wit, when present, of a dirty joke would depend on the economy with which it succeeded in fusing a number of themes into a single story. 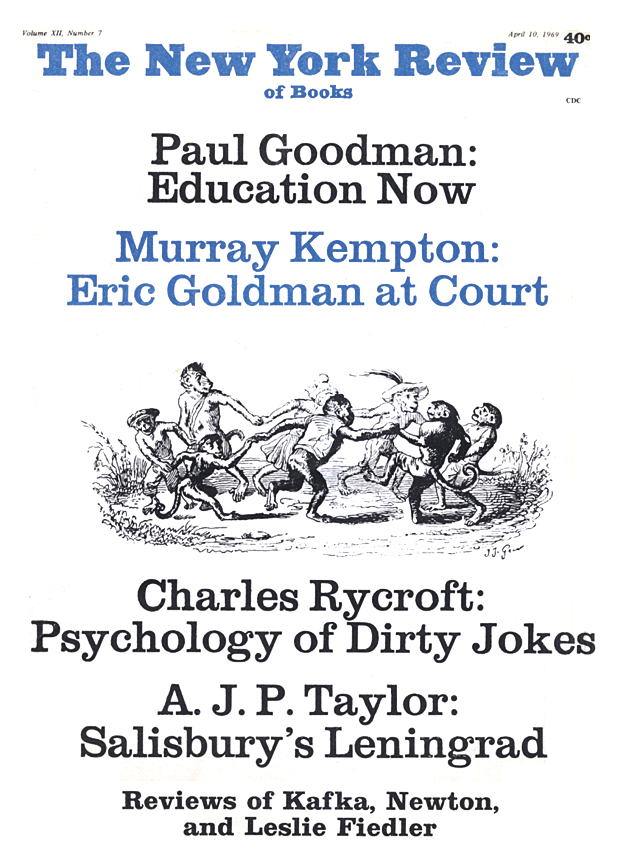 Charles Rycroft (1914–1998) was a British psychoanalyst and writer. His books include A Critical Dictionary of Psychoanalysis, Anxiety and Neurosis, The Innocence of Dreams, and Psychoanalysis and Beyond.