Sensei and His People

Isn’t the market for Japanese fiction just about swamped? Or maybe, since I have passed straight from reviewing Mishima’s Forbidden Colors to reviewing Mishima’s Thirst for Love, it is simply my personal market whose thirst has been quenched—temporarily at least. Moving from the first novel’s urban scene of “gay” bars to the Japanese version of Cold Comfort Farm in the second, one notes that something remains common: the largely arbitrary nature of what is felt and thought and done and suffered, as if Mishima’s motto were “Only disconnect.”

In an article in Life back in 1966, John Nathan said that “reading a Mishima novel can be like going to an exhibition of the world’s most lavish and ornate picture frames.” The term which occurred to me in reading Forbidden Colors was “wax museum,” a gallery of non-characters about whom we come to know everything except the mainspring of their being. Where that should be, there is a large empty space, a deafening silence. Forbidden Colors is an icy museum, containing an aging writer who sounds as if he had been invented by a German-educated Oscar Wilde, a beautiful youth whom the writer uses as bait in avenging himself on sundry women who have humiliated him in the past (i.e., by getting them to fall for an irresistible homosexual), an ex-Count who has “been intimate with about a thousand boys,” and his ex-Countess who has “the reputation of becoming sexually intimate with any man within a week’s time.” These main exhibits are supported by a cast of what seems hundreds of more or less faceless natives of the less-than-gay demi-world of homosexuality. The story winds its slow repetitive way toward what looks faintly like a happy ending, as the beautiful youth watches the birth of his child and realizes that the vagina suffers also…. He inherits a good deal of cash from the writer, and this helps too.

Thirst for Love, which was published in 1950, a year earlier than Forbidden Colors, is a much smaller and more modest gallery of picture frames, neither lavish nor especially ornate, and it is largely free of the icy aestheticism and intolerable philosophizing of the later novel, mercifully sparing in mysterious “deductions” drawn from thin air or from something the novelist has failed to tell us. As Donald Keene remarks, the story is “economically structured,” which is the last thing one would say of Forbidden Colors, and you can see where it is leading to—though not, unless perhaps you are an old student of modern Japanese fiction, why it is leading there. Etsuko is a youngish widow who is (in both senses) living with her oldish father-in-law, in a countryish small town near Osaka. It is said of her that “not thinking about things was the basis of Etsuko’s contentment. It was her reason for being. This is slightly strange, since (though not a notable example of it) Etsuko is no exception to the rule that Mishima’s characters possess an incredible capacity for subtle self-interrogation and speculation. Thus Etsuko:

I wish that some morning, while my eyes are closed, the whole world would change. It’s about time it came—that morning, pure morning. It would belong to no one, in answer to nobody’s prayer, that morning. I dream of a moment when, without my asking, my actions will betray completely this part of me that asks for nothing. Tiny, imperceptible actions…

Etsuko falls in love with the hired hand, young Saburo, who is a peculiarly stout, healthy, unintrospective, ox-like non-character, and in his negative way something of a relief after the long retrospective account of Etsuko’s husband and his disease and painful death. But he brings no relief to Etsuko, for he simply doesn’t know what the word “love” means. Finally she kills him, out of exasperation or on the principle expounded by Wilde that “each man kills the thing he loves”: the brave man with a sword, Etsuko with a mattock.

Is this general absence of motivation as we understand it a Japanese thing? Is Mishima merely being representatively enigmatic, inscrutable? I shouldn’t think so. To me his cases seem very special ones, more special than with Flaubert, say, and his “ils sont dans le vrai,” or with Thomas Mann, whose interest in disease he shares, but on a much lower level of relevance: in Thirst for Love it is asked, “Is sickness perhaps, after all, only an acceleration of life?” Mishima’s cases, I would venture, are special for the sake of being special. This helps to account for the sense of remoteness, the resistance to participation, experienced by even the readiest reader in Mishima’s work, at any rate outside some of the Five Modern No Plays and the stories published in English in 1967 under the title Death in Midsummer.

In Sensei and His People, which is not a novel but an account of something that happened, most of the time you do understand why people do what they do. There is no mystery, real or factitious, here. The action starts in 1937 when Ozaki, a missionary of the Tenri sect, sets about smashing altars on the grounds that they are merely a device for extorting cash from the faithful. He and his few followers, four families in all, are consequently ostracized by the village and forced to go it alone. The story is told by the master’s right-hand woman, a person whose natural courage and faithfulness were reinforced by the wholehearted love, both sacred and profane, which she had for Ozaki—than whom, incidentally, she is distinctly less idealistic. Compelled to stick together, the four families find that communal labor leads to communal living, and Mrs. Sugihara recounts the initial difficulties: for instance, remembering not to give one’s own children the tastiest snacks when preparing food. This difficulty they contrive to get round by swapping children for the night, and in a similar spirit they sell their four individually owned oxen and buy new communal ones with the proceeds. Rice, not surprisingly, is one of the last things to come under communal control.

The people of Shinkyo, as they call the commune, go through hard times, their children are humiliated at school, villagers and police suspect them of getting funds from Russia—they must be Communists! (In fact, at the end of the war, they were wooed by the Party.) But they work hard, even by peasant standards, and the hostility and distrust from without serve to strengthen the communal will to survive. To survive and even, eventually, to prosper in a modest way. In 1957 the tables are turned, Ozaki Sensei becomes District Chief and the enemy ringleaders are themselves ostracized. A few years more and the people of Shinkyo, numbering eighty souls, are operating the largest tatami-making factory in Japan.

Mrs. Sugihara’s account is ushered in and out by David W. Plath, a more than usually enterprising anthropologist or (he says) ethnographer. He makes what I think is the central comment from the professional point of view: Shinkyo is both different and typical, “simultaneously a manifestation of and a reaction against Japanese rural tradition.” In their actions and reactions the members of the commune seem as Japanese as the Luddites were English—though Shinkyo is all for machinery, being far more practical and pragmatic in its impetus (must needs when society drives you out) than ideological. Their religious reforms, as Mrs. Sugihara says, were “mild,” they had neither leisure nor ambition to develop any “ism,” and in fact their contributions to the war effort were rather larger than those made by the villagers, thus gaining considerable face for Shinkyo. We must hope that Shinkyo won’t collapse beneath the hordes of note-books and cameras which have since descended upon it.

Mr. Plath remarks that Japanese novels, “valuable as they are” to an understanding of Japanese life, “tend to portray the middle and upper class urban ways the novelists know best.” Edwin O. Reischauer states that Sensei and His People “has a ring of authenticity no novelist’s pen could bring to it,” and Kenneth Rexroth talks of it as above all “a superlative example of the new form ‘true novel.’ ” It is certainly an interesting record, but not exactly soul-absorbing, and that the book should have been hailed with such advance enthusiasm I would interpret as a sign of the thinness in humanity of the modern Japanese novel as available in English.

Finally, a third slice of Japanese life: the aesthetic and meditative, in which action is considered rather vulgar and to be avoided or at worst reported casually. Earl Miner has brought together four of the best-known examples of the Japanese literary form, nikki, which he renders as “poetic diary.” The Tosa Diary, possibly the earliest extant work of prose fiction in Japanese, dating around 935; The Diary of Izumi Shikibu, a slow, shadowy and poem-larded relation of courtly love, a subject dealt with more engagingly in The Tale of Genji by Murasaki Shikibu and more wittily in The Pillow Book of Sei Shonagon, two other Heian ladies contemporary with Izumi Shikibu; The Narrow Road through the Provinces, a travel journal by the late seventeenth-century poet Basho, whose poems are discernibly superior even in translation to those of the other poetic diarists here; and a brief work, The Verse Record of My Peonies, consisting largely of poems inspired by a pot of flowers given to Masaoka Shiki during an illness in 1899:

In three days’ time
The peony blossoms are ended: My record in verse.

The book is handsomely produced and illustrated, and Mr. Miner has provided a full, possibly a rather top-heavy, critical apparatus. Indeed, the footnotes are often more arresting than the text, and the accessories more attractive than the diaries. 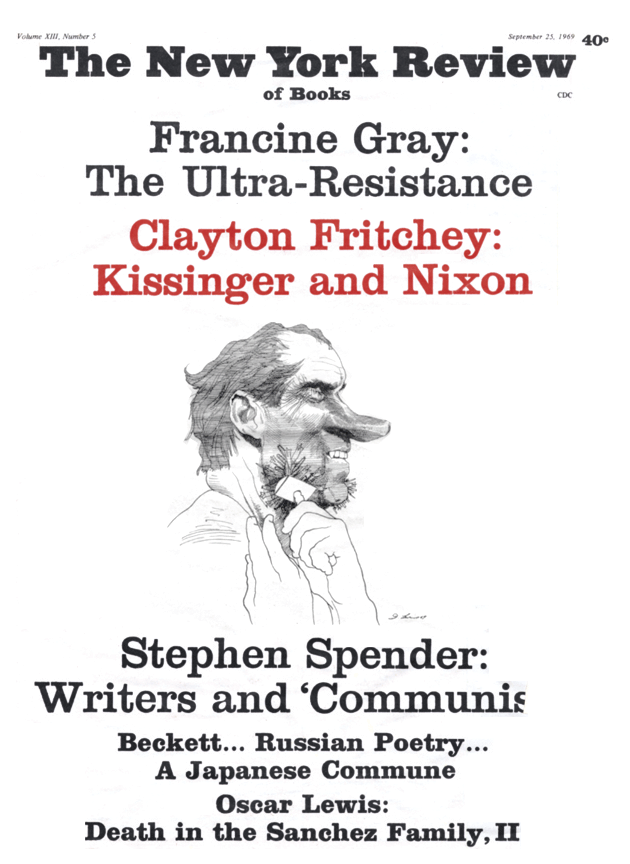