The Fall into Time

by E.M. Cioran, translated by Richard Howard, with an Introduction by Charles Newman
Quadrangle, 224 pp., $5.95

The Fall into Time can and, I think, should be read simultaneously in at least two ways, perhaps more. It can be read seriously as a sermon by a latter-day Jeremiah (it is not an accident, surely, that M. Cioran is the son of a Greek Orthodox priest) about The Fall of Man, a passionate denunciation of the mess he has made of his life, a condition which, the preacher says, is better accounted for by theology than by biology.

In listening to such a sermon, one naturally expects some exaggeration; if we are to be roused from our sloth and flattering illusions, the picture must be painted as black as possible. Man, says this preacher, is “an episode, a digression, a heresy, a kill-joy, a wastrel, a miscreant who has complicated everything.” Consciousness is an evil, “the quintessence of decrepitude.” Knowledge is an evil: “The more we yield to the desire to know, stamped as it is with perversity and corruption, the more incapable we become of remaining inside some reality, any reality.” Language is an evil: “[Man] will never approach life’s inviolate sources if he still has dealings with words.”

The preacher, however, is in the anomalous position, of which M. Cioran, I’m sure, is well aware, of being unable to practice what he preaches. To denounce consciousness, he must appeal to the conscious minds of his audience; to denounce knowledge is to claim that he knows it is evil; to denounce language he has to use words. Chesterton wrote: “If it is not true that a divine being fell, then one can only say that one of the animals went entirely off its head.” To understand Man, that is, individual men must share his madness. So M. Cioran says of one of his forerunners, Nietzsche: “We owe the diagnosis of our disease to a lunatic, more contaminated and scarred than any of us, to an avowed maniac, precursor and model of our own delirium.”

M. Cioran, himself, however, is certainly sane by ordinary standards. Only now and again does he say something which, to me, seems crazy. I do not believe that he is a Manichaean, but occasionally he makes remarks which make him sound like one, as when he suggests that God fell when He created the Universe, or when he declares: “No one recovers from the disease of being born, a deadly wound if ever there was one.” Then he says that, while everybody’s secret wish is to be praised, which is true, we are all ashamed to admit it, which is, surely, false, though, of course, we want to be praised for the right reasons. Then, coming from a writer, I find this observation very odd.

What writer enjoying a certain fame does not ultimately suffer from it, enduring the discomfort of becoming known and understood, of having a public, however limited it may be? Envious of his friends who loll in the comforts of obscurity, he will do his best to pull them out of it…. Write! Publish! he keeps urging furiously.

A writer may suffer from the feeling that he is admired or disparaged for the wrong reasons, but every writer hopes to be read. If M. Cioran really suffered as he says, then, either he would not publish at all, or publish anonymously. Then, judging by myself and the writers I know, our secret and shameful wish is that we could be the only writer alive: the last thing we want to do is encourage competitors.

For the most part, however, M. Cioran carries me along with him. On the mental triad, Faith or Belief, Doubt, and Denial, he has fascinating things to say. Without beliefs of some kind, we cannot really live, far less act.

Anyone who cherishes the equil ibrium of his mind will avoid attacking certain essential superstitions. This is a vital necessity for thinking, despised only by the skeptic who, having nothing to preserve, respects neither the secrets nor the tabus indispensable to the duration of certitudes….

Skepticism has against it our reflexes, our appetites, our instincts. For all its declarations that being is a prejudice, this prejudice, older than ourselves, outdates man and life, resists our attacks, withstands reasoning and proof, since it is also true that whatever exists and manifests itself in duration is based on the undemonstrable and the unverifiable.

The capacity to affirm or believe proceeds, says M. Cioran, from “a depth of barbarism which the majority, which virtually the totality of men have the good fortune to preserve….”

The term “barbarism” obviously has shock value, but I suspect there may be another reason why he uses it. He writes in French, and the French language has no equivalent to the English term “common sense.” (“Bon sense” is not the same thing.)

M. Cioran distinguishes between two kinds of skeptic, the “pure” skeptic or Negator, and the Doubter. The negator is not really seeking for truth, his goal is endless interrogation and he rarely calls the act of negation in question. The doubter, on the other hand, frequently calls doubt into question.

The drama of the doubter is greater than that of the negator, because to live without a goal is more difficult than to live for a bad cause.

Only the “barbarian” in us is capable of creative thought.

As long as we follow the mind’s spontaneous movement, as long as, by reflection, we put ourselves on the level of life itself, we cannot think we are thinking: once we do so, our ideas oppose each other, neutralize each other within an empty consciousness…. To produce, to “create,” is to have the courage or the luck not to perceive the lie of diversity, the deceptive character of the multiple…. Illusion alone is fertile, illusion alone originates…. All that shimmers on the surface of the world, all that we call interesting, is the fruit of inebriation and ignorance.

I must confess I don’t see why diversity should necessarily be a lie, but I think I get the basic idea.

But to regard M. Cioran solemnly as a preacher is not the only way of reading him. He can also be read playfully as a master of language who is having enormous fun handling words. In his most intelligent Introduction, Mr. Charles Newman speaks of the temptation to grasp M. Cioran by the aphorism, “to make him into a kind of Gallic Oscar Wilde.” Provided one realizes that he is not simply that, I think it is a perfectly legitimate way of reading him.

He has said that all his books are autobiographical, but no writer could be less “confessional.” He tells us that a man in good health is always disappointing, but I suspect his own health is good. I hope so, for his sake, since, if it is not, then by his own judgment he is a sadist. He says that, if only there were more boasters and flatterers around, the psychiatrist would be out of a job, but I’m pretty sure he indulges in neither activity. He declares that we should be better off if we were verminous like the animals and smelled of the stable, but I should be surprised to hear that he never takes a bath. He condemns lucidity:

Consciousness is not lucidity. Lucidity, man’s monopoly, represents the severance of consciousness: it is necessarily consciousness of consciousness, and, if we are to distinguish ourselves from the animals, it is lucidity alone which must receive the credit or the blame.

Yet the first thing one notices about these two sentences, or any others by M. Cioran, is how “lucid” they are. Never, in reading him, does one encounter, as one often does when reading Hegel or Heidegger, sentences which make one exclaim: “What the heck does this mean?” For me, the two most interesting authors writing in French who have emerged since the last war are M. Cioran and M. Malcolm de Chazal, both of them aphorists, a literary device which always gives me joy. When, for instance, I read

Resign from the race? That would be to forget that one is never so much a man as when one regrets being so

they make me feel anything but gloomy. I say: “Goody! Goody!”

In conclusion, let me say that Mr. Richard Howard’s translation is magnificent. 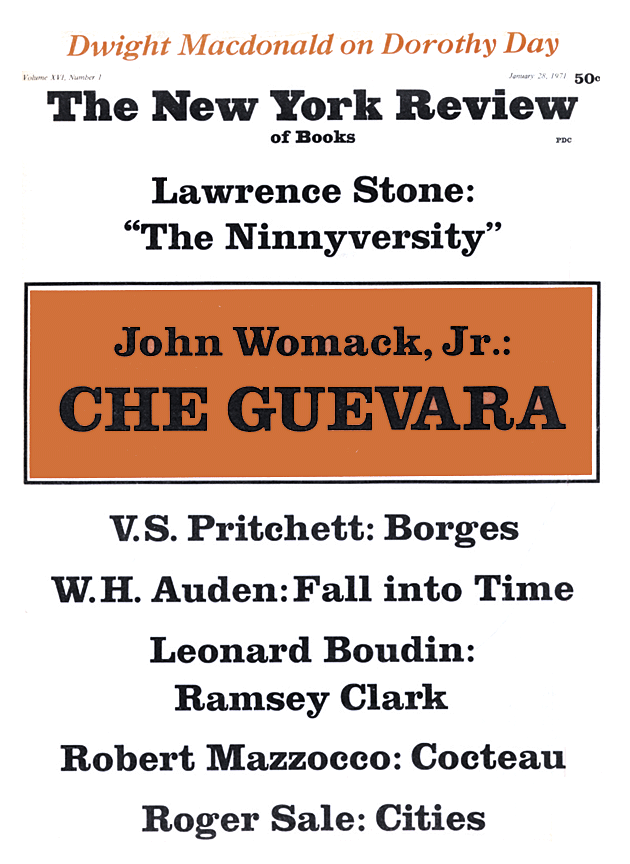 ‘We get the Dialectic fairly well’

‘We get the Dialectic fairly well’

W.H. Auden (1907–1973) was an English poet, playwright, and essayist. His poem in this issue will appear in Poems, 1940–1973, the second of the two final volumes in the Princeton University Press edition of The Complete Works of W.H. Auden.