How can one describe Heinrich Böll’s new novel, further than its (as far as it goes) apt title does? To begin with, one might suggest that it seems more like a new novel by Günter Grass. Or even a new novel—and, if corporeality is to be expected of this literary form, more of a novel than his earlier ones—by Uwe Johnson. Perhaps, in a period of consolidation, these novelists are merging one into another, eventually to form the definitive German Novelist? In which case the German Novelist will be less grotesque than Grass, less disembodied than Johnson, and less staid than Böll. This might be an excellent recipe.

The book, translated by Leila Vennewitz with a splendid air of authenticity, is a portrait, as the title indicates, of a lady, Leni Pfeiffer, at the time of composition forty-eight years old, surrounded by a cloud of witnesses, or “informants.” The form the novel takes is that of a closely researched report, in which the author, tongue in cheek, uses the most extreme procedures of bureaucratic memoranda. He states early on that “important informants will be introduced with exact data as to height and weight.” At moments the reader is bound to wonder how the author can keep his tongue in his cheek so long without choking to death. To some extent the sense of artificiality is alleviated by the fact that the author, or “the Au.” (as the book has it, in or out of parentheses), comes to take an active if minor part in the action and even falls in love with Sister Klementina, a rather fetching nun who throws off her habit with small reluctance. (There may be here a manifestation of Böll’s equivocal feelings about Catholicism as evinced earlier in The Clown.)

Even so, some embarrassment remains. The Au.’s poker-faced verbatim reproductions of the reports of his informants are supplemented by a psychologist’s “psychogram” replete with technical terms and their abbreviations, in which quotation marks surround lay expressions which somehow still have to be employed, and a police officer’s deposition is included as part of the evidence. This mode of telling a story inevitably has this effect: where the author assumes the role of a detective, the reader is forced to become a voyeur. “Although obscenities will be avoided wherever possible in this report, for the sake of completeness it may be in order to describe the sexual enlightenment offered to the girls before they left boarding school….” Moreover, these informants and report writers have something of the loquacity and taste for detail of Richardson’s Pamela.

One sees the advantage of this procedure—for one thing it preserves Böll from that faint (though I never thought especially distasteful) sentimentality to which he has inclined in his handling of put-upon characters whom he admires or pities, for another it is itself a comment on our brave new world of insolently brisk computers and identikit psychologizing. But it exacts a stiff price from the reader when pursued through a book of this size.

One difficulty is to establish, whatever the occasion, whether or not Böll is being gratuitously bureaucratic, wantonly tongue-in-cheek, supererogatorily documentary. Do we need the specimens of Alois Pfeiffer’s patriotic prose (“Such a one was Colonel Günther!”), c. 1940? Well, perhaps we do, if not at such length, since Leni, we learn, did marry Alois, though in error and very briefly, and she should be cleared of the suspicion of callousness toward him. A lot of what the Au. declares he is or is not “able to confirm” doesn’t matter one way or the other, so his scrupulousness could well be spared—that is fairly clear. Nonsmoking, perhaps through association with Hitler, seems to carry some significance as a pointer to character (the Au. himself is a heavy smoker), but do we need to know, among minor characters, who smokes a pipe, who smokes cigars, who smokes cigarettes? This particular information is imparted while the Au. is discussing the case of Leni in the conference room of Hoyser, Inc., on the twelfth floor of a high-rise building overlooking the Rhine, with the two young Hoysers who are about to evict “Aunt Leni” from her flat, which they own. They justify this, in spite of past obligations to the lady, on the grounds of her “unrealistic attitude,” failure to grasp the profit motive and generally “sloppy ways.” There follows a highly amusing account of Leni unconsciously undermining the principles of “our achievement-oriented society, of the free democratic constitutional state”:

Side by side with this economic antiprocess—and this is central to the issue—there is a moral antiprocess. It so happens that conditions like those in Aunt Leni’s apartment foster communal, not to say communistic, illusions which, not as illusions but as idylls, are disastrous, and they also foster, well, not exactly promiscuity—but promiscuitivism, which slowly but surely destroys modesty and morality and makes a mockery of individualism….

The appeal of these impassioned clichés is heightened by the condition of the conference room, its air thick with various kinds of tobacco smoke. When the Au. tries to open a window, young Hoyser points out with gentle didacticism that the air-conditioning of the building is an extremely complex affair, permitting “spontaneous individual airing” only at the lighting up of a magic eye which is not due for another hour and a half. It is all a matter of progress—and “we can’t do whatever we like, either—we are not permitted to open the windows in our own building whenever we like.”

A case of Poor Little Rich Industrialist, of course. But we also perceive that, though the phraseology has changed and we now hear about “achievement-oriented society” and “moral antiprocess” instead of Blood-and-Soil and degeneracy, what is going on underneath is in essence much the same. We gather that the sort of disposition which enabled its possessors to thrive under Nazism not only enabled them also to ride the defeat of Nazism but enables them now to prosper. Equally, those who never did well, but managed to survive with something like honor, are still not doing well but still surviving with something like honor. Leni is an embarrassment because she has always been her own woman: that is, to those who follow an ideology, whether through conviction or through opportunism, she will always seem an “anarchist.”

“What kind of a world is this?” asks the Au. in the midst of a discourse on values. Why and wherefore do some women receive two villas, six cars, and a million and a half in cash for providing the same service that has earned other women a cup of coffee and a cigarette costing 22.5 pfennings in all? “What has happened to justice?”

The saddest instance of what certainly looks like the absence of justice is the case of Leni’s best friend, Margret Schlömer, who lies in the hospital suffering from advanced venereal disease, a fearful mess, “tears might come out of her nipples and urine out of her nose.” Margret was not a prostitute, but rather “a woman forever entangled in certain masculine desires,” and she caught the infection from a foreign statesman whom she was officially instructed to get (as she did) into a “treaty mood,” thus benefiting the whole of the “achievement-oriented society.” Margret dies in a venereal ward, not of the disease, which was practically cured, but of blushing. She was “an extremely modest woman,” and her story, though in certain ways the reverse of Leni’s, underlines the same moral: a love-life cannot be measured by bed-count. Another moral here is that you can cure VD, but there is no cure for sensitiveness and a loving nature. Nor, entirely, for innate integrity of soul.

Yet this is by no means a bitter novel: rather the contrary. Grass’s Dog Years asked the question, “Who wants to tear open old wounds if the opening of wounds gives pleasure?” The opening of wounds certainly gave rich literary material. While the war is central to Group Portrait with Lady, the novel deals with Germany both before and after it. Most of Böll’s “Group” are survivors, some of them persons of integrity, others not notably so; none of them is a monster. The “Group” is a varied one (the reader would welcome an index to eke out the List of Characters), and the way in which each informant becomes in turn the subject of other informants relieves Leni from excessive scrutiny and saves the reader’s sense of voyeurism from growing to unbearable proportions.

One likes what one sees of Leni, and Böll manages so that the more one sees the more one likes her. The happy—or at least not unhappy—ending is wholly acceptable: “A garbage collector who rolls, lifts, empties garbage cans, bound in love to a woman who mourns three husbands, has read Kafka, knows Hölderlin by heart, is a singer, pianist, painter, mistress, a past and future mother….” To complete this part of the picture, it should be mentioned that the happy man is an immigrant Turk “who already has a wife and four children at home and on account of polygamous rights, of which he is aware but of which he has so far never been able to make use, has shown not the remotest trace of a guilty conscience….”

The story in this novel of the Jewish nun, Sister Rahel (called “Haruspica” from her ability to read the future from the bowel movements of her charges), and the roses that bloomed out of her ashes every December, could come from the pages of Günter Grass, as could the fictitious wartime firm which Leni’s father created to acquire cement for disposal on the black market and whose payroll featured foreign workers with such names as Raskolnikov, Pushkin, Oblomov, Gogol, and Lermontov. Also reminiscent of Grass, one would have said, are the sewn-on foreskin (which survived up to a point) of Leni’s Russian lover Boris, Leni’s nightly encounters with the Virgin Mary on the television screen (cf. Local Anaesthetic), and the connection implied between three or four handfuls of gold teeth and real estate (cf. Dog Years). Also the exercises in impassive expertise and the mildly self-indulgent “documentation” devoted to the techniques of wreath-making and the chemical composition of human tears.

Not that these likenesses matter—and it could be argued that if in this novel Böll has moved in Grass’s direction, then in Local Anaesthetic Grass had already moved in Böll’s direction, moderating his old flamboyance in favor of a new sobriety. What does matter is that the result is intelligent, inventive, humorous, touching, everywhere humane, and at almost every point eschewing the easy opportunities. In spite of its etiolated style, mixing the bureaucratic with the scientific, Group Portrait with Lady gives off the mixed smells of humanity undegenerate, unregenerate, and, for better or for worse, unremitting. 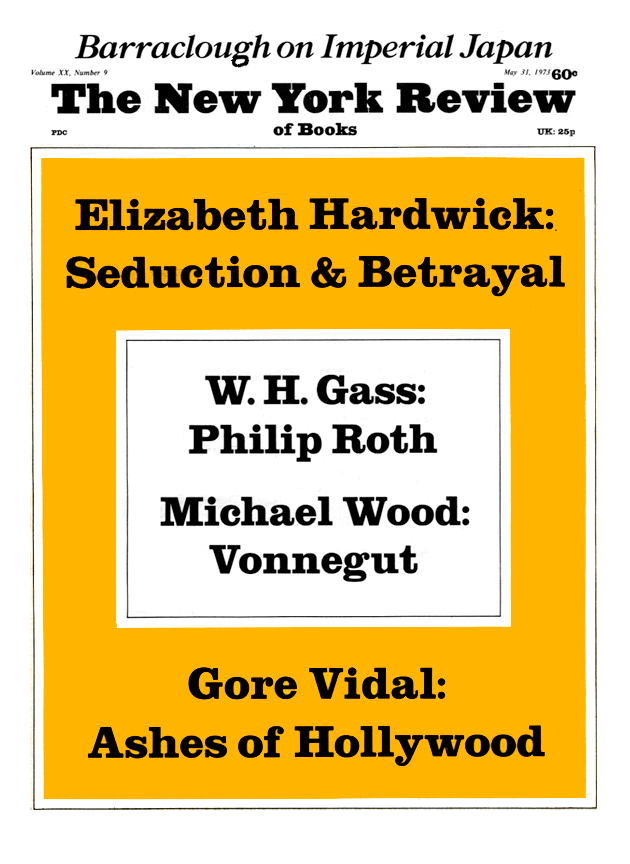