With no wish to discourage your interest in Canada, but with a respect for the validity of Canadian literature, criticism, and art, I would like to respond to Edgar Z. Friedenberg’s review of Forum: Canadian Life and Letters, 1920-1970 [NYR, May 17]. I believe the basic fault in the review is both yours and his. To imagine that Mr. Friedenberg would know about Canadian matters because he is an intelligent man who now lives in Canada is as valid as assuming that an intelligent English academic, after a few years in America, would understand this country. Without considerable background and knowledge, such an Englishman might say some interesting things, but he would make some unsound generalizations. Mr. Friedenberg admits in his review that prior to three years ago, when he moved to Canada, he knew nothing of Canadian politics and culture. Your selection of Mr. Friedenberg as a reviewer of an important Canadian document seems to assume that there is nothing professional to consider in evaluating a Canadian book, nothing demanding a background or a special knowledge, and any intelligent American, with a little knowledge of Canada, can do the job. He simply cannot.

I do not mean to indicate that the review is all incorrect. Let me repeat that I respect Mr. Friedenberg as an intelligent man. No review of his would ever be uninteresting. But his limited knowledge of Canada is so serious as to create a deeply distorted perspective. Let me briefly indicate what I mean. To so easily discredit Canadian literature, criticism, and art, as he does, is unacceptable. One has only to consider certain names: Morley Callaghan, Hugh MacLennan, Northrop Frye, Marshall McLuhan, and a group of modern painters most easily examined in a publication of the Canada Council, The Canada Council Collection. I am only mentioning the most obvious here, in a brief list, and do not suggest the richness of Canadian literature, criticism, and art. Also, to suggest that Canadians could not accept or understand Flannery O’Connor because of their failure to perceive evil is absurd. Canada produced Marie-Claire Blais who is equally preoccupied with evil, if that is the standard, and also concerned with it from a Roman Catholic background. She is one of the most admired French-Canadian novelists, one of many who write well and have no fear of reality.

There is an extraordinary cultural life in Canada today, especially in Quebec and Ontario, and Mr. Friedenberg simply has not read enough, nor has he seen enough of Canada—at least he has not gotten out of his small environment in Nova Scotia. It would, I believe, be impossible for him to be so general, so sweeping, so ill-informed if he had any background and knowledge, even any significant first-hand experience.

If the error is yours in choosing Mr. Friedenberg, it is, however, understandable. Few Americans, even intelligent ones, ever bother to know about Canada. However, Mr. Friedenberg should, if he has any knowledge of Canadian matters, be able to direct you to informed critics, either in Canada or the United States. Mr. Friedenberg’s error is also understandable, but equally serious. He sees Canadian nationalism and provincialism as so pervasive that in matters of culture he finds Canadians often misjudge what is local for what is good. That fact is, certainly, true, but it does not lead to his conclusions: that in Canada, there is an absence of artistic quality and a lack of awareness of human evil. The above names suggest this quality. The many events of this century, and especially the recent October, 1970, Quebec kidnappings and murders, have, even for Canadians, broken the myth of their peaceable kingdom. At least, these events and others have done this for sensitive Canadians. Certainly anyone who reads Canadian novels or poetry, or attends Canadian theaters, knows that this myth is no more present in Canada than anywhere else.

There is no value in discussing Canada unless you are willing to achieve something more than the badly informed indifference that has for years characterized our attitude towards Canada. A lack of information is always worse than indifference, for with some knowledge it is impossible to be fully indifferent. Even Edmund Wilson’s O Canada, now somewhat out of date, and never more than a superb survey, would have saved you and Mr. Friedenberg from what is a serious failure in judgment and an intellectual mistake.

I think there is a real question about the major assumption underlying Mr. Kraft’s thoughtful critique of my review of Forum; it was best stated by the heroic Father Huddleson just before his deportation from South Africa. He noted that he had constantly been accused of intervention in the internal affairs of a country to which he was a comparative newcomer and which he could not possibly expect to understand. And he replied that this accusation might equally well be directed toward a person who, on entering a room in which people had been enclosed for a very long time, complained that it had grown very stuffy, though they might well have got so used to it that they liked it that way. There are, in short, compensating advantages that the native, albeit better informed, does not enjoy. To extend Mr. Kraft’s analogy about the intelligent Englishman a bit more particularly, I know of no single work—except Tocqueville’s—that has helped me to understand my own country more than Sir Dennis Brogan’s The American Character. I find him far superior to the willful American apologist. Mr. Alistair Cooke, who seems almost be-knighted.

With the exception of Marie-Claire Blais, whom I know only through Edmund Wilson’s book, the authors Mr. Kraft cites have long been a source of enlightenment and pleasure to me, for years before I moved to Canada. But that points up the problem very well. It detracts nothing from the worth of Mr. Callaghan and Mr. MacLennan to say that they are both men of their period. Meanwhile, the tides have receded from Sylvia Beach. No one would cite the work of Hemingway or Cozzens as exemplary of what is most significant in American prose fiction today. Moreover, I fear this is indeed a matter of sensitivity to contemporary moral and political currents rather than of technique or fashion. The writer I respect most today is conservative, old-fashioned to the point of being ponderous, and scornful of the need for technical innovation—and an exile from her colonial homeland. If there is anything Doris Lessing does not comprehend about the nature of good and evil in modern life, and its relation to politics, however—well, I don’t want to know what it might be. I couldn’t bear to learn.

There may be a Canadian who could write with as much insight; but he could not gain a hearing in his own country. Canada is still too legitimist, too hung up on authority. You can write about it satirically, and many do, but not with the weary, testy awareness that it will be the death of us all unless cast down which is the heart of the modern experience. Canadians still have faith in the possibilities of their government; and this, I take to be the measure of their actual subjugation first to England, and then to the United States. It is only possible to retain faith in your government if the actual decisions that determine the course of your life are made elsewhere, so that your own politicians’ responsibilities—and your own as a citizen—are never really faced.

Mr. Kraft’s reference to the “October, 1970, Quebec kidnapings and murder” that “even for Canadians broke the myth of their peaceable kingdom” illustrates precisely what I mean. They really do believe that violence against public officials is worse than against ordinary people; and Mr. Kraft, I judge still does not see that the thing that broke the myth for Americans was not the minimal and exaggerated FLQ violence, but the gleeful invocation of the War Measures Act—that is what we had to apologize for to our fellow citizens south of the border.

I didn’t refer to film in my review, but the art of Costa-Gavras is probably the best example of what I find totally missing in the Canadian realization of life. He isn’t the greatest director in the world by a medium shot; but you can’t live in the 1970s without having learned from somebody what he has to teach. William Lyon Mackenzie knew it, but the awareness has since been lost in anglophone Canada.

This, of course, is a large part of what I mean by a lack of a sense of evil. Incidentally, it was Northrop Frye’s work that put me onto this; as I recall, he explains what he has seen as certain limitations on Canadian fiction by the fact that the adversary was usually seen as isolation or as harsh nature, though I don’t think he referred to evil as such. Even Margaret Atwood—whose talent is certainly large enough to encompass any experience—seems to accept this: her people can be ugly enough, certainly; but in the long run they don’t matter as much as the wilderness without. And I do find the same condition in Canadian painting, which I have made a conscientious if not very successful effort to learn about. I am not in Canada now, and won’t be for nearly two months; and so cannot check back against the anthologies I was working with; but what I recall is that, though the technical quality was excellent, and the trees writhed as expressively as people do in Edvard Munch’s work, they seemed chiefly to be statements about emptiness.

Most of the critical comment I have received has been far less temperate than Mr. Kraft’s letter; and it does raise one issue that, for the record, I would like to deal with. The respondents who seemed most offended by my review objected to what they called its patronizing tone: they became infuriated because I so clearly regarded the review as favorable to Canada while, at the same time, I compared everything in Canada to something corresponding in the United States that I described as usually more impressive, if not superior. Comparisons are indeed usually odious; but I don’t see how else I could have made Canadian events and personalities meaningful to a primarily American readership.

My critics, I think, might have understood this; still, they do have a point and were responding to something quite real in the review that I did not realize myself was there. I left the United States in anger and despair for a country that I believed—and still believe—to be morally superior to it. And as a person brought up on Mark Twain and E. M. Forster, I ought certainly to have realized how little appeal moral superiority develops over a period of time. For three years, now, I have been trying to convince myself that I liked aspects of Canadian life that I did not even admire; and this does show through in a patronizing tone. Well, I think that may be over now. The United States is a great nation, though not a good one. Canada is a good country, and it has been good to me, and I am grateful to it and hope my presence there will continue to be mutually beneficial, though some of its cultural nationalists have ventured to suggest otherwise. But, for better or for worse, civitas Romanum sum (or however it goes—you get a lousy classical education in the States); and not of divided, though unmitigated, Gaul. I’m not sure anybody but an American can afford to live in Canada. In more ways than one. 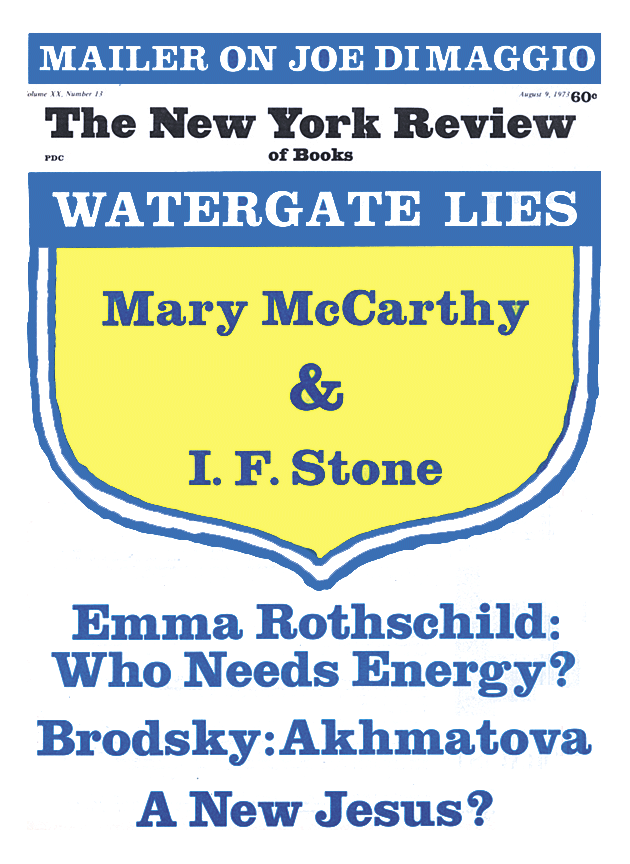