Noam Chomsky has kindly called to my attention, and has circulated to some members of the press, a number of corrections of my review of François Ponchaud’s Cambodge: Année Zéro [NYR, March 31].

First, I attributed to “texts distributed in Phnom Penh” the injunction that not only enemies of the regime but “their off-spring until the last one” should be suppressed. On page seventy-three of his book, Father Ponchaud does not in fact quote this phrase from an official text but says it is a “leitmotif” of the justifications that are made for suppression. He earlier cites a number of slogans similar to the ones I quoted, which are being used to justify the current “purification.” For example, “It is not enough to cut off a weed, it must be pulled up by the roots.” Such slogans, he says, are used both on the government radio and in meetings. He adds that:

Several reports by witnesses [témoi-gnages] even affirm that in numerous localities the wives and children of officers have also been done away with.

Secondly, I should not have identified the newspaper Prachachat as a “government paper,” but rather as a Thai paper, which on June 10, 1976, carried an interview with a Khmer Rouge official who said, as Ponchaud writes, that he found the revolutionary method of the Vietnamese “very slow,” requiring “a lot of time to separate the good people from the counter-revolutionaries.” It was the Thai reporter of this paper who drew the conclusion I quoted that the Khmers have “overturned the basket and with it all the fruit it contained, and will, from now on, choose only the fruit that suits them perfectly.”

My reference to the death of “one quarter” of the population in a single year must be corrected. Ponchaud’s text is as follows:

The unremitting work, the insufficient food, the deplorable sanitary conditions, the terror and summary executions permit us to imagine the nightmarish [hallucinant] human cost of the Khmer revolution. In 1970, the Cambodian population was estimated at 8 million people…. In 1975, Prince Sihanouk—here in agreement with the Americans—calculated the war dead at 600,000, to which figure must be added 600,000 wounded. On 17 April 1976, the first anniversary of the liberation, the Kampuchean authorities announced that there were 800,000 dead and 240,000 disabled veterans [invalides de guerre].

As for those who died during the “peace,” no one can put forward a figure with exactitude; but it is certainly more than a million. At the end of 1975, official diplomatic sources estimated a figure of 800,000 dead; sources from the American Embassy, 1.2 million; and the American relief services [services caritatifs] in Bangkok, 1.4 million. No one will ever know the precise number of victims but from listening to the accounts of refugees of the deaths in their respective families, the number is without doubt considerable.

Noam Chomsky, I should add, has questioned some of the figures cited by Father Ponchaud. He deeply distrusts those from US sources. He finds it extremely difficult to see why deaths from malnutrition and disease should be attributed to the Khmer Rouge rather than to the Americans who devastated the countryside and forced the population into the cities. He argues, among other criticisms, that it is unlikely that the Cambodians would have reported that 800,000 were killed and 240,000 disabled by the war, and that Ponchaud may have reversed these figures.

Noam Chomsky’s corrections have caused me great distress. By pointing out serious errors in citation, he calls into question not only my respect for texts and the truth, but also the cause I was trying to defend. I particularly regret the misleading attributions I mentioned above and I should have checked more accurately the figures on victims, figures deriving from sources that are, moreover, questionable. My reading of Ponchaud’s book was hasty, emotionally intense, too quick in selecting polemical points. But if I must plead guilty in handling the details of my review, I would plead innocent concerning its fundamental argument.

Faced with an enterprise as monstrous as the new Cambodian government, should we see the main problem as one of deciding exactly which person uttered an inhuman phrase, and whether the regime has murdered thousands or hundreds of thousands of wretched people? Is it of crucial historical importance to know whether the victims of Dachau numbered 100,000 or 500,000? Or if Stalin had 1,000 or 10,000 Poles shot at Katyn?

I fully understand the concerns of Noam Chomsky, whose honesty and sense of freedom I admire immensely, in criticizing, with his admirable sense of exactitude, the accusations directed at the Cambodian regime. He is seeking to establish the truth and also, I would think, to combat criticism which may have the effect of serving the interests of the Nixon-Ford establishment and its allies. Such criticism may please the champions of intervention in Indochina, who were responsible for the war in Cambodia and who are guilty—as I said in my review—of initiating and prolonging the blood-bath which still afflicts that unhappy country today. However, because denunciations of Stalinism pleased Senator McCarthy, would that have been good reason for remaining silent about the Gulag?

The pseudo revolutionaries in Cambodia have locked their country away from the eyes of the world, have turned many of their people into cadavers or mere cattle; they have not only killed Lon Nol’s officials but have also murdered their women and children, maintaining order with clubs and guns. I think the problem that presents itself today is that of the life of a people. And it is not only because I once argued for the victory of this very regime, and feel myself partially guilty for what is happening under it, that I believe I can say: there is a time, when a great crime is taking place, when it is better to speak out, in whatever company, than to remain silent. 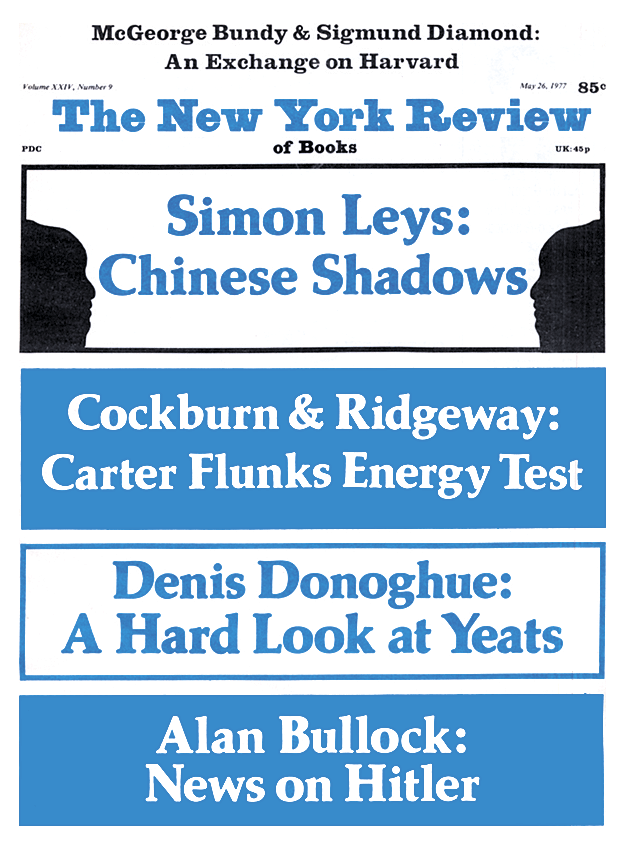 The Crime of Cambodia

The Croatians Are Coming

An Exchange on Cambodia

The End of Cambodia?

‘The Greatest American Shambles’: An Exchange