Garry Will’s article, “Benevolent Adam Smith,” in your issue of February 9, 1978, is most interesting and instructive as well as generous in its praise of the Glasgow edition of Adam Smith. Just because the review is so valuable (and not at all in any spirit of complaint at criticism on a single point), I should like to correct two things that he says about Hutcheson and one about “the Adam Smith problem.”

Imperial College of Science and Technology

Garry Wills may be applauded for trying to save Adam Smith from the Chambers of Commerce but I wonder if he has saved Smith from himself. Smith, Wills reminds us, extrapolated the law of value from exchange relations among actual human beings. To his credit, and ours, Smith thinks the species empathetic, morally disciplined, and reciprocal. He also thinks us compassionate and agreeable by nature, which explains why, for example, the butcher’s product will usually trade above its real value (Wealth of Nations, chapter X, 1., Pelican Classics, pp. 202-203).

Still, it seems to me that Wills has carried Smith’s rehabilitation too far:

look again at the concept division of labor…. People agree, Smith argues, to work together on one project by doing different things. The performer of one function cannot try to undercut the performer of another without defeating the whole cooperative endeavour. Competition does not arise at this level.

I should not deny Wills his assumption that Smith saw the workplace as engendering objective cooperation through the division of labor. I do dispute that even Smith supposes this cooperation to be mainly a result of the mutual agreement which proceeds from workers’ moral sentiments. Cooperation in the workplace exists because, Smith explains, the owner of the workplace organizes and commands for his private purpose the wills of workers whose labor he has purchased:

Wealth, as Mr. Hobbes says, is power…. The power which that possession immediately and directly conveys to him, is the power of purchasing; a certain command of all the labor…which is then on the market. His fortune is greater or less, precisely in proportion…to the quantity either of other men’s labor, or what is the same thing, of the produce of other men’s labor, which it enables him to purchase or command.

Smith does try to resolve the apparent contradiction between the master’s organizing power and the workers’ moral dignity by means of his subsequent assertions that labor contracts in market society are (and should be) voluntary; this, because the workers do (and should) agree to be organized for private utilitarian reasons (WN, chapter 1, pp. 114-115; VIII, pp. 167-168). To make this notion plausible, however, Smith resorts, not to a consideration of workers’ mutual empathy, but to two other premises: that workers could withdraw from any particular contract if their wage is not up to standard; and, more important, that the value paid for workers’ labor “is the same thing” as the value they add to their products.

These premises mar his masterpiece. First, as Marx would point out, workers will withdraw from a particular contract at their peril; combination is more difficult for them than for their employers, and they can anyway not withdraw from the market completely. So competition does arise at (or below) the level of the workplace, i.e., among workers anxious to secure and maintain a place in it. Smith was, ironically, no less aware of these considerations than Marx; he had, after all, read Malthus (WN, chapter VIII, pp. 169 and 183).

Second, Smith’s presumption that the value of labor is equal to the value of labor’s products—the more crucial assumption in view of the private, utilitarian principles to which he expects workers to subscribe—suggests the impossibility of profits’s source: i.e., surplus value. Smith avoids this paradox, Marx assures us, in the most “vulgar” way: by conveniently—and erroneously—resolving all exchange-value into the categories “wages, profit, and rent” (see Marx’s Theories of Surplus Value, Vol. 1, Progress Publishers, Moscow, pp. 77-103).

Division of labor thus derives from the organizing power of capital. Granted, sentimental Smith was determined to view all exchange relations in the market as voluntary, including the exchange of labor. But this view is a good deal more contrived than Wills would have us believe. The principle of private maximization (supported by “vulgar” science) will never quite qualify as deliberate cooperation. And Smith is still not the prophet we need. 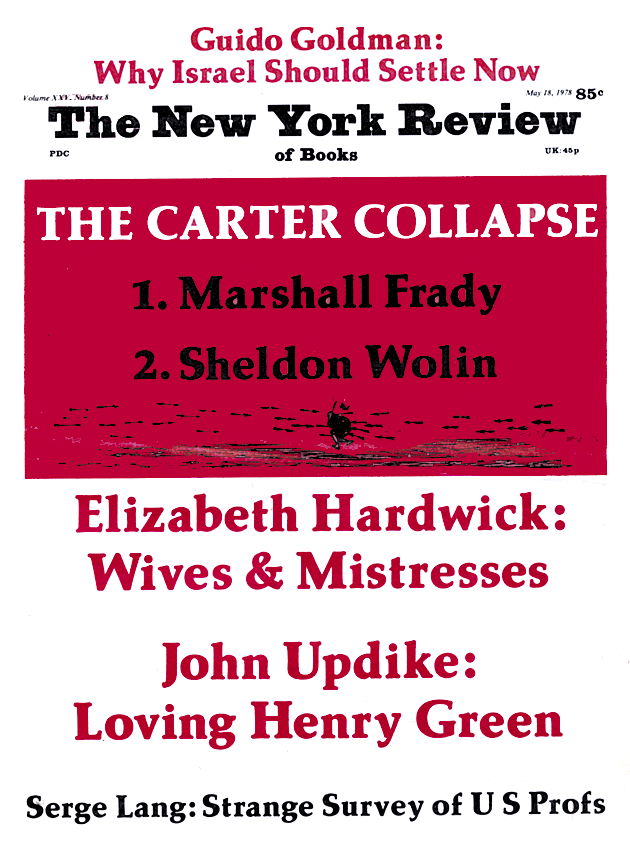 ‘Catching a Pig on the Farm’

The Man Who Set the Clock Back

Silence Bigger Than a Table