Military cartographers sometimes employ a device called an “overlay,” a sketch on transparent paper of some special feature such as the deployment of artillery batteries; placed atop a regular map of the area and keyed to it, the overlay thus easily becomes part of the real map itself. Overlying those regions our atlases of Africa call Chad and Niger, their borders straight-edged over desert and mountain by some nineteenth-century colonial administrator in Paris and mapped still that way today even though de Gaulle decamped almost twenty years ago, there lies the country of Kush, 126,912,180 hectares of “delicate, delectable emptiness,” with twenty-two miles of railroad, one hundred seven of paved highway, ground-nut plantations, some millet, sorghum, cotton, yams, dates, tobacco, and indigo; the blue nomad Tuareg slavers in the mountains to the north, fearsome riverine animists to the south, two Boeing 727s, an Islamic Marxist dictator who calls himself Colonel Ellelloû, an imprisoned king, a disastrous five-year drought that is causing its population (of the density of .03 per hectare) to starve, an ample treasury of diseases; a vast white and green Palais d’Administration modeled on the Louvre, and no more elephants at all: John Updike, sole owner and proprietor.

The average life expectancy in Kush is thirty-seven years, the per capita gross national product $79, the literacy rate 6 percent. The official currency is the lu. The flag is a plain green field. The people are eating thorn-tips, wild nettles, crumbs of grain from anthills, bark. Even the most brackish water holes have been drunk dry.

Updike was in Africa in 1973, one of the years of the great drought that reduced the always barren country around the Sahara to an absolute waste land. Out of what he saw, out of many books, and out of his own head he has made the nation of Kush. It is an audacious creation and there must have been some magic in it too because the entire nation is there in all its splendor, farce, and misery.

With much nerve and surely with some luck, Updike invented his Africa not the way other white novelists have done. He did not dispatch a Henderson or Lord Greystoke, some Francis Macomber or one of Paul Theroux’s emissaries, or even a Basil Seal or a Marlowe to suffer his shock in the heart of darkness. Updike’s book is written by the dictator himself, Colonel Hakim Félix Ellelloû. The Colonel is short, prim, and black. He is appealing and wicked, and to me at least he is like Africans I have known except that Updike knows him better than ever I knew an African and I knew them for years. The Colonel is frightening and I think he must have frightened Updike too, in a way that has done wonders for his writing.

In some twenty books of fiction, poetry, and criticism, Updike has tried to bring legend to his own America. He tried to give significance to the dumpy amours of housewives and dentists by lavishing on them many more metaphors than they knew what to do with.

Only Bea’s presence, a circle like the mouth of a white bell of which her overheard voice was the chiming clapper, promised repose. He remembered her as a calm pool in which he could kneel to the depth of his navel.

Things acted with occult anima, mail spurted itself through thrilled slots, whiskey hurried, clocks could hurry too. Even there were miracles: God’s own lightning could strike sin.

And the language was not just embroidery on nothing. Updike is a master of the techniques of modern fiction. His novels are solid with plot, character, and thought, as well as with melodious diction. He knows intimately the way the American middle class walks and talks, and knows every room in their “homes” and how they earn and spend money. He knows all too well how they fornicate. Why then should I say that I felt always something of the precocious in these substantial and skillful novels? It was as if some very clever boy with a great gift for language—“a terrible sweet tooth for language” as Anatole Broyard once remarked of some different novelist—some clever boy was spying on the grownups with clairvoyant eyes for every gesture, every follicle and sebaceous cyst, but no real idea of why they are carrying on so disgustingly, or that to them it may not be ugly and evil to make love with another imperfect creature. That is why although it was right for Faulkner to use his Shakespearean powers on the ignoramuses of Mississippi, for Nabokov to give his murderer a fancy prose style—for that matter all right for Joyce—it has never seemed to me Updike quite got away with it. However it is not wrong to invoke these great names in the presence of John Updike’s name.

In “Colonel Ellelloû”—“Félix”—“Hakim”—“Bini”—“Happy”—Updike has found his perfect spokesman. Over-educated in the French classics, overexperienced at Dien Bien Phu; overexposed to the dialects of the heartland of America at McCarthy College, Franchise, Wisconsin; oversold by Elijah Muhammad in the deviltries of whites and the glories of Islam: Félix is perfectly prepared to overwrite, and proud of it.

Rather than risk confrontation with the soldiers and their doxies quartered in the fourth-floor corridor, who, if not fully alerted to the nuancé shifts of top-echelon leadership in Kush, certainly had caught the smoky whiff of tabu that now attached to Ezana, he, by a series of ripping, knotting, and measuring actions that like certain of these sentences were maddeningly distended by seemingly imperative refinements and elaborations in the middle, constructed a rope of caftans and agals and descended, through the silver kiss of the last moon of Safar, down the wall, in his terrified descent accompanied by his indifferent shadow, a faint large bat-shape whose feet touched his abrasively.

It is a kind of fancy writing that is appropriate and has precedent. “Quand les clameurs des villes terrorisées par la lumière pisseuse des fusées,” so goes a passage in Le devoir de violence by Yambo Ouologuem, of about Félix’s age, from Mali, one of the lands nearby the nation of Kush: “When the shrieks of the cities terrorized by the urinous light of flares and bombardments gave to corpses the odor of eternity, many a one lay in wait for the invisible enemy as a sick cloud for the desert of salt it cannot cross without a caravan.” So, with some improvement in the correspondences of the simile, might Félix speak with flowery echoes of French. (It seems he is writing in English.) And just so, Félix’s violent hatreds, of whites, of those who would forget the traditions he has learned from the griots, minstrels of history in his own land as in Mali, as in Ouologuem.

Besides, giraffes take kindlier to exotic prose than the housewives of Pennsylvania and Massachusetts. “Drifting like clouds the giraffes would canter away, their distant mild faces unblaming, the orbs of their great eyes more luminous than the moon.” That is what they look like, giraffes.

The story jumps back and forth from farce to violence and from Kush to Franchise, Wisconsin. It is being told in his memoirs by the retired Colonel, where every detail of the story as plot appears most naturally and yet they are introduced, these details, even such little things as names, with the flair of a grand thriller. We learn early on that Félix has four wives; we are received by them, one by one, in the manner that only the best storytellers use in their invitations to meet people. Each is a brilliant surprise.

So, not at all to reproduce the manner of the telling, which is swift but intricate and never in serial chronology, sometimes in the first person and sometimes in Félix’s view of himself in the third person—simply to give an idea of what it is about, it is about the ruler of a Waste Land. Félix, low in status in his village, enlists at seventeen in the Troupes coloniales, fights as a sergeant at Dien Bien Phu, deserts when ordered to fight against the Algerian uprising, and makes his way to Wisconsin. After four years there—remembered in flashbacks during his adventures in Kush, flashbacks of dazzling intensity in which the surrealist quality Updike has always given American things and people seems quite right—through African eyes—after that, converted to fanatical Islam, he goes home, pulls off a coup in 1968, and in 1973 finds his country a waste land. American aid he rejects—rejects!—he burns it up, Kix Trix Chex Pops and all, along with the aid administrator. He kills the old deposed king. “By the sword in my hand I shall cleanse the land!” But still no rain. So he goes on a quest into the farthest mountains. Yes, there are roots that clutch, and there is fear in a handful of dust. There are Russians from the secret missile base, drunk on vodka and looking like wild pigs. He all but dies, there is no water, no shelter, not even a red rock. The climax I must not betray. It is cooked up partly from H. Rider Haggard and partly from the Marx Brothers, and very well served it is too.

But throughout we are back in America—“America, that fountainhead of obscenity and glut”; Félix of course hates it and loves it and it determines his life and the life of kush. It is as if his own dreams bring America to Kush, as he brought an American wife

Félix can speak out, as Updike never quite could, with frankness what it is he hates and what he loves. Félix is very hard indeed on American blacks, American breakfast food, and on “Klipspringer,” the all knowing American global fixer. Félix is brilliantly hard on the Russians and on the slaveholding sheikdoms of Araby.

There is not a sentence in this book I will not gladly read again for instruction and delight. I woke up this morning laughing and sad, thinking of Félix as we do about our dear friends. Has the reviewer, then, as he is swept off his feet, no misgivings? Not as a professional reviewer, of fiction, no. This novel will do as well as any made these days.

The king of Brobdingnag dropped some famous observations on a visitor, one, that he could not but conclude the bulk of your natives to be the most pernicious race of little odious vermin that nature ever suffered to crawl upon the surface of the earth. Gulliver felt the force of that, but knew from his experiences as a traveler it was not true. There were plenty worse. The king also observed as everyone recalls that whoever could make two ears of corn or two blades of grass to grow upon a spot of ground where only one grew before, and so on. Maybe the pitiless white deserts of Africa are to be preferred to our own amber waves of grain, and fanatic jihad to our quiet enjoyment of television, beer, and pork sausage. We did not really seek or lose our last war, we simply got it and got out, too late, but we did it. Our automobiles do not die as nobly or so usefully as Updike tells us camels die. We are middling folk and proclaim it endlessly. Were I Updike’s publisher I should make him now a fat advance to voyage to his own ideal land of the Houyhnhnms and tell us what he sees there and why we should emulate it. 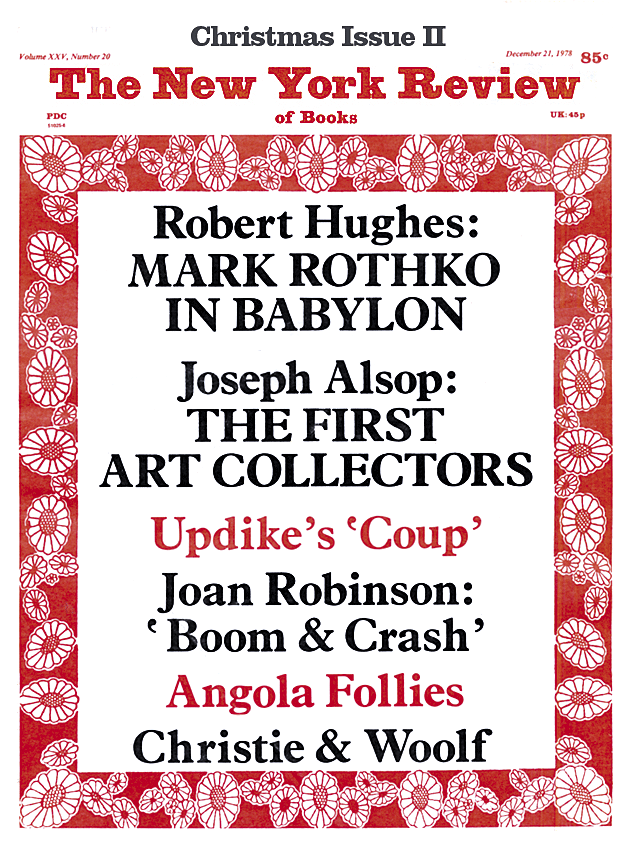