edited and with a preface by Gunther Stuhlmann
Harcourt Brace Jovanovich, 355 pp., $14.95

Art teaches us how to levitate, Anaïs Nin was fond of saying, and in Volume Seven of Nin’s Diary her toes seldom touch earth. It isn’t art that’s keeping her aloft, however, it’s fame, favorable reviews, rapt adoration. Volume Seven covers the final years of Nin’s life, as she emerges from the whispering shadows of cultdom to glide from lectern to lectern in her new role as the counter-culture’s Lady Oracle. (Nin died in 1977, after a long bout with cancer.) In the closing pages of Volume Six, Nin celebrates the cloudburst of approval which greets the publication of the Diary’s first volume in the spring of 1966. Lawrence Ferlinghetti showers her with rose petals in a Berkeley bookshop, love letters crowd her mailbox, and reviewer Robert Kirsch swoons at length about her “poetic and supple” prose in The Los Angeles Times. As Volume Seven opens, Nin is still soaking happily in the ironies of success: “The same publishers who turned down my work beg for my comments on new works they are publishing,” she notes with rueful pride. Even media personalities lower their knees in homage. “Television interview with Arlene Francis very deep. She knew my work. She is enormously intelligent and wise.” Once you’ve tasted the wisdom of Arlene Francis, lesser fizz won’t do.

Her genius vindicated, Nin finds herself constantly on the wing. She travels to Morocco, Japan, Germany, Bali, Cambodia; she descends upon hundreds of campuses, giving sixty lectures in a stretch from autumn 1972 to spring 1973; she stars and tours with a documentary by Robert Snyder titled Anaïs Nin Observed; and everywhere she goes she’s bombarded with love. In Paris, Nin and Jeanne Moreau discuss a film adaptation of Nin’s novel A Spy in the House of Love. Though Spy was never made, Moreau later directed and starred in Lumière, a film that (unwittingly, one assumes) captures the haughty narcissistic glamour of life among the Ninnies. Surrounded by women who adore her and men who worship her unblemished soul, Moreau’s Sarah Didieux also seems to be exaltedly aloft. “At the end of the week,” writes Pauline Kael in her review of Lumière, “she wins something like the Academy Award, except it’s at a ceremony where she is the only one being honored, and her girlfriends and boyfriends are all there, gathered around, to be happy for her.” Like Lumière, Volume Seven of the Diary is a cozy get-together. Sandlewood incense wafts through the air, wind-chimes tinkle, and into Nin’s hands tremulous coeds press flowers, cookies, rice cakes, unfinished novels. The self-trumpeting climax of this celebration begins on page 200, where Nin lists tributes from readers whose lives have been transformed by the Diary. Sample comments:

When I read the Diary, it took wings! All was transcended. Like some immense swan, it took me on its back lifting me into the air—that now familiar air of your vision which I draw in like strength, like purity, like invisible draughts of growth.

You speak rain words which fill the saucer eye of a parched insomniac.

May you know whom you have touched, awakened, raised from the dead. May you know the legacy you have already left, the soil you have watered, the seeds planted, all the solar barques you have launched toward the sun.

Through your words, your refractions of experience, I have come upon the thresholds of my soul.

You have revived the intuitive, caring woman in me and I feel I’ll be a better therapist for it.

All that sensitivity—a roomful of Thurber harpies couldn’t be more frightening. (Or perhaps one should invoke Jules Feiffer—a therapist inspired by Anaïs Nin sounds like one of Feiffer’s more twisted fancies.) In Anaïs Nin Observed, the most pleasing thing is the contrast between Nin’s gracious French chirpiness and her friend Henry Miller’s Brooklyn rasp; but in the Diary every voice throbs with the same fruity lyricism. Nearly all of Nin’s correspondents sound like Nin herself, something she’s proudly aware of. “There was no ego in the Diary, there was only a voice which spoke for thousands, made links, bonds, friendships…. There was no one self. We were all one.” As Nin and her admirers trade confidences on astrology and self-realization, scattering showy adjectives like “luminous” and “labyrinthine” through their letters, the book becomes a choral hymn to hazy-mindedness.

Occasionally a few rude notes ruin the harmony. Nin is unnerved when “aggressive” feminists give her the raspberry during her talks. She complains to artist Judy Chicago, “At Harvard, three hostile, aggressive women prevented me from finishing my talk. Really psychotic! I was ashamed of them.” One woman, described by Nin as “fat and gross and aggressive,” corners her after a lecture and says she works fifty hours a week and doesn’t have time for a fancy-schmancy, inner journey. Nin never seems to realize that feminists resented her influence not because they were envious but because they considered her Aquarian Age go-with-the-glow dreaminess “feminine” in the most softheadedly reactionary way. With their love of the ineffable sublime, the Nin cultists aren’t much different from the P.G. Wodehouse heroine who believed that bunny rabbits were gnomes in attendance on the Fairy Queen. “Perfect rot, of course,” grumbled Bertie Wooster in The Code of the Woosters. “They’re nothing of the sort.”

Even more troublesome to Nin than feminists are treacherous reviewers and fellow novelists. To Nin, critics are little more than fiends pitch-forking innocent babes into the furnace. (“Gore Vidal is now a critic, which means he is cremating people,” she observes sourly in Volume Six. Vidal, whose memorable pan of Nin appears in Homage to Daniel Shays, is also the villain of Volume Seven.) In the winter of 1970-1971, Nin meets Edmund Wilson at the Princeton Club to receive his permission to print portions from his “portrait” in one of the Diaries. To her surprise, Wilson not only chuckles at the passages she assumed would anger him, but later sends a letter saying how charming he found her company. Sniffs Nin: “Of course I never asked him why, after praising Under a Glass Bell, he never mentioned me again.”

What makes the Diary such a comedy is that though Nin comes on as an ethereal yenta, gathering coeds like chicks beneath her silky wings, she’s so relentlessly, spitefully competitive. After saying a few kind words about Marguerite Duras in Volume Six, for example, Nin can’t resist quoting someone who praises her for being “more genuine, more human” than Duras. Even old friends like Lawrence Durrell get their knuckles rapped.

While Henry [Miller] and Larry incensed each other, the women discovered me.

Larry talked about a discussion with Joaquin [Nin’s brother] in the thirties on wanting to achieve polyphony. Joaquin said it could not be achieved in writing: “Don’t try to be a Mozart.” But Larry did try and describes it in an interview as “palimpsest.” Is he aware that I have done it? He has gone into intellectual abstractions (Tunc). He is sterile. With time could I have reconnected him? His defenses, humor and impersonality are slippery.

The image one has is of Nin bending under the hood of Durrell’s psyche, screwing in new spark plugs.

Decades before the Diary was published, Henry Miller claimed that Nin’s confessions would someday be ranked with those of Augustine, Petronius, and Rousseau. Yet as chronicle and gossip, the Diary is little more than a long tease, a fluttering of veils. In the diaries of Dorothy Wordsworth and Virginia Woolf, small moments inch across the page—visitors sip tea, frost forms on the windowpane—and yet one is always aware of an acute intelligence reaching beyond the day-to-day. Not so in Nin. When she travels to Bali and Fez, she revels in the exotic sensations of new aromas, new fabrics; but otherwise the details of her life are obscured by a perfumey mist. She doesn’t seem to see—a Dorothy Wordsworth snowfall is worth a dozen descents into the labyrinth—and she uses clusters of adjectives where a single metaphor might do. And except for the large-scale portrait of Henry Miller and a few vivid glimpses of Artaud, Wilson, and Tennessee Williams, Nin seldom writes about people with novelistic exactness—she shrouds them in language too pretty to be anything but platitudinous.

Of Marguerite Young (Miss MacIntosh, My Darling), she enthuses, “Her hair weeps, her eyelids weep, but when her voice takes up the rhythmic spirals of her writing it is the female soul of Joyce, Joyce without the male ego, the intellectual juggler with language, it is the waves, the ocean of myths…,” and upward Nin spins in her own rhythmic spiral. Famous Names serve to confirm or deny her genius; unfamous admirers, like the mostly homosexual clique of “transparent children” in Diary Four, circle Nin, then ungratefully scatter. Flattery and betrayal form the Diary’s alternating currents.

Now that this final Diary has joined Nin’s novels, essays, and prose poems on the shelf, it’s clear that her great gift was not for literature but for friendship and persuasion. For letters, lunches, blurbs, and lectures. Her surrealism is tame, a grazing of lazy centaurs. Even more embarrassing are her attempts at moist, hot sensuousness, not only in erotic entertainments like Delta of Venus and Little Birds but in a more ambitious effort like A Spy in the House of Love (only a writer beyond shame and taste could describe sexual intercourse as “a joyous, joyous, joyous, joyous impaling of woman on man’s sensual mast”). But her career—her life—was a masterpiece of self-promotion.

The Nin industry will undoubtedly continue the promotion through tributes, analyses, reminiscences, photograph albums, and collections of letters; friendly critics will persist in trying to persuade us that she was a Proustian enchantress; but I suspect the hilariously vain aperçus of Volume Seven will do more damage to her reputation than the cruelest slice from villainous Vidal. “So I shall die in music, into music, with music,” she writes near the end of her struggle with cancer. Foolish sibyl that she was, Anaïs Nin gives herself a graceful send-off in the book’s final pages, and her admirers will probably cling to their affection for her long after they’ve outgrown these preposterous Diaries. 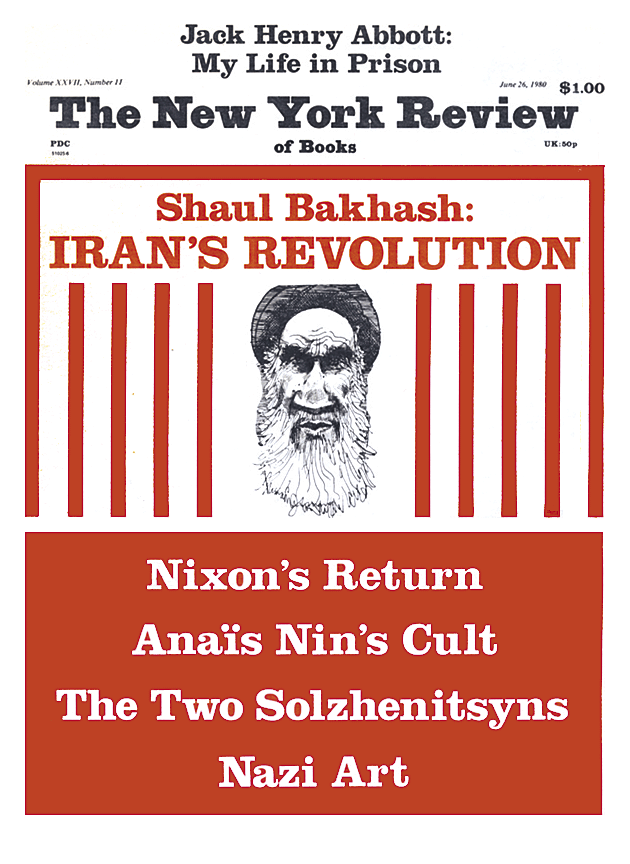 The Man Who Wanted Everything

The life of Jann Wenner and ‘Rolling Stone’

The Man Who Wanted Everything

The life of Jann Wenner and ‘Rolling Stone’

James Wolcott is a columnist for Vanity Fair. (October 2018)