On January 15 this year, Valerie Eliot presented the third annual T.S. Eliot prize to the American poet Mark Doty for his collection My Alexandria. The previous two winners, Ciaran Carson and Paul Muldoon, were from Northern Ireland, and many a British poet will be wondering when his turn will come. The fact is that several London literary prizes have an international definition of their scope of contestant. The Booker Prize for fiction defines its “community” as being any English-language novelist except the Americans. This may sound unfair but is probably practical. It also reflects, co-incidentally, a legal definition found in literary contracts, which often include all the major English-speaking countries except the US.

The T.S. Eliot Prize is for a new collection of poetry, in English, published in the previous year in either the UK or the Republic of Ireland. This definition is very tactful, and practical. It means that a poet from Northern Ireland will be eligible, whichever community he or she comes from, and however that community is to be defined. The roots of this tact reach back to around 1983 when Seamus Heaney wrote. “An Open Letter,” a 198-line poem addressed to Andrew Motion and Blake Morrison, attacking them for including his work in what they called The Penguin Book of Contemporary British Poetry. He wasn’t British, he said, he was Irish and always had been Irish.


My passport’s green.
No glass of ours was ever raised

To toast The Queen.

Motion and Morrison were some-what shocked and dismayed. For a start, Heaney’s work was at the very heart of their anthology, at the center of their view of the contemporary scene. Less importantly, it had previously appeared in at least six anthologies with the word “British” in the title. Finally, they had probably assumed that the poets of Northern Ireland were loosely speaking British, in the sense that they came from the United Kingdom of Great Britain and Northern Ireland. Heaney was saying, in somewhat rough language, that he refused to recognize this entity.

Still, the notion of Northern Ireland as being part of the same literary world as Great Britain, the feeling that we belong to the same community, has not died out on what is sometimes called the mainland. One would feel, as an English poet, rather queasy about accepting a prize for which only English poets were eligible. There would seem to be some sinister nationalism lurking in the background. As for a prize which was only for mainland Brits, that would seem unfairly exclusive of Ulster Protestants, or at least potentially so (one would have to ask them individually whether they felt excluded).

Over recent years, nationalism has become an increasingly nuanced business for all of us, and it is illuminating to see how it gets defined, and how community is defined, in cases where a legal or quasi-legal definition is needed. And where the issues are practical: whose book is to be considered for the Poetry Book Society Choice? The PBS, of which Eliot was one of the founders, administers the T.S. Eliot Prize, and its four annual choices are automatically included on the short list. Practically speaking, a member of the PBS would feel a bit swindled if he were never to receive a collection by, say, Derek Walcott or Les Murray, if he learned that these authors were being excluded on the grounds that (as it were) their papers were not in order.

What about America, then? At the level of rhetoric, it is possible to try erecting barriers. It is possible for Helen Vendler to introduce her anthology, The Harvard Book of Contemporary American Poetry, with a declaration that:

The intimate linguistic charm of poetry stops at the frontiers of its original language; the intellectual and moral command of poetry survives translation. This anthology of American poetry will be able to extend its charm only to those who genuinely know the American language, by now a language separate, in accent, intonation, discourse, and lexicon, from English.

Although Vendler goes on to say that the poems she has collected “can extend their command to anyone able to read English,” she has nevertheless erected an obstacle here. Do I “genuinely” know the American language? Am I familiar with its “lexicon”? Its separate lexicon? Er, no. I don’t think I am familiar with anything so grand as a separate American lexicon, and at a practical level I hardly care two hoots.

At the practical level, English is a world language, and anyone who reads or writes poetry in English will be happy to take advantage of the fact. More than that: the history of poetry in English is only comprehensible if you take into account what has happened in different countries. British poets of my generation looked to Eliot and Pound to learn how to write and what to read. This was not a matter of syllabus—most likely the influential books in question were not on any syllabus we studied—but of choice. This was in the culture, as was the taste for American poetry of the Lowell-Berryman generation. When a novelist friend rang me up recently recommending a certain collection of poems and said, “It’s wonderful, it’s like reading Robert Lowell again,” I took this as meaning: it’s like being a student again, and reading Lowell’s poems when they were new.

The book he was referring to was Mark Doty’s My Alexandria, of which the first poem (“Demolition”) contains a homage both to Lowell the man and to individual poems, particularly “For the Union Dead.” And this homage is not encrypted—it is written out en clair. It is as if Doty were saying: You remember the way Lowell used to write in his best period—in Life Studies, For the Union Dead, Near the Ocean. Well, what’s to stop us having a go at the same sort of thing? As long as we acknowledge our debts, why should we not go to school again with Lowell and see what benefit we can derive from it?

So it is that in “Demolition” we find the author reading a biography of Lowell, dreaming of him, dreaming of being him, then, coincidentally, running from a rainstorm, and finding himself sheltering near the plaster maquette of Saint-Gaudens’s monument to Colonel Shaw and his black soldiers (the monument evoked in “For the Union Dead”).

We love disasters that have nothing to do
with us: the metal scoop seems shy, tentative,
a Japanese monster tilting its yellow head
and considering what to topple next. It’s a weekday,
and those of us with the leisure to watch
are out of work, unemployable or academics,

joined by a thirst for watching something fall.
All summer, at loose ends, I’ve read biographies,
Wilde and Robert Lowell, and fallen asleep
over a fallen hero lurching down a Paris boulevard,
talking his way to dinner or a drink,
unable to forget the vain and stupid boy

he allowed to ruin him. And I dreamed
I was Lowell, in a manic flight of failing
and ruthless energy, and understood
how wrong I was with a passion- ate exactitude
which had to be like his….

It’s a gutsy act: appropriation, in a poem whose overall subject is the demolition of a concrete building in a New England town that could, for all we know, be Boston. At the heart of the matter is the idea that “We love disasters that have nothing to do / with us….” We are fascinated to see a great building destroyed. Somehow implied is the thought that the destruction of a human being with whom we have everything in common, that is another matter. But that theme is left for other poems.

My Alexandria is a conscious evocation of a personal bohemia, with its culture of gay bars, drag queens, and performers. It is tenderly evoked—if Doty were a photographer he would be closer to Peter Hujar than to Robert Mapplethorpe—and allowed its Arcadian phases.

In a dress with a black tulip’s sheen
la fabulosa Lola enters, late, mounts the stairs
to the plywood platform, and begs whoever runs
the wobbling spot to turn the lights down

to something flattering. When they halo her
with a petal-toned gel, she sets to haranguing,
shifting in and out of two languages like gowns
or genders to please have a little respect

for the girls, flashing the one entrancing
and unavoidable gap in the center of her upper teeth.
And when the cellophane drop goes black,
a new spot coronas her in a wig

fit for the end of a century,
and she tosses back her hair—risky gesture—
and raises her arms like a widow in a blood tragedy,
all will and black lace, and lip- syncs “You and Me

against the World.” She’s a man
you wouldn’t look at twice in street clothes,
two hundred pounds of hard living…
(from “Esta Noche”)

Living on the street, sleeping in the parks, can be for the characters in this bohemia a way of living in heaven. Casual sex, too, belongs to the Arcadian phase. Then along comes AIDS.

The best poem in the book is “Fog,” in which the author and his friend have both been taking blood tests, which eventually reveal the friend to be HIV-positive, and the scope of the rest of the collection is the period between the diagnosis and the onset of AIDS. So the subject is the disaster that has everything to do with us—learning of a loved one’s imminent death and beginning the descent into grief. The poet’s intention is to make his particular experience, in all its specificity, representative. He believes that the best way of making an experience representative is by that devotion to the particular, those lessons he has learned from his presiding spirits, Lowell and Cavafy.

Cavafy ends a poem
of regret and desire—he had no other theme
than memory’s erotics, his ashen atmosphere—
by going out onto a balcony

to change my thoughts at least
by seeing something of this city
I love,
a little movement in the streets,

in the shops. That was all it took
to console him, some token of Alexandria’s
anarchic life. How did it go on without him,

the city he’d transformed into feeling?
Hadn’t he made it entirely
into himself?
(from “Chanteuse”)

My Alexandria (1993) is Doty’s third book. It was preceded by Turtle, Swan (1987) and Bethlehem in Broad Daylight (1991). Since then there has been Atlantis (1995). There were many satisfactions for the judges in being able to award the T.S. Eliot Prize to My Alexandria (which has also received much recognition in the States). The intention of the prize is to recognize an individual volume, not a lifetime achievement, and this individual volume hangs together so beautifully that it seems like a single orchestrated work.

But there is also interest—when a prize is new and relatively untried—in seeing how it is going to work in the long run, putting the prize, as it were, through its paces. The rules define the scope of the prize. The recipients of the prize provide a further definition. One wants this prize to become a record of the outstanding work within the international community of our poetry. Each award should tell us a little more about what that community is, what its limits, what its frontiers are, and whether indeed it is right to speak of frontiers at all. 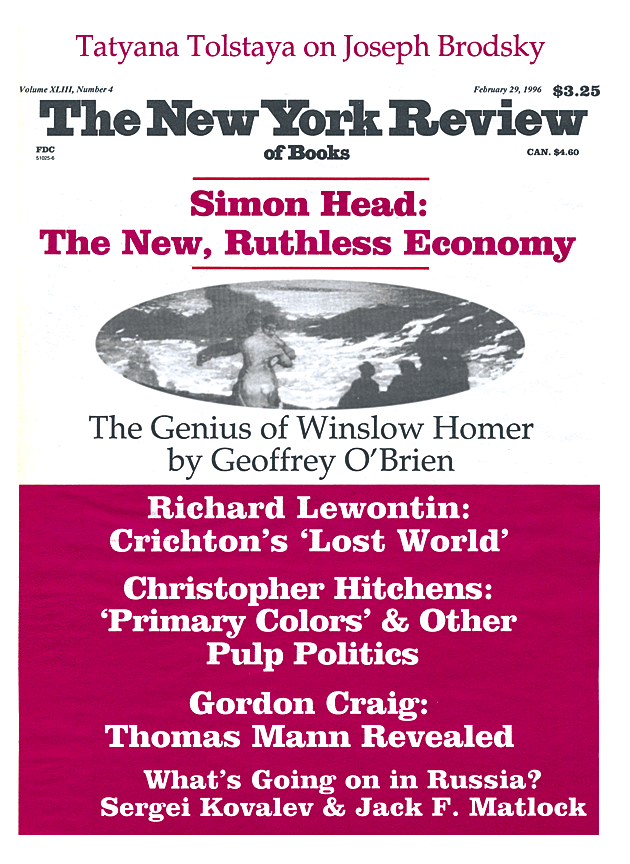