It occurred to me that you might be interested in publishing the enclosed excerpts from the letter from Dr. Jack Kevorkian to Chief Justice William Rehnquist. (I’m informed he sent the same letter to all nine justices last fall; he received notification that they’d received his letter, but none of them replied.)

You may remember that in November 1998 60 Minutes broadcast the videotape Kevorkian had recorded of his own act of euthanasia on Thomas Youk, for which he is currently serving ten to twenty-five years in a Michigan prison. He is now forbidden by the Michigan authorities to talk with the press in person. I have added a note of my own concerning Kevorkian and the case of Timothy McVeigh.

The issue of medical euthanasia, or physician aid in dying, is now of prime importance in the United States and several other countries. Clarification of its relation to rights and laws is urgently needed. Is the procedure to be governed by a capricious farrago of variegated state laws, or is it to be accorded the exalted status of a uniform, all-pervasive constitutional sanction?…

Medical art and science are entirely secular and serve a dual purpose: to lengthen life and to preserve or enhance its quality. Theoretically both aims are equally important, but arbitrary (and mainly sectarian) bias fostered an obsession to prolong life, no matter how inimical to its quality. The benefits of medicine permit its practitioners to perform acts that ordinarily are crimes. Thus we condone and even laud surgical mutilation…as well as the occasionally nearly lethal poisoning of chemotherapy. The resultant quality of life is always subordinate to the chief aim of prolonging it. Why shouldn’t the ranking sometimes be reversed? Why should we not just as readily condone and laud the chief aim of expunging—humanely, quickly, and with certainty—an intolerably low quality of individual life through a medical act ordinarily deemed to be homicide?

The mere availability of the euthanasia option often improves the quality of, and even prolongs, the lives of many terminal or incurably suffering patients. Having such a choice seems to dissipate the panic of helplessness by assuring a modicum of personal control. Consequently the vast majority of patients go on to die “naturally” and with few complaints despite continued excruciating suffering. This greatly eases the burden of families and caretakers. My own extensive experience and that of physicians in the Netherlands, Australia (where a corroborative study is planned), and Oregon confirm this finding. Furthermore, there is no doubt that unfettered access to this option coupled with unencumbered medical consultation will dramatically improve the quality of life and drastically reduce the appalling suicide rate among the lonely, isolated elderly.

That medical euthanasia is a just and honorable procedure becomes obvious from its comparison with the justifiable homicide of judicial execution by lethal injection. The first major difference is in the intent. A physician’s only aim is to end the subject’s suffering (positive result) which unfortunately entails death (negative result), balancing out to neutral at best. The executioner’s only aim is the subject’s death (totally negative) in behalf of society’s additional aims of inflicting punishment, extracting retribution, or coercing penitence, all of which is totally nullified by the death (negative); and the executioner’s role in wreaking society’s vengeance makes the balance here abysmally negative….

Medical euthanasia was honorable and widely practiced in ancient Hippocratic Greece but later criminalized by the Church. The Renaissance philosopher-scientist Francis Bacon advocated that “the medical profession should be permitted to ease and quicken death where the end would be otherwise only delayed for a few days and at the cost of great pain.” In seventeenth-century England Sir Edward Coke, a distinguished lawyer and judge, dismissed charges against a physician who openly performed euthanasia. It was Coke’s dictum that “how long soever it hath continued, if it be against reason, it is of no force in law.” Accordingly, the long-continued criminalization of euthanasia is of no force because it is flagrantly against reason.

Almost two centuries later Thomas Jefferson advocated the use of a drug to end the terminal suffering from “the inveterate cancer.” In 1910 Mark Twain asked his physician to end his suffering from heart disease. Dr. Sigmund Freud’s terminal agony, and also in 1936 that of England’s King George V, ended with injections by their personal physicians, both vociferous advocates of the practice. The late distinguished American physician and author Dr. Walter Alvarez several decades ago published his strong endorsement of medical euthanasia. Today more than half of all American physicians and an overwhelming majority of the public favor decriminalization of the practice, and a significant number of physicians admit to performing it furtively. The state of Oregon has permitted a limited form of aid in dying through ill-advised, overly restrictive legislation. It appears that the state of Maine may soon do the same. These state laws prohibit the most humane and preferable method of lethal injection.

The Constitutional Court in the predominantly Catholic nation Colombia in 1997 declared simply and correctly that access to medical euthanasia is a right of the people. The Netherlands now is in the process of formally decriminalizing it after two or more decades of having permitted the practice within carefully set guidelines. It is also allowed in Switzerland, Germany, and Uruguay, and may soon be legalized in Catholic Belgium and France, and in Japan. One must wonder why the English-speaking countries lag in this humanitarian trend.

All physicians will not want or, by temperament, be able to perform euthanasia. For them and for patients alike it’s a mat-ter of free choice based on personal belief, faith, or philosophy of life. The service should be a kind of medical specialty staffed by experienced and competent practitioners to whom reticent colleagues may refer inquiries. Because medical guidelines change frequently as a result of research and clinical experience, such procedural details cannot be dictated by law.

The Colombian High Court’s action is exemplary. For the sake of unnecessarily suffering humanity I respectfully implore your High Court to exercise its prerogative under the supreme authority of the Ninth Amendment by validating as constitutionally protected the choice of suffering patients to request medical euthanasia and the choice of physicians to assess all aspects of that request and to honor it according to stringent guidelines. This right is as fundamental as that of life or liberty, and is certainly worthy of being the first right officially empowered through the Ninth Amendment. Concurrently it is essential that a commission of highly respected physicians be impaneled to establish the guidelines.

As a secular profession medicine is relevant to the full spectrum of human existence from conception through death. Any arbitrary legal constriction of that relevance is irrational, cruel, and barbaric. As guardians of human rights, you and your colleagues have the authority, opportunity, and obligation to rid society of this lingering medieval malady by using the Ninth Amendment to guarantee this most precious and humane right of choice for all Americans.
Sincerely and respectfully,

A Note on Dr. Kevorkian and Timothy McVeigh
Mike Wallace

When Timothy McVeigh is finally put to death, as he has asked, his demise will come through a needle inserted into his body—a needle that will carry the same three chemicals Dr. Jack Kevorkian injected into Thomas Youk, as he too had asked more than two years ago. First, seconal to induce quick sleep, then a muscle relaxant to stop breathing, and finally potassium chloride to stop the heart.

Painless death, sanitized. Death administered by the state for one, mercy death for the other. But the similarities end there. McVeigh killed 168 people, Kevorkian just one, one who along with his wife and brother had pleaded for Dr. Kevorkian to help him escape the unceasing pain he’d endured for so long from the Lou Gehrig’s disease that invaded and wasted his muscles, his lungs, then his entire body.

Today, the pathologist known as Dr. Death sits in a six-by-ten-foot cell in a Michigan prison serving the ten- to twenty-five-year sentence levied on him by an Oakland County, Michigan, judge. I’d come to know Kevorkian after he sent me a videotape, at my request, of the moments leading to the death of Thomas Youk. On the tape, which we broadcast on 60 Minutes in November 1998, it became apparent that Mr. Youk was incapable of committing suicide by himself, and Dr. Kevorkian acknowledged to me that he wanted to use the tape to move forward the public debate over doctor-assisted suicide, so that it would consider the case for euthanasia.

Kevorkian said he wanted to force his own arrest for euthanasia so he could go to trial to resolve whether he was right or the prosecution was. And of course he got what he asked for: a trial, which he eventually lost.

Why do I raise all this again now? Because of the apparent irony: McVeigh and Youk, both of them wanting to die, and by the same means. But Thomas Youk’s killer did what he did out of compassion, unlike McVeigh who killed out of bitterness. As I’ve come to know more about Jack Kevorkian over the past two years, I’ve learned that the conventional wisdom about him was wrong. Fanatic? No. Zealot? Yes.

Kevorkian sits in frustration now, serving his time and playing jailhouse doctor for a few of his fellow inmates, consoled mainly by the support of old and loyal friends and by letters from admirers in many countries who believe he did the right thing.

He is fortunate now to have a devoted attorney, Mayer Morganroth, who helped shepherd him successfully through previous trials on charges of assisted suicide. Morganroth wants him out on bail now so that he can help prepare an appeal to the Michigan Court of Appeals, but he has been turned down twice by state appellate courts, with no reason given. A new hearing is scheduled for June 14 in federal court in Detroit.

Meanwhile, as I have noted, Kevorkian has not been able to talk to the press about any of this, for the Michigan Corrections Commissioner has turned down all requests from reporters who want to see him in prison. Timothy McVeigh has been allowed to make statements to reporters since his conviction. Jack Kevorkian has been silenced since his. 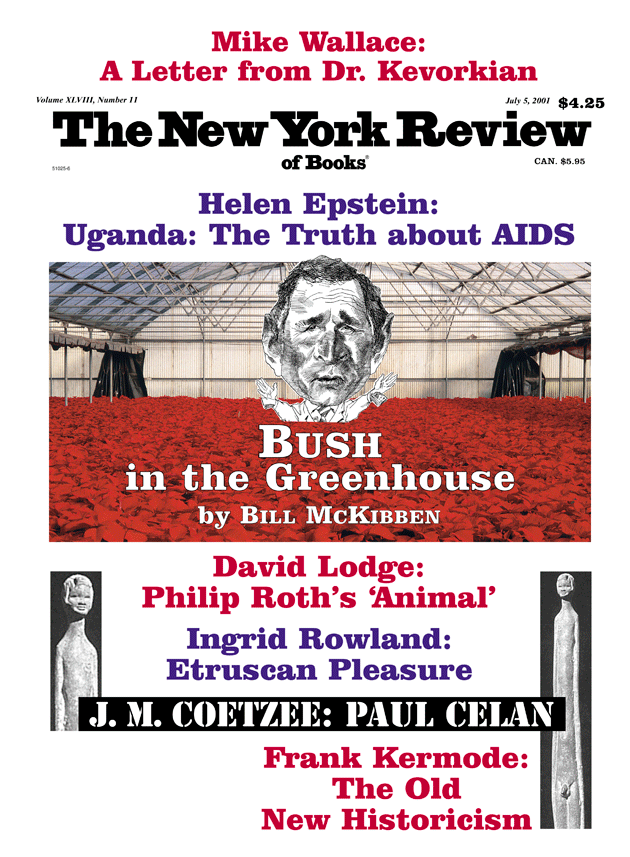