The Storm over the Israel Lobby from the June 8, 2006 issue

Michael Massing in his critique of John J. Mearsheimer and Stephen M. Walt [“The Storm over the Israel Lobby,” NYR, June 8] should have noted these authors were a bit too dismissive of the “Israel is a security asset” argument. According to that argument, Israel’s sharing of military intelligence, co-development of some weapon systems, and military aid (supplies, advisers) to other US allies entitle it to considerable US support. With respect to the last point, Mearsheimer and Walt note, but minimize, the importance of the Israel alert during September 1970 that arguably blocked a Syrian invasion of Jordan. In contrast, Yitzhak Rabin, then Israel’s ambassador to the US, reported in his service diary that the act strongly impressed President Nixon and cemented the White House’s commitment to Israel. Rabin, of course, was an interested judge of the matter, having been a key player in it. Moreover, he was no fan of AIPAC. In word and deed, he reflected an Israeli disdain for the Lobby or Shedulah—a Hebrew term with pejorative connotations of the vagaries of Diaspora existence that Zionism sought to transcend through faits accomplis. Still he might have been right.

Through the years, Israel took many other actions on behalf of the United States, sometimes clandestinely, that were too embarrassing or impossible for the United States itself, e.g., arms shipments to Iran, ordinance to South Africa during the embargo. Indeed, a database of post– World War II international conflicts compiled by the late Frank Sherman (SHERFACS) shows that in 1960–1980, Israelis filled with the same frequency, if with more limited means, the role that Cubans filled for the Soviet Union: a surrogate, especially for military training and advising in regional conflicts. Israel supporters, AIPAC included, may at times be reticent about this record for fear it undermine Israel’s “moral claims,” but its fuller airing might cause “realists” like Mearsheimer and Walt to reexamine the weight of domestic pressures versus tactical advantages that has motivated executive branch support of Israel.

They, however, are on firmer ground than Massing in emphasizing the lasting impression that Senator Charles Percy’s loss in 1984 made on Capitol Hill. It still reverberated in 1990, when I and other Jewish doves lobbied legislators to support a Sense of Congress resolution. The resolution called on Israel to reopen the Palestinian universities that it had recently closed in response to the (first) intifadah. Among the offices I stopped at was that of Joseph Kennedy, then my own representative. I did hesitantly recall that a Palestinian had taken the life of his father. Kennedy was not in, so I explained my purpose to his legislative aide for foreign affairs. She immediately responded: “We can’t support that.” When I asked why, she said: “Because of Chuck Percy and the Lobby.”

I found that ironic. My own father, a Zionist leader in Chicago, had organized the significant Jewish support that helped elect Percy to the Senate in 1966, because Israeli officials told him the incumbent was too sympathetic to Palestinians. In 1984, my father worked again to defeat the incumbent—this time Percy himself—for the same reason. I spoke of the irony to Kennedy’s legislative aide and added, “At least you taught me the meaning of the Bible’s saying: ‘The sins of the fathers are visited upon the children.'” We both laughed at my remark. Then she said, “We still can’t support the resolution.”

As I noted in my article, Mearsheimer and Walt argue that whatever strategic value Israel may have had for the United States during the cold war, that value has long since faded. All of Mr. Hurwitz’s examples come from before 1980. No doubt Israel continues to provide strategic benefits to the United States, but these must be weighed against the obvious costs that America’s unflinching support for Israel has had on its image and prestige in the world. As for Charles Percy, I did not write that his defeat made no lasting impression; rather, I faulted Mearsheimer and Walt for providing no convincing evidence to that effect. In my article, I discussed at length the success that AIPAC and its supporters have had in using money and lobbying to tilt the outcome of congressional elections in their favor. 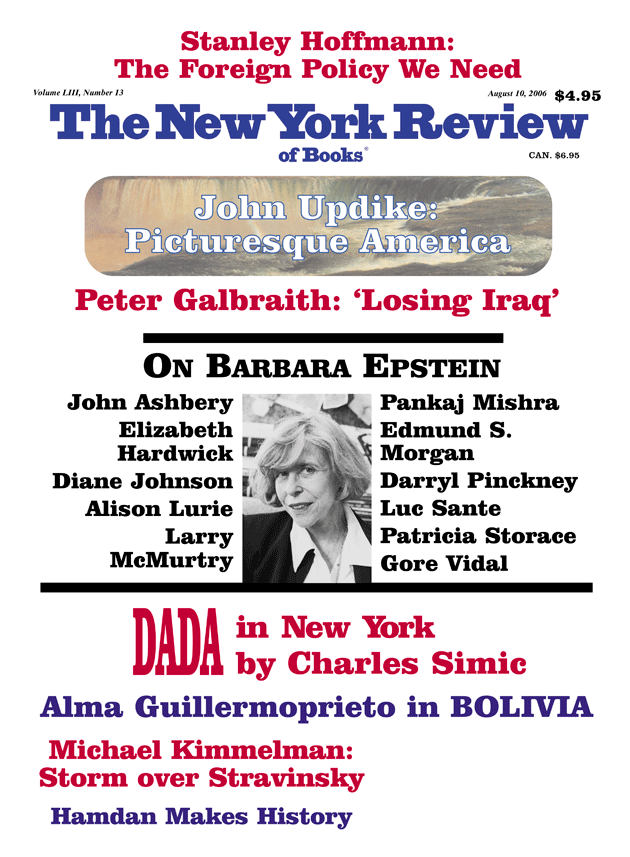