By its nature, dance poses unique challenges for scholars. There’s no universal notation system, and the various ways we have to document it are incomplete and unreliable. Dances are taught from one practitioner to the next. Choreographers speak of making a dance “on” a ballerina; the form is ephemeral, embodied in the dancers themselves. “Memory is central to the art,” Jennifer Homans writes in her history of ballet, Apollo’s Angels, “and dancers are trained, as the ballerina Natalia Makarova once put it, to ‘eat’ dances—to ingest them and make them part of who they are. These are physical memories; when dancers know a dance, they know it in their muscles and bones.” There is no full way to capture the presence of dance except through dance itself. This tension—between dance and the representation of dance—is always at the heart of dance; dancers feel it, too, and so do the people who watch dance and the people who write about it.

The recent exhibition “Hymn to Apollo: The Ancient World and the Ballets Russes” at NYU’s Institute for the Study of the Ancient World reminded me how intriguing this tension is. The show—beautifully curated by Clare Fitzgerald and Rachel Herschman, and accompanied by an illustrated catalog that includes essays by Herschman and others on the study of ancient dance and the Ballets Russes—explored the influence of ancient Greek, Roman, and Egyptian representations of dance on a group of groundbreaking Modernist artists based in Paris. In the rooms of the ISAW on East 84th Street, Fitzgerald and Herschman gathered ninety-five artifacts, interspersing statuettes, libation bowls, and amphoras from classical times with costumes, set designs, photographs, and other archival material from the Ballets Russes.

The Ballets Russes was formed in Paris in 1909 by the Russian impresario Sergei Diaghilev, and included the choreographer Michel Fokine, the dancer Vaslav Nijinsky, and the painter Léon Bakst, who became the company’s stage designer. Intent on fulfilling the Wagnerian notion of Gesamtkunstwerk—a “total work of art” in which art, music, and drama would coexist on equal terms—Diaghilev engaged extraordinary artists across many disciplines. He worked with the dancers Anna Pavlova, Tamara Karsavina, and Ida Rubinstein, the composers Claude Debussy and Igor Stravinsky, the fashion designer Coco Chanel, and the painters Sonia Delaunay, Robert Delaunay, Giorgio de Chirico, and Pablo Picasso. The company traveled and performed in various configurations throughout Europe and the Americas until Diaghilev’s death in 1929. (For the story of what happened after, look to the 2005 documentary film Ballets Russes, directed by Danya Goldfine and Dan Geller.) 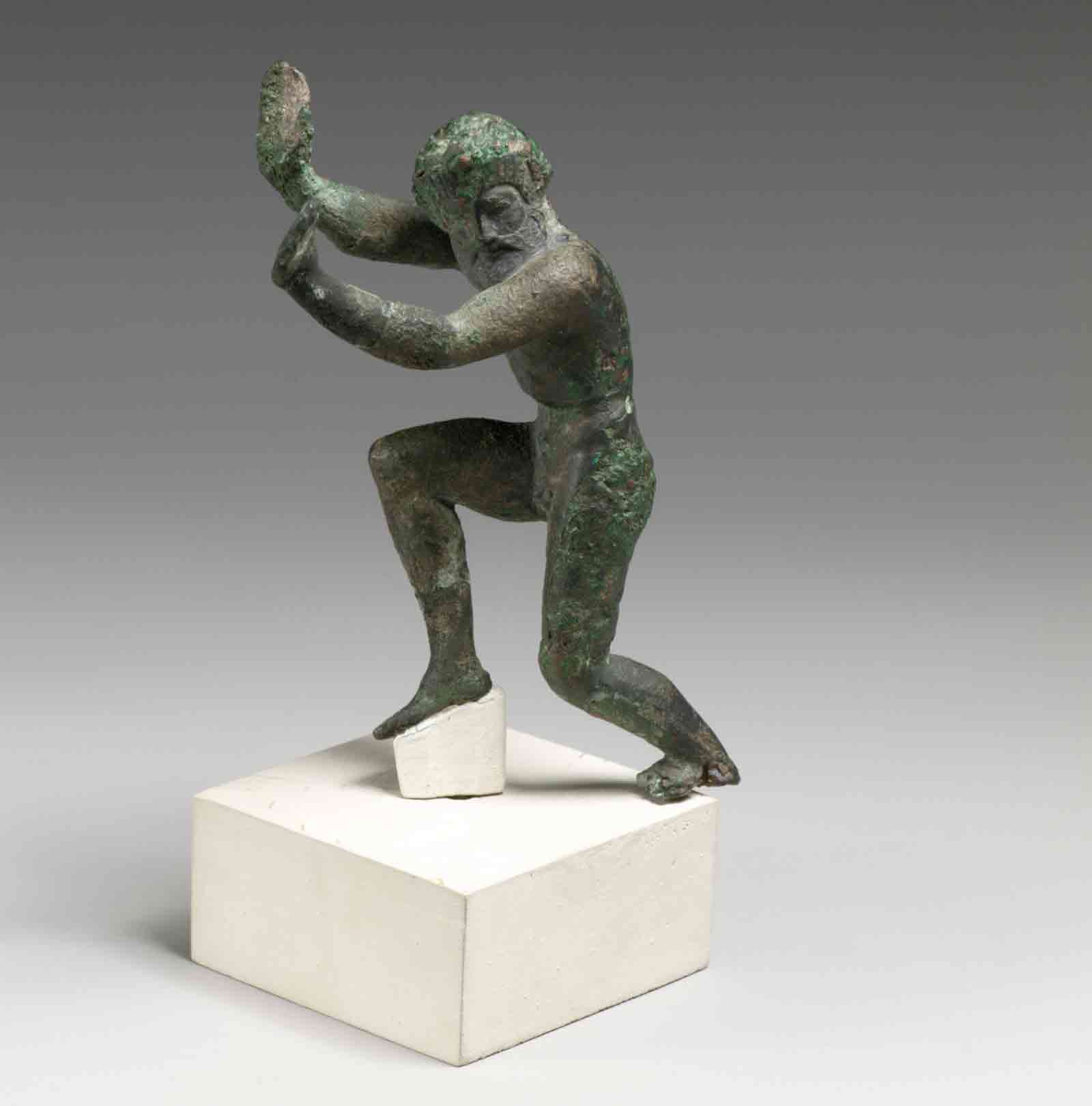 Statuette of a dancing satyr, Etruscan, Classical, circa 450–400 BCE 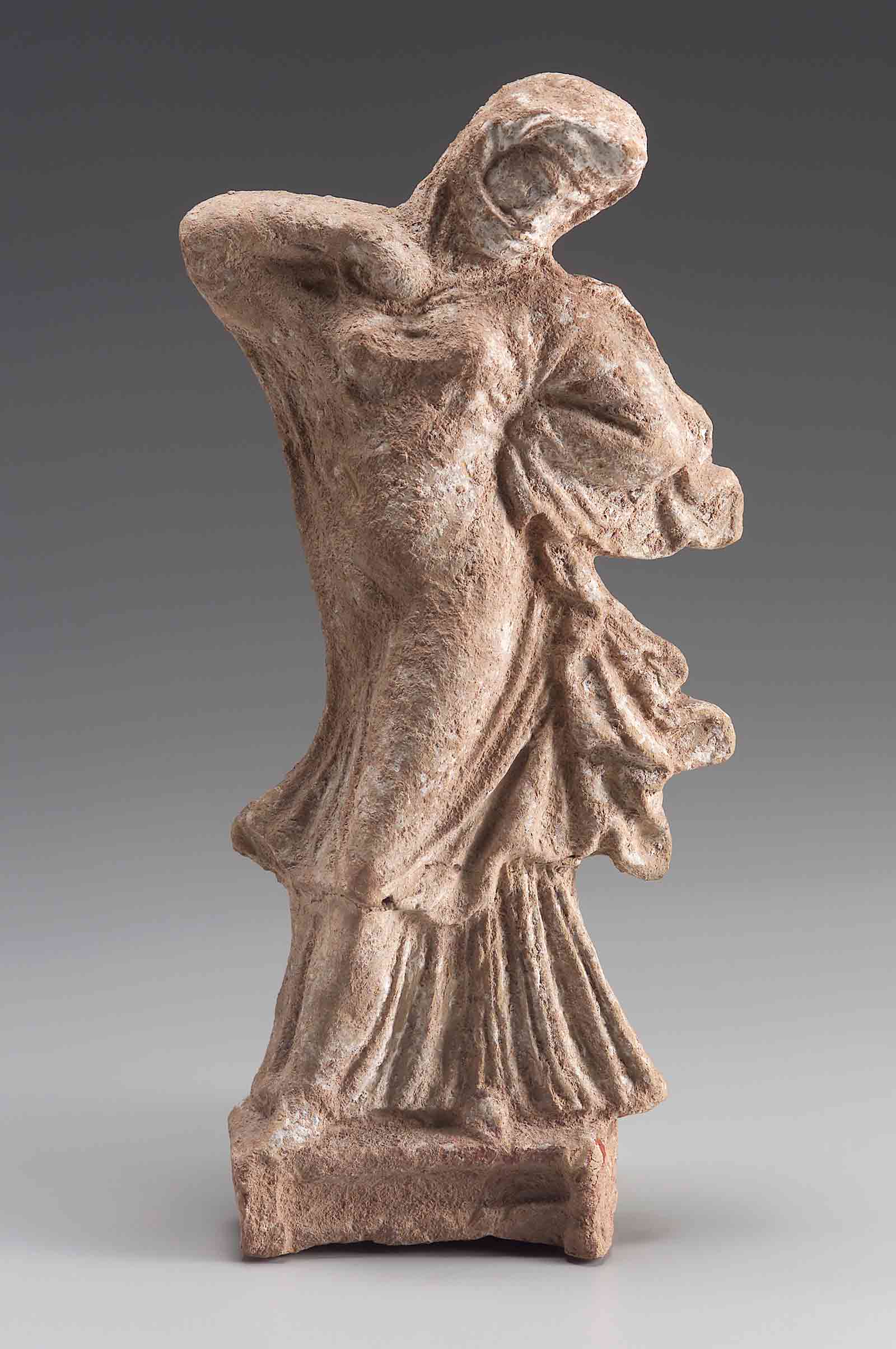 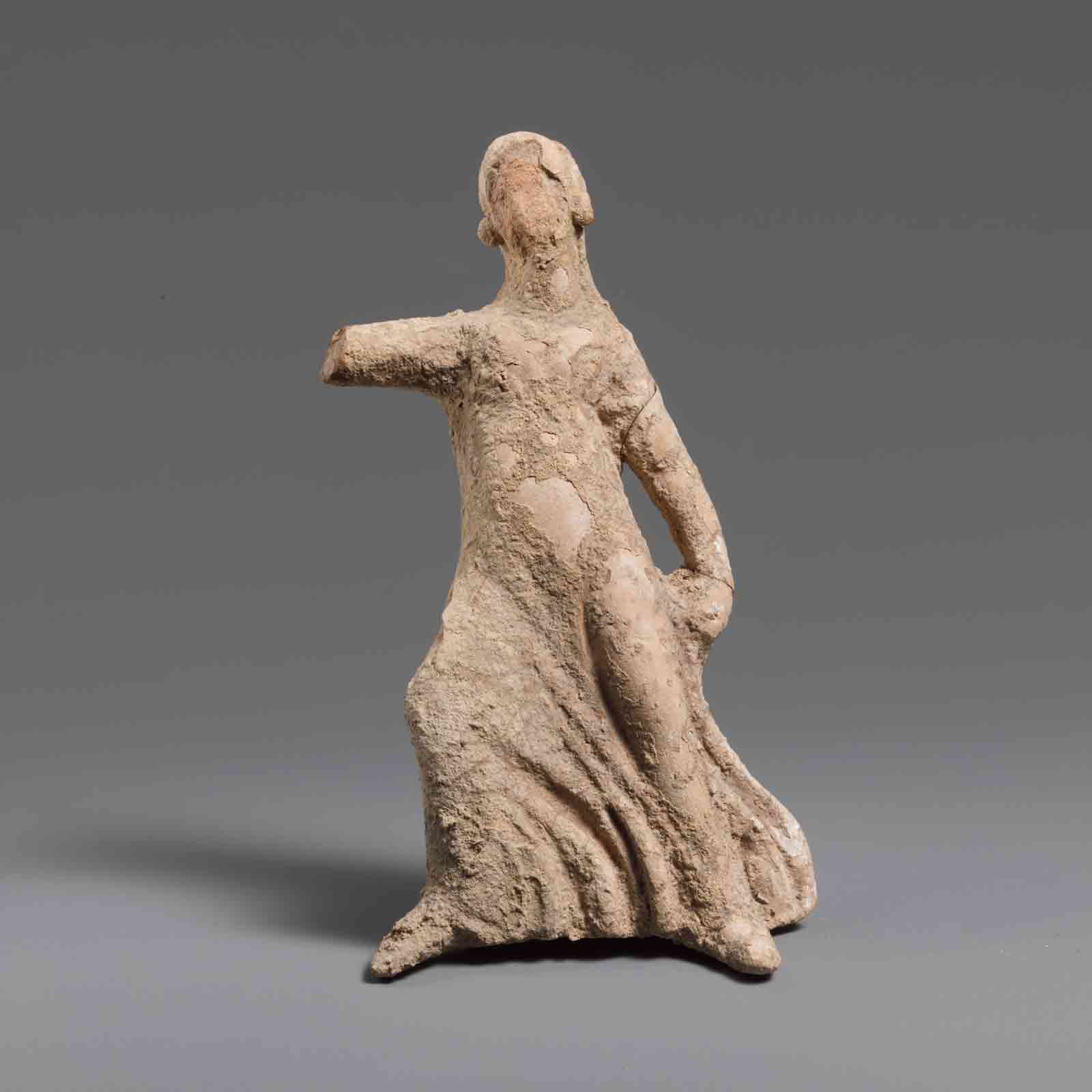 Statuette of a girl dancing, Hellenistic, circa 300–200 BCE 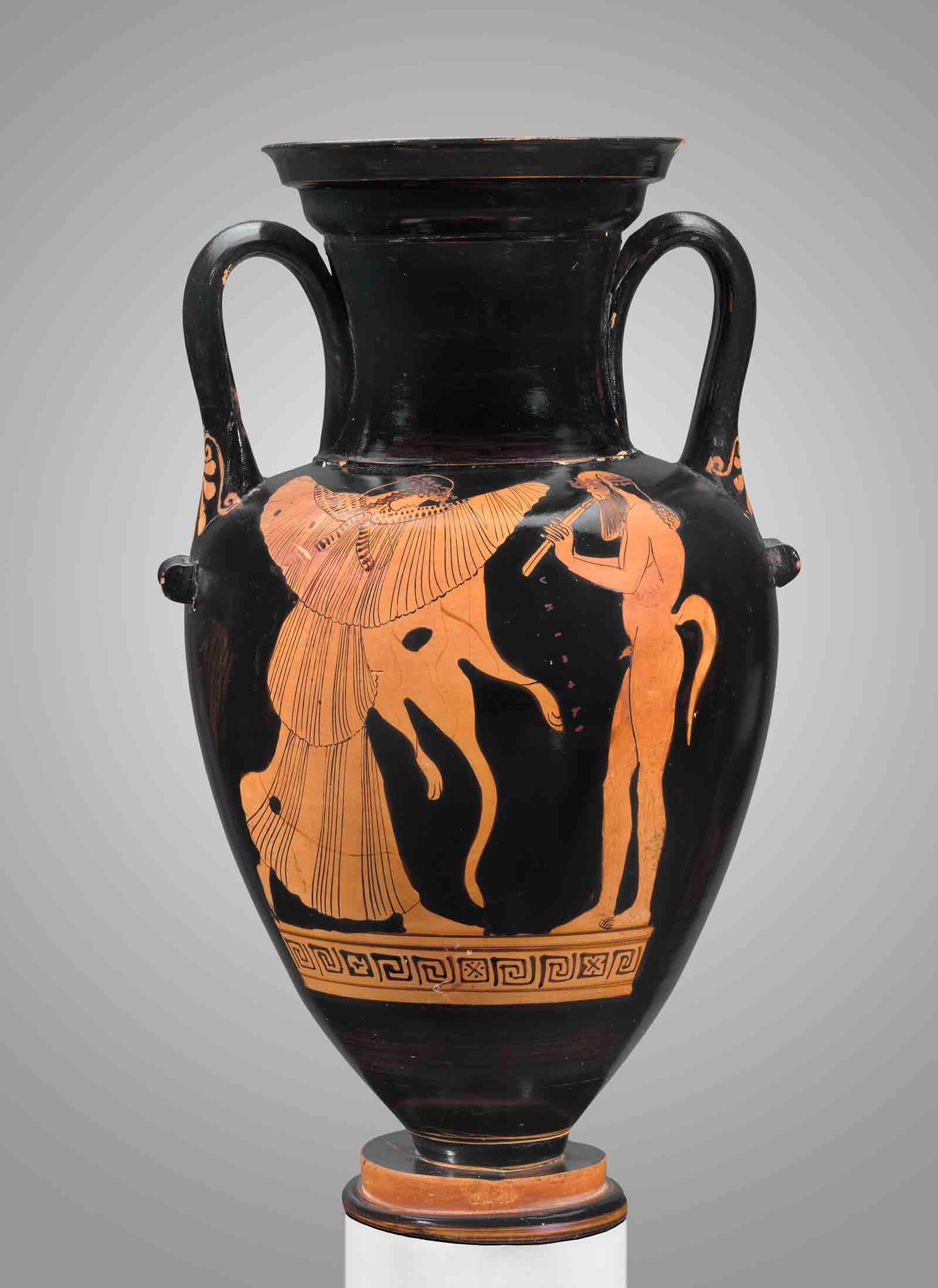 Two-Handled Amphora, attributed to The Briseis Painter , depicting a maenad and a flute-playing satyr, and a satyr dancing with krotala (wooden clappers), circa 470 BCE

From its inception, the Ballets Russes was the most successful and inventive dance company of the early twentieth century. Bronislava Nijinska, Nijinsky’s sister and a dancer and choreographer in her own right, described its “triumphant” reception on opening night on May 19, 1909. “We felt,” she said, “the spectators had witnessed the birth of ‘a living art’: the creation of the Ballets Russes. For we artists had ourselves experienced something great being born in us.” It was here that Tamara Karsavina danced The Firebird for the first time and Nijinsky executed the astonishing leaps in which he “soared away from earth into the realms of space.”

As Modernists, the artists of the Ballets Russes wanted to reinvent the old forms and forge a new classicism. They sought something both pure and radical: not the conventional, confining manner of ballet danced the French way, but a style of dance they thought was both more liberating and more natural. For inspiration, they—like so many artists of the time—looked to other cultures: to folk art and folk tales from Russia and elsewhere, to Primitivism, African sculpture, and art of the Orient. And they turned to ancient Greece—not the neoclassical version of Ingres and David, which was already part of nineteenth-century ballet, but directly to the recently discovered antiquities dating from between the mid-eighth and early fifth centuries BCE.

At the time, archaeology was a relatively new, and newsworthy, pursuit. Extraordinary discoveries were being made, such as Sir Arthur Evans’s exhumations of the Minoan palaces on Crete and Heinrich Schliemann’s excavations in Greece. We tend to forget how powerful these discoveries could be. On a visit to an archaeological museum in Olympia, during an extended trip through Greece in 1907, Leon Bakst’s response was so visceral that he decided to scale the pediment of a ruined temple because, he said, “I want terribly to run my hand over the marble, to find out what Niobe’s shoulders are like, what her breasts are like.” You can still feel that desire in Bakst’s work, which made up a large portion of this exhibition. It’s apparent in the sets and costumes he designed for numerous ballets, among them Narcisse (1911), Daphnis et Chloé (1912), and L’Après-midi d’un faune (1912). Among the highlights on display: a gorgeous silk tunic in sunflower yellow with a checkered blue and white belt, a costume for a nymph from Narcisse.

The mother of modern dance, Isadora Duncan, was, of course, also inspired by notions of antiquity. To her, ancient Greek culture represented an ideal past in which men and women lived in harmony with nature and divinity. She studied the figures on vases and bas-reliefs not to replicate them but to absorb what she considered their timeless essence. She was famous for appearing on stage in bare feet, draped in diaphanous clothing, running, jumping, and skipping, all instinct and impulse. Her performances in St. Petersburg in late 1904 and early 1905, and again in 1907 and 1909, dealt the Russian ballet world, in Diaghilev’s words, “a shock from which it could never recover.” The exhibition included a striking gelatin silver print by Edward Steichen, who photographed her at the Parthenon in 1921. In a way, it captures her relationship to Ancient Greece. Massive columns, sky, and slabs of huge stone fill the frame. In the bottom left-hand corner, looking tiny and earthbound, Isadora Duncan stands facing the sun, the horizon visible just behind her. Bakst made several sketches of her, but according to the catalog, he felt some ambivalence about at least one of her performances, writing to a friend, “It’s good, if you like, because it’s new and, one could say, pregnant with the future… She herself, however, is more like an inebriated, crazy Amazon.”

Which brings us to another theme highlighted in the exhibition: the age-old dichotomy of Apollo and Dionysus, expressed in the tension between the Apollonian qualities of order, balance, and harmony and Dionysian impulses that are wild, ecstatic, and animalistic. For instance, a classical 470–450 BCE terracotta and red-figure amphora depicts, on one side, Apollo and his twin sister Artemis, personifying balance, dignity, and grace. On the other side, a leopard-skin-wearing, snake-bearing Dionysus keeps company with a Maenad, which in ancient Greek means a “raving one.”

In 1912, Diaghilev gave his protégé and sometime lover Nijinsky the opportunity to choreograph a ballet while the overworked Michel Fokine was on vacation. Nijinsky devised a ballet of sexual awakening, L’Après-midi d’un faune, based on the poem of that name by Stéphane Mallarmé and set to music by Claude Debussy. Nijinsky, the story goes, was supposed to meet Bakst in the Greek galleries at the Louvre but got distracted by the Egyptian reliefs. Perhaps that helps us understand why his choreography alternates angular, precise, and dramatic movements with flat, sculptural poses. It suggests an antique frieze coming to life, or even the herky-jerky of early film. Everything about the ballet—the faun’s skin-tight costume, his animal sexuality, his strange steps, and especially his culminating sexual gesture—was shocking and new to audiences.

Nijinsky’s career was brief. By 1913 he’d been dismissed from the Ballets Russes; by 1919 he was diagnosed with schizophrenia and spent the rest of his life in and out of mental institutions. He choreographed only four ballets, and of those, only L’Après-midi still survives. The ballet was documented in a series of platinum prints from 1912 by Adolf de Meyer, a frequent photographer of the Ballet Russes; in these images you can see the hieroglyphic quality of the dancers’ poses. You can also see Bakst’s scenery, which he had painted to resemble a mythical, antique landscape (Meyer reworked the negatives to make the background appear even more ethereal). Nijinsky’s handwritten choreography notes, scratched in graphite, also survive and were on display. 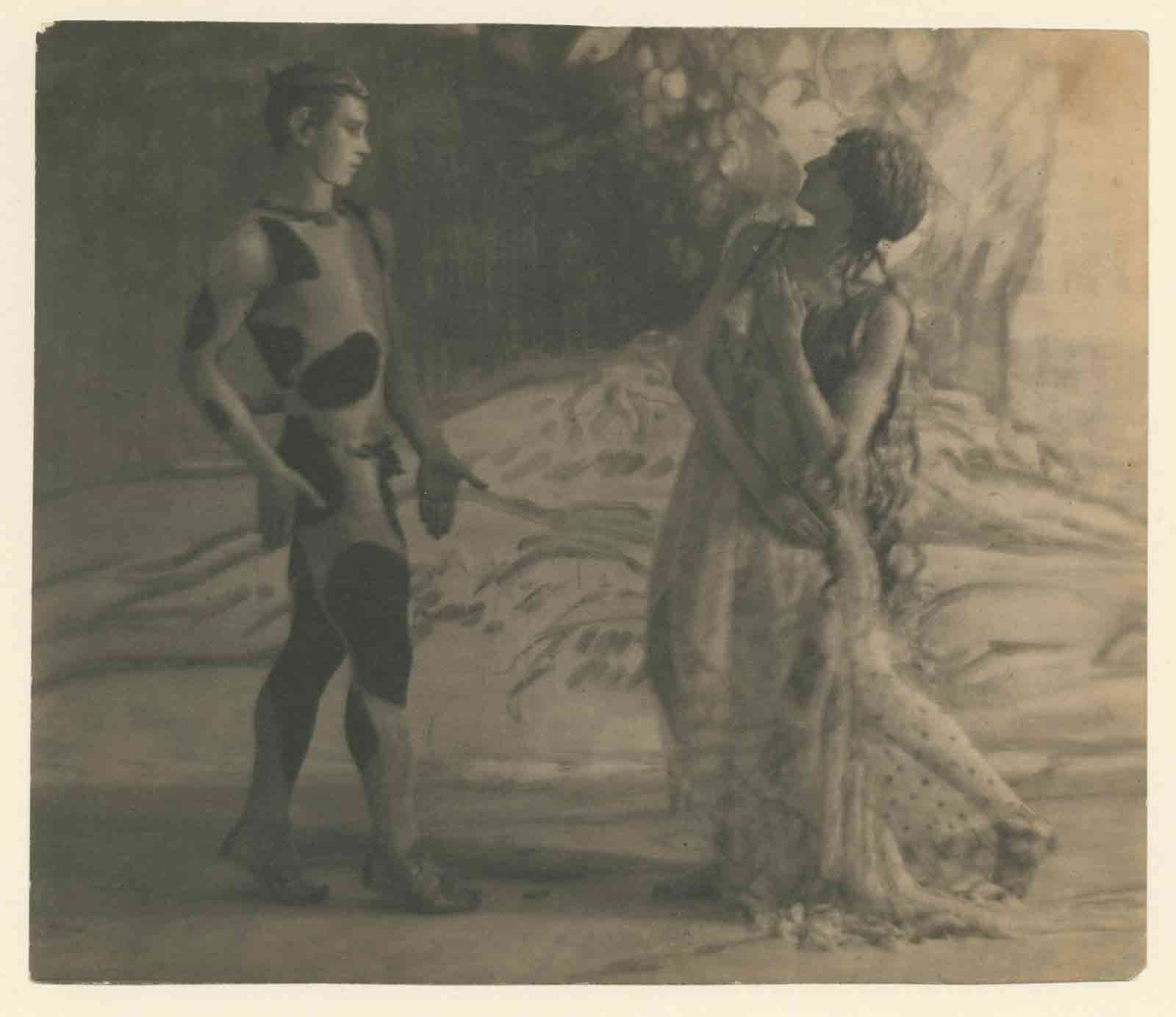 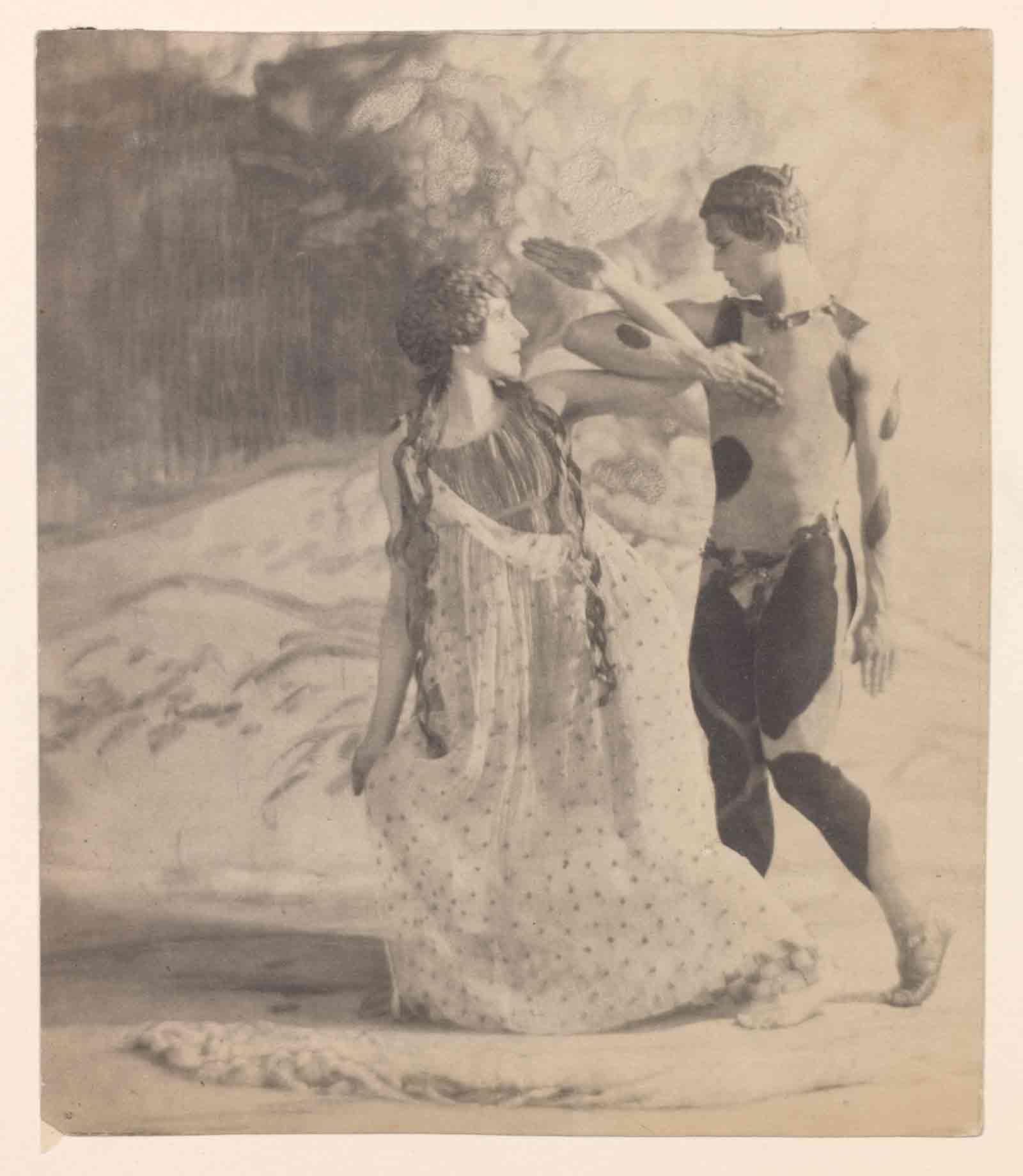 Somehow the exhibition managed to both freeze and collapse time. It reminded me that humans have forever sought to memorialize dance, and that, no matter how marvelous the objects they create, the project is still characterized by a stilted, poignant grace. Outside, on East 84th Street, I found myself thinking about an eleven-minute video that was part of the exhibition, a 1990 performance of L’Après-midi, which you can watch on YouTube. The faun is danced by Charles Jude, a French-Vietnamese dancer then at the Paris Opera Ballet. He wears a costume identical to the one in Meyer’s photographs, his hair is curled into the same horns; the set was recreated to replicate the one painted by Bakst. Jude learned the dance from his teacher, Rudolf Nureyev, who had learned it from another dancer before him. I envisioned a line of bodies stretching back to Nijinsky, and beyond, all the way back to antiquity.

“Hymn to Apollo: The Ancient World and the Ballet Russes” was on view at NYU’s Institute for the Study of the Ancient World through June 2. The accompanying catalog, by the same title, is published by Princeton University Press.

Alexandra Enders is the author of Bride Island. She’s at work on a novel about dancers. (July 2019)

The Ecstasy of a Modern Romantic

A Ballerina, Inside Out

“Doctor, I want my hip bone.” Doctor Padgett did a double take. “I want my bone, you know, what you’ll be taking out.”