At the end of World War II, as it became clear that Hitler was headed for defeat, Russia and the Western powers raced against each other to claim territory in Europe. Russian troops were the first to reach Warsaw, Budapest, and Vienna, and most observers expected that the Russians would also be the first to reach Prague, the capital of Czechoslovakia. It looked as if all of Eastern Europe was fated to fall under Soviet sway. At the last minute, however, it almost didn’t turn out that way.

Igor Lukes tells the story in a chapter of his recent history, On the Edge of the Cold War. At the end of April in 1945, America’s Third Army, under the command of General George Patton, secured the western border of Czechoslovakia, and once American troops entered Czechoslovakia, they discovered that German forces there had become so demoralized that it would have been easy for the Americans to continue their advance. General Dwight D. Eisenhower authorized Patton to take Karlovy Vary, Plzeň, and České Budějovice, three of Czechoslovakia’s westernmost cities. Patton quickly took the cities, and he wanted to keep marching—all the way to Prague. After all, the capital was still under German control; in fact, the SS were committing atrocities there. At that point, Russian forces were two hundred miles away from it, and the Americans, only fifty.

If Eisenhower had given Patton a green light, the Iron Curtain of the next half-century would very likely have had a very different shape. Alas, Eisenhower ran the idea past Moscow before proceeding, and the authorities in Moscow, unsurprisingly, signaled that they didn’t like it. During the few days that Eisenhower hesitated, the Russians liberated Prague. Several years later, in 1948, Czechoslovakia embraced a Communist regime, which soon became a totalitarian one.

Under that regime, America’s liberation of Karlovy Vary, Plzeň, and České Budějovice became an inconvenient fact. When I visited the country in 1990 and 1991 (the Communist regime had at last fallen in 1989), I was told that the fact had been suppressed from school textbooks and erased from official histories. When shuffling off a totalitarian regime, there’s an exciting opportunity to acknowledge inconvenient facts for the first time, and in early May 1991, the city of Plzeň decided to celebrate publicly its liberation from Nazi forces by American troops—forty-six years post hoc.

I attended. (To be clear: my recently published novel, Necessary Errors, is fiction, but the episode I’m describing in this post is fact.) I no longer remember how I heard about the celebration, but after I did, I telephoned a pair of Czech twins who lived in Plzeň, whom I had met the previous summer, and asked if their family could host me and a couple of friends for the weekend.

Upon arriving in Plzeň, my friends and I found the flags of Czechoslovakia and the United States draped from the church in the town square, and a red, white, and blue wooden stage set up underneath, which displayed stripes, stars, and the motto “Liberty for All” along with the translation “Svobodu Všem.” A number of American veterans of the campaign were seated on stage, some wearing white trucker’s caps that identified them as former members of the 16th Armored Division.

The audience, too, was impressive. In the absence of a formal academic acknowledgement of the truth, history had been preserved in the country, after a fashion, by amateur re-enactors. That weekend, there converged on Plzeň a metaphorical army of teenagers and college-age youth dressed in period military uniforms and driving vintage Russian tanks and American jeeps. They and their vehicles soon filled the square. There was even a stroller in camouflage. Miniature Statues of Liberty were for sale, as were calendars for the year 1991 with the title “Thank You Boys” and photos of the 1945 liberation. 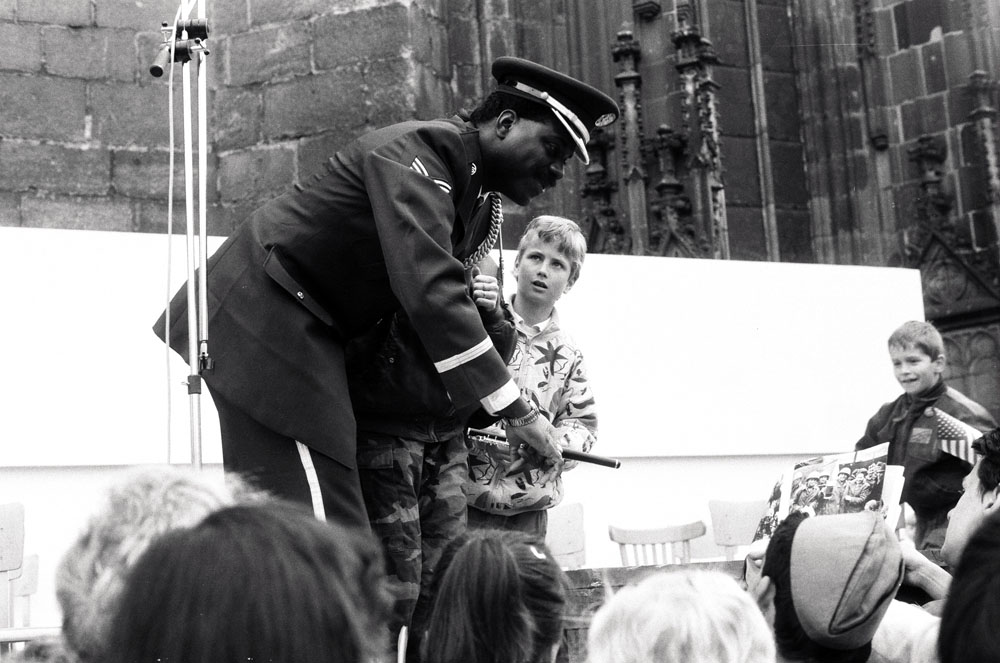 I don’t recall the ceremony itself all that clearly. I imagine that it was pompous and a little dull the way that all civic rituals are. I remember that Václav Havel, the president of Czechoslovakia, did not attend, and that Shirley Temple Black, the American ambassador, did. In fact, I seem to recall that Black’s speech was a bit goofy and that she made reference in it to looking on the sunny side of life—quoting the song that she had made famous as a child actor—but I don’t fully trust my memory of the detail. In the snapshots that I took, I can see a Czech military band; an American one, which I suspect must have played jazz; a Czech girls’ choir; and a line of young Czech women dancing in what seem to have been sailor’s uniforms with skirts. I’m also pretty sure that I can spot the Czech politicians Václav Klaus and Karel Schwarzenberg, but my negatives are grainy. 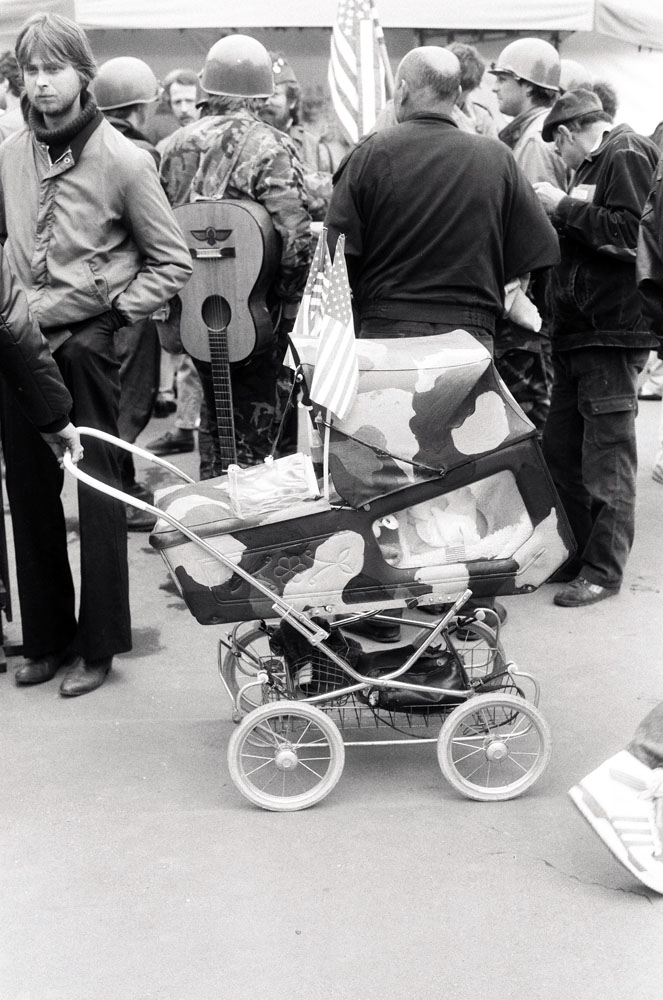 It was giddy-making to be in a crowd of foreigners expressing gratitude, even unto kitsch excess, for something the United States had done decades earlier—not an experience I’m likely to have again any time soon. That evening, when we reached the home of the my friends the twins, there was a further twist. It transpired that one of the American soldiers who had come to Plzeň on May 6, 1945, had fallen in love with the twins’ grandmother and nearly proposed to her. Or maybe he did propose and she turned him down—I can’t be certain of my memory any more. In any case, the family had preserved the man’s photo in the family album, which the twins now showed off to us. A memory of him—and of the American heritage they might have had—had become part of the family lore.

Caleb Crain’s novel, Necessary Errors, is published by Penguin, and was reviewed in the August 15, 2013 issue of the New York Review.

Blood in the Sky

Blood in the Sky

Caleb Crain is the author of the novel Necessary Errors and the ­critical study American Sympathy. His second novel, Overthrow, will be published in August.  (June 2019)