With his imposing paunch, outsized neckties, and pompadour as pointy as Woody Woodpecker’s beak, Donald Trump has the most recognizable profile of any American president since Richard Nixon. Yet, as a cartoonist of my acquaintance has complained, artists are having a hard time caricaturing Trump, mostly likely because he already is a caricature—one reflected in mass culture’s fun-house mirror for close to forty years.

We’re sick of Trump and we’re sick of being sick of him. Well-populated by images of the president, Peter Saul’s new show “Fake News,” at Mary Boone Gallery through October 28, is hardly a palliative, but it does illustrate the crass absurdity of the current moment.

Saul, now eighty-three, has been categorized as a political pop artist and a proto-punk neo-surrealist, although he has as much in common with the grotesque Mad magazine cartoonist Basil Wolverton as with any American painters. He’s done Nixon and Reagan (both as governor and president) as well as George W. With candy colors placed in the service of gross physical distortion and blandly offensive savagery—crucifixions are common, the electric chair is a frequent prop—his unnaturally festive work would scarcely seem out of place on the wall of a Venice Beach tattoo emporium. “Not to be shocking means to agree to be furniture,” he once said. Still, Saul’s portraits of Trump are relatively naturalistic—though the impossible settings in which the president is placed are not. 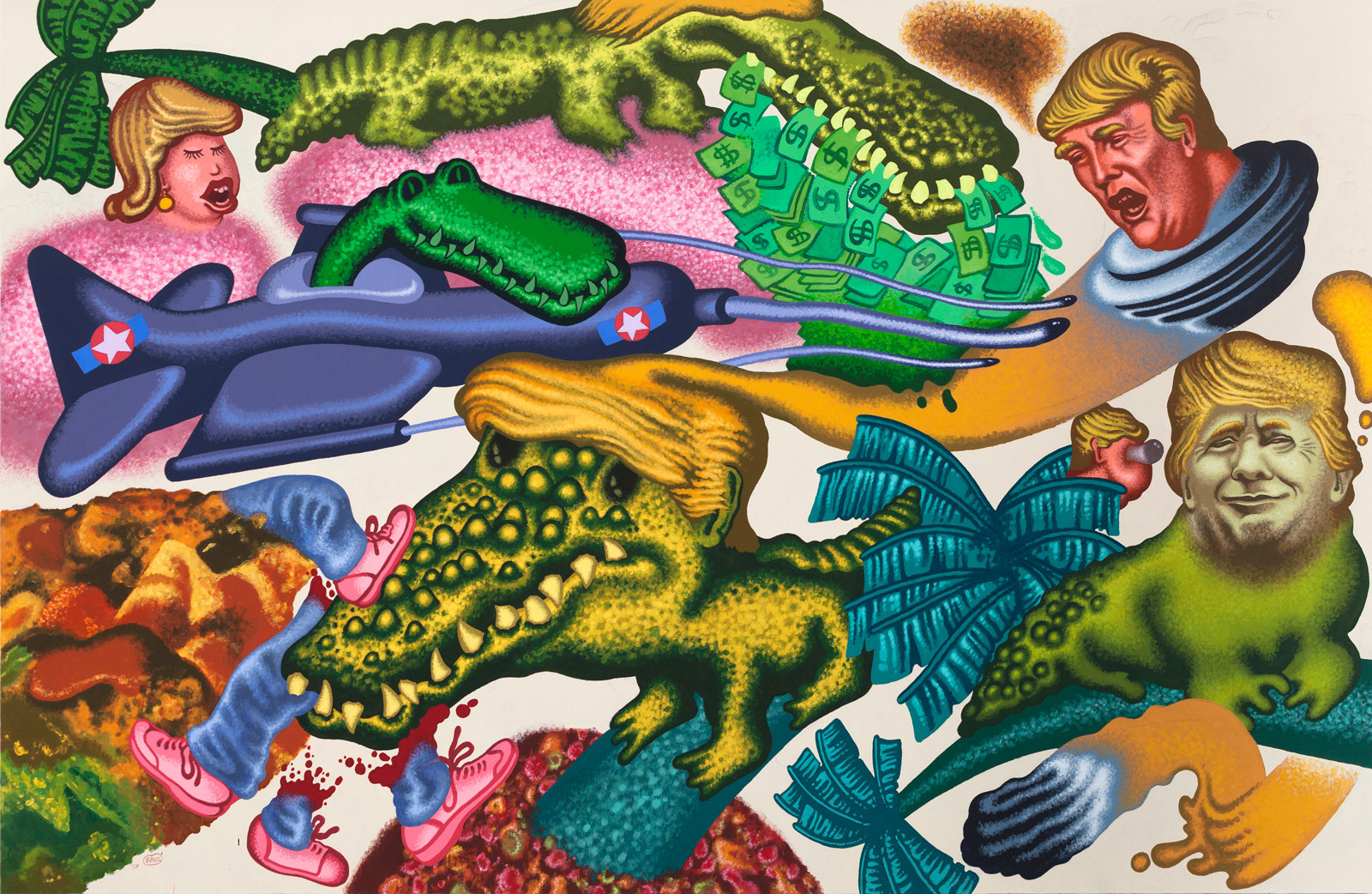 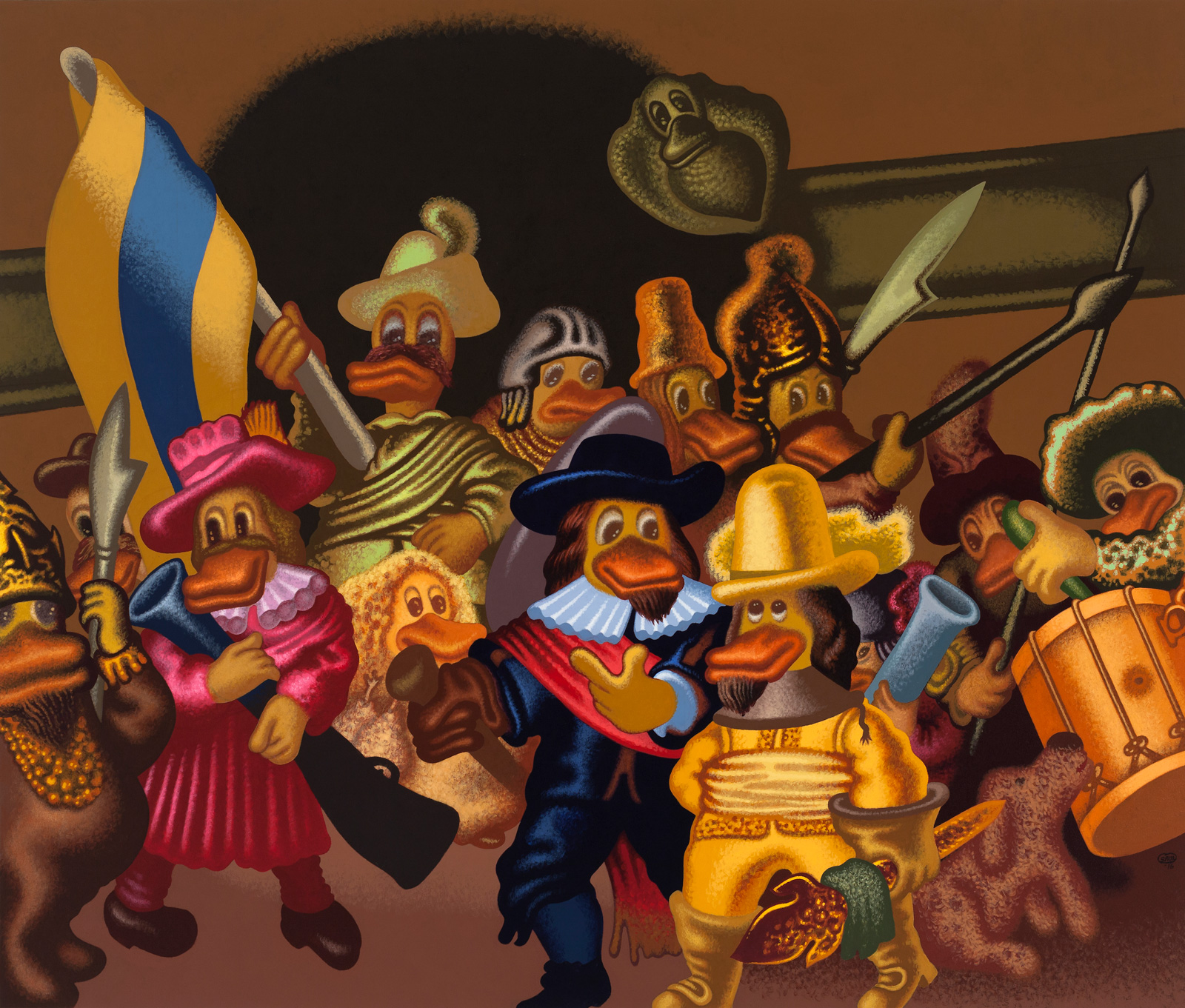 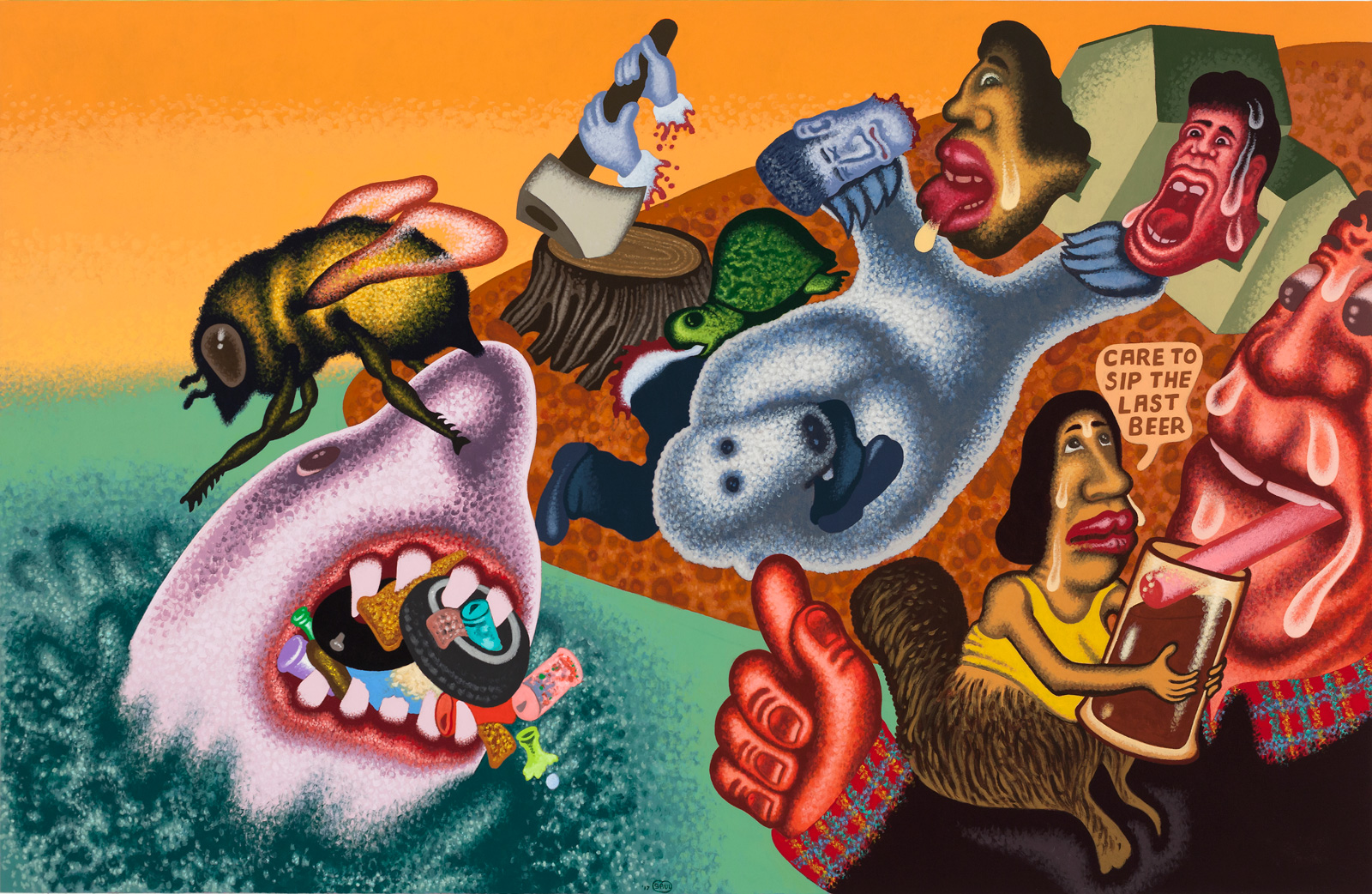 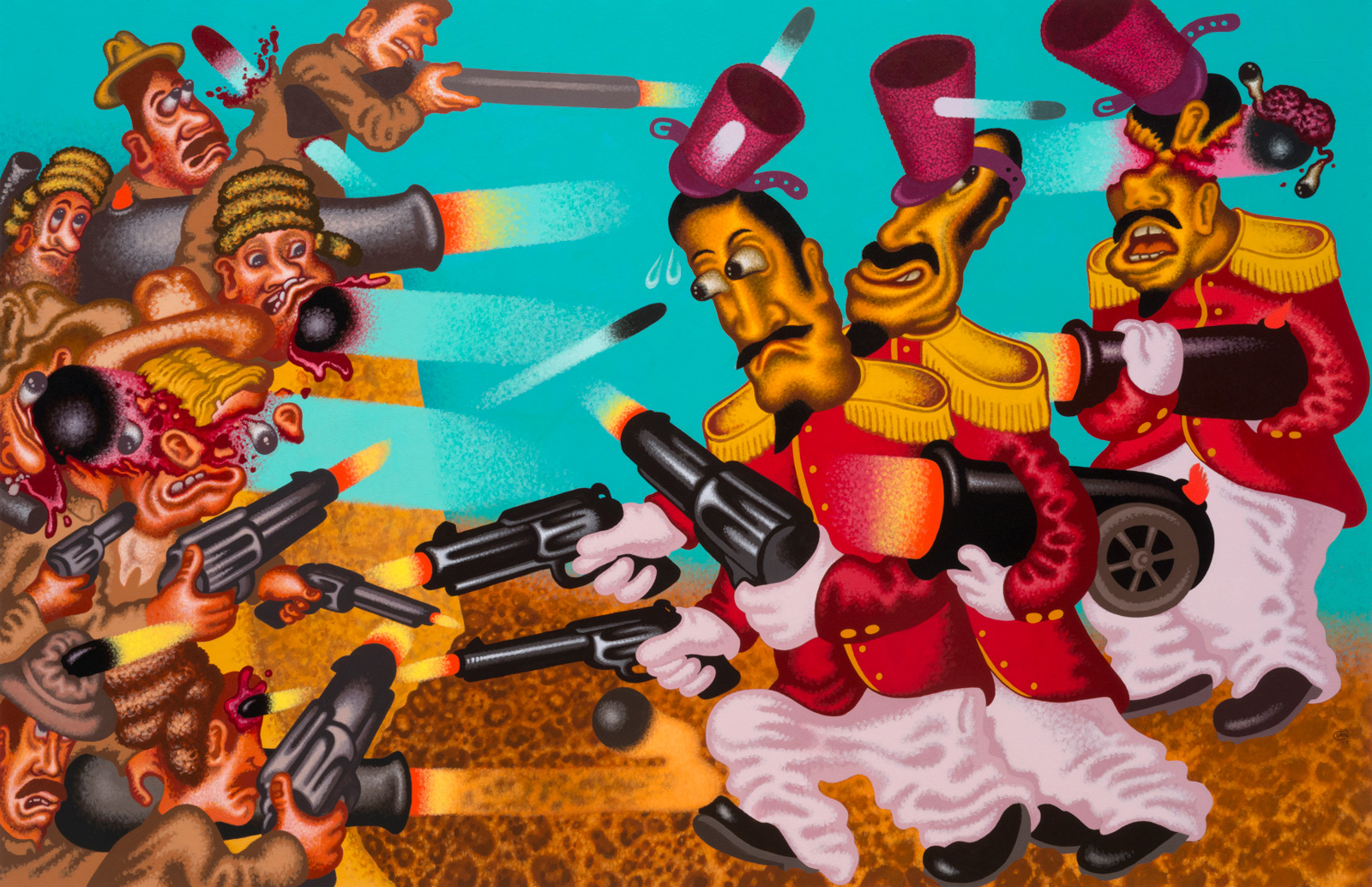 Trump appears three times in the canvas Quack-Quack, Trump. He’s socked in the jaw by a giant cheeseburger and gawked at by a one-eyed space monster piloting a flying thumb. Another, larger Trump is surrounded by a plague of little cartoon ducks (a staple of Saul’s iconography). Some have roosted in Trump’s pompadour; he appears grumpy and blindly shoots at them with a ray gun in each hand. A third, scowling Trump emerges from a charcoal whirlwind amid a cloud of blue dollar bills.

The Trump coiffure has a life of its own in Donald Trump in Florida, crowning two of the pustular bile-green crocodiles that dominate the painting, as well as a matronly lady whose head demurely emerges from a pink cloud. Trump, looking weirdly self-satisfied, is half-reptile, perched on an inverted palm tree and oblivious to the crocodile aircraft headed his way even as one more Trump stares past the bills slobbering out of another croc’s mouth.

In short, the president is one more character in Saul’s ongoing carnival of desecration. To see these paintings is to recognize Saul as something of an American Scene painter. (Some of his 1960s paintings mock Thomas Hart Benton.) Accordingly, Saul easily integrates Trump into his world—could the reverse ever be possible? “Fake News” includes two of the Old and New Master parodies that Saul has been painting since he travestied Guernica and De Kooning in the early 1970s. Rembrandt’s The Night Watch is reimagined with ducks; the subject of the mock-Gainsborough Blue Boy with Ice Cream Cone is greedily fixated on an outsized swirl of orange glop that has an unmistakable resemblance to the Trump pompadour.

Trump famously refused to buy the silkscreened Trump Tower photographs that Andy Warhol created on spec for the building’s atrium in 1981. By Warhol’s account, Trump deemed them insufficiently gaudy—black, grey, and silver, rather than orange and pink (and gold?). But Saul’s “Fake News” paintings, especially the cheerful, inane pomposity of Nightwatch II, the gaily florid detritus of Global Warming, the Last Beer—so tropical and lively with its surfacing shark and coral-colored sky—and the scurrilous stooge-like, ultra-violent battle between American frontiersmen and Mexican regulars depicted in yummy fuchsia and ochre in Return to the Alamo 78, might make a lot of sense installed poolside at Mar-a-Lago or hung in the lobby of the Trump International Hotel in Washington, D.C.

Trump is so tasteless that Peter Saul is, by comparison, tasteful. “Fake News” is something of a misnomer for this show. It should really have been called “The New Normal.”

Peter Saul’s “Fake News” is at the Mary Boone Gallery through October 28.

Donald Trump’s signature hairdo is so prominent that cartoonists use it as a shorthand identifier in their drawings. But what does it say about the man?