The majority of the world’s museums are currently shuttered indefinitely due to the Covid-19 pandemic. What is there to say about an art exhibition that is closed to the public? We can wrestle theoretically with whether art requires a physical viewer to be fully realized, but there is nothing abstract about art going unseen that is still resolutely there: just as carefully preserved, hung with the same meticulous precision, thoughtfully interpreted by unread wall text, and in the dark, behind locked doors.

And yet, “Painting Edo,” the ambitious jewel of an exhibition currently on view for no one at the Harvard Art Museum, is perhaps arguably experiencing its most historically authentic moment in the strangeness of ours. Because to fully understand the significance of the Edo Period in Japan, which lasted from around 1600 to 1868, is to place yourself in a country that flourished even as it was closed off to the rest of the world. Japan was famously isolated during this period, save for some Dutch trade, and the most enduring legacy of this seclusion is a diverse and elegant body of art that evolved as a result of this fervid inward gaze. Edo—named for the capital city of Edo (now Tokyo), which was, by 1800, the largest city in the world—was both a place and a time, as the exhibition’s co-curator, Rachel Saunders, says. Japan’s early modern period of urbanization and intellectual cultivation was a period of relative peace and prosperity, which led, in turn, to the rich and vibrant art world that illustrated a culture’s song of itself.

You will have seen art from the Edo Period—its most recognizable images are the ukiyo-e prints: mass-produced woodblock scenes of popular entertainment and Japanese landscapes, the most world-famous of which is Katsushika Hokusai’s The Great Wave off Kanagawa from 1829. These prints were ubiquitous, disseminated through the city’s pleasure quarters, and sold, it’s colloquially said, as cheaply as a second helping of noodles. And before Edo Japan opened up to the world and these inexpensive prints were splashed all over Europe, they were bought almost exclusively as souvenirs by a growing Japanese middle class, a pictorial keepsake of insular pride. The Great Wave is itself an amalgam of some of Japan’s most distinctive characteristics, illustrating its relationship with the spiritual anchor of Mount Fuji, and with the sea itself, which is embodied in both the quotidian economics of the fishing industry, and in the Buddhist philosophy of a wave’s impermanence.

Yet these small-scale, delicate, disposable prints comprise only a fraction of the art from the period and what is on offer at “Painting Edo,” which speaks to the scale and scope of this exhibition. It is the largest special exhibition ever mounted at the Harvard Art Museum, and the one hundred and twenty objects presented span multiple painting schools that thrived during the Edo Period: from the deliberately amateur style of the Literati School, to the sumptuous golds of the patronized Kano School, to the subtly layered breaths of cloud and mountain landscape painting, to the whole condensed narratives revealed in the arc of a fan. These almost endlessly unfurling galleries might feel daunting if the objects and their presentation didn’t create such intimacy, the ample wall space and generous cases allowing scrolls and screens to fully display exquisite details that invite you to stay close. 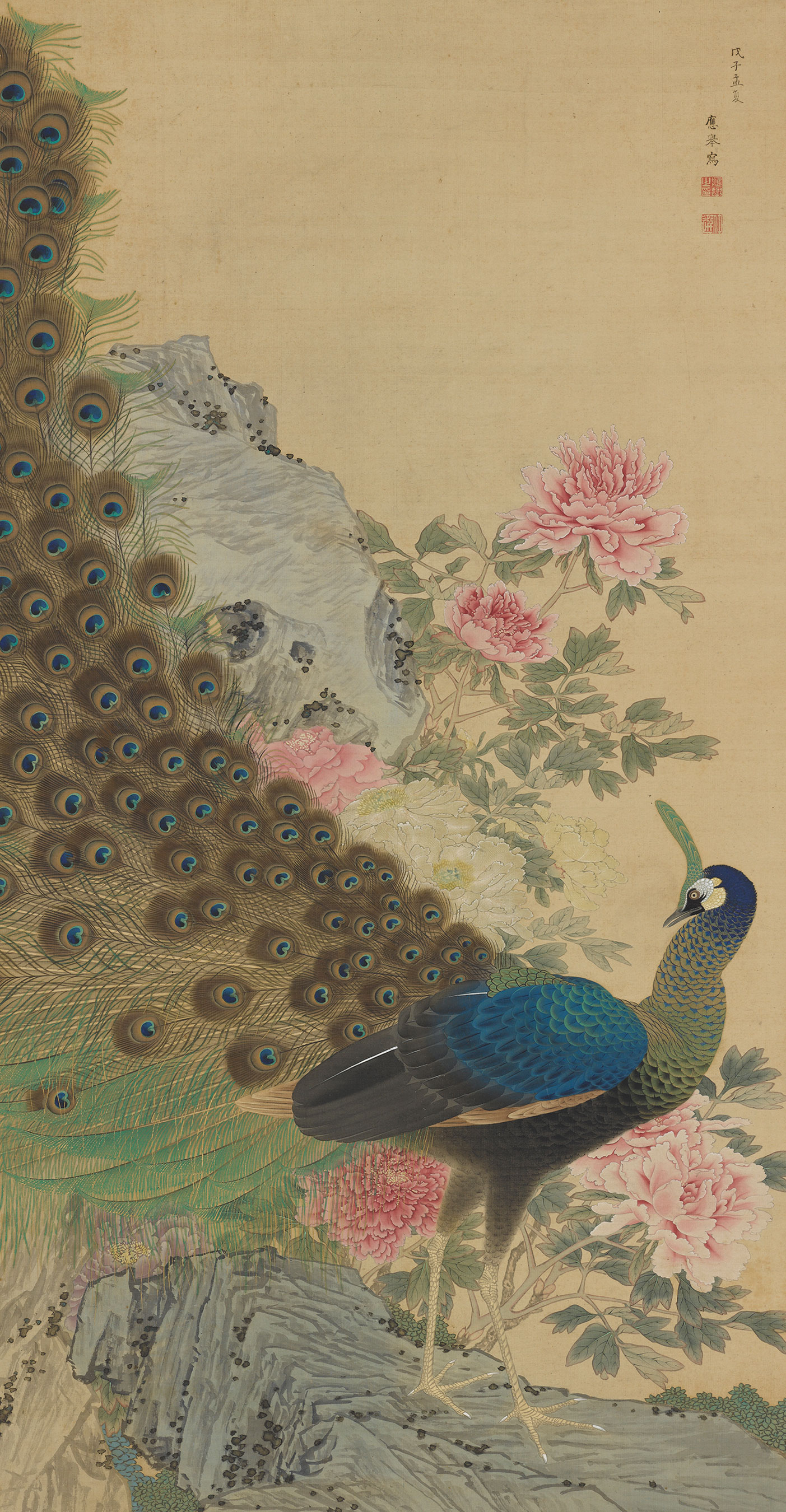 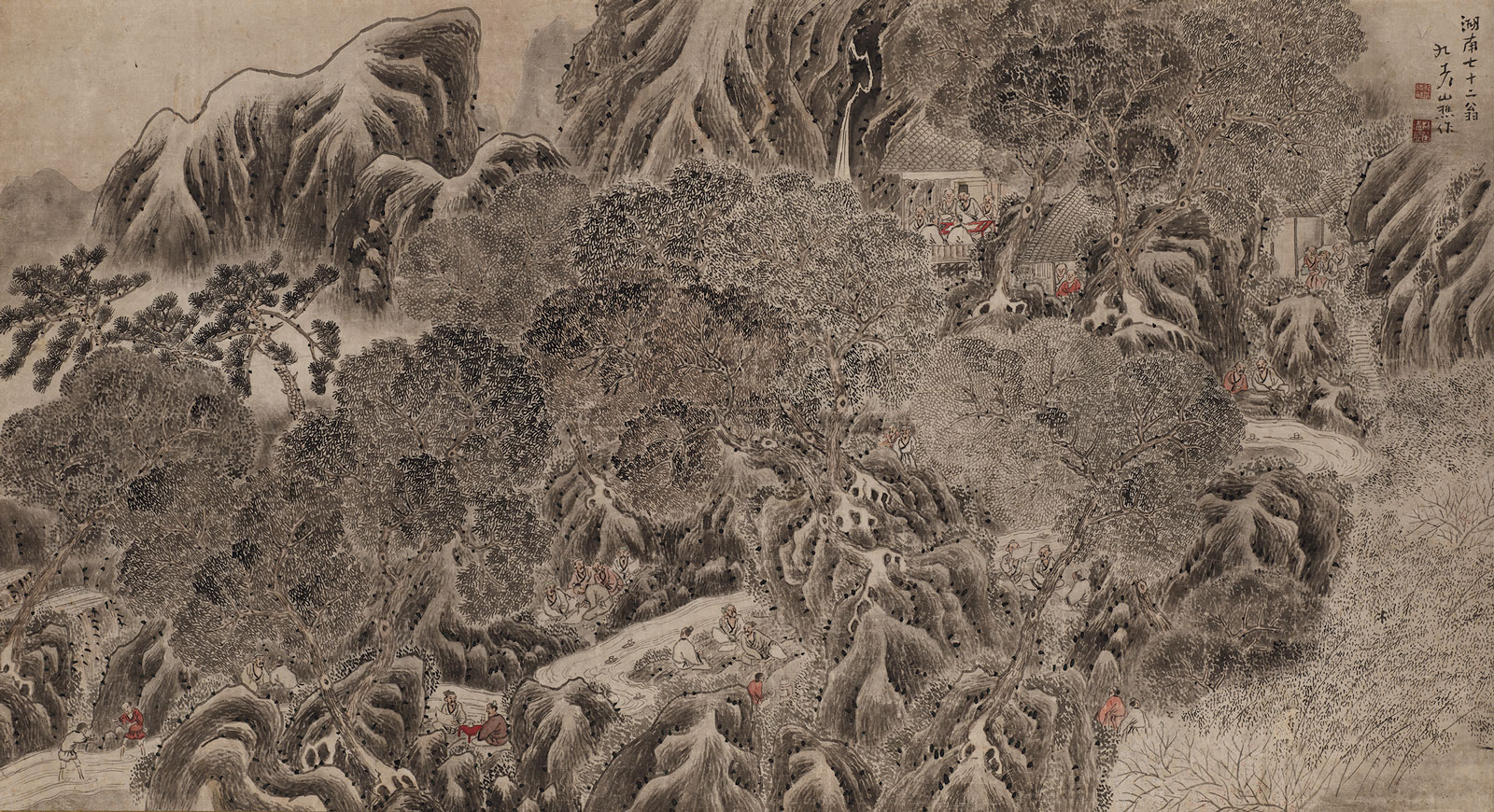 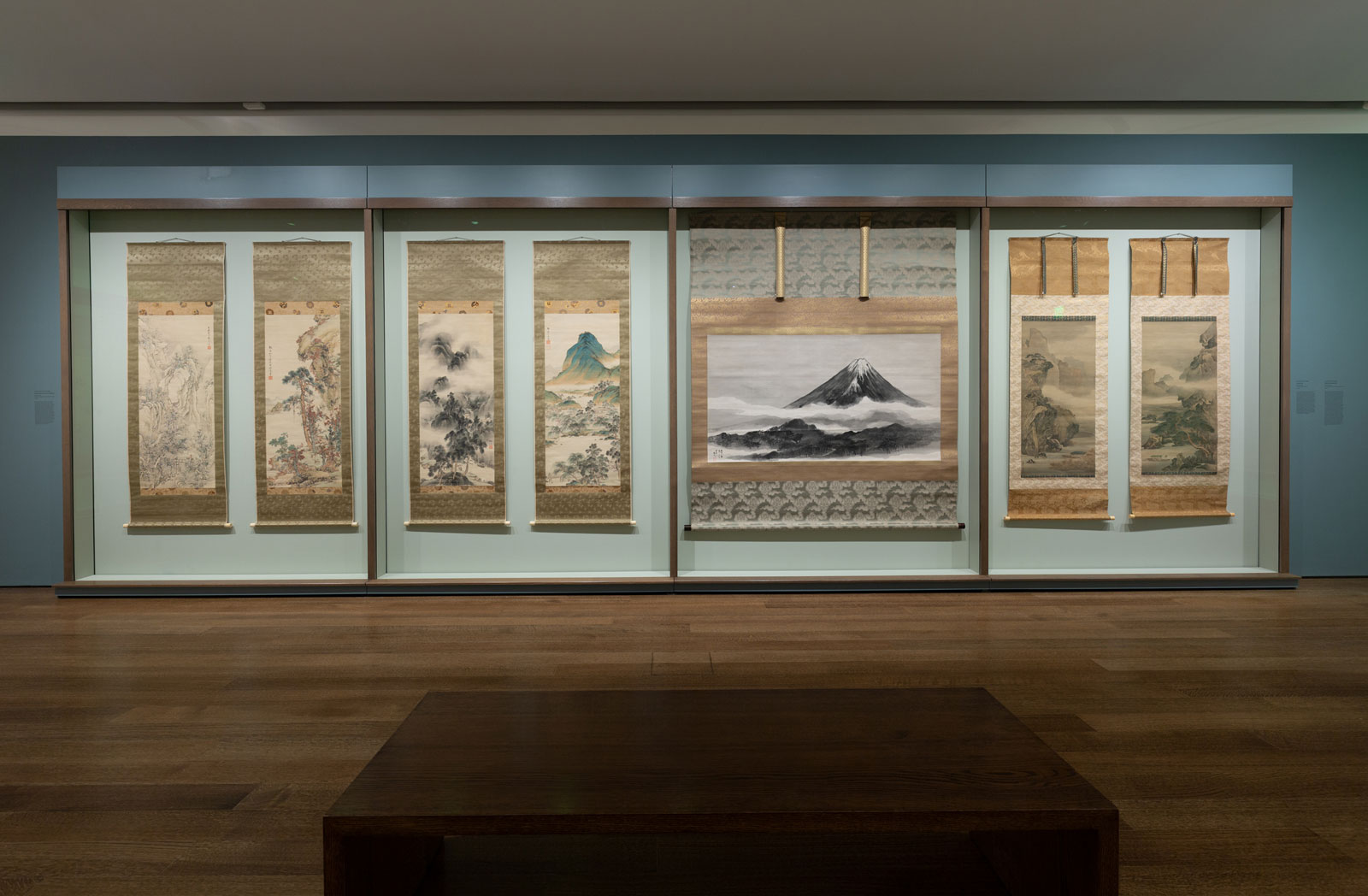 It’s a meditative pleasure—appropriate, given their Buddhist origins—to get lost in these details. Japanese art evolved, in Saunders’s words, “from a distinctive alchemy of silk, soot, gold, fire, and fur,” from a playful and curious fascination with the subject matter and tools provided by the natural world. This fascination was given an additional technological boost as Edo progressed, and the development of the microscope enabled a much deeper, even surreal visual intricacy in the wings of a beetle, the barbs of a peacock feather. And yet, remarkably, as the decades passed, the technique relaxed. Just as the camera’s prominence in France in the early nineteenth century, and its newfound command of exactness, led to Impressionism’s liberated brushstroke, a similar trajectory occurred in Edo: alongside scrolls depicting highly detailed bouquets of courtly flowers, we also see loose watercolors of one or two blossoms.

These blossoms encompass an epoch’s worth of prodigious skill, and yet require exceptionally little pigment to make their point. Whole recessed fields are implied with a few gentle pecks of a brush; backgrounds are left nearly empty, showcasing the magnified blooms. The ink that darkens almost imperceptibly as it bleeds from one petal to the next, pulled by pooling water, is so distinctively Japanese, as though only an artist living in this nation of small islands, who at no point is further than ninety-three miles from the sea, could truly understand the extent to which water can and cannot be contained. 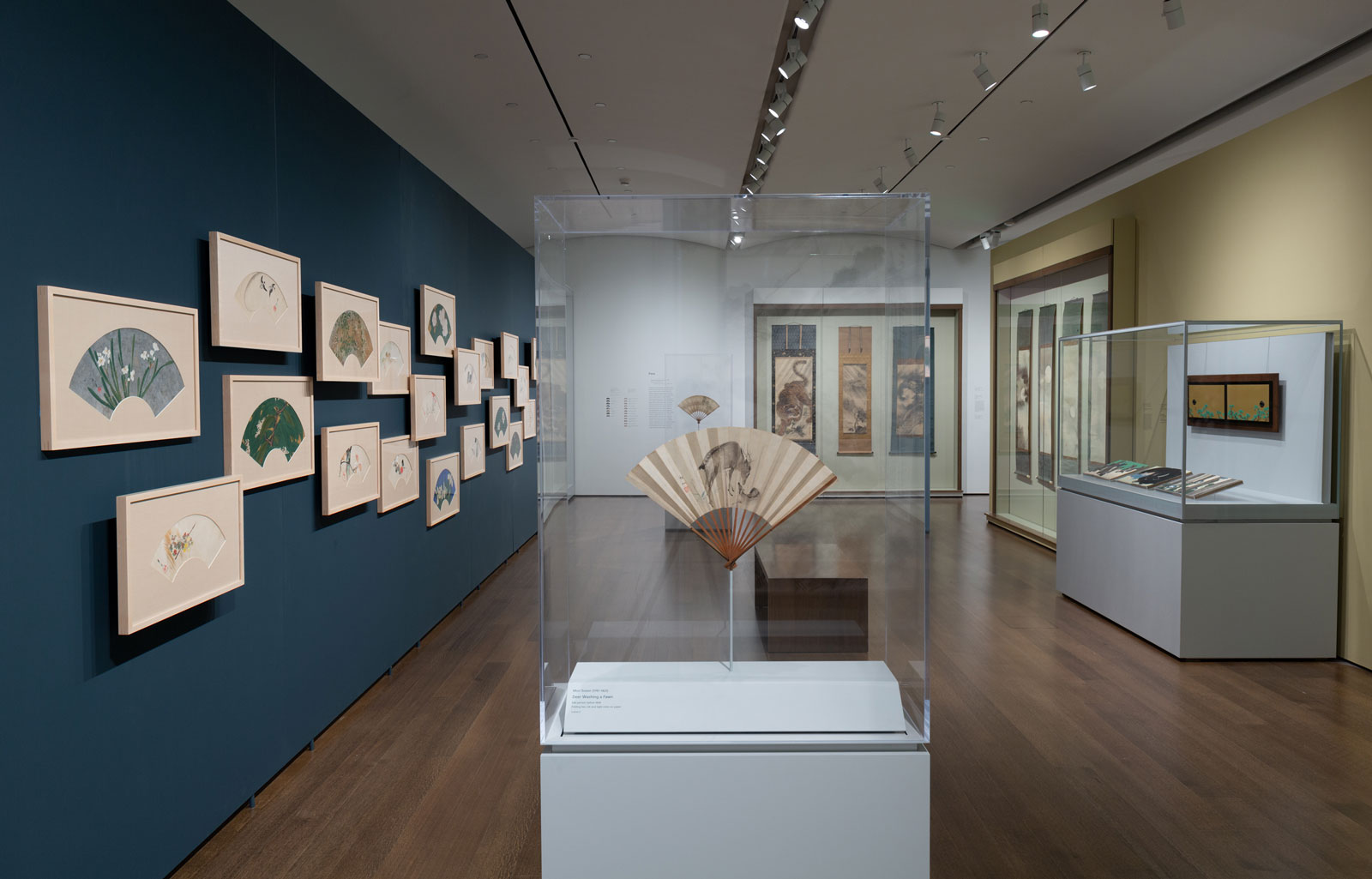 Yet there is also a keen eye toward Western convention. Dutch traders sneaked European plates into Edo, and the integration of depth of field, perspectival nuance—represented by a lower horizon line—and human anatomy championed by Western art since the Renaissance, is recognizably layered into Japanese painting as it evolved throughout the Edo Period. We begin to see an interplay of depth and flatness, two-dimensional planes to create the illusion of depth, particularly in the ukiyo-e prints, which were often composed to look like a series of theatrical backdrops, one behind the next, or like flat cutouts stacked on top of each other. It’s perhaps what made the art of this period so appealing to Westerners after Japan opened its borders, and what makes them so accessible today: this juxtaposition of the accurate and the illustrative, the real and the imagined, “a playful riff,” Saunders says, “on the idea that paintings create worlds, as well as reflect them.”

These objects that keenly observe, create, and reflect their world comprise an exhibition about isolation that can’t help but gain new meaning in our current world. Perhaps we can take some solace by imagining what’s taking place inside those darkened galleries—scrolls stretching, fans in conversation, butterflies dancing between buds, flourishing even in our absence.

“Painting Edo: Japanese Art from the Feinberg Collection” was scheduled to be on view at Harvard Art Museums through July 26. A collection of videos related to the exhibition are available here.

Tamar Avishai is the creator and host of The Lonely Palette, an award-winning podcast that aims to make art history more accessible one object at a time. She is a freelance audio producer and arts writer based in Cleveland, OH, and is currently producing a season of Raw Material, a podcast housed at SFMOMA. The Lonely Palette is the podcast-in-residence at the Museum of Fine Arts, Boston through July 2020. (May 2020)