At the outset this new novel by the Czech writer sounds much like a bedroom farce. A famous jazz trumpeter, Klima, is a confirmed womanizer deeply in love with his wife. “That’s my erotic secret, which most people find completely incomprehensible.” His affairs, he says, are pursued solely for the sake of the rebound, “that wonderful return flight toward my wife.” Ruzena, a nurse at a spa celebrated for its gynecological miracles, calls Klima to say that as a result of a one-night stand (when the trumpeter was playing at the spa) she is pregnant by him. Pregnancy is in a different category from philandering and wonderful return flights, so Klima hares off to persuade her to have an abortion. The next few days see a fair amount of bed-hopping.

The Farewell Party plainly doesn’t aim, as much current European fiction does, to be a self-justifying aesthetic or lyric event, whatever that may be. But, to begin with, it is at least informative. So, even beyond the iron curtain people tell lies to avoid marrying people to whom they have told lies to get into bed…. One touch of shabbiness makes the whole world kin. (As witness also another Czech novelist, Josef Skvorecky, also banned, also translated by Peter Kussi, also inclined to verbosity.) Informativeness is something, and something the novel can rise to supremely well. Milan Kundera appears to agree, to judge by his preference for the sobriety and maturity of the novel over the “romanticism,” the deceiving lyricism, of poetry, as expressed in his second novel, Life Is Elsewhere. Like that novel, The Farewell Party has not been published in its native country or its native language.

The whole world is kin. But—we are casually told—Jakub, the political dissident soured by his misfortunes, is unofficial ward to a girl whose father, his friend, was executed. This is the sort of passing remark one doesn’t too often meet with in Anglo-American writing. (With all due respect to E.L. Doctorow’s Book of Daniel, where it was scarcely a passing remark.) The turns and counterturns of Czech communism since 1948 form the other strand in Kundera’s work, the imprisonments, liquidations, and rehabilitations, the changing orthodoxies, the hopes and disillusionments. This strand is counter-pointed with the “private life,” the hopes and needs, exploitations and treacheries, of sexuality. The counter-pointing is so complicated (perhaps the Czech has too much to tell) that it is hard to grasp the final significance of this tangled music.

The similarities between The Farewell Party and The Joke, Kundera’s celebrated first novel, are striking. And not confined to similarities of generalized irritation, distaste, and at times disgust. According to Jakub, the saddest discovery of his life is that the victims of history are no better than their oppressors, for the roles are always reversible: and so it is advisable simply to blame everything on the Creator for making man the way he is. Otherwise, “to come to the conclusion that there is no difference between the guilty and their victims is to reach a state where you abandon all hope. And that, my dear, is a definition of hell.” In The Joke Kostka meditates on Ludvik, the hero and victim of the “joke,” a figure much like Jakub, another political unfortunate, another soured survivor: “You have never forgiven mankind…such general bitterness toward people is evil and sinful. It has become your curse. Because to live in a world in which no one is forgiven, where all are irredeemable, is the same as living in Hell.” Both Jakub and Ludvik know that this is so: the knowledge doesn’t help them very much.

There is a saint, too, in both novels. In The Joke Kostka, a Christian Marxist, befriends the runaway Lucie, a poor man’s Ophelia, victim of multiple rape and social rejection, and then spoils everything by sleeping with the girl. “All that talk about Jesus and God had been only a veil for the most earthly bodily desire.” (Note should be taken of the touching passage which tells of the village children leaving food out for the timid lost girl: reminiscent of Brecht’s poem, “Children’s Crusade,” it shines out of the novel.)

In The Farewell Party the saint is Bartleff, a mysterious American millionaire staying at the spa: his trouble is not gynecological but cardiac. Despite being an American millionaire, he is distinctly less convincing as a saint than Kostka, in part because of the blue halo he wears at times: “People who love God with exceptional fervor are rewarded by a joy which fills their souls and radiates outward.” Bartleff befriends the pregnant Ruzena and then spends a night with her—which may conceivably be a saintlike act, in that it diverts the girl’s love from the reluctant trumpeter, and an act of altruistic courage in that Bartleff’s “life hangs by a thread” and “every night of love involves great risks for him.”

Unhappily Ruzena (not in fact a very engaging character) dies from inadvertently swallowing a poison pill which Dr. Skreta, the director of the gynecological clinic, had given Jakub fifteen years earlier so that, whatever happened in public life, he should be master of his own private death. To Jakub Ruzena somehow “represented his eternal downfall”; he knows that she has walked off with the pill, but allows himself to fail to warn her. Surely a piece of heavy symbolism!

As for humor, the true and harsh joke of The Joke is not so much the joke of the title—the facetious postcard, “Optimism is the opium of the people!” which Ludvik as a student sent to his girlfriend and which led to his expulsion from the Party—as the joke arising out of Ludvik’s attempt to avenge himself on his opportunist persecutor, fifteen years later, by seducing the man’s wife, Helena. (Again a lapse of fifteen years.) During the wooing Ludvik takes Helena into the country, the Vltava on one side and sheer forest on the other: she skips about “like a silly girl,” but has to moderate her romantic ecstasies since she has “a spot of bother” with her heart which beats like mad after the slightest exertion. Ludvik brings off the seduction, only to find that the couple have lived separately for the past three years and that his erstwhile enemy now has a young and much more attractive girlfriend—much more attractive to Ludvik, too. The pill motif recurs. But whereas in the new novel Ruzena takes a poison pill in mistake for a sedative and dies of it, the suicidal Helena swallows laxatives instead of aspirins—with results that oblige one to protest that Kundera humiliates this character savagely, far beyond the call of necessity or desert or even decency.

The humor in The Farewell Party, which even has what resembles a happy if somewhat farcical ending, is considerably lighter and less abrasive, and derives chiefly from the activities of Dr. Skreta, whose specialty is curing barrenness in wives. This he does by means of injections from his private sperm bank. It is truly an agreeable relief to see the melancholy Jakub, about to say farewell to his native land, noting how many little Skretas there seem to be around. Jakub—so Jakub muses—had given up his life to politics, “he had been living, as they say, in the center of the action…listening to the heartbeat of his country.” But was it a nation’s pulse, or only an old alarm clock, an obsolete clock measuring the wrong time? For there in front of him was the Great Father Skreta actually turning his eugenics dream into reality and populating the region with children created in his own image.

Dr. Skreta and the clinic are likely to remind us of Hofrat Behrens, Dr. Krokowski, and the International Sanatorium Berghof of Thomas Mann’s The Magic Mountain. People at the Berghof, Herr Settembrini remarked, were possessed of two ideas, and only two: “temperature—and then again temperature”—by the second temperature meaning a fervid preoccupation with local amatory activities. Skreta’s hobby is playing the drums. The Hofrat’s was painting, Krokowski’s was lecturing psychoanalytically and equivocally on love. But where The Magic Mountain has Goethe and German music behind it, The Farewell Party has only tawdry destructive ideologies and a jazz trumpeter. Jakub can only be “symbolic” in the matter of the pill, for only a symbol would have allowed Ruzena to die by default. The Magic Mountain is “symbolic” enough, God knows, but it can be read, is read, as a rich naturalistic novel, as we read Dickens. It has an extra dimension.

While The Farewell Party commands one’s intellectual respect and admiration, to read it is not wholly a pleasure. The sourness, the glum cynicism consequent upon disenchantment and alienation, come through too strongly, or too repetitively; there is an excess of soul-searching, whether self-accusatory or self-justificatory; it has the air of a cold-hearted metaphysical puzzle whose terms are either incomplete or not clearly enough set out. How far these impressions are due to inadequacies and injustices in translation I cannot say. But, for instance, Bartleff hardly seems much of a saint, or mysterious, or special, when he says of the dead Ruzena, “You have no notion what a fine person was locked inside of her.” Novels may be very different from lyric poetry, but style tells with them too.

The richness of The Magic Mountain, its “meticulous” solidity and its diversity of viewpoints, in a sense leave the reader where he was—though they leave him much better informed. One thing is set against its opposite, as in the rather blatant case of Settembrini and Naphta, the two warring political principles, and there is thus an open-endedness to the novel which even its ironies help to sustain. Not so in The Farewell Party, which, whatever its truthfulness, is finally lowering in both its explicitness and its clever irony. The world of The Magic Mountain could go somewhere, anywhere—the world of The Farewell Party and The Joke doesn’t look to be going anywhere at all. Many readers will be ready to accept this as inevitable and commiserate with its truthful author. I am not sure about this response. Perhaps literature needs to be something more than simply and solely true to the facts. 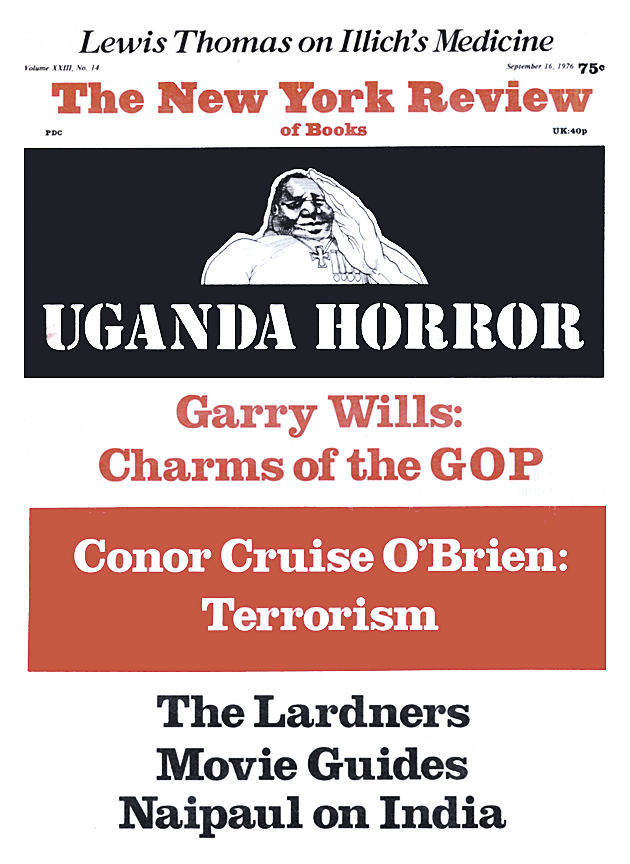