Mark Danner’s article on the Sunni opposition to the Coalition Provisional Authority [“Delusions in Baghdad,” NYR, December 18, 2003] is interesting and accurate, as far as it goes. And that is pretty much confined to the Sunni Triangle, and 20 percent of Iraq’s population. A wider focus would reveal a different picture: it would take in the Shia of Iraq, perhaps 60 percent of the population, who mostly accept us. They look forward with growing impatience, however, to next July, when Iraq will regain its sovereignty and they can more emphatically make their weight felt. It would also include the Kurdish statelet in the north, where the Kurds for a decade have flourished as seldom in their history. The Kurds detest Saddam and his Sunni Ba’thi heritage. The Kurds want most to be able to continue on a path to further prosperity, and as much autonomy as local and regional conditions permit. Meanwhile, life is hard for the “refuseniks” in the Sunni Triangle. The “never-ending search for Saddam” (Danner’s term) is ended—in a way that deeply humiliated his supporters.

Looking ahead, it will be hard for the Sunnis to accept their loss of power and privilege and the ability to abuse, which they have enjoyed for the past four hundred years in Mesopotamia. But those days are gone forever, along with Saddam and his clique. Sunni leaders should seek reconciliation with the (so far) remarkably non-vengeful Shia, and ignore pledges of solidarity and support from the Sunni world. They will surely be let down with disastrous consequences to their community.

Meanwhile, I am happy to observe that our intelligence is becoming more proficient at processing large masses of information and using the conclusions for increasingly successful counterterror operations by the world’s ablest military. In a word, I am optimistic that next summer we will be able to hand sovereignty over to an Iraq, 80 percent of which look forward to cooperation with the United States, and 20 percent of which—if they are wise—will be mending fences with the US and their fellow Iraqis.

I am glad that Ambassador Horan finds my article “interesting and accurate, as far as it goes.” I must confess that I feel the same way about his letter—up to and including the implication that the writer does not, alas, go quite far enough.

The ambassador is right, of course, that in writing about the Iraq war I focused, as does much of the press, on the war itself. He echoes the argument many high administration officials were making in mid-October, just before I traveled to Iraq. At that time, in a series of well-publicized and obviously choreographed speeches, the national security adviser, the secretary of state, the vice-president, and finally the President himself all contended that the situation in Iraq was steadily improving, that much of the country was peaceful, and that journalists, in focusing on violence in the so-called “Sunni Triangle,” were offering Americans, in President Bush’s words, “a distorted picture” of what was happening in Iraq.

With the coming of the Ramadan Offensive, at the end of October—which began with the rocket attack on the Rashid Hotel and the suicide bombing the following day of the Red Cross compound, described in the opening of my article—administration officials largely discarded this line of argument. In November more Americans died in Iraq than during any previous month of the war, and the number of attacks against US forces doubled, which made it difficult to contend seriously that the war was a product of press distortion. Now, in the wake of the capture of Saddam Hussein, we see the argument appearing again, set out forcefully in Ambassador Horan’s letter. Whether the ambassador finds himself trapped in an old storyline or represents the vanguard of a new administration effort to define the war, I am glad to have his letter, for he takes up a central, and valid, issue: the perception that the war’s “progress,” or lack thereof, is a critical component, perhaps the critical component, of what the Pentagon calls “the battlespace.” For the insurgents fighting the US forces in Iraq, the American “center of gravity”—what they must destroy to win—is nothing less, as one American operations officer told me, than “the will of the American people.” The path to that center of gravity runs through the eyes, and the cameras and pens, of the press.

That being said, in reading Ambassador Horan’s optimistic picture of a war tightly limited to the “Sunni Triangle,” I was reminded of the feeling one often has when talking to American civilian officials in Iraq: one begins by suspecting they are not being candid in the view they offer of the situation, which leaves one feeling annoyed; one ends by suspecting they are being candid in the view they offer of the situation, which leaves one feeling worried. The ambassador says the “Sunni opposition to the Coalition Provisional Authority” is “pretty much confined to the Sunni Triangle, and 20 percent of Iraq’s population.” Should one be annoyed or worried by this statement? First, though Sunni Arabs are indeed thought to constitute roughly 20 percent of the total population of Iraq, the so-called Sunni Triangle, which encompasses Baghdad itself, probably includes more than a third of Iraq’s population, and perhaps much more. Second, as any newspaper reader knows, since October the ambit of the attacks has been steadily spreading, until “no more than 60 percent,” according to one intelligence officer I spoke to, now take place in the Sunni Triangle—which is to say, four in ten of these attacks, and perhaps more, take place in cities like Mosul and Karbala, whose inhabitants, in the ambassador’s words, “mostly accept us.”

The ambassador makes much of the troubled process by which, “next July… Iraq will regain its sovereignty and [the Shia—and presumably the Kurds] can more emphatically make their weight felt.” Much remains unclear about the risks this will pose for America’s own position in the Gulf. I will only point out that the ambassador neglects to mention that until November 15, when the administration hurriedly reversed its policy in the face of the very attacks whose importance he discounts, this was not administration policy—indeed, the Coalition Provisional Authority he served as senior counselor vehemently opposed such an early handover of sovereignty, insisting on an orderly process that would include writing and ratifying a constitution and moving toward elections in perhaps eighteen months or two years.

Only after the series of violent—and, yes, high-profile and extensively covered—attacks of the Ramadan Offensive, and L. Paul Bremer’s hurried trip to Washington for consultations, did the administration abruptly overturn its previous policy and give in to the demands of its Iraqi allies in the Governing Council to hand over sovereignty in a matter of months, and without benefit of elections. As I write, and despite the ambassador’s “optimism” that the United States will hand over sovereignty to an Iraq “80 percent of which looks forward to cooperation with the United States,” that policy is in trouble, caught between the insistence of Ayatollah Ali al-Sistani, the Shia majority’s most influential leader, on holding elections before power is handed over and the reluctance of the Kurds to relinquish any of the privileges that the ambassador so enthusiastically endorses. If administration officials are so eager to hand power over to “the 80 percent” of Iraqis who “look forward to cooperation with the United States,” why have they so strenuously resisted the direct election that Ayatollah al-Sistani demands?

The fact remains that the near-term handover of power about which the ambassador boasts would not be taking place without the violence about which the press writes—and whose importance he so vigorously discounts. It is axiomatic that for the insurgents to succeed they need not defeat “the world’s ablest military”—that is impossible; instead they must defeat the will of the American political leadership, which, in this election year, is even more delicately attuned than usual to the murmurings of the American public. And if, for the insurgents, American political will is the “center of gravity” they must destroy, it is a center of gravity that—because of the Bush administration officials’ relentless exaggeration of the threat posed by the Iraqi regime and their relentless discounting of the difficulties the war to remove it would present—has been left deeply vulnerable, a vulnerability fully on display in November when the administration so quickly altered its political program in response to the violence that the insurgents unleashed.

Critical as it is that the administration move to lessen that vulnerability, a first step would be to introduce what has been so woefully lacking during the run-up to the war and the war itself: a degree of candor when American officials talk about the war that young Americans are fighting. Unfortunately Ambassador Horan’s letter, however welcome and well meant, is not a step in that direction. 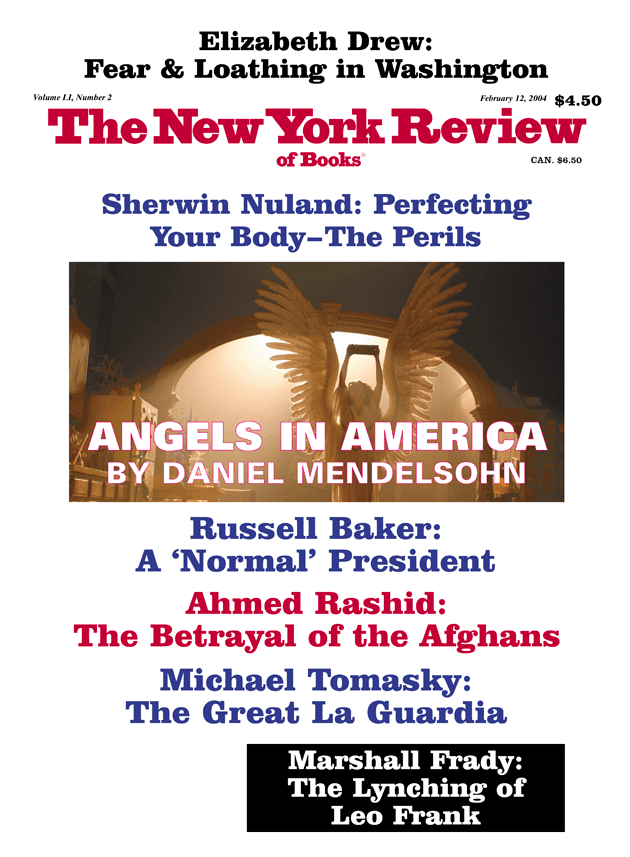 Iraq: The Economic Consequences of War

‘The True History of the Gulf War’: An Exchange