In February 2019, the choreographer Pam Tanowitz held an open rehearsal at the Martha Graham Dance Company studio in New York. She was working on a piece called Untitled (Souvenir), in which she spliced together choreography from Graham’s Dark Meadow (1946) and Legend of Judith (1962) with her own. As the company members danced, she marked each step: “This is a Pam, this is a Graham.” Graham dancers are known for the precision with which they count to music and regulate their breathing. Tanowitz asked them to unlearn that training, hold poses a beat longer than they otherwise would, and fall out of position when it felt right to do so.

Tanowitz, who works with a range of companies and founded her own in 2000, has developed a style of choreography that is rigorous and structured while often appearing permeable, receptive, and spontaneous. She makes great use of theater wings, upstage recesses, and even audience aisles. One of the joys of watching a Tanowitz performance is catching moments that seem unplanned: a gracious smile between dancers, a performer who stays airborne after her peers have landed, or a group huddle that falls to the left of a spotlight.

This past year, in addition to Untitled (Souvenir), Tanowitz debuted works for the New York City Ballet, the Royal Ballet, and the Paul Taylor Dance Company. She closed this busy season at the Joyce Theater with the New York premiere of New Work for Goldberg Variations, a 2017 collaboration with the classical pianist Simone Dinnerstein set to Johann Sebastian Bach’s Goldberg Variations, a composition that consists of an aria and thirty variations on it. In this seventy-five-minute piece, Tanowitz’s choreography and Dinnerstein’s interpretation of Bach depend on each other to create a lush, freewheeling performance that builds on both artists’ sensibilities.

Dinnerstein anchors New Work for Goldberg Variations from center stage, where she plays Bach’s familiar score from a glossy black piano, while the dancers—five women, one man, all frequent collaborators of Tanowitz’s—join her in gauzy tunics and pants from the costume designers Reid Bartelme and Harriet Jung. Brushed vertically in dusty blues, yellows, and reds, their attire recalls ribbon candy. As they dart behind the piano, lunge upstage, and form, then disband, a constellation of partnerships, the lighting design by Davison Scandrett casts their movements in bursts of vivid ruby and lemon.

Tanowitz’s choreography alternates between relatively casual movements—an unencumbered skip from Lindsey Jones, a windmilled arm from Melissa Toogood—and complex arrangements, including a flocking formation around Dinnerstein’s piano during Variation 15, one of the composition’s more gentle, meditative passages, that disintegrates with a few strides from each dancer. Tanowitz doesn’t linger on any configuration for too long, and she frequently upends the audience’s expectations about what might happen next on stage. She delays, for instance, the first appearances of the dancers Jason Collins and Netta Yerushalmy, each of whom bursts from the wings more than ten minutes into the piece. Tanowitz repeatedly revises the point of emphasis in her choreography, too, drawing the audience’s gaze from Jones’s elongated, yearning arms in one step to her arched, frenetic feet in the next. All of the dancers perform these potentially jarring shifts in movement style—the choreographic equivalent of Bach’s variations—with a seamlessness that underscores not only their skill but also Tanowitz’s ability to stage complex sequences with crispness and buoyancy.

With each variation, Dinnerstein and the dancers conduct a nonverbal exchange: Dinnerstein communicates through her instrument, and the dancers use their bodies to respond. At times, these performers physically interact with Dinnerstein’s piano, especially Maile Okamura, who leans against its front like a figurehead on a ship, crawls under it, and grips its edge like it’s a ballet bar or a dance partner. At the close of Variation 20, a bright, jovial sequence that races towards its last note and requires rapid hand-crossing from Dinnerstein, Jones perches on the back of the pianist’s bench and exuberantly flaps her feet, recalling Tanowitz’s challenge to the Graham dancers: ease up on counting to the beat and let ingrained training and instinct guide the work. 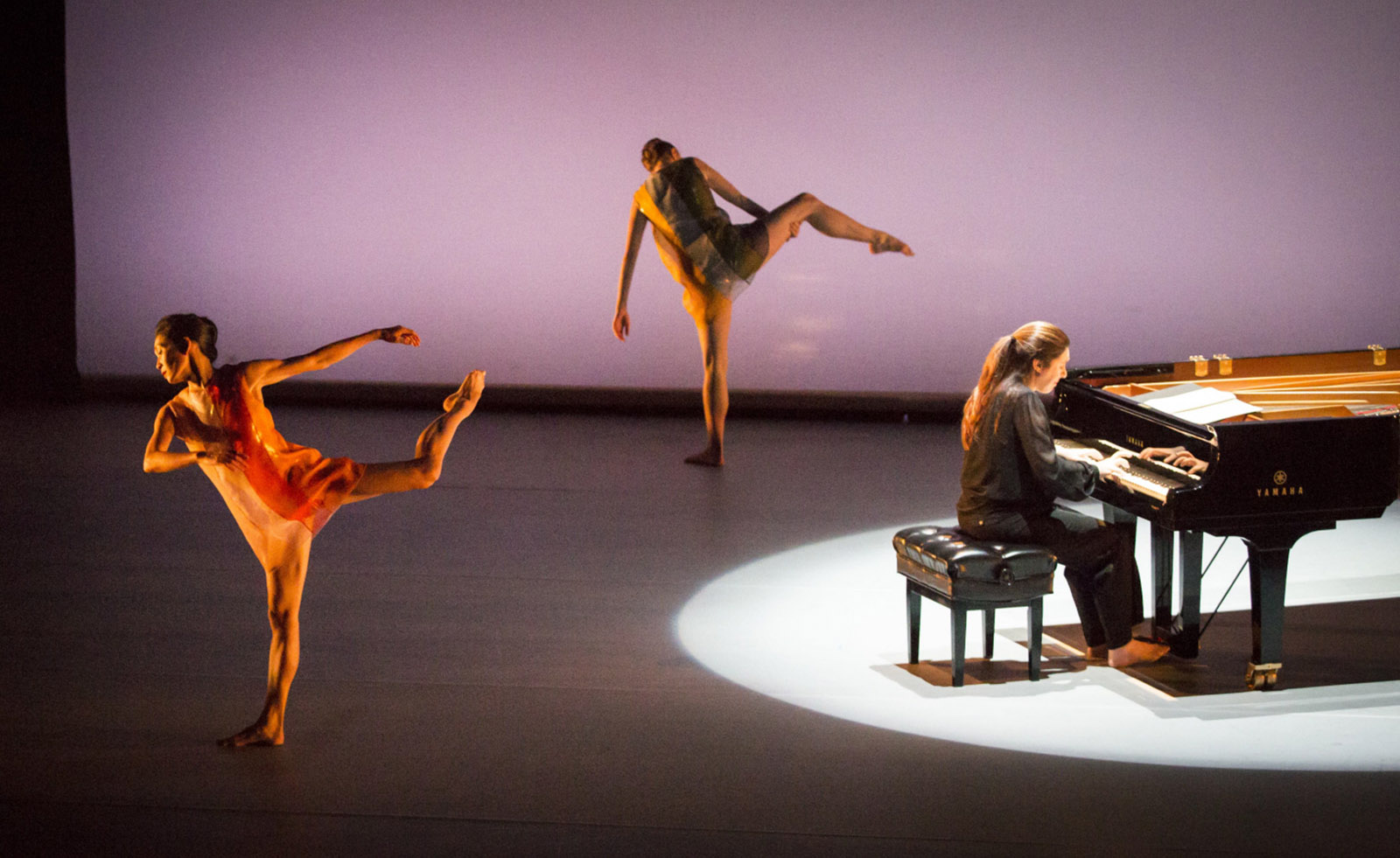 Dancers Maile Okamura and Maggie Cloud, with Simone Dinnerstein at the piano, 2019 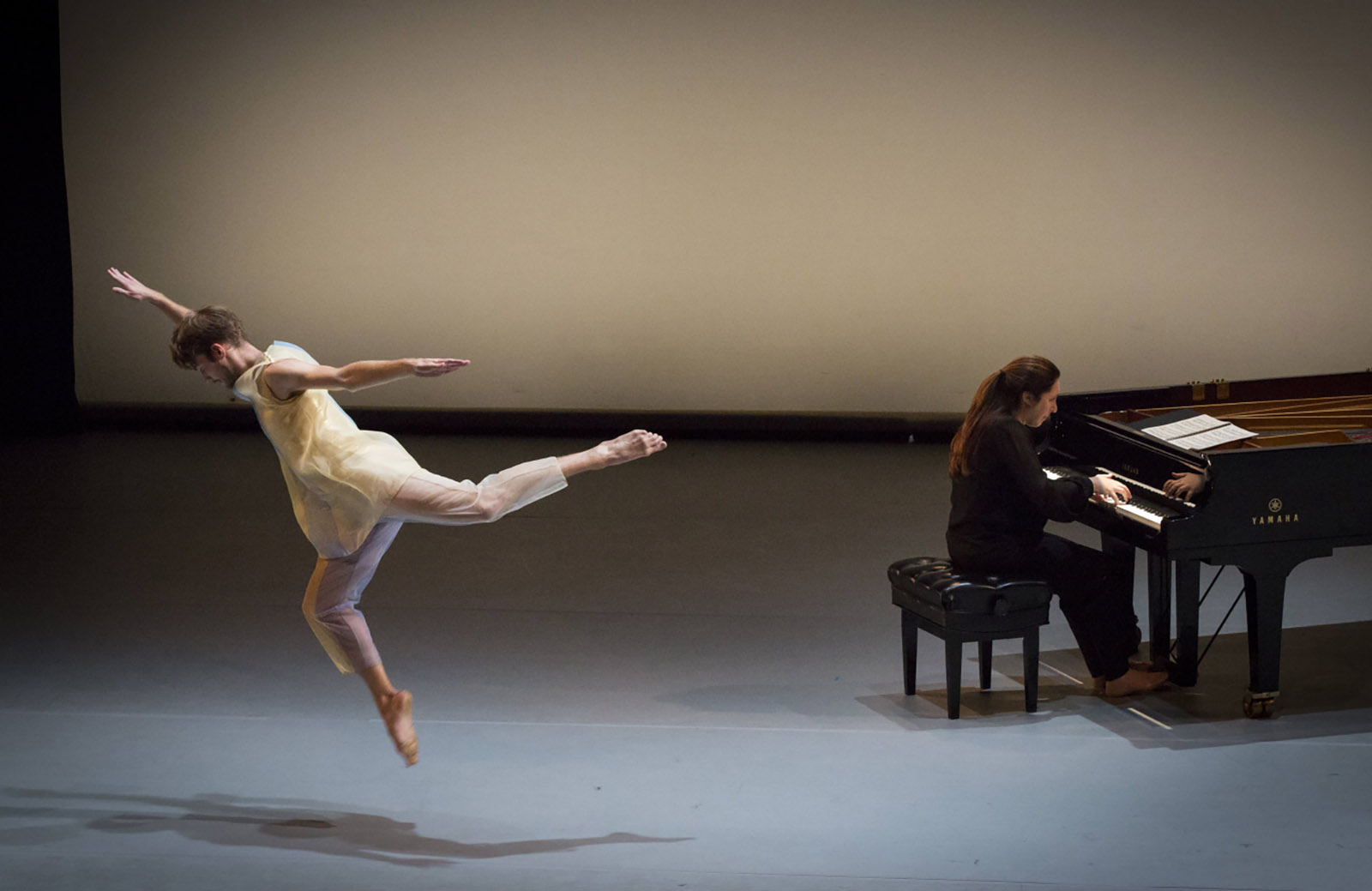 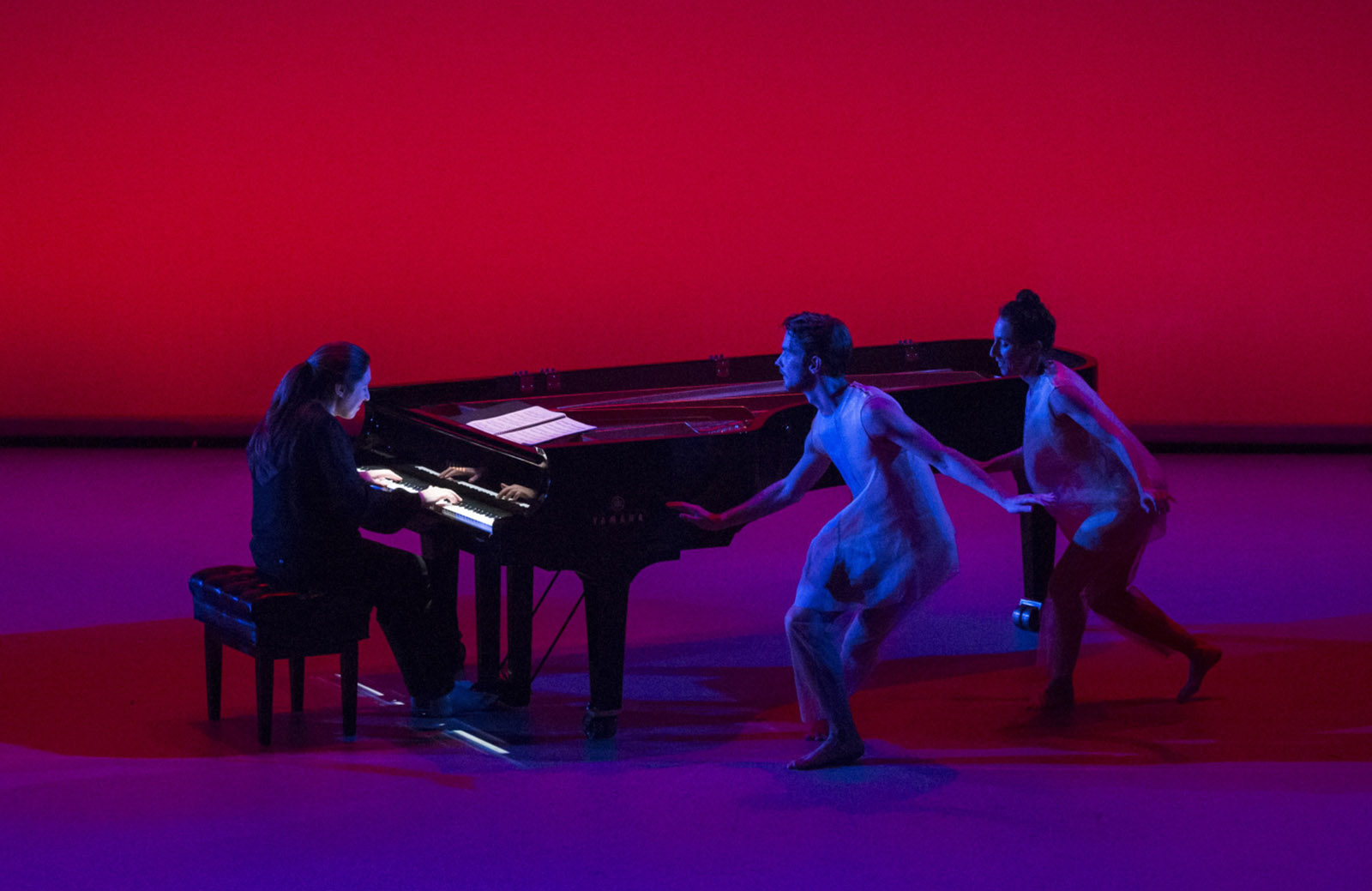 Having a musician perform alongside dancers isn’t a new phenomenon: in 1995, Mark Morris—who has frequently choreographed dances for Baroque music, including Bach—collaborated with Yo-Yo Ma for Falling Down Stairs, in which the musician played Bach’s Cello Suite No. 3 from a podium among the dancers. Earlier this season, the Joyce Theater premiered The Day, a collaboration from the choreographer Lucinda Childs, the cellist Maya Beiser, and the dancer Wendy Whelan that featured the latter two on stage together. But by putting Dinnerstein in the midst of the dancers here, New Work for Goldberg Variations calls particular attention to the way she plays Bach’s stated theme and its thirty variations—rigorous piano exercises that shift in tempo and mood, sportive in parts, wistful in others. To place Dinnerstein among the dancers also emphasizes her own choreography: she slowly pedals her bare feet, flutters her fingers over the piano keys, and leaps her hands over one another.

This last gesture is fundamental to playing the Goldberg Variations, which was originally composed for a two-tiered harpsichord. The pianist Glenn Gould launched his career in 1955, at the age of twenty-two, with a rendition of the piece that introduced audiences to both the then-obscure score and what Michael Kimmelman, writing in these pages in 2004, called Gould’s characteristic “exaggerated tempos and dryness of attack.” By the time Gould recorded a slower, more contemplative version in 1981—released the following year, days before he died—many more pianists had produced versions of the work. Dinnerstein entered into this long tradition in 2005. Her interpretation stands out not only for her mastery of the score but also the sense of generosity with which she navigates it. She could have brooded during the three variations in G minor. She has approached them, instead, with yearning introspection and tenderness.

Watching her perform live enhances this effect, and challenges Gould’s preference for recording studios over concert halls. It also differentiates New Work for Goldberg Variations from other dances set to the Bach score that aren’t built around a particular pianist’s interpretation of the work, like Jerome Robbins’s Goldberg Variations (1971), which he arranged for the New York City Ballet after choreographing a string of high-budget Broadway shows and Hollywood films. That ballet has a joyous theatricality to it: as the Bach variations modulate from lively to stately and back again, so does Robbins’s movement vocabulary. And though it has the markings of a more classical work—a sprightly corps de ballet, bounding pas de deux, virtuosic leaps and lifts that show off the dancers’ Balanchine technique—the performance feels more uninhibited than much of the company’s output to that point.

Tanowitz draws similar energy from Bach’s score, and echoes some of Robbins’s choreography: most notable are the instances in which her dancers sit and stand at rest, watching one another, as if they were still in rehearsal. But where Robbins deploys symmetry, Tanowitz achieves imbalance; where he arranges movements to the beat of Bach’s score, she relies on counterpoint; and where his dancers’ entrances and exits usually sync up with the start and end of each variation, hers shift between the stage and wings within each section of music to form a delightful, unpredictable flurry of movement. In this sense, her work bears more resemblance to “Excerpt from Goldberg Variations,” a series of improvisational solos created by the dancer and choreographer Steve Paxton, and set to both versions of Gould’s Goldberg Variations. Each time Paxton performed the work between 1986 and 1992, he—and now interpreters like Nicholas Sciscione, who danced a version in 2017, based off of Paxton’s recordings, for the Stephen Petronio Company—had to engage anew with Gould’s recordings.

Tanowitz has said that she initially resisted the prospect of a collaboration set to Bach’s Goldberg Variations, worrying that it might be restrictive to work with such a well-known piece of music, and one already mined by choreographers. But what Tanowitz and Dinnerstein have created is a complex, exacting performance that preserves a sensation of spontaneity, improvisation, and embrace of error. By upending our expectations about what might happen on stage, and where, the duo invites the audience to be as receptive and observant as they are. This effect extends to even the most practical moments. Midway through the performance I attended, Yerushalmy hovered at stage right and, just before she slipped into the wings, backed into a shadowy hand that spotted her from their recesses, then whisked her away. The interaction was brief, and one that I may not have been meant to see, but it could have appeared at center stage without looking out of place: it was a neatly choreographed, naturally performed, and perfectly timed encounter.

Over sixty years, Yvonne Rainer has made an art of bringing a deadpan comic tone to strenuous scenes of bodily exertion, political struggle, emotional strain, and taxing thought.

Over sixty years, Yvonne Rainer has made an art of bringing a deadpan comic tone to strenuous scenes of bodily exertion, political struggle, emotional strain, and taxing thought.

Erica Getto is a dance critic based in New York. (June 2022)

Though HERZ SCHMERZ captures some of the more subtle pangs of delight and disappointment that underpin Robert Walser’s work, the performance resonates more as a homage to the writer than as a translation of his work.

When I asked Merce Cunningham in the mid-1990s for feedback on near-final galleys of a book about him that I was editing for Aperture, Cunningham’s only response was: “Do there have to be so many pictures of me?”

Balanchine at the Crossroads

Wexford is a small town on the sea in the south-east of Ireland and an unlikely place to host an opera festival. Yet since 1951 in late October the town has organized what has become for many opera-lovers an essential date in the calendar. The reason why it has remained…

After the 1924 premiere of Juno and the Paycock at Dublin’s Abbey Theatre, Sean O’Casey thanked Lady Gregory, who with William Butler Yeats served as the legendary theater’s artistic director. “You gave me encouragement,” he told her. “And it was you who said to me…‘Mr. O’Casey, your gift is characterization.’…