In Churchill's Shadow: Confronting the Past in Modern Britain

Of the four leaders who dominated international politics during the Second World War, Winston Churchill had the greatest amount of military experience. Adolf Hitler was a common soldier and an intrepid dispatch carrier during the First World War. Franklin Roosevelt served briefly as assistant secretary of the Navy after the same conflict. Joseph Stalin lacked even this minimal acquaintance with modern war, and unlike Hitler had no natural tactical or strategical gifts, as he was to show in June 1941.

Winston Churchill, however, was fascinated from early childhood with soldiers and the military life. After graduating from Sandhurst, he received a commission in the 4th Hussars and, before taking up his duties, experienced his baptism of fire in Cuba, in a bitter conflict between Spain and a hard-fighting guerrilla force. Posted then to India, he took leave to join the Malakand Field Force, which was engaged on the Northwest Frontier in a nasty little war which Churchill described in his first and highly successful book in 1898. From then on his military and literary careers proceeded apace. In 1898 he managed to wangle a commission in the 21st Lancers in Egypt, where Sir Herbert Kitchener was seeking to repel the incursion of a strong Sudanese army commanded by the holy man called the Khalifa Addalla, and participated in the battle at Omdurman which broke the back of the Sudanese force.

His lust for battle still unsatisfied, he then gave up his commission and went to South Africa, where the Boers were challenging British sovereignty, to cover the fighting as correspondent for the Morning Post. This might have been a prosaic assignment had he not been captured during the siege of Ladysmith and subsequently effected a dramatic escape from imprisonment that made him famous throughout the empire. He could have parlayed this into a lucrative journalistic career but, when offered a commission by Sir Redvers Buller, who badly needed good officers, he accepted and was subsequently engaged at Spion Kopp, the relief of Ladysmith, and Dewetsdorp, repeatedly demonstrating his courage and charmed life under fire.

In his spirited account of these engagements, the distinguished historian John Keegan has written that Churchill’s military years “must be counted among the most significant of his life.” He never had reason thereafter to doubt his physical courage and while continuing to be attracted to war, he took a realistic view of the sacrifices it demanded. In particular, he was repelled by the costly trench warfare that characterized the war of 1914–1918, and sought to find a substitute for it. Thus in 1915, when he was First Lord of the Admiralty, he was the architect of the Dardanelles campaign, which was designed to expel Turkey from the war and to expose the southwest flank of the Central Powers to an oblique attack. However brilliant in conception, the plan failed miserably in execution. The British fleet was repelled by the shore batteries on the Dardanelles straits, and the infantry attack on Gallipoli was beaten off by the Turks under Enver Pasha. It was all, Queen Alexandra said subsequently, “that stupid foolhardy Winston Churchill’s fault.”

Whether or not this was a fair judgment, many people seemed to think it was apt. In the years that followed, Churchill found it hard to shake the label of Gallipoli, and although he returned to Parliament and to high office some of his colleagues never quite trusted him. They pointed to the fact that he had twice “crossed the floor” (changed parties) and was notoriously quixotic in his support of issues. This was indeed true. His opposition to granting dominion status to India was stubborn and sometimes irrational, and during the abdication crisis of 1936, when he supported Edward VIII, he was shouted down in the Commons.

And yet, as John Lukacs points out in his new book, Churchill was a man of vision and foresight. He was the first European statesman to understand that Joseph Stalin was a nationalist and had to be dealt with from that point of view rather than from the ideological one. And certainly he was the first to understand the danger that Hitler represented. At a party at the German embassy in London in October 1930 he said that he was worried about Hitler. And in early 1935, writing of Germany’s growing power since Hitler had become chancellor, he wrote:

Many of Churchill’s colleagues in 1935 doubtless thought that an exaggeration and even in 1938, after the Anschluss and Munich, there were those who still clung to the belief that peace would prevail in their time; but by 1940 all of Churchill’s premonitions had been realized and only his strong presence prevented worse from happening. With Hitler’s armies sweeping everything before them, there were those in the cabinet—Chamberlain and Lord Halifax above all—who might have been willing to explore a negotiation with the Führer to ascertain his possible terms. Churchill flatly refused, sensing that this would be “a slippery slope,” and by doing so certainly prevented the war from being lost.

Winning it was to take the united efforts of Britain, the Soviet Union, and the United States, a partnership in which Churchill, while always the most fertile in expedients, rapidly became the least considerable of the leaders. This was most apparent in his relations with the United States, to which Lukacs devotes some of his most interesting pages. In 1942 Roosevelt wrote to Churchill, “It is fun to be in the same decade with you,” but at the same time he was always a bit jealous of the British leader and of his rhetorical abilities, and as time passed he seemed to wish to demonstrate that he could manage Stalin better than Churchill could. It was his desire to persuade the Soviet leader to join the war against Japan and ultimately to become a member of the United Nations, but his characteristic habit of procrastination prevented him from investing much energy on these issues. Churchill, who always understood Stalin better than the American leader, was intent on securing a modus vivendi with the Soviets that would secure Poland and the states of southeast Europe from direct and brutal domination, but was unable to inspire any American interest.

Even on purely strategical issues the differences between Churchill and the Americans were profound. In the last stage of the war, as the Allied armies were racing eastward, Churchill saw the possibility and advisability of entering Prague and Berlin before the Soviets did. This came to nothing when he learned that, without informing or consulting him beforehand, the Allied commander in chief, Dwight D. Eisenhower, had written directly to Stalin and informed him that the cities in question would not be objectives for the western armies.

This episode repeated itself in different circumstances in 1953, after Stalin was dead and Eisenhower had become president of the United States. Churchill felt it important to determine whether the new Malenkov government in Moscow was interested in consulting on steps to alleviate the conditions that had led to the divided Europe that he himself had described in his speech at Fulton, Missouri, in 1946. He found it impossible to persuade the new president to go along. Perhaps under the influence of his secretary of state, John Foster Dulles, Eisenhower appeared to have acquired a contempt for Churchill, who he privately suggested was becoming “senile.” In the end, to the President’s annoyance, Churchill made his démarche in Moscow alone, without, however, attaining conspicuous results.

Churchill was a prolific writer, astonishingly so given the rigors of his public career. He wrote and published five books (one of them a novel) within three years, before he was twenty-six, and his later works included a two-volume life of his father, Randolph Churchill, that focused on his parliamentary career, a four-volume study of his ancestor the Earl of Marlborough, and multivolumed histories of the First and Second World Wars. Influenced by Gibbon and Macaulay but not emulating them, he could write with a vivacity that inspired his readers to debate seriously over which was his best book, the leading contenders perhaps being My Early Life: A Roving Commission (1930) and The Gathering Storm (1948), the first volume of his history of the Second World War. Yet the fact that he was often contentious in his judgments, as in what Lukacs calls his “vindictive campaign” against Macaulay in his Marlborough volumes and his “unbalanced and unfair” description of Stanley Baldwin in The Gathering Storm, must diminish his stature as a historical writer.

Yet in the strictest sense of the word Churchill was never a historian, although history was the theme of all his works. Clio, as Maurice Ashley has written, is a demanding mistress who requires a lot of service. Churchill, he wrote, “had neither the time or the inclination to absorb himself in it completely or to revise his work in detail in the light of later knowledge. He preferred to make history rather than write it.” This is fair enough. No one who remembers his services to democracy between 1940 and 1945 will see any reason to complain.

In a brilliant analysis of Winston Churchill’s language in his new book on post-Churchillian Britain, David Cannadine reminds us that “for much of his career, Churchill’s oratory was far more important and interesting to himself than it was to the…British people in general, and that he was often rude and vituperative, bullying and overbearing, apocalyptic and irresponsible.” It was the threat of Adolf Hitler that inspired his better side and led to the great speeches that Cannadine calls “the Periclean peaks of 1940.” Between May and December 1940, Cannadine writes, “Churchill talked his way to immortality, and as these magnificently defiant words were soon accompanied by equally defiant deeds, they acquired an iconic status and historic significance they have retained to this day.”

It was after 1945 that things began to go wrong, and when they did he was inclined to see this as the fault of his successors. In an attack upon the Labour Party in 1951, he blamed it for “the greatest fall in the rank and stature of Britain in the world [that] has occurred since the loss of the American colonies two hundred years ago.” Yet the woes of which he complained—the loss of the Indian empire, the depreciation of the currency, the pronounced decline of the economy—were too complicated in origin to be blamed on individuals and parties. As Cannadine points out, Churchill—like Joseph Chamberlain before him and Margaret Thatcher after him—was a statesman in an age of decline. He could defy the conditions of his age but not change them. From 1930 onward, Cannadine writes, Churchill had devoted himself single-mindedly and wholeheartedly to the maintenance of the enduring greatness of Britain and her empire. When he died in 1965 those causes had become lost causes, and his magnificent state funeral was also a requiem for Britain as a great power. 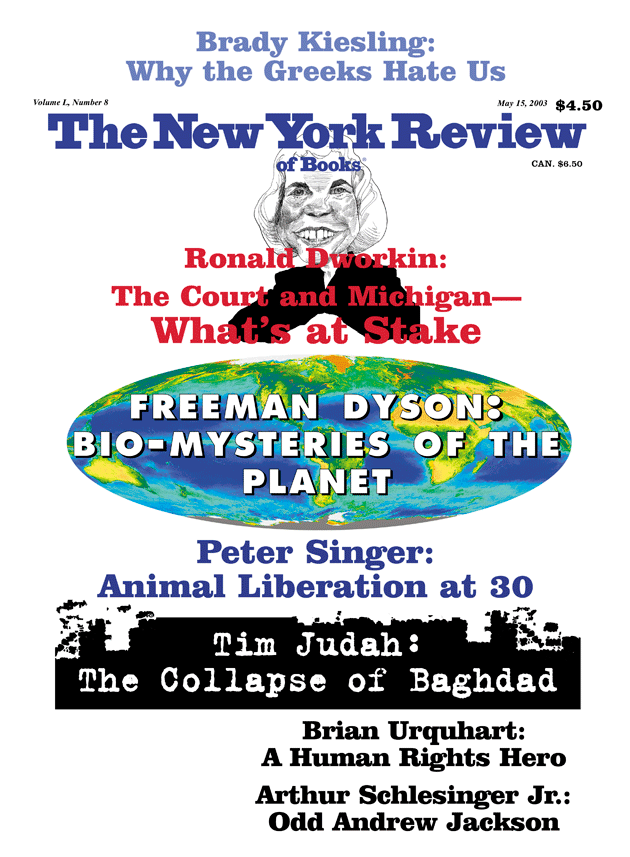 Gordon A. Craig (1913–2005) was a Scottish-American historian of Germany. He taught at both Princeton and Stanford, where he was named the J.E. Wallace Sterling Professor of Humanities in 1979.